Cystatin C (CysC)-induced autophagy may play a beneficial role in preventing subarachnoid hemorrhage-induced cerebral vasospasm. The role of CysC in endothelial cells (ECs) autophagy is unknown. This study explores the role of CysC during the process of oxidative stress in human umbilical vein endothelial cells (HUVECs). Oxidized LDL (oxLDL) was used to stimulate HUVECs in vitro study. The lactate dehydrogenase (LDH) release and malondialdehyde (MDA) level were assayed. Western blot is used to detect the expression levels of LC3 and P62. The present study demonstrated that LDH release and MDA levels increased after oxLDL exposure, however, CysC and NAC (N-acetyl-cysteine) decreased LDH release and MDA levels induced by oxLDL. The difference was a statistically significant amount (P<0.05). Additionally, compared with oxLDL group, CysC increased LC3II expression and alleviated P62 expression in CysC+oxLDL group (P<0.05). The results of the present study suggested that CysC protects against oxidative stress injury through activating autophagy in HUVECs.

Oxidative stress is caused by excess production of reactive oxygen species (ROS) and the imbalance of oxidative/antioxidative defense mechanism in vivo, which leads to the excessive accumulation of ROS and related metabolites, subsequently, cell damage and even death (Sugimoto, 2004). There is a close relationship between the formation of atherosclerosis (AS) and the injury of endothelial cells, and some studies have suggested that oxidative stress can activate autophagy to regulate endothelial cell function.

CysC, also known as the cysteine protease inhibitor C, is a major inhibitor of endogenous cysteine proteases. At present, all of the nuclear cells produce CysC, which can predict the sensitivity of renal damage (Rakkolainen and Vuola, 2016; Devarajan, 2011). Combined detection of CysC and urinary albumin could be advantageous for early diagnosis of hypertensive renal damage (Vandecasteele and De Vriese, 2013; Wang et al., 2014). Studies show that CysC is closely associated with cardiovascular events which is expected to become a biomarker to predict clinical cardiovascular events and matrix metal protease; also, serine proteases and lysosomal cysteine proteases are involved the formation of As (Bengtsson et al., 2008; Liu, 2004).

The present study was designed to investigate whether CysC exerts protective effects against oxLDL-induced damage and whether oxLDL exposure has detrimental effects on HUVECs autophagy in vitro.

Protein samples were obtained from homogenized cultured cells, and the protein concentration was determined. Protein samples were separated by SDS-PAGE, transferred to a PVDF membrane and blocked with TBS containing 0.05% Tween-20 (TBST) and 5% non-fat milk powder for 4 h. The membranes were then incubated with appropriate primary antibodies overnight at 4°C. After three washes with TBST, membranes were incubated with secondary antibodies for 1 h at room temperature. Electrophoresis and immunoblotting were employed as described previously. In this experiment, anti-SQSTM1/P62 antibody, anti-LC3B antibody and anti-beta III tubulin were purchased from Abcam Company. Polyvinylidene Fluoride (PVDF) membrane was  purchased  from Millipore Company. Lactate dehydrogenase (LDH) and malondialdehyde (MDA) assay kits were purchased from Jiancheng Company of Nanjing.

All the results are expressed as mean±SEM. Statistical analyses were performed with the Graphpad Prism V.5 software using the Student’s t-test. Significance was taken as P<0.05. 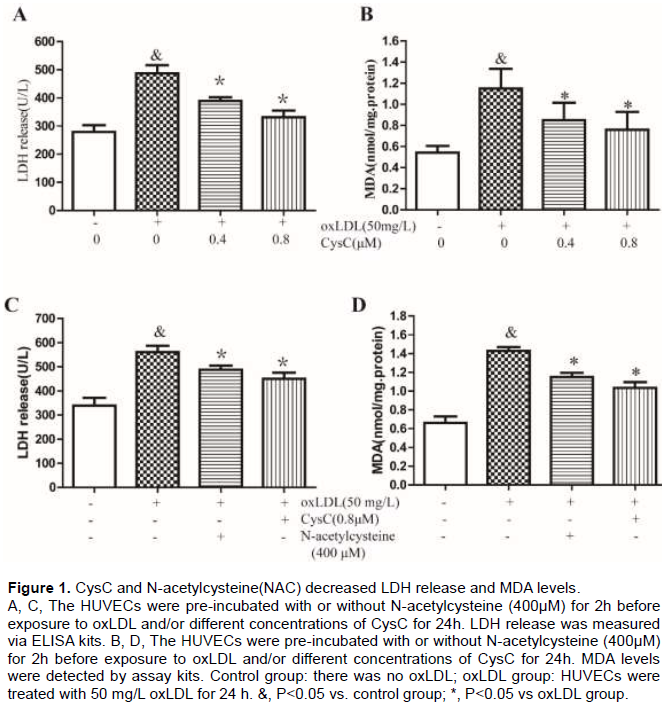 In order to clarify the preliminary mechanism of the protective role of CysC on oxidative stress injury, we detect the change of autophagy during CysC treatment in HUVECs. The results indicated that LCII/LCI expression increased while p62 expression decreased after treatment with 50 mg/L oxLDL for 24 h. Additionally, compared with oxLDL group, CysC increased LC3 expression and alleviated P62 expression (Figure 2, P<0.05). Thus, it can be said that CysC injury activates autophagy during oxidative stress in HUVECs. 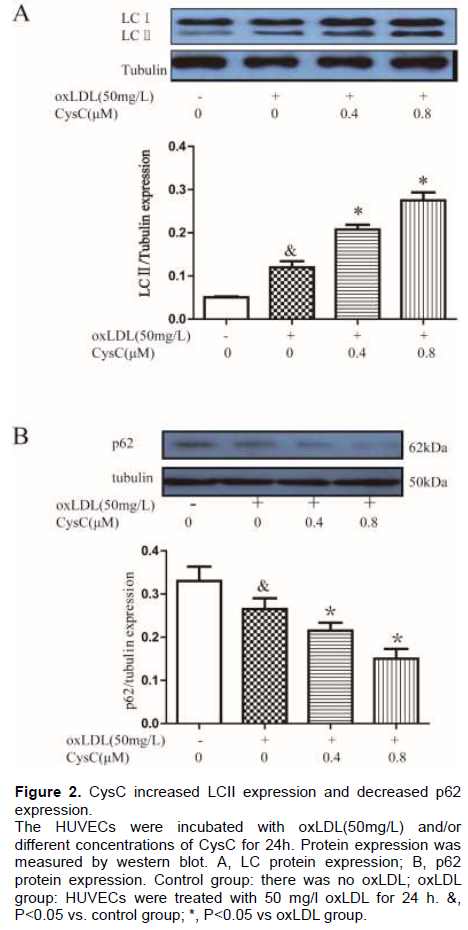 Autophagy is a cellular process that transports the damaged, degenerative or aging protein and its damaged organelles into the lysosome to precede the degradation; it is also a normal physiological process that widely exists in the body. The appropriate level of autophagy protects the cells from damages, but the excessive autophagy or autophagy defects could be a potential risk of diseases (De Meyer and Martinet, 2009; Lavandero, 2013). The interaction between blood vessels and blood that appears in the blood vessel endothelium, and the damage of vascular endothelial cell is the initial stage of the development of AS. Multiple risk factors that lead to AS may affect the autophagy of vascular endothelial cell and adjust the development process of AS. The oxLDL promotes the development process of AS by several means of promoting lipid accumulation and inflammatory response, which could be an independent risk factor  of leading AS (Mahmoudi, 2016).

In recent years, studies have indicated that the matrix metalloproteinases, serine proteases and lysosomal cysteine proteases are involved in the formation of AS (Bengtsson et al., 2008; Liu, 2004. Expression of elastase and collagenase was significantly increased, and the expression of CysC decreased in atherosclerotic lesions of humans and in ApoE-/- mice (Liu, 2004; Sukhova et al., 1998; Eriksson et al., 2004). Damage of AS and dilatation of aortic were more severe in ApoE-/-CysC-/- mice compared with CysC-/- mice (Eriksson et al., 2004; Bengtsson, 2005; Huh,  1999).  Hematopoietic or  non- hematopoietic cells derived from CysC+/+ mice were planted into bone marrow of ApoE-/-CysC-/- homozygous mice improved damage of AS (Bengtsson, 2005). These studies indicate that CysC obviously inhibits AS formation. Our present studies indicated that cystatin C protects against oxidative stress injury through decreasing LDH release and MDA level, and activating autophagy in HUVECs (Figures 1 and 2). Watanabe (2014) found that CysC protects neuronal cells against mutant copper-zinc superoxide dismutase- mediated toxicity by induction  of autophagy. Li et al. (2016) results indicated that CysC deficiency is associated with dysfunctional autophagy in macrophages. Thus, autophagy activity is positively associated with CysC expression. This study finding raises the possibility that CysC expression and effective autophagy activity may serve as a safeguard in combating oxidized lipid- mediated cytotoxicity in endothelial cells. The findings call for further studies on autophagy and CysC in AS.