International Journal of
Nutrition and Metabolism

Diabetes mellitus (DM) is a metabolic disorder characterized by chronic hyperglycemia due to  defects in insulin secretion, insulin action, or both, effects of diabetes  mellitus  include long-term damage, dysfunction and failure of various organs. DM may present with characteristic symptoms such as thirst, polyuria, blurring of vision, and weight loss. In its most severe forms, ketoacidosis or a non-ketotic hyperosmolar state may develop and lead to stupor, coma and, in absence of effective treatment, death (Yigazu and Desse, 2017).

Type 2 diabetes constitutes about 85 to 95% of all diabetes. American diabetic Association (ADA) and International Diabetes Federation (IDF) estimated about 19.8 million adults were estimated to have diabetes in Africa and regional prevalence of DM is 4.9%. Out of this more than 50% lives in four highly populated countries namely: Nigeria, South Africa, Ethiopia and Tanzania, it is estimated that 439 million people would have type 2 DM by the year 2030; ageing populations, increasing urbanization, reduced physical activity and Chronic consumption of high energy, high fat diets and behavioral patterns plays critical role in the incidence of this medical problem (World Health Organization, 2016; Ogurtsova et al., 2017; Al-hayek et al., 2012).

It has been shown that hyperglycemia enhances free radical production, inducing oxidative damage, which in its turn activates the death pathways implicated in cell apoptosis and necrosis. Extant literatures have demonstrated that intermittent high glucose is more dangerous than constant high glucose medium for human umbilical vein endothelial cells (HUVECs) in culture, because in the former condition there was a marked increase in cellular apoptosis. These findings suggest that variability in glycemic control could be more deleterious to HUVECs than a constant high concentration of glucose (Tanaka et al., 1999; Risso et al., 2001).

Presence of macro- and micro vascular complications in patients with diabetes mellitus (DM) is not only related to chronic hyperglycemia represented by glycated hemoglobin (HbA1c) but also to acute glycemic fluctuations (Caprnda et al., 2017). A1C reflects, average blood glucose concentrations over a prolonged period of time; it does not provide much information on the prevalence and amplitude of hyperglycemic blood glucose excursions experienced through short period of time. Intermittent high blood glucose exposure rather than constant high blood glucose exposure has been shown to have deleterious effect in experimental studies (Quagliaro et al., 2003; Piconi et al., 2006). Such information is highly relevant because acute hyperglycemic episodes have been associated with the development of diabetes complications independent from A1C levels, In addition, the level of glycemic variability, which reflects the frequency and amplitude of upward and downward blood glucose excursions throughout the day, has recently been implicated in the development of diabetes complications (Jan-Willem VD and van -Loon JL, 2015; James BM et al., 2002).

Significance of the study

Institution based cross sectional study was conducted from March 19 to May 19, 2018, in Ilu Abba Bora Zone of Oromia Region,south western Ethiopia. Metu Town is the administrative center of the zone which is 600 km south west of Addis Ababa. The study was conducted in two governmental hospitals (Metu Karl Referral Hospital and Darimu Hospital) both gives follow up care for diabetic and NCD patients.

Sample size was separately calculated for the outcome (Gycemic control) and for each associated factors using previously published parameters and the largest sample size was taken using the assumption of 50% poor glycemic level which was reported in a study conducted another part of Ethiopia (Minyahil A et al., 2014) 95% level of confidence (α), 80% power (ß) and 10% non-response rate, the final sample size was 422. The final sample size was allocated proportionally to two hospitals based on their number of diabetic patients on follow-up accordingly 756 and 338 patients were in a regular follow-up in MKRH and darimu hospital respectively accordingly 291 and 132 patients were proportionally taken from Metukarl hospital and Darimu Hospital respectively. Finally study participants were selected using systematic random sampling technique.

Data were cleaned, edited, coded and entered to Epi data version 3.1 and was exported to SPSS windows version 20 for analysis. Exploratory data analysis and Descriptive statistics including proportion, percentage, ratios, frequency distribution, mean and standard deviation was used to describe the data. Wealth index was constructed using the principal component analysis(PCA) form 27 items after checking all assumptions. Bivariate logistic regression analysis were done to see the association between individual explanatory and outcome variables; variables with P-value <0.25 were a candidate for multi variable logistic regression. Odds ratio with 95% C.I was used to measure the strength of association between dependent and independent variables. P value <0.05 was used to declare level of statistical significance.
The scores of each diabetic health belief construct were summed up, to come up with a single scoring for each construct, for every respondent. Participants were labeled to have high  or  low  level  of individual constructs based on correct response of mean value as a cutoff, social support scores of every respondent  were also summed up. Participants were labeled to have poor or good social support based on mean value.  Dietary adherence status score was computed by taking the mean values of 12 questions assessing patients’ dietary recommendation adherence.

Ethical clearance and permission were obtained from the Research Review Board of Jimma University and offered to illuababor zone Health office and respectivehospital administrative officials, information about the objective of the study, confidentiality, autonomy and justice were explained for the participants during data collection. Informed verbal consent was obtained from each study participant.

In the current study, FBS measured during the last follow up visit was considered as recent glycemic control.

A person who has reached 18 years old.

This refers to the recommended diet for people with DM who should eat small meals spread throughout the day (at least 5/day), eat fruits and vegetables daily, and eat foods high in fibers and whole grain but low in fats, sugars and carbohydrates that have high glycemic index (30).

These are those who scored the mean and above the overall dietary recommendation score.

These are those who scored below the overall mean dietary recommendation score.

These are those who scored less than 600 METs per week based on the GPAQ incorporated scoring mechanism (World Health Organization, 2009).

These are those who scored greater than 600 METs per week based on the GPAQ incorporated scoring mechanism (World Health Organization, 2009). 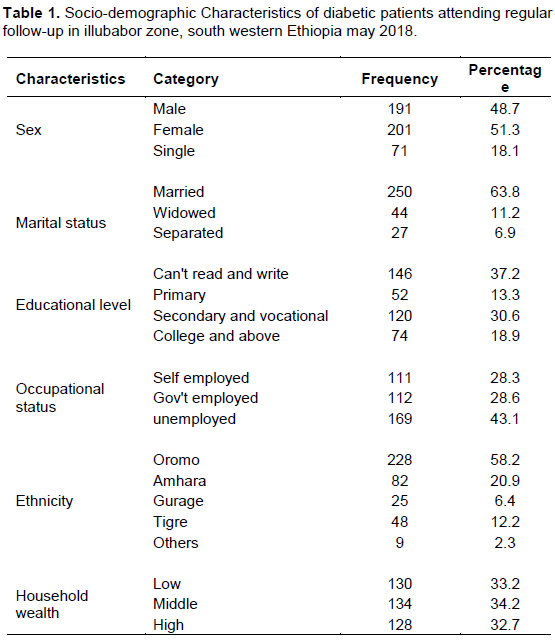 The mean illness duration since diagnosis was 6.9 (SD±5.3) years. One hundred and eighty two (46.4%) patients reported that they had family history of DM and nearly half of the respondents (46.9%) had additional co-morbidity. More than half of patients (52.3%) used oral hypoglycemic agent. One hundred and sixty nine (43.1%) of patients never missed their diabetic follow up appointment in the past three month. Additionally more than one fourth of participants, 105 (26.8%) reported that they did not attend diabetic education while 47 (12%) attended regularly. In the current study, one fourth (25.5%) of diabetic patients were member of Ethiopian diabetic association, the mean BMI was 27 (SD±13) and 44.1% of respondents had normal BMI while 19.6% of respondents were obese. Furthermore 62 (17.3%) of the respondents had abdominal obesity (Table 2 and Figure 1). 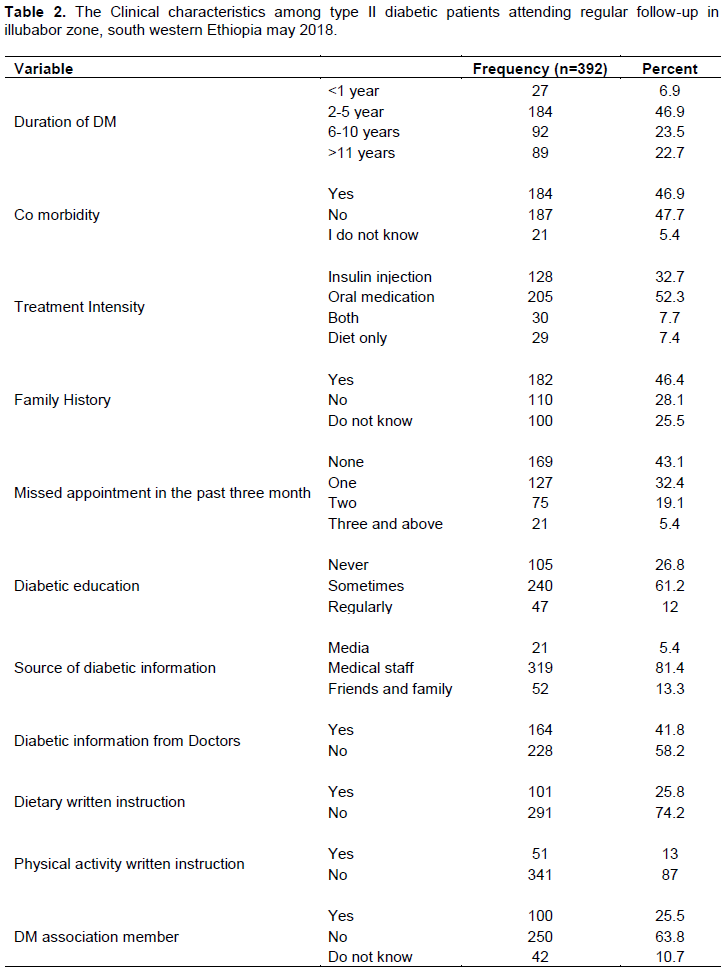 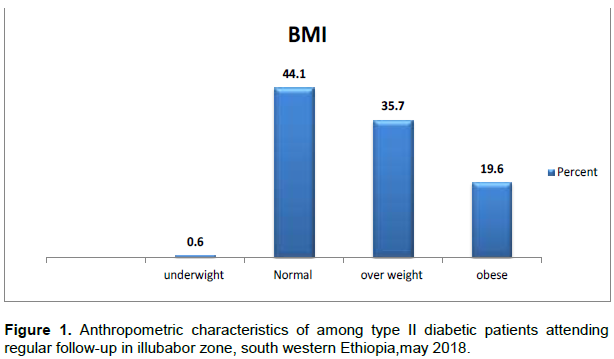 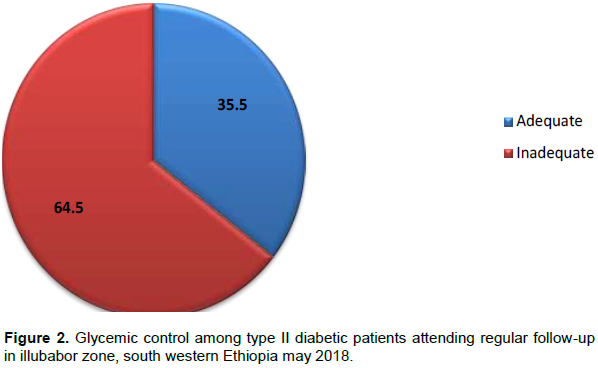 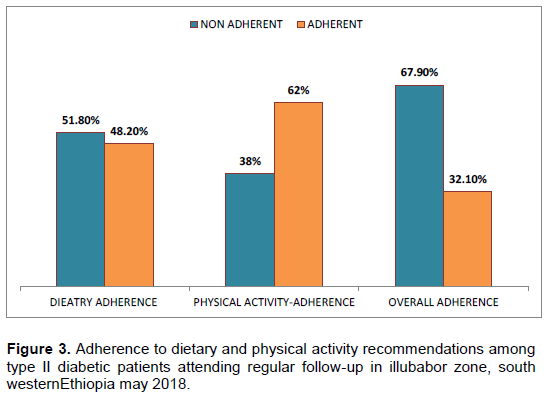 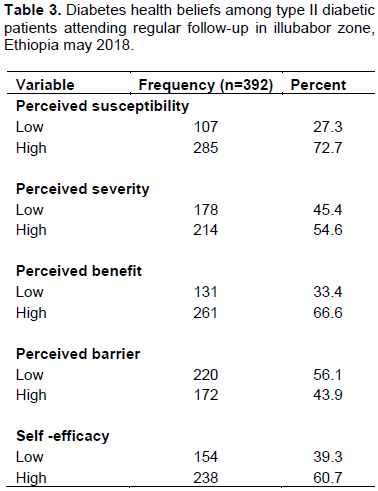 This study also reported higher dietary and physical activity non adherence, and this could be one of the possible justification for the high proportion of poor glycemic control, on the other hand the result is comparable with a study finding from Gonder (Solomon et al., 2015), however  the finding is lower than findings from Tikurambesa, Malysiaand India (Ababa et al., 2018; Almutairi et al., 2013; Gopinath et al., 2013) and higher than a finding from northern Ethiopia, Mekelle, which reported 48.7% had poor glycemic control (Tadele et al., 2016), the discrepancy might arise fromin socio-cultural, economic and dietary consumption difference among study populations, in addition the variation might be due different blood glucose measurement modality used. In this study, fasting blood sugar was used to monitor patient’s blood glucose level while most of referenced studies used glycated hemoglobin, furthermore the variation might arise from difference in level of urbanization between conducted comparatively in less urbanized area. It is well known that urbanization is commonly associated with motorized way of life and unhealthy eating pattern like consumption of ready-to-eat food products containing high levels of salt, sugar and fat (Tadele et al., 2016), which are the common factors adversely affect patients glycemic control.

In the current study patients occupational status was found to be an independent predictor of patients Glycemic control, the result is in line with finding from Jimma University Teaching Hospital, which also indicated a positive correlation between patient’s occupational status and glycemic control. The observed association might be due to low educational achievements among unemployed patient’s; it is known that education offers opportunity to learn more about health generally and glycemic control particularly. Likewise, the result is also supported by low economic level of unemployed patients which directly interfere with patients capacity to afford medicine and strictly follow healthy dietary and physical activity recommendations.

The present study point out that patients who know their family diabetic history were found to less likely to have poor glycemic control; the result is incoherent with the study done in Saudi Arabia and Malaysia; both reported significantly higher proportion of poorly glycemic control among patients who know their family history of diabetes (Almutairi  et   al.,   2013;   Riyadh    and  Alzaheb, 2018); the disagreement might arise from the possible lifestyle and family attachment difference between study setups. In the current study area, family members commonly lived in a common shelter and there was also a strong social attachment which facilitates exchange of health information between family members, in view of the fact that diabetic self-care is a continuous activity, it’s likely for other family members to gain diabetic self-care knowledge’s.

This study also revealed that presence of other co morbidities was associated with poor glycemic control; the association can be explained by the possible effect of co-morbidities in precipitating hyperglycemia among diabetic patients, likewise the result might also be due to likely diversion of patient’s attention from the routine diabetic self-care to management of acute co–morbidities symptoms, which likely impose adverse economic,  psychological   and  physical  pressure which likely had undesirable effect on patients adherence towards health recommendations and later leads to inadequate glycemic control.

In this study, adherence to physical activity recommendation was found to be an independent predictor of diabetic patients Acute glycemic control. The result is similar with the study conducted in Tepi (southern Ethiopia) (Biru, 2017); Netherlands (Jan-Willem VD and Luc JCV , 2015) and Yemen (Rita de Cássia, 2011). A healthy lifestyle with regular physical activity are very important tools in reaching and maintaining an adequate glycemic control in patients with diabetes. The benefits of exercise for glycemic control are largely explained by an increase in whole-body insulin sensitivity furthermore exercise also lowered glycemic variability throughout the day, indicating a decline in the frequency and/or amplitude of glucose fluctuations.

Although  this  study  provides basic information addressing knowledge gap, institutional based nature of the study might not infer for other diabetic patients. The cross-sectional nature of thestudy design does not show temporal relationship or causality, additionally in this study, contrary to scientific plausibility, diabetic health belief and patients dietary adherence were not found tobe predictors of patients glycemic level, this might  arise from sample size, study design used and some biases in particular recall and social desirability bias.

The study found that majority (64.5%) of diabetic patients had poor glycemic control. Occupational status of patients, family diabetic history, co-morbidities, and physical activity adherence was found to be independently associated with patient’s glycemic control level. Therefore early identification and management of co-morbidities should get due attention during regular diabetic follow up sessions and Health professionals should give due attention and take sufficient time while delivering information’s about physical activity recommendations.

The authors would like to thank study participants and staffs who are working in the respective unit for their kind support.