International Journal of
Nutrition and Metabolism

The change in appetite and food cravings before, during and after menstruation and the relationships between each premenstrual symptom and change in appetite and type of food with increased intake were investigated. This study was conducted by a self-administered questionnaire in 311 female students of health sciences. It was found that the proportion of students who increased the appetite was 70.4% during the menstruation cycle, and the highest period was before menstruation (85.8%). Sweets had the highest intake in all menstrual phases followed by junk food. It was found that increased appetite was significantly associated with depression and sleepiness. Moreover, increased intake of sweets was associated with depression, anger and sleepiness, while intake of junk food was associated with irritability and depression. In conclusion, the relationships between increased appetite for sweets and junk food and premenstrual symptoms indicate the need for promoting proper menstruation-related eating habits.

According to the hormone phase of the menstruation, the progesterone effect to increase appetite and food intake in the presence of estrogen has been reported (Hirschberg, 2012). A high prevalence of symptoms related to increased appetite along with other common premenstrual symptoms was found in some studies. A study in 18-44-year-old women in the USA showed that there were significant increases in appetite, craving for chocolate and sweets in general, and craving for a salty flavor during the late luteal phase (Gorczyca et al., 2015). In Brazil, it was shown that the desire for foods rich in sugar, salt and fat was increased during the premenstrual period among university students (Souza et al., 2018). In Japan, 98% of nursing university students (mean age: 20.1 years) reported a desire for sweets and overeating as well as irritability and depression as the most frequent symptoms (Fukuoka et al., 2017). Another study showed that 64.6% of high school students aged 15-19 years suffered from premenstrual symptoms and that the prevalences of anxiety/tension, anger/irritability, and overeating/food cravings were high (Takeda et al., 2010).

Few studies have been focused on eating habits as risk factors for aggravation of premenstrual symptoms. It was shown that bad eating habits such as fast food consumption increased the risk for premenstrual syndrome (PMS) among Turkish students (Isik et al., 2016). In Japan, a study showed that dietary fat may be associated with premenstrual symptoms (Nagata et al., 2004). Relationships of sweets containing refined sugar with PMS have also been reported. The desire to eat highly sweet foods and sweet-food cravings during the late-luteal phase of the menstrual cycle were increased in women with PMDD (Yen et al., 2018). However, there has been a limited number of studies on the transition of symptoms related to increased appetite during the menstruation cycle. Moreover, little is known about the interrelations between increased appetite and other premenstrual symptoms. The objective of this study was to investigate the change in appetite and food cravings before, during and after menstruation and the relationships between each premenstrual symptom and change in appetite and type of food with increased intake.

This study was conducted between July and August in 2018. The subjects were 311 female students of the Faculty of Health Sciences, Tokushima University in Japan. Students for whom agreement for participation was obtained were asked to complete a questionnaire after explanation of the study at the end of a lecture, and questionnaires were collected on the same day. The questionnaire forms were anonymous and sufficient consideration was given to private information. We followed “Ethical Guidelines for Medical and Health Research Involving Human Subjects” of  the Tokushima University and the study was approved by the Ethics Committee of Tokushima University Hospital (approval number: 3200).

A self-administered questionnaire was designed by the researchers. The first part of the questionnaire consisted of the demographic characteristics such as age, body height and weight, presence of menstrual cramp and stress. The second part consisted of self-assessment of premenstrual symptoms such as irritability, depression, anger, headache, heaviness in head, vertigo, sleepiness, superficial sleep, breast pain, breast tenderness, edema and anxiety. Symptoms were those that occurred 3 to 10 days before menstruation, during menstruation, and 2 to 5 days after menstruation for 2 or 3 consecutive recent menstrual cycles. The items were rated on a scale from 0 to 10 points with 0 points indicating no symptom and 10 points indicating severest symptoms. The third part consisted of questions related to changes in appetite and food intake: increased appetite, period when the appetite increased, type of foods (junk food such as snacks, sweets, salty food, fatty food, meats, fish, spicy food, bitter food, carbohydrates, instant food, fast food and fruits) with increased intake.

Demographic characteristics of the subjects

Prevalence of premenstrual symptoms in three periods of the menstrual cycle

Change in appetite and food cravings before, during and after menstruation 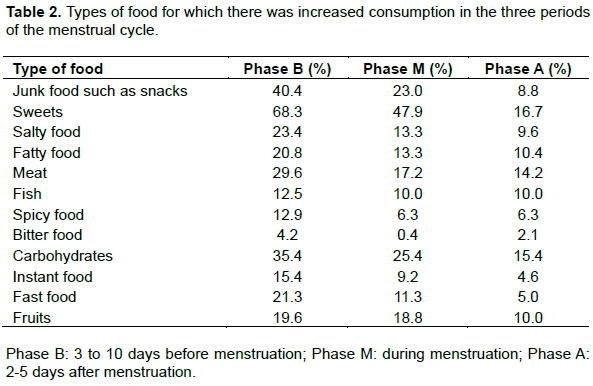 It was found that sweets had higher intake than that of other types of food in all menstrual phases. These results are similar to results of previous studies for increase in appetite (Gorczyca et al., 2015) and craving for sweets (Souza et al., 2018). We found significant associations of increased intake of sweets with depression, anger and sleepiness, being consistent with the results of a previous study showing that intake of sweets is linked with depressive symptoms (Knuppel et al., 2017). A previous study showing that impulsivity and irritability in women with premenstrual dysphoric disorder (PMDD) during the late luteal phase are associated with increased desire to eat sweet foods rather than fatty and salty foods to alleviate their symptoms (Yen et al., 2018), however we could not find a significant association between increased intake of sweets and irritability.

Increased consumption of junk food and carbohydrates were also found in this study. Junk food, which contains high contents of fat and salt, had the second-highest frequency of intake in Phase B and the third-highest frequency of intake in Phase M, but its intake was drastically decreased in Phase A. We found that irritability and depression were associated with intake of junk food. A study in Korea showed that stress and depression could aggravate by consumption of junk food among adolescence (Park et al., 2016).

Eating a meal typically reduces arousal and irritability and increases calmness and has a positive effect (Gibson, 2006). In the present study, we found significant associations of depression, anger, and sleepiness with increased appetite. There was no significant association of irritability or superficial sleep with increased appetite, and more data will be needed in the future to explain this result.

Over the past several decades in Japan, eating habits become more westernized with increasing consumption of meat, animal fat, high-sugar and low-fibre foods. An increase in sodium intake and water retention when eating salty junk food might cause physiological symptoms such as headache, increase in body weight and edema. Promoting awareness of appropriate eating habits, including reduced consumption of salty snacks and junk food, may lead to an improvement in physical premenstrual symptoms (Tadakawa et al., 2016).

Strong cravings for sweets and junk food before menstruation and bad eating habits may cause an increase in body weight and may increase the risk of lifestyle-related diseases. Although long-term prospective studies have not been carried out, we speculate that bad eating habits when young may lead to increased lifestyle-related diseases such as diabetes and hypertension at an older age. The prevalence of common psychological symptoms such as irritability, depression and anger before menstruation in the present study were similar to those previously reported in Japan (Takeda et al., 2006; Fukuoka et al., 2017). However, the prevalence of these symptoms may be different depending on the study conditions. A study conducted in China showed a high prevalence of irritability (91%) in women aged 18-45 years (Qiao et al., 2012), while another study in Spain showed a much lower prevalence of irritability (58%) in women aged 15-49 years (Duenas et al., 2011). Little is known about the transition of symptoms before, during and after menstruation. With regard to the transition of psychological symptoms in this study, we found that the prevalence of all symptoms decreased significantly from Phase M to Phase A.

This study has several limitations. Since this study has a cross-sectional nature, there is not sufficient evidence to make a confirmative conclusion. The subjects in the present study were students who have basic health knowledge. The contents regarding menstrual regularity and medication history such as taking contraceptive pills and antidepressants were not included in the questionnaire. The degree of appetite and sugar in sweets also needs to be standardized. A  future study needs to target various kinds of students or women of various ages.

The authors extend their thanks to the students who participated in this study.