Demographic and personal correlates of â€˜new masculinitiesâ€™: Focus on the role of emotional intelligence

This research aims to gain a better understanding of a popular term in gender-talk, using a quantitative approach. It proposes a working definition of ‘new masculinities’ and explores some of its antecedents, paying special attention to the concept of emotional intelligence (EI). Given the lack of empirical research on the nature of ‘new masculinities’ and its components this study is based on a selection of proxy measures associated with its core characteristics, described in the literature. We proposed that adoption of egalitarian gender role attitudes, low levels of sexism, low conformity to traditional masculine norms and a tendency toward androgyny, may represent the concept effectively. In search of potential correlates of new masculinity we hypothesized that EI will positively associate with measures of new masculinities even after controlling for background variables known to interact with gender role attitudes (e.g.: age and education). Two hundred and fifteen men sampled from educational and work settings in northern Israel filled out measures of the above- detailed variables. Structural equation modeling analysis demonstrated that: a) The proxy measures converged on a single factor, suggesting they represent a single essence we call ‘new masculinities’ and (b) EI associated with the latent factor representing ‘new masculinities’, as did age. The potential implications of our findings are discussed. 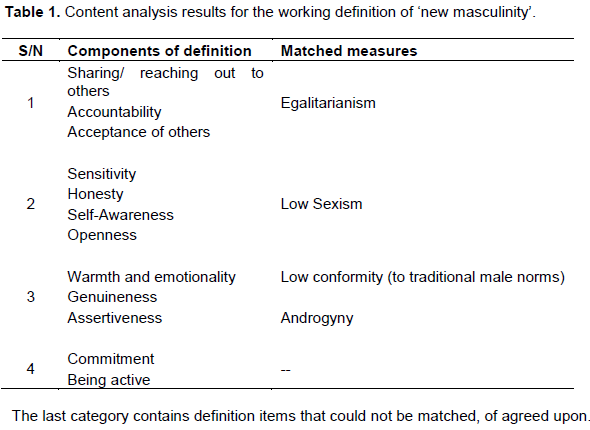 The final pattern to operationalize new masculinities included: Adoption of egalitarian gender role attitudes, low levels of sexism (which is the tendency to discriminate and negatively judge persons based on their gender, see: Glick and Fiske, 1996), low conformity to traditional masculine norms and a tendency toward androgyny. We hypothesized all shared a common core quality (that is: converge into a single common factor) – representing a core of a coherent perception of ‘new masculinities’ in the individuals’ own perception.
In exploring the potential correlates of this proposed pattern, we were specifically interested in the potential role of EI as a correlate of ‘new masculinities’ patterns, and we examined it alongside other personal attributes already established in the literature as correlates of gender role formation and change: age and marital status (to accommodate for developmental changes), religiosity (as a major cultural aspect related to gender role definitions), and SES (education and income).
As mentioned above EI, by definition, reflects individuals’ ability to identify, process and regulate emotions in self and others in a manner that is effective and goal oriented (Zysberg and Tell, 2013). It is easy to identify commonalities between this definition and some of the aspects of ‘new masculinity’ behavior patterns (e.g.: broad emotional range, expressiveness, acceptance of others, etc.). Therefore on the theoretical model (based on the literature on EI and the literature on ‘new masculinities’) it is reasonable to expect an association between the two. As described above, only meager evidence links EI with gender role patterns, but it generally supports the direction proposed here (Guastello and Guastello, 2003).
We therefore hypothesized that EI will associate with higher egalitarianism, lower sexism, lower conformity to traditional male norms and higher levels of androgyny, even after controlling for background variables. Data was obtained from a sample of heterosexual, adult men working or attending college in Northern Israel.To allow testing of this model we utilized Structural Equation Modeling technique (SEM: Ullman and Bentler, 2013).

Sample
We used a snowball sampling method to recruit 215 participants, all heterosexual   males,    residing    in    Israel,    either    working    or attending College. Ages ranged between 19-81 (mean=38.29; sd= 15.20). A little over half (55.4%) were undergraduate students and the rest were community dwelling adults, of which about 34% reported working full time and the remaining 10.6% reported working part time. Since Israeli students are typically older than their counterparts in the US and the EU, we reached a near-normal age distribution. About half (47.4%) were single, 48.8% were married or living with a partner and the remaining 3.8% were divorced, separated or widowers. The vast majority (95%) were Jewish, about 3% were Muslim and about 2% were Christian.
Measures
Conformity to masculine norms
The Conformity to Masculine Norms Inventory-46 (Parent and Moradi, 2009), a shortened form of the Conformity to Masculine Norms Inventory (CMNI; Mahalik et al., 2003) was used in this study. Forty-six items such as “I never share my feelings” or “it bothers me when I have to ask for help” are intended to assess traditional male gender-role conformity. Items are answered on a 4-point Likert scale, ranging from 0 = strongly disagree to 3 = strongly agree. Higher scores reflect higher conformity to masculine norms. Cronbach’s Alpha coefficient for the full scale in our study was 0.92.
Androgyny
The degree to which participants defined themselves in flexible, non-stereotypical gender roles terms was assessed based on the Bem Sex Role Inventory (BSRI), a veteran measure of gender role adoption as a part of one’s identity or personality (Bem, 1974). The scale includes 60 attributes (e.g.: “gullible” or “forceful”) that represent traditional masculine’ feminine and non-gender-specific aspects of self. Each is rated on a 7 point Likert scale, 1= never or almost never true of me, through 7- always or almost always true of me. The scale enjoys a bulk of research supporting its reliability and validity in various settings (Holt and Ellis, 1998). In our analysis we used only the androgyny score. Cronbach’s Alpha in our study was 0.77.
Attitudes towards gender-role equality
King and King's (1997) scale of gender role egalitarianism was used. This is a well-established and psychometrically sound scale, with Cronbach’s Alpha of around 0.90 (and 0.87 in the current study). Items include
statements such as “the care of infants should be performed primarily by mothers” or “men should not be  expected to be responsible for domestic tasks”. Responses were rated on a 5-point scale from 1 (strongly disagree) to 5 (strongly agree), with higher scores indicating lower egalitarianism.
Sexism
Sexism was measured by the Ambivalent Sexism Inventory by Glick and Fiske (1996). Ambivalent sexism includes two separate but interrelated components: (1) hostile sexism (hs), which involves negative perceptions of women, and (2) benevolent sexism (bs), a chivalrous ideology that offers protection and affection to women who adopt conventional gender roles. Items included statements such as “When women lose fairly they claim discrimination” or “women seek special favors under the guise of equality”.
Responses are provided on a five-point Likert-type scale (1 = strongly  disagree  to  5  =   strongly   agree),   with   higher   scores reflecting greater sexism. The Cronbach’s Alpha coefficient of the scales is 0.85 - 0.92 (for the bs and hs subscales respectively). Since both subscales were highly correlated in our study we used a single total score in our analyses.
Emotional Intelligence (EI)
We assessed EI using the Schutte et al. (1998) EI questionnaire, which is a 33 item self-report instrument assessing individuals’ perceived ability to identify emotions, understand emotional situations and act to regulate emotion in self and others. A sample item is: “I know when I should talk about my emotions with others”. A Likert type response scale measures agreement with each statement, with lower scores reflecting higher EI. The questionnaire showed appropriate psychometric qualities in previous research (e.g.: Schutte et al., 2002).
Demographics
We asked participants to report non-identifying personal data such as age, status as students or workers, self-reported religiosity (single item), education and income bracket.
Procedure
The study received IRB approval before data collection initiated. Potential participants were approached personally, on and off campus or at work, as well as on-line, through email – using a referral system. Participants were offered a small monetary compensation for their time. Of the 250 persons contacted, 215 provided full responses allowing analysis. The rest either declined to participate or provided partial information. Following entry of the data to the data base, we deleted all details that could identify the participants (e.g.: email address or other contact info collected for dispensing the monetary compensation). We then analyzed our data using IBM/SPSS version 20.0 and AMOS 19.0 (IBM 2012).

We first examined the distribution of the study’s main measures. Descriptive statistics and zero-order Pearson correlations among the variable measures are presented in Table 2.

The statistics show the sample expressed relatively high level of egalitarianism, self-reported EI and androgyny, and moderate levels or sexism and conformity to masculine norms. This is to be expected given the nature of our sample, the implications of which will be discussed in our discussion section. The correlation patterns provide initial support to our hypothesis: Emotional intelligence associated with all ‘new masculinities’ proxy measures in accordance with our expectations.
We then proceeded to test our model: While analyzing the entire model using SEM in AMOS version 19.0 (IBM 2013), we first examined the output that practically added up to a confirmatory factor analysis of the proxy measures of ‘new masculinity’ (defining the proposed common factor), using maximum likelihood estimation method. Looking at the model summary focusing first on the factorial structure behind our proxy measures, the results showed support for a single factorial structure for Androgyny, Sexism, Egalitarianism and Conformity to masculine norms. Chi square was non-significant despite the large sample size at 0.49 (df=2; p=0.78); Other goodness of fit indices were at the excellent range (CFI>0.99; NFI=0.99; RMSEA=0.01). The most heavily loaded score was that of gender egalitarianism, followed by sexism. Androgyny showed the lowest level of loading although it too was within the acceptable range.
When examining the full model using EI alongside age, marital status (we did not have data regarding number of children if there were any), education level, income level, and religiosity as predictors of the latent factor of ‘new masculinities’, we found that the model was not a good fit to the data, and showed that education, marital status and income levels did not associate with ‘new masculinities’. We then dropped all three variables from the model, and achieved a good fit to the data. The final results for the model, including goodness-of-fit indices are summarized in Figure 1. 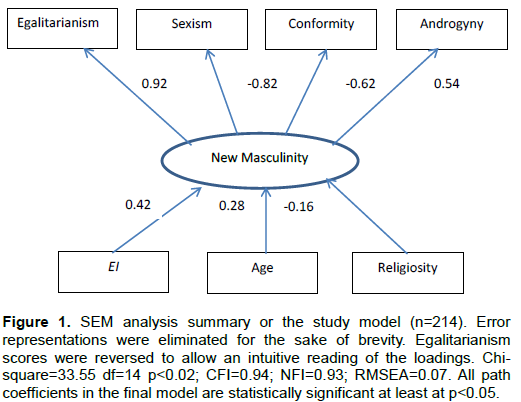