The paper focuses on the role of indigenous knowledge system in the quest for conflict resolution and sustainable peace building. The data were collected from key informants, in-depth interview, focus group discussion, and document analysis. To this end, purposive sampling is used to select the participants. The finding has revealed the existence of many local and community based customary practices and indigenous conflict resolution institutions. Among them is the Amare Council of Elders a well-known and formally recognized mediation and reconciliation mechanism to deal with range of conflicts from simple disputes to horrifying murder acts. There are customary practices and ritual cleansing ceremonies used by Amare in blood feud reconciliation and non-homicide. The prominent ways and modes that have been practiced by Amare conciliators in mediation and blood feud reconciliation include Bele (a kind of swearing to do or not to do something), Arami (a payment from murderer’s family to temporarily calm the issue until Guma will pay) and Guma (blood price during reconciliation). Nevertheless, from transformative peace building perspective, as per the finding currently Amare Shimglina is imperceptible due to the challenges emerged from the community, formal justice actors and conciliators themselves. As a result of these, the paper suggests the need to empowerment and up-keeping of indigenous knowledge systems of conflict resolution for developing comprehensive restorative justice mechanism in the study area.

In the field of conflict resolution and peace building, thorough understanding of the nature, dynamics and context of conflict occurrences should be the fundamental concern. Many contemporary violent conflicts across the world cannot be conceived merely as war but also characterized by a complex host of actors, issues and motives, which exists in extended families, tribes, ethno-linguistic and religious groups. Incidentally, understanding the nature of conflict is imperative to find out the most appropriate and feasible conflict resolution approaches (Mpangala, 2004). According to Zartman (2000), conflict can be prevented and managed in certain occasions but resolved only if parties pursue a compromise and non-zero-sum game results. Therefore, as Bukari (2013) argued, the biggest challenge facing human beings nowadays is not only about the occurrence of conflict per se but also the usage of desired resolution mechanisms. Conflict is an inevitable phenomenon ubiquitous in human society raised from incompatibility and differences of interests, goals and values for resources, ideas, perception, believes, power and status (Swanstrom, 2005; Wanende, 2013).
Indigenous conflict resolution mechanisms refers to the local approach that communities use in resolving localized disputes through historically accumulated and locally defined knowledge, culture, and practices (Murithi, 2006). Regarding to this, Ginty (2008) also argues indigenous mechanisms mean a locally agitated activities, usages, norms and practices used for conflict resolution and peace building. The term indigenous is become interchangeable with many distinctive dispute resolution mechanisms operating outside the scope of the formal justice system. These include customary, traditional, non-state, informal, popular, and alternative methods (Gebreyesus, 2014; Wajkowsha, 2016).
It is true that several societies everywhere have had their own long lived indigenous and customary conflict resolution and transformation methods, which intensely entrenched in the cosmology and cultures’ of the people; however it is hardly found in reality today (Zartman, 2000; Boege, 2006; Omeje, 2008 ). In Africa, the assimilation and imposition of exogenous approaches of conflict in the indigenous one led steady attrition of African traditional values (Bob-Manuel, 2010). Alongside, indigenous approaches to conflict resolution and peace process are endowed with valuable insight for the rebuilding of social trust and restoration of conditions for communal co-existence through more inclusive and community based process since they are inherent and draw from cultural knowledge bases of the society (Lederach,1998; Murithi, 2008).
Apart from this, African indigenous knowledge systems, which practiced for long time through emphasizing on communality and interdependence are rooted in the social, cultural, historical and believe system of the communities (Endalew, 2014). As a result, Africa indigenous conflict resolution mechanisms (ICRMs) inclined on whole community as parties in a dispute through recognizing truth telling, healing, reparation and reconciliation as a major instruments in the lives of African society (Daniel, 2010; Murithi, 2006; Bukari, 2013; Mpangala, 2004; Olateju, 2013). Despite cultural differences and ritual ceremonies in Africa, indigenous conflict resolution mechanisms are holistic, consensus oriented and we-group approach to avoid vicious circle of conflict and they are complementary with the principles of restorative justice (Boege, 2006). On the contrary, Ayittey (2014) argues that the indigenous idiom, which relies on African solution for African problems through African indigenous mechanisms and institutions, has become dishonored. For him it does not mean an intervention of African dictators through corrupt legal system, rather Africans indigenous conflict  resolution  mechanisms  that are deeply rooted in the tradition, custom and values of African society to ensure future peaceful co-existence.
In Ethiopia, which is a museum of diversified ethnic groups, ICRMs have been practiced across different communities for centuries in restoring the broken relationships and ensuring future peaceful coexistence among the conflict parties (Gebreyesus, 2014). In communities of Amhara, its accessibility makes the Shimglina or Council of Elders’ is widely accepted and practiced indigenous conflict resolution mechanism (Bamlak, 2013; Tihut, 2010). As counterpart, Jama Woreda community of South Wollo Zone in Amhara regional state has long lived ICRM called Amare. Therefore, the purpose of this study is to explore the role and process of Amare ICRM in restorative justice and transformative peace building in Jama Woreda.

Amare’s restorative justice approach to non-homicide conflicts
Conflicts and disputes in the study area have varying degrees of intensity ranging from simple family related disagreements to murder. However, the constitution asserts the role of indigenous mechanisms and customary practices to civil and family related issues, Amare Council of Elders has been engaging in criminal matters (Table 1). It has also clear set of compensation amounts and other implicit punishments for each injured and offences. 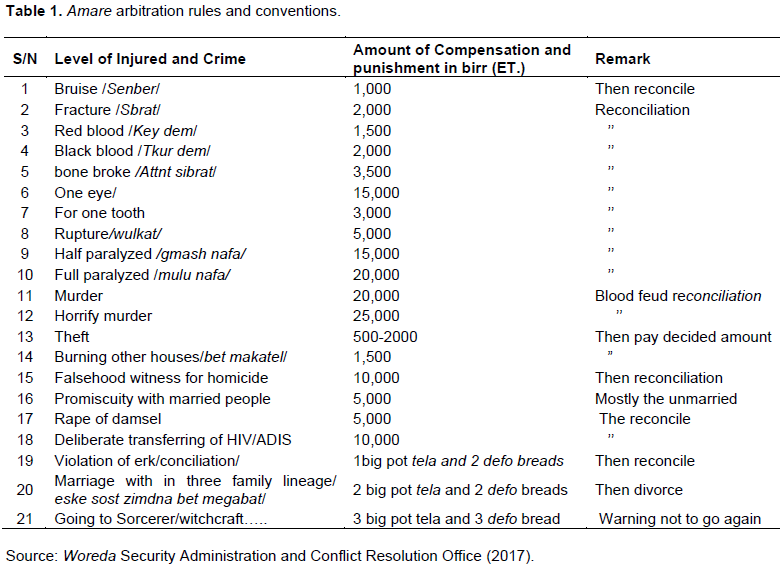 Conflict continues to be a menace and debilitating for many states across the globe. Apart from this, the scourge of inter-personal conflicts and homicide afflicts the study area of Jama Woreda. As the finding of this study showed, conflict/homicide is a common phenomenon and alarmingly escalating with adverse devastating social and economic effects. These effects are the loss of social capitals and social disorder, household firing and family displacement, economic vulnerability, political mistrust, legacy of psychological trauma, threat and suspicion. The causes of the conflicts have account different sources which arouse in peoples’ interaction and relations deliberately and negligently. Among these are land and inheritance issue, drunkenness and inebriation, corrupt and biased trials in the legal system, illegal proliferation of small arms and the culture of revenge.
Jama Woreda community has many customary practices and ritual ceremonial activities sermonize social harmony. Their indigenous conflict resolution mechanism is called Amare /council of elders/ shimglina. The nature and practice of Amare/council of elders/ as indigenous conflict resolution and reconciliation in Jama community is based on looking at individuals in and from the community to promote social harmony. Amare’s central theme of social harmony and its relationship orientations with the community’s culture of communality fortifies that of reconciliation, forgiveness and healing to be its center of conflict resolution and peace building process. Amare shimglina mechanism has a social and religious basements and responsibilities to mediate and reconcile from simple to blood feud reconciliation.  There are customary practices and ritual ceremonies used as instruments in the compensation, mediation and reconciliation process of Amare. These include Bele, Arami, Guma, and other ritual cleansing ceremonies taking at the end of the mediation and reconciliation. These practice have psychological, economic and trauma healing dimensions.
However, the finding of the paper asserts that there are many encountered problems, which undermine the visibility and operationalization of Amare shimglina indigenous mechanisms. These are sourced from the community, negligent and deliberate activities of the formal justice actors and the elders/conciliators/. Thus, the inactive role of indigenous conflict resolution mechanisms and the mere intervention of formal justice in the field are unable to halt the culture of revenge and ensure social harmony.