Optical and structural performance of polymer/fullerene thin film based on Poly (3-hexylthiophene)/1-(3-methoxycarbonyl)propyl-1-phenyl[6,6]C61 [(P3HT)/PCBM] after post-annealing

The polymer solar cell is a promising candidate for the next-generation solar cells because of its light weight, flexibility and easy fabrication. Poly (3-hexylthiophene) (P3HT) and 1-(3-methoxycarbonyl) propyl-1-phenyl[6,6]C61(PCBM) are, to date, the most-studied active materials around the world for bulk-heterojunction structure. Recent power-conversion efï¬ciencies are reported up to approximately 13%. This research investigates the optical and morphological properties of P3HT, PC61BM, and P3HT:PC61BM blend thin films deposited on glass substrate by spin-coating technique. Optical absorbance and transmittance measurements were recorded by using a single beam spectrophotometer. Morphological characterization was carried out with scanning electron microscope. Samples were pre-heated at 60°C for 30 min to evaporate the solvent. The samples deposited on the substrate were then annealed at 70 and 80°C for 30 min respectively. Optical properties of thin films were obtained. The sample annealed at 80°C has the highest absorption of photon energy in the visible region of the spectrum for the P3HT: PCBM blend thin film. Observation shows that as the annealing temperature increases, there is increase in absorption of photon energy for PC61BM and P3HT:PC61BM blend films and a reduction for P3HT thin film. Observation of surface morphology shows that: as the temperature increases the surface of the sample roughness increases. This is due to increase in grain size with increase in annealing temperature. It has been demonstrated in the study that gradual thermal annealing, in a controlled manner reveals a more stable and efficient control in tuning the P3HT–based thin film. Furthermore, this work has revealed the significance of employing thermal annealing strategies in control of the bulk of active layer of organic thin film. The results of the study can be used to develop a guideline for improving the design and fabrication of organic solar cells. It is expected that this result will lead to improvement in performance and stability of organic solar cells.

Solar energy is a renewable energy source from the sunlight, and has attracted much attention in recent years as  one  of  the  most  promising  ways  to  tackle  today’s energy crises because it is renewable and eco-friendly. The first generations of solar cells fabricated are crystalline silicon solar cells and they are the major player as far as current sales and commercialization is concerned. The second generations of solar cells are copper indium gallium selenide (CIGS) and cadmium telluride (CdTe), but are still costly and need special equipment and energy consuming processes for their production. The third generations are polymeric, quantum dot, dye-sensitized, and organic solar cells with potentials to allow for the fabrication of large area panels using less-complex processes and less-expensive materials and equipment, but still suffer from low efficiencies, stability, and durability. The third generation solar cells unlike inorganic solar cells usually employ solution-processed materials such as polymers, nanoparticles and additives which make them easier to manufacture using cheap processes and methods (Krebs, 2009). Efforts to improve the performance of solar cells which convert this abundant energy to electricity had been intensified lately. Polymer-Fullerene organic device are cheap electronics that can replace the widely used high cost silicon-based electronics for electricity generation. Organic solar cells (OSC) have strong advantages compared with conventional inorganic solar cells, which could expand the range of applications, including simple preparation, light weight, low cost, colorful, mechanically flexible and large area fabrication (Palgliaro et al., 2008; Jorgensen et al., 2008; Krebs et al., 2009). The recent power conversion efficiency of the organic solar cells is approximately 13% as reported by Berger and Kim (2018). Amongst the popular material used for the fabrication of OSCs is the combination of poly (3-hexylthiophene) (P3HT) and 1-(3-methoxycarbonyl)propyl-1-phenyl[6,6]C61(PCBM) that form the interconnection of donor/acceptor components called bulk heterojunction. This blend system has been widely used for the study of OSCs and has been reported to have efficiency increase upon thermal annealing (Zhao et al., 2010; Kalonga et al., 2013; Wu et al., 2014; Bakar et al., 2014; Abdullah et al., 2015; Zhe et al., 2015). A number of research have been carried out on annealing treatment of P3HT:PCBM as a means of improving its performance (Cheng et al., 2015; Vinokur et al., 2015; Kadem et al., 2016). Polymer material can be deposited and fabricated at low temperature by spin-coating spray coating, and printing methods (Tang, 1986; Peumans et al., 2003; Reyes-Reyes et al., 2005; Eslamian and Joshua 2014; Sandeep and Dananjaya, 2015). Thin films were developed, characterized, and optimized for optical absorbance from blends of organic polymer poly (3-hexylthiophene-2, 5- diyl) (P3HT) and the fullerene derivative [6, 6] phenyl-C61-butyric acid methyl ester (PCBM) as a means of improving its performance (Kalonga et al., 2013; Eslamian and Joshua, 2014; Oklobia, 2016) was studied in this work at low temperature using a spin-coating technique as a precursor for organic solar cells fabrication.

The impact of thermal annealing to the stability of P3HT, PC61BM, and P3HT:PC61BM blend thin films were investigated. This study reveals the significance of employing thermal annealing strategies in control of the bulk of active layer organic thin film. It has also been demonstrated in the work that gradual thermal annealing, in a controlled manner reveals a more stable and efficient control in tuning the P3HT – based thin film.

The materials used for the research are Poly (3-hexylthiopene-2,5-diyl) regioregular (P3HT) product of USA, [6,6]-phenyl C61 butyric acid methyl ester>99.5% product of Nederlands (PC61BM) which were supplied by Sigma–Aldrich. Also, the following experimental procedures were carried out.

1 ml of chloroform solvent was added into 15 mg of poly (3-hexylthiophene) (P3HT) and to 15 mg of [6,6] phenyl C-butyric acid methyl ester (PCBM) all from Sigma Aldrich to form P3HT and PC61BM solutions separately. The two solutions then underwent ageing process by using magnetic stirrer for 3 h without heat to allow the organic materials mixture to fully dilute into the solvent. Another solution was prepared by mixing P3HT solution with PC61BM solution in (1:3) volume ratio and stirred for another 3 h using magnetic stirrer for homogeneous mixture. The solutions were completely covered from light ray using an aluminum foil to avoid degradation of the materials.

To coat onto the substrate, cleaned substrate was placed on the stub of the spin-coater: setting the program, dispensing liquid, running the program. The researcher spin-coats the solution onto the pre-cleaned glass substrate at 4000 rpm for 30 s in ambient condition. The process of coating to drying was repeated to obtain the desired thickness of the film. The desired thickness of organic layer is between 85 to 100 nm. This technique is cheaper and easier to use because, it allows for uniform deposition unto flat substrate.

Out  of  the  three samples, two were annealed at temperature of 70 and 80°C for 30 min at step size of 10°C and then applied to slow cooling at room temperature. One sample was not heated, that is, the unannealed or control.

The pre-heated deposited samples were annealed at temperature of 70 and 80°C for 30 min. Optical transmittance and reflectance was measured using UV-VIS Avantes spectrophotometer model Avalight-DH-5BAL. Samples were characterized to determine the optical spectrum at different annealing temperature. The surface morphology studies of the thin films were carried out using Scanning Electron Microscope (SEM) model ASPEX 3020. To convert between the absorbance and transmittance, Equation 1 was used. 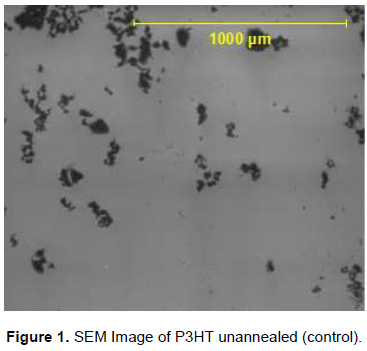 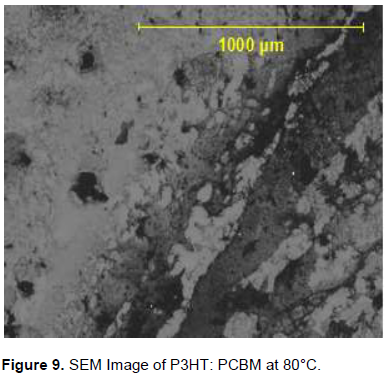 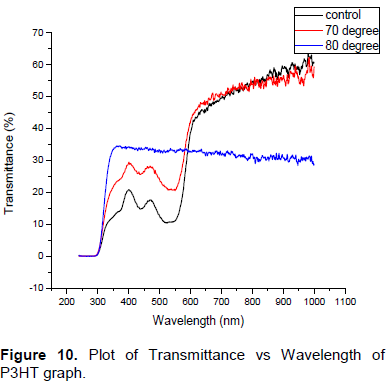 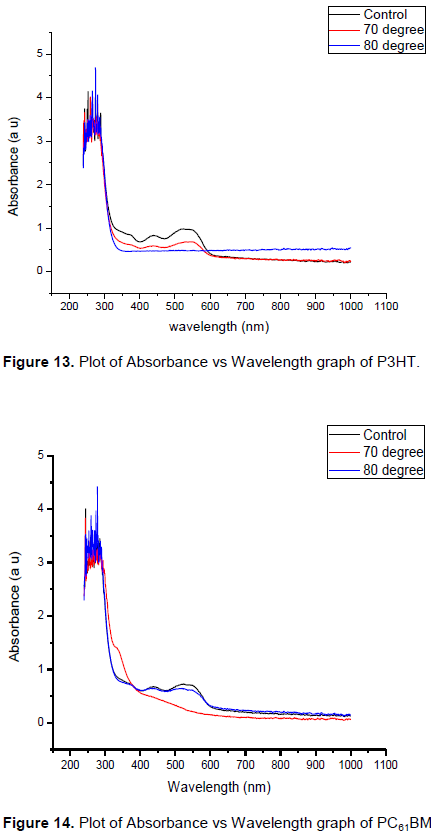 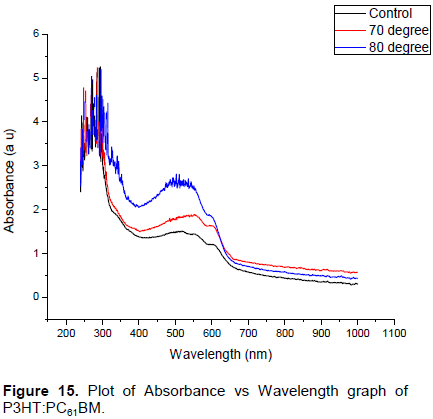 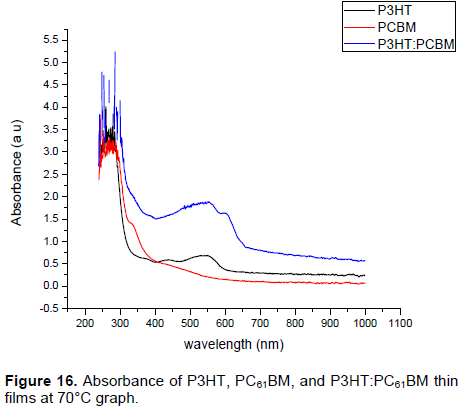 The wavelength absorption spectra of P3HT, PC61BM and blend P3HT:PC61BM (1:3) thin films annealed at 800C are shown in Figure 17, the blend system P3HT:PC61BM has highest absorption range from 400 nm to 800 nm in the visible spectrum. 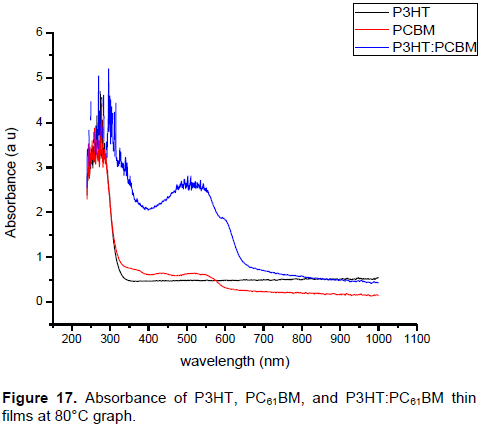 The thin films based on P3HT, PC61BM, and P3HT:PC61 BM blend have been deposited and annealed at 70 and 80°C, respectively. UV/Visible/NIR characterization was carried out with the UV Spectrophotometer. SEM was used to study the surface morphology. The result of the study  shows   that  annealing  the  sample  improves  the absorption of photon energy. Thermal annealing of the sample increases the surface roughness of the material due to increase in grain size. P3HT absorbance reduces with increases in annealing temperature in Figure 13 while the absorbance of PCBM increases with increased annealing temperatures. This work has shown the significance of employing thermal annealing strategies in control  of  the  bulk  of  active  layer  of  organic  thin film.

It has also been demonstrated in the work that gradual thermal annealing, in a controlled manner revealed a more stable and efficient control in tuning the P3HT – based thin film. The results can be used to develop a guideline for improving the design and fabrication of organic solar cells. It is expected that the result could lead  to   improvement   in   performance   and  stability of organic solar cells. Further study on the annealing temperature rise is the next focus.

The research was chosen to study the effect of thermal annealing on the optical properties and surface morphology of polymer/fullerene based materials at low temperature, a precursor towards an improved organic solar cells fabrication.

The experimental work was carried out at Kwara State University Malete – Ilorin in Materials Science and Engineering Laboratory.