What Transformative Leaders do: Emerging Perspectives in the 21st Century

In May 2013, African states launched Agenda 2063, a 50-year transformative vision labelled, “The Africa we want” (African Union Commission, 2015). The vision commits countries to work towards “an integrated prosperous and peaceful Africa, driven by its own citizens, representing a dynamic force in the international arena”. Before the launch,  no   less    than    seven    African     states    had independently committed to pursue national transformation by the year 2030. These were: Kenya (Government of Kenya, 2007), Egypt (The Arab Republic of Egypt, 2005), Liberia (Government of Liberia, 2012), South Africa (Republic of South Africa, 2012), Mauritius (Republic of Mauritius, 2015), Zambia (Republic of Zambia, 2006) and Namibia (Republic of Namibia, 2004).
Thus, both transformation and transformative leadership encapsulate of a long-term continental agenda well into the 21st century.
On the global front, the turn of the century was marked by calls for a new form of leadership to help the world navigate the turbulent times. Caldwell et al. (2012) citing the disillusionment and the widespread distrust towards leaders and organizations around the world, called for a new standard of ethical leadership labelled “transformative leadership” (Caldwell et al., 2012). In an overview of the global socio-economic environment at the turn of the century, Montuori and Fahim challenge the wisdom of conventional leadership theory to turn crisis into opportunity. They emphasise that, “transformative leadership begins with a drastic rethinking of the who, what, where, when and how of leadership” (Montuori and Fahim, 2010). Though these authors appreciate that transformative leadership is a work in progress and an emerging field of study, they still urge leaders to aspire to realize its ideals that are congruent with the challenges of the 21st Century.
Being an emerging area of study, leaders unfamiliar with its principles, are prone to using conventional (normative) methods to pursue transformative initiatives. Though it may be assumed that transformative leadership is another term for transformational leadership (Burns, 1978), Shields (2011) describes the difference between transactional, transformational and transformative leadership emphasising that it has its own independent philosophy and conceptual framework. Despite the wide-ranging calls for transformative leadership, its principles and practice remain subject to individual perspectives. The absence of cogent theory on the subject leaves a gap that may cause well-intentioned leaders to reject its potency. While the outcome of transformative leadership is institutional transformation or the resolution of complex environmental issues, a common understanding of the subject would give traction to efforts to have its benefits realized in multiple social and economic environments. The object of this literature review is to generate a cogent framework of its core ethos and make recommendations on its application.

In this literature review the researcher sampled and thematically analysed select publications that discussed transformative leadership. The reviewer conducted an online search of top 100 scholarly articles published between 2010 and the present, making specific reference to “Transformative leadership” in their title or abstract content. A shortlist of 67 publications mentioning or referencing the key word search was drawn up. These articles were assessed for substantive content discussing the subject matter and further narrowed down to a sample size of 51 articles for in-depth study. The sample documents were then further reviewed and categorized into four main themes based on the perspective in which the articles discussed the topic: a) Transformative perspective (24); b) Transformational perspective (6); c) Phenomenon perspective (12); and d) Agency perspective (9).
Each article was then separately analysed to identify the core/ critical descriptions and important statements that captured their authors’ interpretation of transformative leadership. The results were collated in passages that the researcher analysed to identify emergent themes from each passage. The researcher generated tables classifying the emerging thematic styles and common ethos from the four categories before making final reflections, recommendations and conclusion. 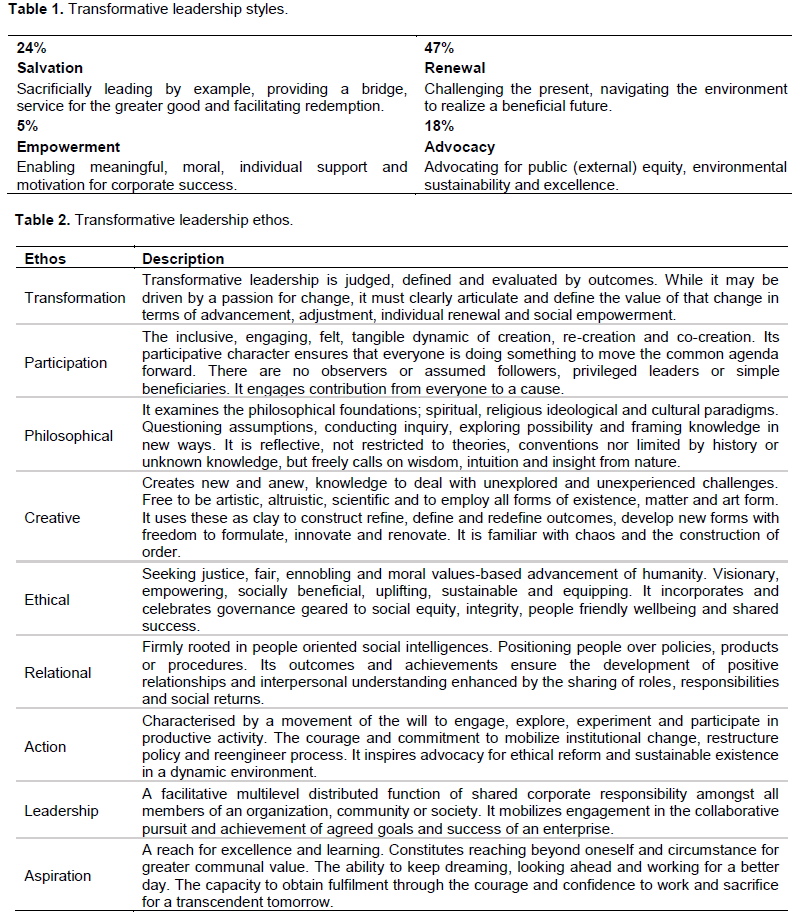 While this study set out to isolate the core ethos of transformative leadership as outlined in the nine   descriptions above. It has also generated insights on four expectations of a transformative leader that may also pass as the desired competencies of an effective 21st Century leader. The transformative leader is expected to a) facilitate institutional renewal and successfully navigate challenging environmental conditions, b) lead advocacy initiatives to raise societal awareness on ethical issues, c) provide salvation in seemingly hopeless situations and d) enable the moral empowerment of people to participate effectively in the pursuit of corporate goals.
Given the substantive distribution of the four themes among the reviewed articles it appears that these styles are shades of emphasis of a transformative leader’s roles and responsibility. In other words, at one time a leader may be pursuing institutional renewal, at another time the same leader may have to take on advocacy roles. At another time the same leader may be called on to provide salvation or empowerment to an underprivileged or ignored group. The transformative leader thus balances his or her role according to the needs of the day.
This article began by highlighting the call for transformative leadership to realize Agenda 2063. While the object may be to transformation the continent, leaders will need to determine how they are best positioned to realize these aspirations. For example, institutional leaders need to determine whether they are able to aid transformation by empowering staff to contribute to the broader vision or whether they will be called upon to engineer the renewal of the institutions they lead. While sacrificial service and advocacy calls for individual commitment to a cause, renewal and empowerment call for more strategic inclusive engagement. Nonetheless, while Agenda 2063 calls for transformative leaders, there is need to invest in the intentional training and development of such leaders rather than expect them to emerge naturally from society (Montuori, 2010).
The global call for new leadership is based on a dynamic, disruptive if not chaotic environment. In this context the transformative leader is called on to satisfy ethical public demands, navigate dynamic markets and grapple with disruptive environment such as imposed by the COVID-19 pandemic on societal health, trade and travel. The transformative leader is called upon to be creative, empathetic, ethical and supportive of a broad range of interests and stakeholders. The scope of this study did not allow for the development of operational transformative leader principles and practices. However, the authors cited under the section subtitled “Transformative perspective” provide a rich reserve of practical techniques and methods transformative leaders use to facilitate transformation in various situations.
Nonetheless, the emergent dataset in this study is a fertile   field    for    further    empirical    research   for  the
development of transformative leadership theory and practice. The findings of this study highlight the nature of the crucial role society has invested in and expects of transformative leaders in the 21st century. It may not be practical to expect these leaders to simply emerge from society.
There is a need for substantive numbers of such leaders at all levels of society. The author recommends that specific training and development programs be designed to equip leaders to competently respond to the call for transformative leaders in the 21st century (Montuori, 2010).
Leaders working in different environments should not assume that everyone knows what “transformation” means. Transformation, in each case, needs to be described and communicated in terms of deliverables, and more importantly, in terms of aspirations people can identify with. This will allow transformative agents, working on many different fronts, to participate meaningfully   and   collaborate   harmoniously  to  create desired outcomes.

Findings from this study suggest that transformative leaders do four things; renew institutional vision and performance, advocate for ethical social advancement, empower individuals to make meaningful contribution to corporate goals, and sacrificially commit to realize the interests of those they serve. Transformative leadership is a process of learning from the past, challenging the present and creating a new future. The process requires humility to learn from the past, observing “respect” when challenging the achievements of today, and having the courage to create a new future in changing and turbulent times. This article contributes the emerging body of knowledge and global understanding of the principles of Transformative leadership. It empowers today’s leaders to confidently  select  suitable approaches that deliver the expectations of stakeholders they serve.