Haricot beans are the most important food and cash crop for most of the Ethiopian farmers. However, bean stem maggot (BSM) (Ophiomyia species) is limiting the production of the crop particularly in dry areas. Three species are involved in the infestation: Ophiomyia phaseoli, Ophiomyia spencerlla and Ophiomyia centrosematis. Two decades ago, two management options of BSM were developed and used for the last twenty years. However, there is a tendency of decline in effectiveness. Hence, the current experiment was conducted to see the age effect  on the efficacy of BSM resistant varieties (Beshbesh and Melkae) and  high bean plant population density (400,000 plants ha-1) (narrow spacing). The experiments were conducted at Shalla (southern Ethiopia) and Omonada (Jimma). Randomized Complete Block Design (RCBD) in three replications was used as the experimental design. The plot size was 10 m × 10 m. The experiment was conducted in 2014 and 2015. The treatments were BSM resistant varieties (Beshbesh and Melkae), high bean plant population, standard check (Awash-1) and Imdalem (seed dressing chemical). For plant population treatment and Imdalem 70% WS seed treatment a bean variety Awash-1 was used as a planting material. Data collected include stand count, seedling percent mortality by BSM, vigorously score, number of larva per plant and grain yield. The data were analyzed using SAS software and mean separation was done by Tukey Standardized Range Test (p<0.05). In all parameters measured, Melkae bean variety become susceptible to BSM and cannot be used any more as a resistant variety. From the result of the experiment, it can be concluded that Beshebeshe bean variety, high plant population and Imdalem seed dressing can be used as integrated management of BSM in Ethiopia in general and study sites in particular.

Haricot bean is the most important crop grown by African farmers in general and Ethiopian farmers in particular (Ampofo et al., 1994). Haricot bean production in Africa suffers from various constraints including biotic and abiotic. From the biotic constraints, the damage caused by insect pest infestations under field condition is tremendous. The most common insect pests which attack common bean in the field are the bean stem maggots (BSM) (Ophiomyia species), African bollworm (Helicoverpa armigera) and Aphids (Aphis fabae). Of the insect pests attacking haricot beans, BSM is considered as a major pest of central and many sub-Saharan African countries especially under poor soils and dry conditions (Ampofo et al., 1994; Ampofo, 2009). Three species of BSM (Ophiomyia phaseoli, Ophiomyia spencerella and Ophiomyia centrosematis) were identified in Ethiopia. O. phaseoli and O. spencerella are the most widely distributed and abundant of the three species. O. centrosematis occurs rarely and represents less than 2% of the total BSM population. The incidence of BSM species is influenced by one or a combination of environmental factors and cultural practices including altitude, sowing date growth stage and type of the host plant. O. phaseoli and O. centrosematis are more prevalent in warmer areas mostly in south and south western part of the country at the elevation of <1800 m above sea level, whereas O. spencerella is dominant at higher altitudes (cooler and wetter conditions). Bean stem maggot attacks the bean plant as soon as the first pair of leaves begins to unfold (Odendo et al., 2005). It is most severe in late or off-season planted crops (Nderitu et al., 1990; Ochilo and Nyamasyo, 2011), hotter drier seasons and in plants under stress such as poor soil fertility (Ampofo et al., 1994; Ojwang et al., 2010). Severe BSM attack especially during the early stages of plant growth causes high yield losses. In Africa, yield losses ranging from 80 to 100% have been reported (Ochilo and Nyamasyo, 2011; Munyasa, 2013).
Various control methods have been recommended by different authors. These include cultural control practices such as adjustment of planting date (Muleke et al., 2013), crop rotation and associated cropping (Abate and Ampofo, 1996; Amoabeng et al., 2014). These practices enable the host plant to escape the peak period of pest population. Other methods such as earthing or hilling up soil around the stem of seedlings encourage the development of adventitious roots above the damaged stem resulting in the recovery of plants from the BSM damage (Forbes et al., 2009). Use of chemicals especially seed dressing has also been found effective against BSM (Abate, 1991; Williamson et al., 2008; Uburyo, 2016). Other control methods include mulching and fertilizer applications, which enhance plant tolerance (Ampofo and Massomo, 1994; Gogo et al., 2012), and use of resistant variety (Ampofo, 1993; Kiptoo et al., 2016 (Beshbesh and Melkae) have been identified as resistant to BSM (Tsedeke, 1990). In Ethiopia, as Integrated Pest Management options of BSM Beshbesh and Melkae as resistant bean varieties, high plant populations per hectare and seed dressing with Imdalem 70% WS were under use for the last twenty years. However, there was an indication that some of the options showed a tendency of decline in efficacy. Hence, the current project was initiated to see the aging effect of BSM proven technologies in the management of BSM at the moment.

Description of the study site
A field experiment was conducted at Shalla in southern Ethiopia and Omonada in Jimma in 2014 and 2015 main season under rain fed condition.
Shalla district is situated in west Arsi zone about 270 km south west of Addis Ababa. The area is lowland with an altitude of 1550 m above sea level, with a latitude of 38° 27’10.9’’E and Longitude of 7°17’08.6’’N. The site has a mean maximum temperature of 29.2°C and mean minimum temperature of 14.4°C. The soil texture is sandy loam and the site receives 763 mm mean annual rainfall, but with much variation in distribution and amount of 70% which occurs between the months of May and September.
Omonada district is situated in Jimma zone of Oromia regional state located at about 223 to 258 km south west of Addis Ababa. This Wereda lies between latitudes 7°29´59.99” N and longitudes 37°14´60” E. The elevation of the district ranges from 1000 to 3340 m. a. s. l.  The area experienced an annual average rainfall of 1000 mm for 8 to 10 months (Haile and Tolemariam, 2008). The main rainy season extends from May to September and the small rainy season takes place from February to April. The soil type of the area is ento soil. The major crops grown include coffee, maize, teff, sorghum, barely, pulses (beans and peas), root crops (enset-false banana and potato) and fruits (Avocado and Pineapple).
Treatments, experimental design, data collected and data analysis
BSM resistant varieties, Beshbesh and Melake were collected from Melkassa research center lowland pulse division. These two varieties were released by Tsedeke (1990) as BSM resistant and high yielding varieties. These varieties were multiplied in off season and 1 kg of each variety was allotted per plot for each study location.
Imdalem (Imadachlopride WS 70% group) was collected from Addis Ababa chemical company. It was formulated in powder form and dissolved in water at the rate of 500 to 700 ml water/100 g chemical powder. First, 100 g of Imdalem powder and 500 ml of water were prepared and thoroughly mixed with 1 kg of haricot bean seed until all the seeds get wet. The treated seeds were exposed to the sun to help adhere the chemical to the seed. Then the seeds were sown at the end of June. High plant population density (400,000 plants/ha) were recommended for the management of BSM by Tsedeke (1990) used for the experiment. The recommended spacing for the high plant population density was 40 cm between rows and 6 cm between plants.
The experiment was laid out in RCBD design in three replications. The plot size was 10 × 10 m. Percent seedling mortality was assessed by counting dead seedlings per plot and comparing it against the whole plant population per plot. Such exercise was done three times starting two weeks from plant emergence. Percent mortality was calculated using the following formula reported by Ampofo et al. (1987).
PD= NDP×100/(TSC/P)
where PD = Percent damaged plant, NDP = No. of damaged plant per plot, TSC/P = Total stand count per plot.
Severity score were taken by visual observation using 0-5 scales where 0=no infestation, 1=less infested, 2=infested, 3=highly infested, 4=severly infested, 5=dead plants. This rating scale was adopted from work the work of Ampofo et al. (1987).
Ten plants per plot were randomly sampled and cut at ground level using knife. Then, the number of encountered BSM larvae and/or pupae was recorded and put in a petridish and taken to laboratory for further rearing. The pupal color was used for identification such that brown pupa was for O. phaseoli where as black pupa was for O. spencerella.
Vigorousity of the plant was also estimated by visual observation using 1-5 scale before plant maturity. Yield data (kg/ha) were taken from 20 plants from central rows after the seed dried to the optimum moisture content of 14%.
Data were analyzed using SAS program version 9.0. Percent mortality data were transformed to square root transformation before the analysis using one-way analysis of variance. Significant means (p<0.05) were separated using Tukeys studentized range test (HSD).

Effect of different BSM management options at Shalla
Results obtained at Shalla are presented in Figures 1 and 2 and Table 1. Overall, the severity of BSM was higher in 2014 than 2015 at Shalla as percent seedling mortality ranges from 4 to 22% in 2014 as opposed to 2 to 13% in 2015. The highest percent seedling mortality was recorded on Melkae and the lowest on Awash-1 treated with Imdalem (Figure 1). Larval density per plant at Shalla was higher in 2014 than 2015. The highest larval density per plant was recorded on Melkae, while the lowest was on Awash-1 treated Imdalem. The level of bean plant vigorousity and yield per hectare at Shalla were given in Table 1. Vigorousity of bean plant was significantly lower in Melkae bean variety in both 2014 and 2015. Bean yield was also significantly lower in Melkae. 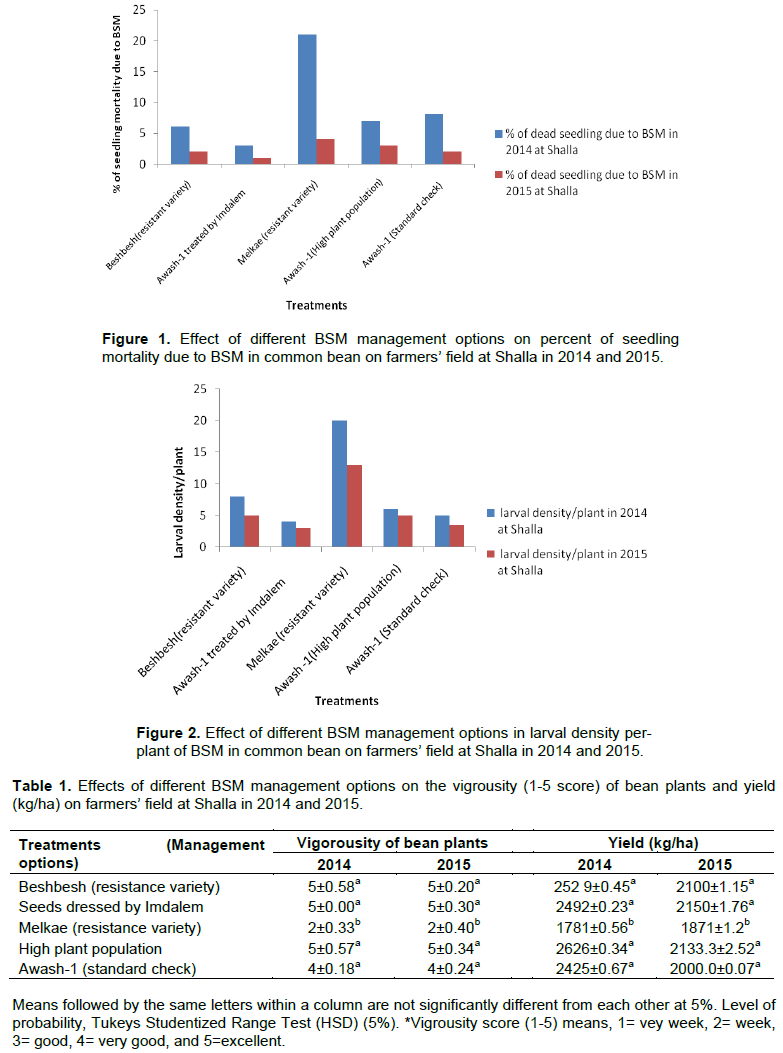 Effect of different BSM management at Omonada
Results obtained at Omonada are shown in Figures 3 and 4 and Table 2. Percent seedling mortality was significantly higher in Melkae. The highest percent seedling mortality of 15% was recorded in 2014 (Figure 3). BSM larval density per plant was recorded in 2014 on Melkae bean variety (Figure 4). Bean plant vigorousity and yield per hectare was significantly lower in Melkae bean variety (Table 2).
Results of both locations indicated that Melkae, the resistant variety lost its ability of overcoming the attack by BSM lost resistance due to age effect. The other technologies developed against BSM such as Beshebshe bean variety and high plant population remained effective in overcoming BSM damage. Ampofo (1993) and Tsedeke and Ampofo (1996) reported that some bean varieties which are currently resistant to some pests in general and BSM in particular can be susceptible at any time because of the fact that there are only few genes that control resistance which is known as vertical resistance. The fact that Melkae is a variety with vertical resistance as opposed to Beshebshe which looks horizontally, resistant variety became susceptible to BSM. 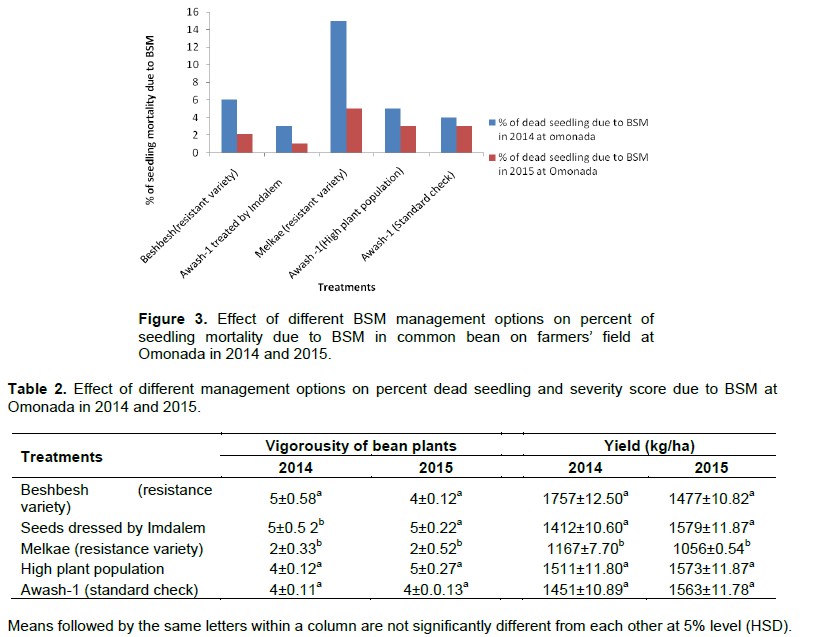 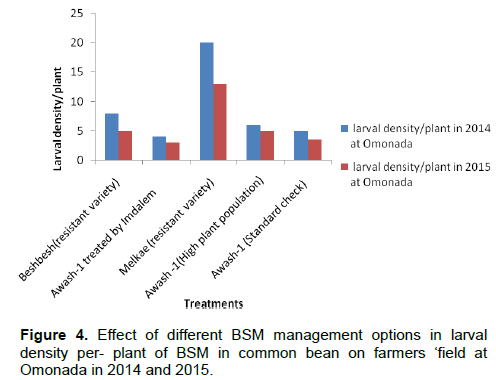 From the current experiment, we came to know that Beshbesh bean variety, use of high plant population and Imdalem seed dressing can be used as integrated management of BSM in Ethiopia in general and study sites in particular.

The authors are very much grateful to Melkassa Research Center, Lowland Pulse and Crop Protection Teams for their both technical and fincial support for executing the experiment.