Helicobacter pylori is a gram negative bacteria, spiral, flagellated bacillus that naturally colonizes humans’ stomach. It lives extra-cellular spaces, mucous layer layer. Then this infection induces a host response that results in mucosal damage and a chronic active gastritis (Ostrow et al., 2010). H. pylori infection is associated with peptic ulcer, gastric cancer, and lymphomas in human (Marshall et al., 2008). The infection has also been associated firmly with the development of gastric neoplasia, including gastric adenocarcinomas and gastric mucosa-associated lymphoid tissue lymphomas (Versalovic, 2003). In addition, the prevalence of H. pylori infection among People Living with Human immunodeficiency virus (HIV) varies from 10 to 76% depending on the period, geographical area and diverse in population (Nkuize et al., 2010; Fialho et al., 2011). Even if antiretroviral treatment (ART) had brought improvements including and increased the life expectancy in HIV infected individuals, however, H. pylori infections are seen more frequent in ART patients compared to those did not receive ART (Palella et al., 1998). The gastro-intestinal tract (GIT) plays an important role in the patho-physiology of HIV/ Acquired Immuno-deficiency syndrome (AIDS) (Khamri et al., 2010). In addition, H. pylori colonizes the gastric and duodenal mucosae and then it induces a specific local in addition with systemic immune response. The CD4+ T cells, dendritic cells, regulatory T cells and Th17cells components also play a role in HIV pathogenesis (Khamri et al., 2010; Mitchell et al., 2007). However, few studies were done on the assessment of  problem in Ethiopia and these studies were done based on serological tests of that its own drawbacks and in non-discrimination in between current and past infections, including with its low specificity.

This institution based cross sectional study was conducted at Hawassa University comprehensive specialized Hospital, Southern Nations Nationalities and Peoples Region (SNNPR) from September to November 2017. The Hospital was established in November 2005 and it provides teaching and health services. Nowadays, the hospital has over 400 beds and providing health services for patients including practical training for students. About 7125 HIV positive patients were attending the Hospital during the study period. All HIV-positive adults on ART age greater than or equal to 18 years old were eligible in the study. However, patients who were receiving anti-H. Pylori treatment within two weeks, and who were receiving anti-H. Pylori agents currently were excluded from the study.

Ethics clearance and consent to participate

The study was approved by the Institutional Review Board of Hawassa University, College of Medicine and Health Sciences. All the study participants were well versed about the protocol of the study, the involvement was voluntary and written informed consent was obtained from the study participant before data collection.

Based on the above-mentioned, formula, including with 10% non-response rate, the final sample size was calculated to be 390. To select participants from the study population, daily patients flow was assessed for a week in the ART clinic. Thus, the trend showed that the average weekly HIV patients flow was about 73. Lastly, every fifth HIV-infected patients were selected by systematic sampling method.

Socio-demographic data and other relevant medical related information of the study subjects were collected by trained nurses using pre-tested designed questionnaires. About two gram of stool sample was collected from each patients using sterile stool containers with a spatula in it. Instruction was given for each patient to avoid contamination of sample from the toilet, and covering immediately to avoid sample drying. Sample containers were properly labeled with unique number that was analogous with the patient’s identity number found on the questionnaire. In addition, H. pylori stool antigen test was performed at Hawassa University Comprehensive Specialized Hospital Laboratory by H. pylori stool antigen test kit (CTK H.PYLORI, USA) according to the manufacturer instruction. Moreover, the test kit Sensitivity and specificity was 94.4 and 97.8%, respectively. Further, laboratory performance was strictly managed by following standard operating procedure from sample collection to result releasing.

All questionnaires were checked and entered into Epi Data version 3.1 and then exported to Statistical Package for Social Sciences (SPSS) version 20 for statistical analysis. Besides, categorical variables were summarized as frequencies and percentages, while mean values and standard deviations were tabulated for quantitative continuous variables. Chi-square was used for categorical variables. Bivariate analyses were conducted primarily to check the study groups differences in the distribution of categorical variables. Further, to control the possible effect of confounding variables, those variables having a P-value of less than 0.2 were entered in to multivariate logistic regression model. Finally, alpha level was set at 0.05 for statistical significance at 95% of confidence interval (CI). 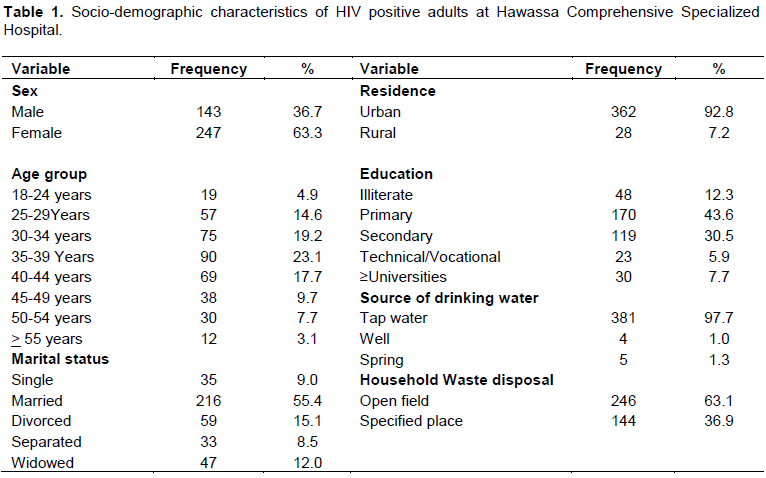 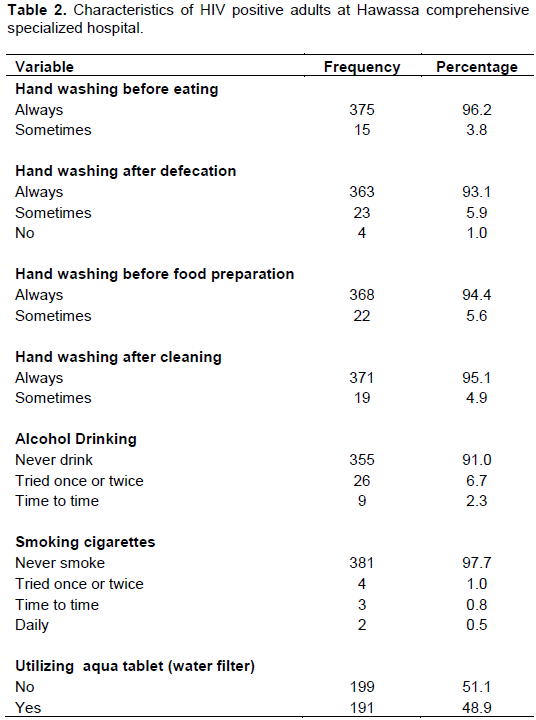 Clinical characteristics and the prevalence of H. pylori infection 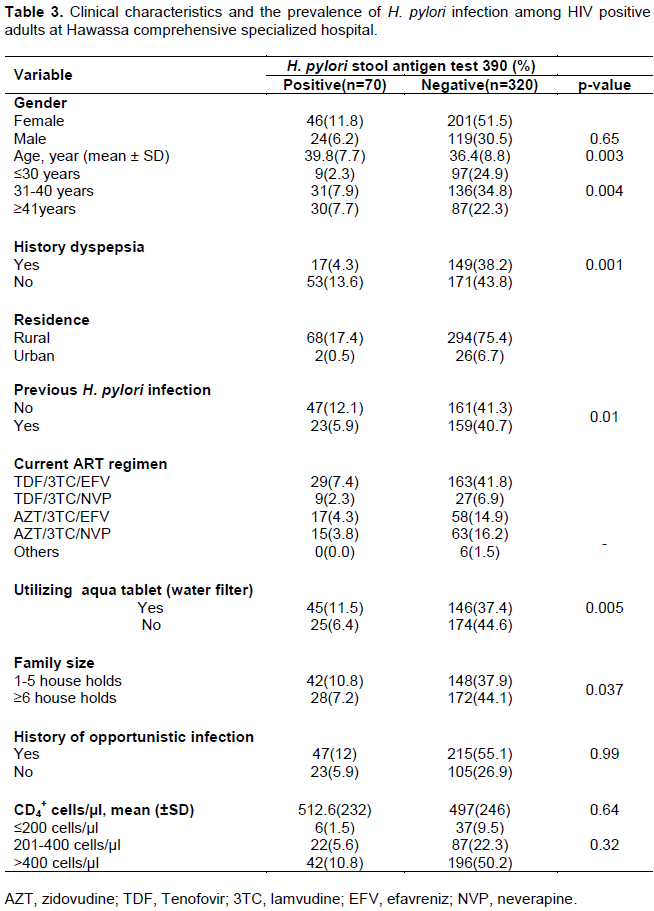 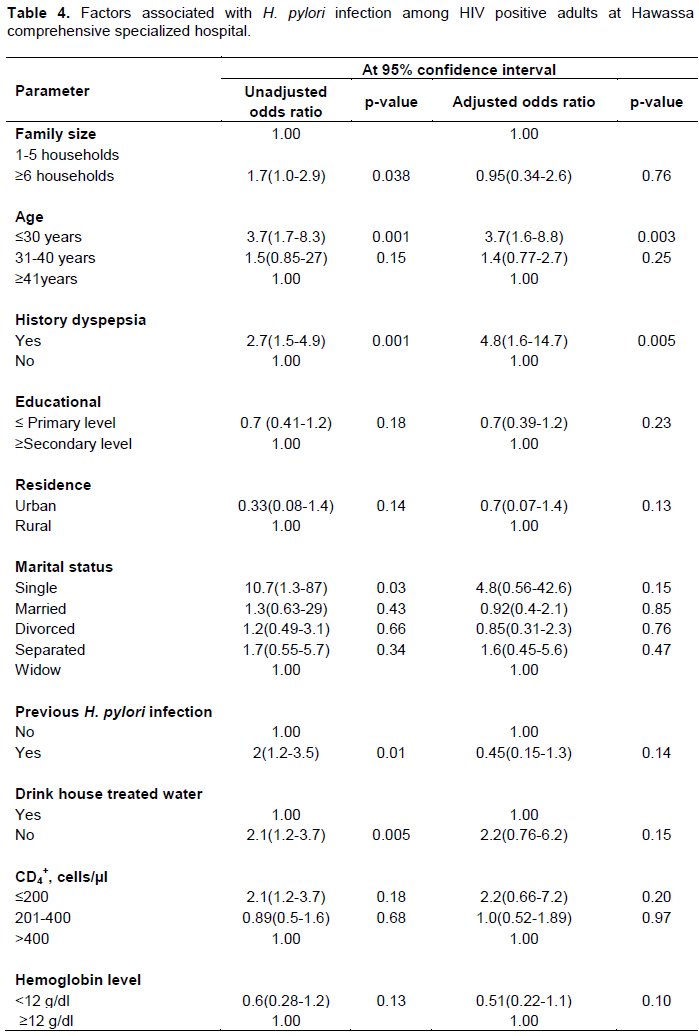 It was found that the high prevalence of H. pylori infection in women (11.8%) when compared to males6.2%). And similar findings were reported by Fialho et al. (2011) from Brazil and Anejo-Okopi et al. (2016) from Nigeria. We found that lower prevalence of H. pylori infection among patients with CD4+ cells  count  below  or  equal to 200 mm3 and the finding is in line with the studies conducted by Fialho et al. (2011) and Sarfo et al. (2015). In support, the low rate has been suggested that CD4 cells play a role in inducing or perpetuating tissue and epithelial damage that may facilitate H. pylori colonization (Bontems et al., 2003). Further studies suggested that decreased gastric acid secretion might be predisposed to gastric colonization by other microorganisms that might compete with H. pylori bacteria and the use of either antibiotics or proton pump inhibitors in the low count of CD4+ cells in HIV patients my decreases colonization of H. pylori (Panos et al., 2007; Nevin et al., 2014).

This study showed that 2.3% of participants with age ≤30 years were infected with H. pylori, and this was lower than study report from Nigeria with similar age group, (Anejo-Okopi et al., 2016).

In addition, the current study indicated that the presence of dyspepsia was found to have a significant association with H. pylori infection. It in line with the study reported by Anejo-Okopi et al. (2016) that indicated that dyspepsia was associated with H. pylori infection. Furthermore, the association of H. pylori with dyspepsia condition has triggered a major paradigm change in patients’ management (Jemilohun et al., 2011).

It was found that no association of H. pylori infection with CD4+ cells. In support, different studies depicted that CD4+ cells has been shown to be raised in H. pylori gastritis, but gastric inflammation has been correlated with lower H. pylori bacteria load, and pro-inflammatory genetic profiles are associated to lower H. pylori sero-prevalence. Besides, H. pylori infection requires an intact mucosal cellular immunity, and that the loss of the CD4+ cell population in the gastric mucosa may prevent H. pylori persistence (Sarfo et al., 2015; Aebischer et al., 2010).

In this study, there is association of H. pylori infection with age less than or equal to 30 years of participants and this in line with the other studies report (Anejo-Okopi et al., 2016; Abebaw et al., 2014; Chen et al., 2013). Furthermore, current study showed that no significant association in the prevalence of H. pylori infection with family size, educational status, marital status, alcohol consumption, residence and occupation.

This study was conducted on HIV patients who had many underline disease conditions as a confounding factor that was not completely controlled, so as to have impact on the outcome of the statistical associations between H. pylori infection and different variables of interest. The other limitations were Immuno-chromatographic stool antigen test characteristics, (non-ELISA method), lack of HIV negative controls and cross sectional nature of the study that did not show cause and effect relationship between the variables.

The authors appreciate ART clinic nurses for their endless support throughout the data collection. They also acknowledge the Hawassa University comprehensive specialized hospital laboratory for materials support and people living with HIV for their voluntary participation.