Toxoplasma gondii infection is wide spread in Iraq that is why this study was carried out to detect its presence in semen samples of infected male rats experimentally. Impression smears, real time polymerase chain reaction (PCR) and histopathological changes were used for detection of T. gondii. The current study included the isolation of local strains of T. gondii from placenta of women that experienced abortion that had toxoplasmosis history, 0.3 ml of suspension contained 100 tissue cyst per rat injected interperetonially in 40 rats. Eight weeks post inoculation, rats were sacrificed then dissected and epididymis was immediately removed. Impression smear were made from semen stained with eosin-nigrosin as initial diagnosis of infection confirmed by the presence of cysts of parasite. This confirmation is dependent on the molecular diagnosis by real time PCR which successfully detected the parasite in 90.3% of rats inoculated with aborted placenta suspension. Some histological changes in testicular tissue were collapse and shrinkage in somniferous tubules with multinucleated giant cells with vacuolar degeneration of lydig cell. These finding suggest that T. gondii infection cause a temporary impairment and insufficiency in male reproductive activity with probability of transmission of the parasite in semen to females or to other animals such as cats.

Toxoplasma gondii is a protozoan parasite that is widespread globally and infect man and animals (Shi-guo et al., 2006). Most infections in humans are asymp-tomatic but at times the parasite can produce devastating disease, toxoplasmosis ranks high on the list of diseases which lead to death in patients with acquired immuno-deficiency syndrome (AIDS) (Ahmad et al., 2012). In AIDS patients, any organ may be involved, including the testis, dermis and the spinal cord, while the brain is most organ frequently reported (Hill and Dubey, 2002).

T. gondii is horizontally transmitted to humans by the accidental ingestion of oocysts in cat feces or by eating raw or undercooked meat containing cysts. T. gondii can be transmitted by solid organ transplants to the recipient and transfusion (Dubey and Jones, 2008). T. gondii can be transmitted by semen, milk, saliva and eggs (Dubey and Lindsay, 2006). The disease primarily occurs in children and adults (including pregnant women) which is asymptomatic in most patients (Afshari et al., 2013). In immunocompromised patients, reactivation of latent disease can cause life-threatening encephalitis. After a short phase of acute toxoplasmosis, the infection proceeds into its latent phase when cysts are formed and this cyst survive for long period of host's life, mainly in neural and muscular tissues of infected subjects. In immunocompetent subjects, the latent phase of infection is considered symptomatic and harmless, increased accidents toxoplasmosis induced changes in the behavior of humans and rodents may be dramatically different even if they are induced by the same process, e.g. by production or induction of production of the same neurotransmitter in the host brain tissue (Doubey and Jones, 2008).

The objective of this study was to detect T. gondii in semen samples of rats which were experimentally infected by using suspension prepared from placenta of women that experienced abortion due to toxoplasmosis.

Mature male rats (Rattus norvegicus) were reared in plastic cages supplied with drinking water and food, and kept in animal house of the College of Veterinary Medicine of Al-qadisiya University. The animal house was supplied with ventilator fan and air conditioner in order to control the room temperature. Sterilized food and water were used for rats along the period of experiment.

Parasite was isolated from placenta of women that experienced abortion with toxoplasmosis history. Placenta were cut into small pieces and mixed with an equal amount of normal saline and grinded by using mortar and pestle. This preparation (solution) was passed through a piece of gauze to avoid large particles and then centrifugation was done with 3000 rpm for 10 min. The supernatant was discarded and the sediment was suspended by normal saline and the process was repeated three times by washing the samples, 0.1 ml of compound 1,000 units of penicillin and streptomycin 100 mg was added to prevent contamination (Alkennay and Hassan, 2010). 0.3 ml suspension contains 100 tissues cyst of parasites used for experimental infection in 40 rats through intraperitoneal route, 10 rats without anything (as control). This method was used (AL-taie and Abdulla, 2008) for inoculation of the parasite from uncontaminated samples and it is a sensitive method.

After 8 weeks from the beginning of injecting the laboratory rats, the rats were anesthetized using 0.2 ml ketamine and 0.1 ml xylazine injected into intraperitoneal cavity by using a sterile syringe of 1 ml (Alves et al., 2011). Samples were collected from infected group and control group of rats to detect the parasite by using impression smear and to detect B1 gene by using qRT-PCR. After that, one testes was stored in formalin 10% for histopathological study.

The two epididymis were removed from each rat and immersed in 1 ml of warm physiological saline, then each epididymis caudate was minced using microsurgical scissor and kept at 37°C for later tests (Oyedeji et al., 2013).

Detection of T. gondii in experimentally inoculated rats by impression of smears which were obtained from semen was doned. Smears were dried, fixed in methanol and stained with eosin nigrosin stain (Hill and Dubey, 2002).

Samples collected were fixed in 10% formalin for 48-72 h, and the material was processed by histopathological technique method as published by Salibay and Claveria (2006). 5 μm semi-serial sections were placed on slides and stained with hematoxylin and eosin (H&E) for microscopic examination.

50 samples of semen from rats inoculated with parasite were collected with control. The samples stored in a refrigerator until use for genomic DNA extraction.

Genomic DNA was extracted from frozen semen samples of experimental rats by using (Genomic DNA mini Extraction kit. Geneaid. USA). 200 µL semen sample placed in 1.5 ml microcentrifuge and 20 µL proteinase K (10 mg/mL) was added for cell lysis. Then genomic DNA extracted according to kit instructions. The purified DNA was eluted in elution buffer provided with kit and store at -20°C, and the extracted DNA was checked by Nanodrop spectrophotometer.

The Real-Time PCR amplification reaction was done by using (AccuPower® DualStarTM qPCR PreMix Bioneer. Korea) and the qPCR master mix were prepared for each sample according to company instruction as shown in Table 2. 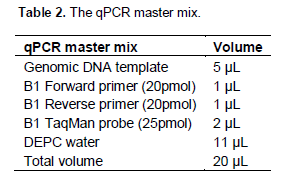 These qPCR master mix reaction components mentioned in Table 2 were added into AccuPower® DualStarTM qPCR PreMix tubes which contain Taq DNA polymerases, dNTPs, 10X buffer for TaqMan probe amplification. Then tubes were placed in Exispin vortex centrifuge at 3000 rpm for 3 min, after that transferred into MiniOpticon Real-Time PCR system and the thermocycler conditions shown in Table 3 was applied.

After eight weeks of inoculating rats, there was impression smear of stained semen with eosin-nigrosin in the tissue cyst of T. gondii as initial detection of infection, the result revealed that the percentage of tissue cysts were 80% in different size and numerous bradyzoites (Figure 2A and B). This study is similar to that of AL-Kennany and Hassan (2010) who isolated the T. gondii in same way from placenta of aborted ewes and AL-Khaffaf and Abdullah (2005) who isolated the T. gondii bradyzoites from placenta of women that experienced abortion and confirmed by the appearance in different size and involved numerous number. Abdoli et al. (2012) referred that T. gondii parasite can infect the male genital tract. Dalimi and Abdoli (2013) reported presence of parasites in rats seminal fluid by using impression smear method. T. gondii can be found in different fluids and tissues of infected animals (Miller et al., 2000). Among the reproductive complication caused by toxoplasmosis in aborted sheep, it is one of the most important causes of economic losses (Moreno et al., 2012). The occurrence of infection forms in the semen of human and bulls (Scarpelli et al., 2009), semen and milk of goat (Figueiredo et al., 2001), semen of sheep (Lopes et al., 2011) was through possible routes of transmission of disease by ventral rout with sours infection. The data obtained from limited studies performed in animal models reported presence of parasite in rat’s brain (Terpsidis et al., 2009). While AL-Taie and Abdulla (2008) found T. gondii in brain, liver, heart, spleen, lymph nodes, kidney of the rats. The study was through possible routes of transmission of disease by ventral rout with sours infection.

The real-time PCR technique is very specific and sensitive method in detection of T. gondii when compared with direct impression smear test. The results of real-time PCR technique for semen showed the presence of parasite in high rate (90.3%) in rats inoculated with suspension of placenta (Figure 1). This is similar to the result of Shi-guo et al. (2006) who reported that the rate of infection was 100% in male rabbits. Also, this tech-nique was used for detection of parasite in many samples of tissue and body fluid and in brain of sheep (Donovan et al., 2012). Mesquita et al. (2010) found T. gondii in blood and cerebrospinal fluid in AIDS patients while Amerizadeh et al. (2013) found T. gondii in serum samples and in amniotic fluid of pregnant women and in blood samples of newborns with congenital toxoplasmosis (48%) (Gunel et al., 2012). 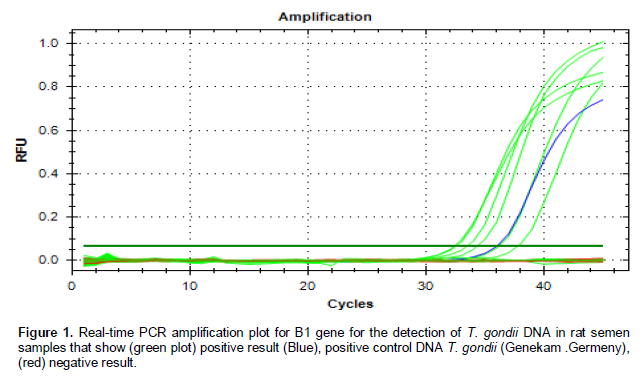 Histologically T. gondii was detected as a cyst of parasite in some testicular tissue and parasites which was found in other section, there is sever congestion and hemorrhage in the somniferous tubules, presence of multinucleated giant cells, suppression of spermatogenesis vaculation of spematogonia with absence of spermatozoa, thickening in the interstitial tissue among somniferous tubules, many histological changes in testicular tissue collapse and shrinkage in somniferous tubules with multinucleated giant cell with vacuolar degeneration of lydig cells. These changes are not observed in the control rats, suggesting that these changes occur due to T. gondii infection (Figure 3A and B). Figures 4 and 5 show normal tissue and structure of spermatogenesis and somniferous tubules. Lopes et al. (2011) detected the parasite in parenchymal tissue of the male reproductive system of sheep by immunohisto-chemistry and the changes were multifollical mono-nuclear interstitial inflammatory infiltrate and diffuse testicular degeneration with calcified foci, while Gheoca et al. (2009) reported rare case of T. gondii cyst in testicle sample of small mammals species, Apodemus flavicollis (mammal). Terpsidis et al. (2009) and Abdoli et al. (2012) reported that no histological changes were detected in examined testes in their findings suggesting that T. gondii infection can cause temporary impairment of the reproductive system by insufficient male production with the parasite been transferred through semen of animals as different source of infection, this may occur with human toxoplasmosis. 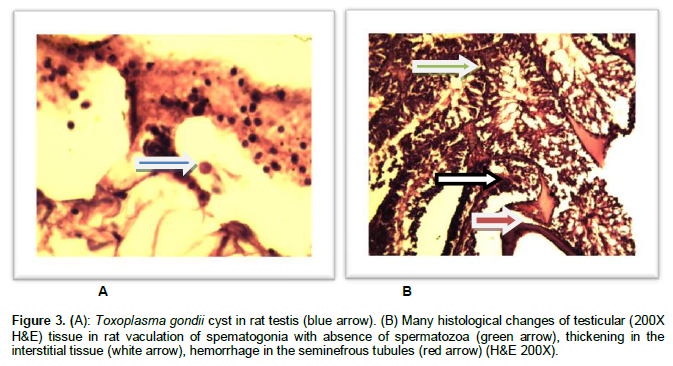 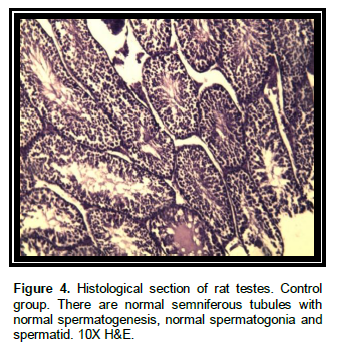 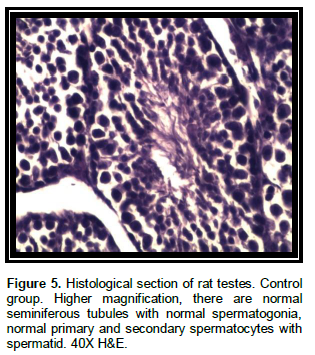