The occurrence of carbapenem resistance among Enterobacteriaceae has reached critical levels worldwide. The present study was carried out to screen for carbapenem resistance among Enterobacteriaceae isolates from blood, surgical wound and tracheal samples in different wards and intensive care units between the period of 2010 through 2012 in a teaching hospital attached to JIPMER, south India. A total number of 425 meropenem-resistant isolates belonging to Enterobacteriaceae were included. Genes encoding β-lactamases (blaNDM-1 and blaOXA-48) and influx of β-lactams through the major porin OmpK36 were characterized. Multiplex PCR amplification assays indicated that out of 425 meropenem- resistant isolates, 75 and 187 isolates harbored blaNDM-1 with and without OmpK36, respectively. One and five Klebsiella pneumoniae isolates harbored blaOXA-48 with presence and absence of OmpK36, respectively. Transferability of the plasmids was tested by conjugation assays and it was found that 110 transconjugants carried blaNDM-1. blaOXA-48 gene was not transferable by conjugation analysis. The study highlights the emergence of blaNDM-1 and blaOXA-48 genes in this center.
Key words: Enterobacteriaceae; blaNDM-1; blaOXA-48; OmpK36; conjugation.

Antibiotic resistance is one of the most important growing global challenges to humans in the environment (Korzeniewska and Harnisz, 2013; Prabaker and Weinstein, 2011; Rhomberg and Jones, 2009; Duijn et al., 2011). Carbapenems are very useful beta-lactams for treatment of infections due to MDR Enterobacteriaceae. Several investigations have been reported on the importance of long term care facilities especially hospitals as reservoirs of multidrug-resistant bacteria (MDRB) and colonization with these bacteria may last for an extended period, and patients in long term care facilities represents a major route for the introduction of MDRB to acute-care facilities (Korzeniewska and Harnisz, 2013; Lewis et al., 2007; Mansouri and Abbasi, 2010; Pitout and Laupland, 2008).

Acquisition of carbapenemase enzymes and loss of porins are the main mechanism of resistance to this group of antibiotic (Cuenca et al., 2003; James et al., 2009). The most prevalent carbapenemases are the molecular class B metallo-β-lactamase (MBL), mainly blaNDM-1 and blaOXA-48 (Castanheira et al., 2011; Kilic et al., 2011). Particularly, in last few years blaNDM-1 (Castanheira et al., 2013) and blaOXA-48 (Pitart et al., 2011) genes are carried on plasmids that enable their transfer between different species of Enterobacteriaceae (Mohamed et al., 2013). Outer membrane protein (OMP) serve as a major gateway for the passage of β-lactams and deficiency of this protein has emerged as a major mechanism in multidrug resistant (MDR) Enterobacteriaceae (Jacoby et al., 2004; Pfeifer et al., 2012). Furthermore, previous investigations have been reported that deficiency in OMP expression resulting in the elevation of MIC in K. pneumoniae than that of non-deficient strains (James et al., 2009; Jacoby et al., 2004; Pfeifer et al., 2012).

In this work, an attempt has been made to study the characteristics of the recent dissemination of blaOXA-48 and blaNDM-1-producing Enterobacteriaceae in OmpK36 deficient strains and to determine its prevalence in strains isolated from patients.

Bacterial isolates and susceptibility tests
A total of 425 meropenem-resistant Enterobacteriaceae isolates were collected between 2010 and 2012 from clinical specimens and tested for decreased susceptibility to carbapenems by agar dilution method, according to the guidelines of the Clinical and Laboratory Standards Institute (CLSI 2011). According to CLSI recommendations, the production of carbapenemase among the isolates was phenotypically confirmed by the modified Hodge test and meropenem/ethylene diamine tetra-acetic acid (EDTA) double-disk synergy test as per CLSI guidelines 2011. Escherichia coli ATCC 25922 was used as a negative control.
PCR amplification
Total DNA was extracted from all strains by boiling lysis method. A multiplex polymerase chain reaction (PCR) was used to amplify genes encoding blaNDM-1 and blaOXA-48 and OmpK36 (Table 1). A total of 30 cycles were performed with a thermal cycler (Master cycler gradient, eppendorf) consisting initial denaturation step for 15 min at 95°C, denaturation step for 1 min at 95°C, an annealing step for 1 min at 59°C and extension step for 1 min 30 s at 72°C. After the final cycle there was a step of final extension of 10 min at 72°C. The PCR products generated were visualized by ethidium bromide staining after electrophoresis in a gel containing 1.5% agarose.
Conjugation experiments
Conjugation was carried out at 30°C using sodium azide resistantE. coli J53 as recipient. Transconjugants were selected on MacConkey agar plates supplemented with meropenem (4 mg/L) and sodium azide (100 mg/L) (Jamal et al., 2012). Plasmid was extracted from transconjugants, respectively and analyzed for blaNDM-1 and blaOXA-48 genes. Multiplex PCR was carried with respective blaNDM-1 and blaOXA-48 primers (Table 1). 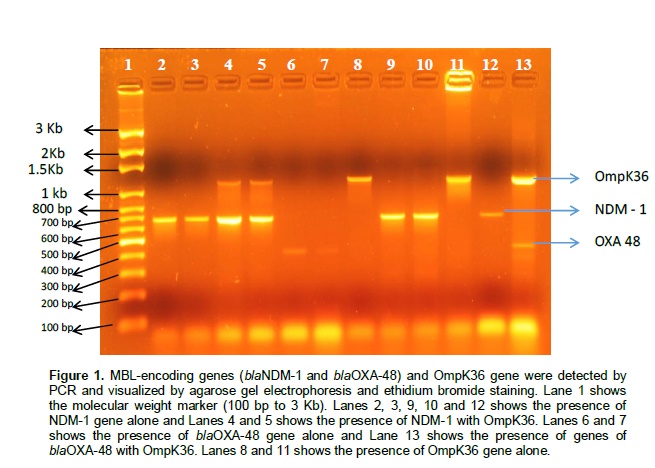 Conjugation experiments were carried out on all 425 clinical isolates using sodium azide-resistant J53 E. coli strain as a recipient. Transconjugants were selected on MacConkey agar plate containing meropenem and sodium azide. 117 (27%) isolates had shown positive on agar plate with sodium azide and meropenem. Plasmid was extracted from all the selected transconjugants by alkaline lysis method, and blaNDM-1 and blaOXA-48 genes were analyzed by multiplex PCR assays (Figure 2). From this study, it was observed that 110 out of 117 transconjugants carrird blaNDM-1 and none carried blaOXA-48. 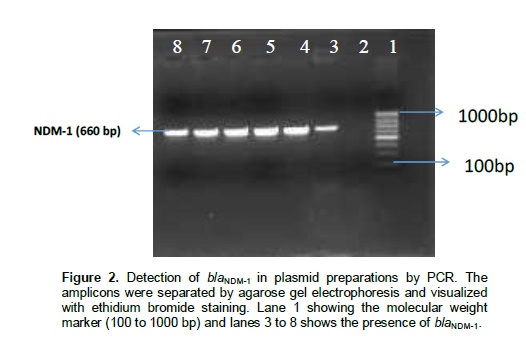 This study was financially supported by Indian Council of Medical Research (ICMR).