The occurrence of Cysticercus bovis at Gondar ELFORA Abattoir, Northwest of Ethiopia

A cross-sectional survey was undertaken in the abattoir to study the prevalence of Cysticercus bovis in cattle originated from different localities and to determine the cyst prevalence as well as distribution in different organs within infected animals in Gondar ELFORA abattoir. Out of the total 450 cattle slaughtered and examined at Gondar ELFORA abattoir, 9 animals (2.0%) were identified positive for C. bovis infection. Predilection sites for C. bovis were observed and their relative infestation rates were recorded. As a result of this study, predominantly cysts were found on shoulder muscle (55.56%) followed by masseter muscle (33.33%) and tongue (11.11%). The prevalence and occurrence of C. bovis was also studied based on the geographical locations of slaughtered cattle. Accordingly, cattle from low lands and high lands had showed a prevalence of 6.45 and 0.307%, respectively. In conclusion, C. bovis is prevalent and is one of the major parasitic diseases that causes huge carcass condemnation of slaughtered animals and poses serious financial lose in the socio-economy of the study area. Therefore, public health awareness should be created on improving personal and environmental hygiene for breaking the life cycle of the disease.

Bovine cysticercosis is a muscular infection of cattle and is caused by larvae of the human intestinal cestode Taenia saginata. Its life cycle is entirely dependent on the link between man and cattle so that any break in this links can result in the total elimination of the parasite. Tapeworm infections have been recorded in history from 1500 BC and have been recognized as one of the earliest human parasite (Urquhart et al., 2013).

Cysts of C. bovis can be found anywhere in the carcass or meat and viscera (Gracey et al., 2014). The distribution of T. saginata is wider in developing countries where hygienic conditions are poor and where the inhabitants traditionally eat raw meat or insufficiently cooked meat (Fralova, 2014; WHO, 2015).

Forty percent (40%) of the cases was reported in Africa (Fan, 2006;  Fralova,  2014).  Researchers  reported  that this disease being very common in developing countries like Ethiopia. It is associated with poor hygiene and local factors including cultural background, (eating raw meat “Kurt”, Kitfo” semi cooked meat), economic condition and religious beliefs, close proximity of humans to cattle kept with little or no distinction between companion or utility functions (Fralova, 2014).

Slaughtering is often carried out in open air in absence of abattoirs (Fralova, 2014). Transmission of the parasite occurs most commonly in the environment characterized by poor sanitation, primitive livestock husbandry practice and inadequate meat inspection, management and control police (Mann, 2014).

Bovine cysticerosis is responsible for considerable amount of economic losses which can approach 30% when allowance is made for the loss in the carcass weight and the cost of freezing for the infected meat (Pawlowski and Schuitz, 2013). The health caused by the adult worms in human gives rise to high medical costs (Pawlowski and Schuitz, 2013). Generally, the loss is determined by disease prevalence, grade of the animals infected, potential markets, prices of cattle and treatment costs for detained carcass (Gruindle, 2012) and medical costs for infected human beings (Fan, 2011). The average annual loss due to taenicidal drugs for treatment in Ethiopia was estimated to be 4,937,583.21 ETB or 225, 036.97 USD (Fufa, 2012; Dawit, 2012; Ahmed, 2015). Bovine cysticercosis is widely distributed in Ethiopia and a number of individuals reported the prevalence of bovine cysticercosis in different parts of the country. According to these reports, a prevalence of 6.4% in Kombolcha Elfora by Alemneh (2015), 9.7% in Gondar by Dawit (2012), 21% in Nekemte by Ahmed (2015), 13.85% in Debre Zeit by Getachew (2013), 19.5% in Bahir Dar by Mulugeta (2012), and 3.2% in different agro climatic zones by Tembo (2012) was recorded.

The nation’s domestic meat consumption of about 45% comes from cattle, which generates export income mainly from the sale of live animals (EARO, 2015).

On the other hand, the contributions of C. bovis to organ condemnation in slaughtered cattle at different abattoir have been reported (Fekadu, 2015; Mezgebu, 2015). It is a great problem in developing countries like Ethiopia due to the cultural habit of eating raw meat in form of “kurt” and “kitffo” as routine dish during holidays that has promoted the spread of human taeniasis in the country (Gebreemannel, 2012). The above mentioned problems allow the parasite to continue its life cycle till to date and in the coming future (Eckertl, 2013).

Although Gondar is one of the metropolitan cities in Ethiopia that large numbers of cattle are slaughtered and used for home consumption, only few works have been done on bovine cysticercosis. Therefore, the objective of this research is to determine the occurrence and prevalence of bovine cysticercosis in Gondar ELFORA abattoir and to see the association  of  the  prevalence  of  the parasite with the risk factors.

The study was conducted in North Gondar, North western part of Ethiopia. It is divided into three major agro-climatic zones: highland, mid-highland and lowland. The altitude ranges from 4620 meters in the Semen Mountain in the North to 550 m in the west. The rainfall varies from 880 to 1772 mm with a mono-modal distribution, while the minimum and maximum temperatures are in the order of -10°C in the highland and 44.5°C in the West. The area is also characterized by two seasons, the wet season from June to September, and the dry season from October to May (Figure 1). 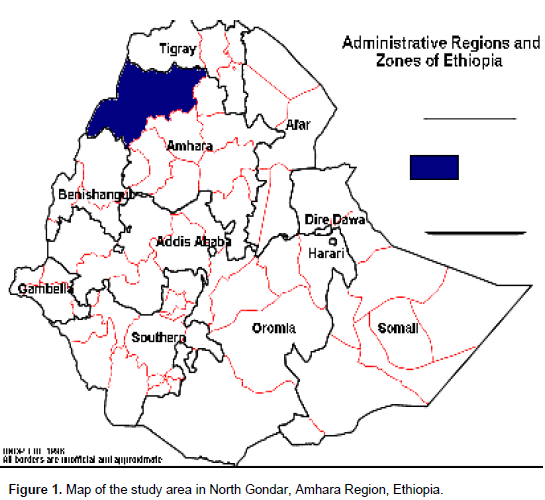 The farming system of the study area is characterized by a mixed crop-livestock production system. Transhumance, from the highlands to western lowlands, is practiced as an important strategy to secure grazing resources for the highland livestock during the dry season of the year. In the case of the lowlands, crop farming is not as intensive as high and mid-highland areas and livestock has larger contributions to the farmer’s livelihood.

The study animals were cattle coming to Gondar ELFORA abattoir for slaughter. Simple random sampling method was used for sampling and using the 95% confidence interval the sample size were determined by the formula (Thrusfield, 2005):

During the period of this study, ante mortem and postmortem examinations were performed on 450 cattle in Gondar ELFORA abattoir. For the ante mortem examination, general condition of the animal was observed by visual inspection and age, breed as well as origin of the animal were recorded. Out of the total 450 cattle, 124 were from low land localities and the rest 326 cattle were from high lands. All cattle that were subjected to the abattoir during the study period were old aged and males.

In this abattoir survey, random sampling technique was followed to select the animal to determine the prevalence of bovine cysticercosis in the study area.

During the study period, bovine carcasses were randomly examined  for  the  presence  of  C. bovis  following  the   customary meat inspection procedure stipulated in the minister of agriculture meat inspection regulation (MOA, 2015). There were visual inspections and palpations followed by multiple incisions of each organ (heart, tongue, shoulder, liver, masseter and diaphragm muscles) to examine the cysts of C. bovis. In positive cases the site and infestation of cyst were recorded. One deep incision into triceps muscle of both sides was made. Similarly, tongue surface was examined by palpation then the inside part was examined by making deep incision in the ventral part of the tongue. The pericardium of the heart was opened and incision was made into the cardiac muscle from the base to the apex. Several deep incisions in to the internal and external muscle were made parallel to the plane of jaw in the masseter muscle. Moreover, the kidneys, spleen, liver and the lungs were inspected in the usual methods of inspection.

Out of the total 450 cattle examined at the abattoir, 9(2.0%) were found to be positive for Cysticercus bovis.

Occurrence of C. bovis in different organs of cattle

Similarly, this study significantly showed that from the observed old aged cattle, the most affected organ was shoulder muscle, followed by the masseter muscle and tongue.

Out of the total 450 carcasses inspected, 5 were found to harbor cysts of C. bovis with an overall prevalence of 2.0% in various organs.

Though the prevalence of C. bovis is low in developed countries (Onyango et al., 2012), the infestation rate is often around 30% in developing countries like Africa.

However; in the present study, the rate of occurrence of C. bovis in Gondar was found to be 2.0% which was lower than the study made by Dawit (2012).  This might be because of the differences in the experiences of meat inspectors as well as variations in veterinary services deliveries and peoples’ awareness on the prevention of the disease in different localities. Moreover, in the routine inspection of beef carcasses, there was practical limitation to the degree of incision permissible for gross mutilation that decreased the marketability of the carcass as a result of which many infestations remained undetected.

In Ethiopia, various studies and reports revealed that the rate of infestation of cattle by C. bovis was different and higher than the current study in various agro-ecological zones. For instance, Natnael (2014) in Debre Zeit Elfora export abattoir reported 22.75%, Fufa (2012) in Hawassa municipal abattoir reported 26.25%, Hailu (2012) in East Shoa reported 17.5%, Ahmed (2015) in Nekemte municipal abattoir reported 21%, and Getachew (2013) in Debre Zeit abattoir reported 13.8%. Likewise; the occurrence is higher in different African countries. For instance, 20% in Senegal, 27% in Tanzania, and 38% in Kenya was reported (Over et al., 2012). In this study, the  assessment of occurrence of C. bovis based on the origin of cattle (high land and low land) had been done and among those animals submitted to the abattoir and inspected 326 cattle (72.44%) were from highlands and 124 (27.56%) were from low lands. The rate of C. bovis occurrence in the highland animals were 0.307% and in the lowland cattle were 6.45%. The variation in the rate of occurrences in different altitudes might be related to the less resistance of the egg of the parasite (tape worm ova) to survive in the cold grazing environmental conditions of highlands for longer periods.

C. bovis is commonly found in muscle of mastication, particularly masseter muscle, shoulder muscle, heart, tongue, diaphragm and occasionally in fat, liver, lungs and lymph nodes. However, in the present study, cysts were found on shoulder (55.56%), masseter (33.33%) and tongue muscles (11.11%). From several reports, variation and deviation in localization of cysts were quite possible. For instance, in Addis Ababa abattoir, the infection rate of C. bovis was high as 16.3% in foreleg (Gebreab, 2014). Some reports from Shoa Oromia Regional State showed 4.7% in liver and 0.7% in lungs (Hailu, 2012). On the other hand, Hailemariam (2013), and Amsalu (2013) indicated that examination of the tongue was the most effective means of detection for bovine cysticercosis

In general, this study confirmed the occurrence of Bovine cysticercosis in different origins of cattle slaughtered at Gondar ELFORA abattoir. However, the prevalence was lower as compared to previous studies performed in other parts of Ethiopia. Although we could not compare the prevalence of C. bovis in relation to sex, age and body conditions of animals, cattle from low lands were found more prevalently infected than those originated from high lands. In general, veterinarians and medical professionals ought to work in collaboration for the control of this disease. Similarly, public health awareness should be created through public media on improving personal and environmental hygiene for breaking the life cycle of the disease. Further detailed study by considering various age groups, sex and breads shall be conducted to know the prevalence of the disease in the area in relation to different parameters.

The authors have declared that there is no conflict of interests.

The authors express their special thanks to Dr. Seleshe Nigatu (DVM, MVSc), Gondar ELFORA Abattoir and University of Gondar, Faculty of Veterinary Medicine Instructors for their material and logistic supports to bring this research to completion.