It has been years that scientists and doctors are looking for biomaterials with adequate mechanical properties and biocompatibility to use in human body as a replacement for bones, joints, hips, etc (Sedmak and Rakin, 2006). Recently, in order to investigate the characteristics of nanomaterials a few books are published. Among those, “Nanomaterials and polymer membranes: Synthesis, characterization, and applications” is submitted by Saleh and Gupta (2016), and “Nanotechnology in oil and gas industries: Principles and applications” is presented by Saleh (2018). Furthermore, in the field of nanomedicine “Aptamer-drug-conjugate: Targeted delivery of doxorubicin in a HER3 aptamer-functionalized liposomal delivery system reduces cardiotoxicity” is provided by Dou et al. (2018). In order to investigate the environmental effect of human body on biomaterials, many experimental procedures are performed (Dewidar, 2012). In 2017, the role of metallic materials as biomaterials in human body is introduced by Santos (2017). Metallic materials can be used in artificial valves in the heart, stents in blood vessels, replacement implants in shoulder, knees, hips, elbows, ears and ortho-dental structures (Santos, 2017). Recently, Titanium alloys have attracted many researchers due to their excellent biocompatibility (Wang and Xu, 2017; Findik, 2017). Furthermore, numbers of investigations are performed to characterize the corrosion and fatigue resistance of Titanium and Magnesium alloys.
The reason behind this is that corrosion of metallic materials in human body is one of the important issues that need to be studied. This is due to the corrosive environment of human body fluid. In addition, fatigue is due to the cyclic loads in human body as a result of dynamic loads such as walking, running, etc. Among the investigations in this area, “comparative corrosion behavior of Titanium alloys for dental implants” is provided by Lopes et al. (2016). “Resistance of Magnesium alloys to corrosion fatigue for biodegradable implant applications” is submitted by Raman and Harandi (2017). In addition, “fatigue and corrosion fatigue of Ti-6Al-4V implant grade Titanium alloy in ringer solution” is presented by Yazdani et al. (2017). Moreover, many attempts have been done to improve the corrosion and fatigue resistance of biomaterials in human body fluid. One of the methods to increase the corrosion resistance is formation of stable oxide surface layer on biomaterial. Furthermore, it has been discovered that the factors which increase the tensile strength, can also improve the fatigue strength as well (Hosseini, 2012). In addition, in 2013, “effect of microstructure on the fatigue properties of Ti-6Al-4V Titanium alloys” is recommended by Wu et al. (2013). However, currently, further researches are performed to evaluate the fatigue life of implants and stents. Among these studies, “Material fatigue research for Zirconia ceramic dental implant” is provided by Karacali (2015), “Fatigue of metallic stents: From clinical evidence to computational analysis,” is published by Auricchio et al. (2016), and “Fatigue life prediction of Titanium implants with Titanium dioxide surface” is submitted by Major et al. (2017).
Furthermore, recently, numbers of studies to predict the fatigue life and failure of materials are provided by Anvari (2014, 2017a, b, c, d). As mentioned in the previous paragraphs, many efforts have been made to evaluate the fatigue life of biomaterials in human body fluid. However, it seems that the exact consideration of biomaterials such as Magnesium and its alloys based on fatigue life in human body fluid is still needed to be performed to obtain the relations and cycle numbers of fatigue life in different stress values in human body. However, these results can help doctors choose the best biomaterials for the implantation surgery, and as a result, the second surgery for implantation removal might be eliminated. In the presented research, the goal is to provide a method to estimate the fatigue life of Magnesium and its alloys in human body fluid. Equations to predict the fatigue life are achieved and the cycle numbers for the end of fatigue life are obtained based on analytical method. The cycle numbers for the end of fatigue life can be very advantageous for doctors to treat patients professionally with minimum numbers of surgeries and eliminate the surgery for implantation removal. This is of high significance because sometimes patients are weak or too old for second surgery. In addition, in some cases, the surgery is very inconvenient for doctors or patients or both of them.

BIOMATERIALS IN HUMAN BODY AS IMPLANTS 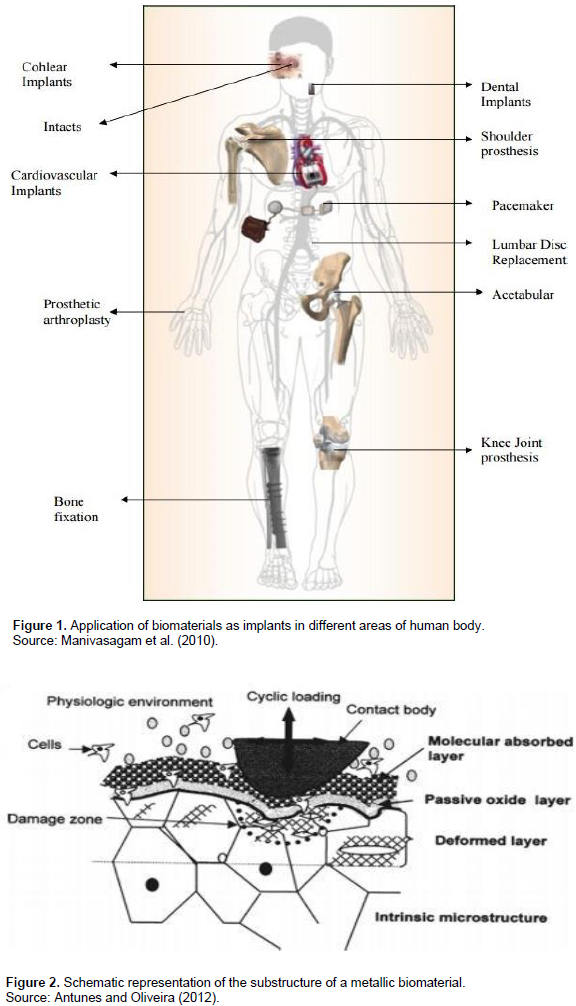 Materials and specimen preparation
The experimental materials were high purity magnesium (99.99 wt. %, denoted as HP-Mg), Mg–1Ca and Mg–2Zn–0.2Ca all in extruded rods with an extrusion ratio of 11. The raw ingot of HP-Mg was provided by Hebi Wuhua Magnesium Processing Co. Ltd., China. Plate tensile specimens with a gage length of 25 mm and smooth-faced fatigue specimens (surface roughness: 0.3 lm) with a circular cross-section 5 mm in diameter and a gage length of 10 mm were machined parallel to the extrusion direction according to ASTME8-04 and ASTM-E466-96, respectively. Specimens for microstructural characterization were cut perpendicular to the extrusion direction into 2 mm in thickness and 10 mm in diameter disks (Bian et al., 2016).
Microstructural characterization
Disk specimens were mechanically polished with SiC abrasive papers from 400 grit to 2000 grit gradually, then chemically polished into mirror-like surface with the mixture of 2 ml chlorhydric acid, 3 ml nitric acid, 5 ml acetic acid and 20 ml glycerol. Phase constituents were characterized by X-ray diffraction analysis (XRD, Rigaku DMAX 2400) using Cu Ka radiation at a scan rate of 4°/min operated at 40 kV and 100 mA. After etched in 4% nitric acid alcohol solution, the samples were observed under a scanning electron microscope (SEM, HITACHI S-4800) (Bian et al., 2016).
Fatigue test in simulated body fluid (SBF)
As for the corrosion fatigue, a self-designed dynamic circulation system was utilized to monitor the corrosion fatigue environment. This system consisted of three main parts: an acrylic chamber that 352 D. used to keep the specimen (only gage length part) immersing in SBF solution, a temperature controlling apparatus that used to keep the temperature of SBF at 37 ± 1°C, and a pump to generate the flow (65 ml/s). During the corrosion fatigue test, the SBF solution was replaced every 24 h and the dissolution of magnesium and alloying elements into the retrieved SBF was measured until sample failure by inductively coupled plasma atomic emission spectrometry (Leeman, Profile ICP-AES) (Bian et al. 2016). As it is clear, the purpose of this experiment is to measure the fatigue life (cycle numbers to failure) for magnesium and its alloys in the presence of the SBF. In order to make the simulation of the human body environment, dynamic loads (cyclic loads) are applied to the specimen (Magnesium and its alloys) in SBF. As mentioned previously, cyclic loads in human body can be due to walking, running, exercising, etc.

CYCLE NUMBERS TO FAILURE IN SBF 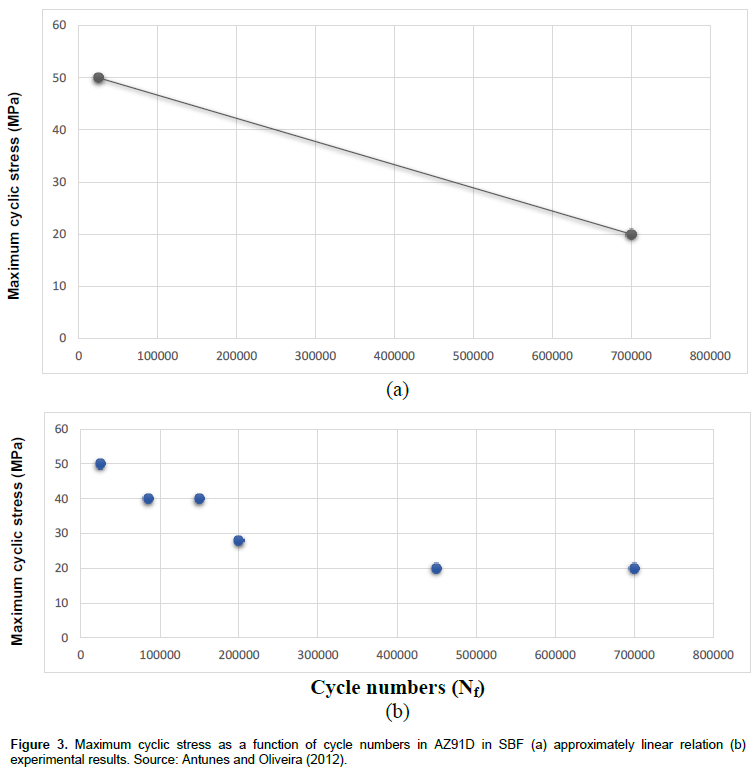 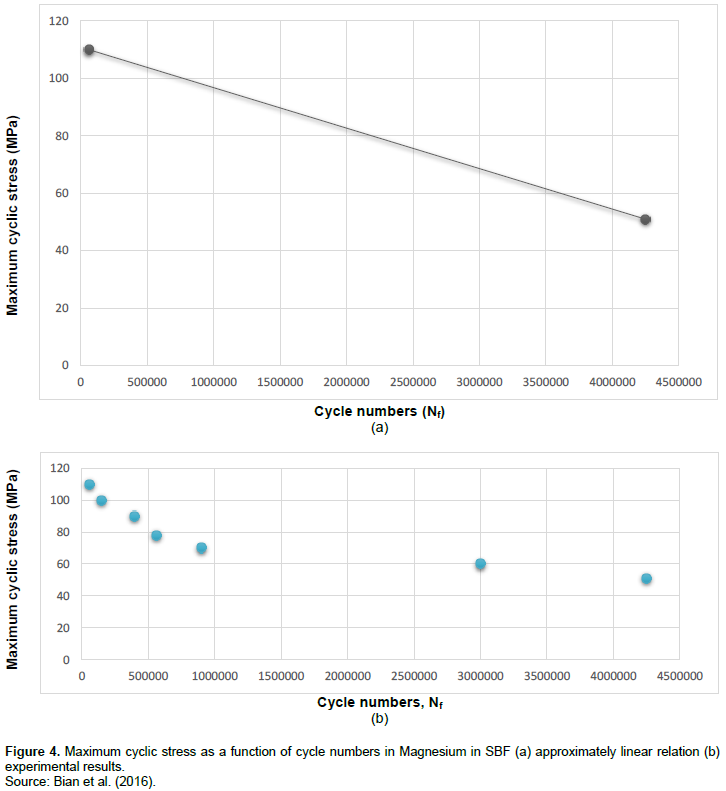 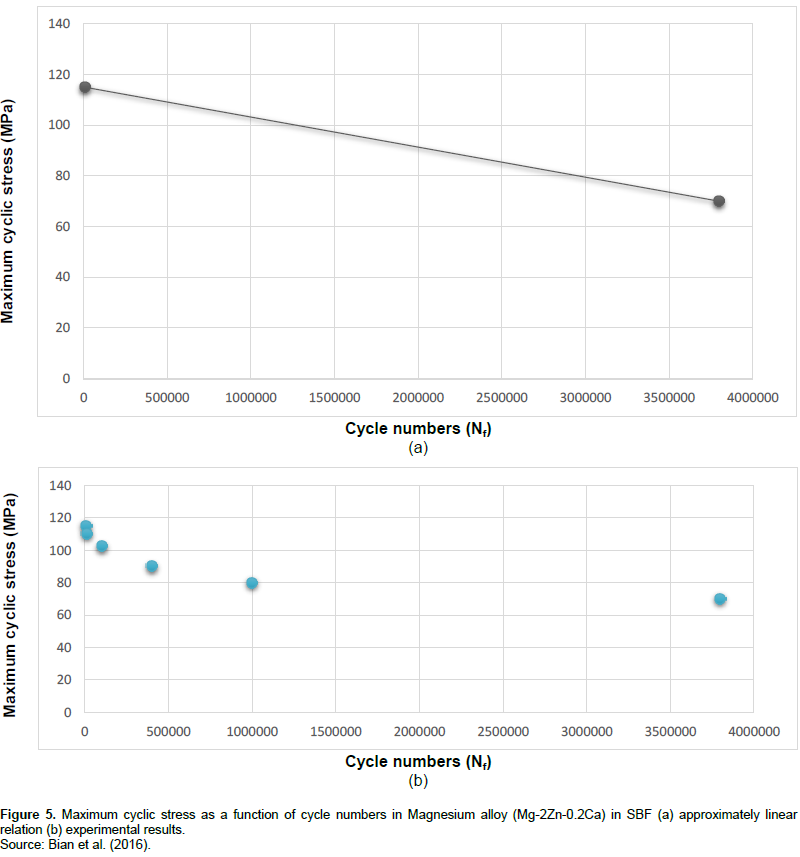 The authors appreciate the opportunity of performing this research in University of Missouri-Columbia. All the funding related to this research is provided by the presented author.