A field experiment was conducted on twelve sorghum genotypes against one local and two standard checks at Haro Sabu Agricultural Research Center (HSARC) sub sites for three consecutive years (2016-2018) using randomized completely block design (RCBD) to evaluate and select high yielding sorghum genotypes and to assess the impact of genotype by environmental interaction on grain yield and yield components across diverse growing environments of western Oromia. Eight agronomic traits and three economically important disease reaction were collected depending on the crop descriptor. Pooled over locations analysis of variance detected significance difference among tested genotypes for all collected traits. Genotype by environment interactions (G×E) significantly affected all recorded traits excluding days to heading and thousand seed weight. Genotype and genotype by environment interaction (GGE) bi-plot analysis revealed that G3, G11 and G12 as ideal genotypes in terms of yielding ability and stability and were promoted as candidates for possible release and use as genetic resource in future breeding programs.

Among grain crops cereals are the major food crops in Ethiopia, both in terms of the land coverage and volume of production (CSA, 2016). Sorghum is the most widely grown food crop in Ethiopia.  It thrives in a range of agro-climatic zones including high and low altitudes. High altitude sorghums grow satisfactorily at altitudes  as  high as 2,300 m where mean temperatures range from a minimum of 14 to 26°C. Sorghum (Sorghum bicolor L.) is an important drought tolerant rain fed cereal largely cultivated for food, feed and fodder by subsistence farmers in Ethiopia (Ayana et al., 2000). The national average   production   of  sorghum  is  2.5   tonha-1  (CSA, 2016).Of the total national sorghum production (432,3299.8 ton), Oromia region shares production (1,884,630.1 ton) of sorghum which is almost about half of the total annual production of the country (CSA, 2016). In sub Saharan Africa and south Asia sorghum is consumed as staple food and is also used in the production of a variety of by-products like alcohol, edible oil, and sugar (Wang et al., 2008). It is used as food, feed, beverage, and its stalk was used for construction of fences in Western Ethiopia and surrounding vicinities. It has a dense and deep root, has ability to reduce transpiration through leaf rolling and stomatal closure among others which in turn makes the crop to survive dry spelling periods. Hence sorghum has become a strategic crop in the face of climate unpredictability across different sorghum growing environments. In spite of all these advantages, sorghum has been a neglected crop, both at national as well as global level and the sorghum crop production is still very low (Stemler et al, 1977).

Among figurative problems, a biotic and biotic factor, the effect of genotype by environment interaction and stability of released varieties across the growing environments are the major one (Tesso et al., 2004; Girma et al., 2010). It is recalled that genotype and genotype by environment interaction (GGE) bi-plot is the most recent approach for analysis of G×E and ever more being used in G×E studies in plant breeding research (Yang et al., 2007). The GGE bi-plot model was used extensively in quantitative genetics and plant breeding (Yang et al., 2007). Additionally, the additive main effects and multiplicative interactions (AMMI) model are also defined as powerful tools for effective analysis and interpretation of multi environment data structure in breeding programs. In most cases plant breeders faces instability of yield when genotypes were grown in different environments due to G×E. Therefore, multi -environment trials (MET) are required to identify specific and the general adaptability pattern of genotypes. The aim of the present study was, therefore, to examine the stability and yielding performance of sorghum genotypes s and to identify stable and high yielding cultivar for wider cultivation.

Twelve sorghum genotypes were tested against one local and two standard checks (Table 1) were evaluated for three (2016-2018) cropping seasons at Haro Sabu agricultural research center on station, Hawa-Galan Farmers Training Center (FTC), Kombo FTC, and Guliso FTC of Western Oromia, Ethiopia (Table 2). The trial was planted in randomized completed block design (RCBD) with three replications. Each plot consists of six rows (with four harvestable rows) having 3 m plot length with inter-row and intra-row spacing of 0.75 and 0.15 m, respectively and 2 m spacing was used between each block. A seed rate of 25 kgha-1 and recommended fertilizer was applied. All other agronomic practices were performed as per the recommendation for the crop.

Five plants were selected randomly before heading from each row (four harvestable rows) and tagged with thread and all the necessary plant based data were collected from these sampled plants.

Where, Yij is the yield of the ith genotype in the jth environment;

is the grand mean; gi and ej are the genotype and environment deviations from the grand mean, respectively; λk is the eigen value of the PCA analysis axis k; αik and γij are the genotype and environment principal component scores for axis k; n is the number of principal components retained in the model and εij is the error term.

AMMI stability value of the ith genotype (ASV) was calculated for each genotype according to the relative contribution of IPCA1 to IPCA2 to the interaction SS as follows (Purchase et al., 2000):

Where, SSIPCA1/SSIPCA2 is the weight given to the IPCA1 value by dividing the IPCA1 sum of squares by the IPCA2 sum of squares. Based on the rank of mean grain yield of genotypes (RYi) across environments and rank of AMMI stability value (RASVi) a selection index called Genotype Selection Index (GSI) was calculated for each genotype, which incorporates both mean grain yield (RYi) and stability index in single criteria (GSIi) as suggested by Farshadfar (2008):

The analysis of GGE Bi-plot method was carried out for grain yield, according to the following model (Yan and Tinker, 2006).

All  agronomic  and   yield  component  parameters  were affected by environmental effect whereas all except grain yield were affected by cropping seasons. Days to maturity and head weight of genotypes were not affected across a cropping seasons and it agrees with the findings of Worede et al. (2020). Except days to heading and thousand seed weight all agronomic and yield components among tested genotypes were statistically affected across an environmental set. Statistically significant (P < 0.01) difference were documented for grain yield among genotypes, environments and G×E and it’s in concordance with the finding of Filho et al. (2014) and Worede et al. (2020)(Table 3).

The mean performance of the tested sorghum genotypes for grain yield showed fluctuation over growing seasons and environments (Table 4). It’s also noted that some genotypes consistently performed in a set of tested environments whereas some of them are irregular across locations. The highest grain yield was recorded from G11 (5.56-ton ha-1) genotype at Haro Sabu (2018) whereas the lowest was from G8 (1.27-ton ha-1) at Haro Sabu (2016). The combined over locations showed G12 as the highest yielder. In contrary, the local check included in this study was the low yielder among all tested genotypes that might be stem due to the genetic potential of the genotype (Mengistu et al., 2013). The disparity in yield rank of genotypes across the growing environments displays the prevalence of G×E interactions (Purchase et al., 2000; Yang et al., 2007). 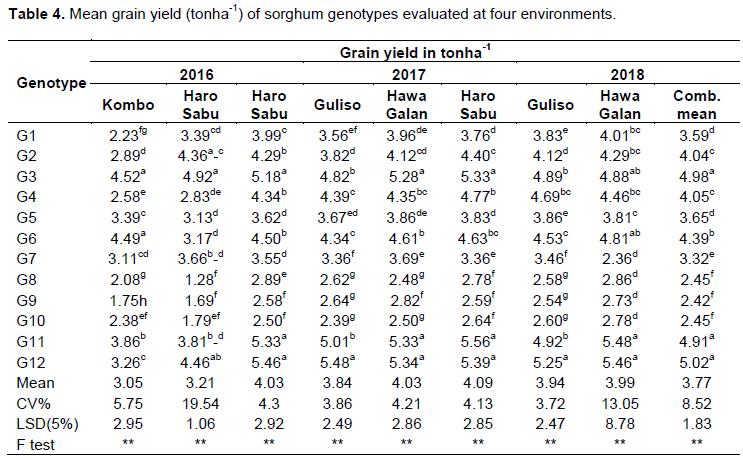 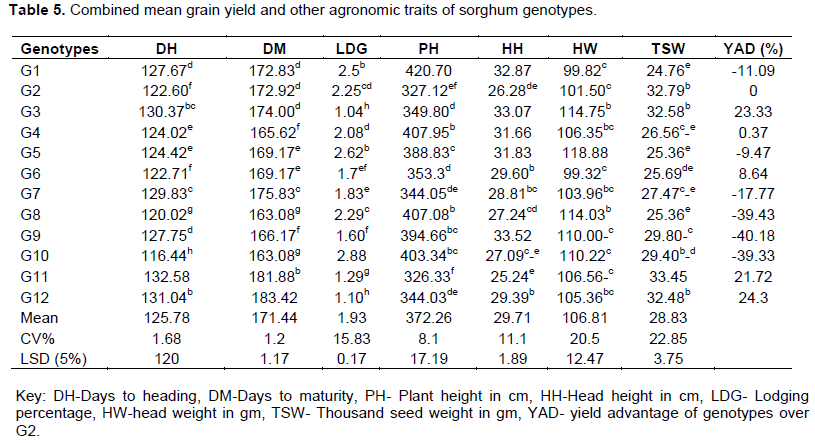 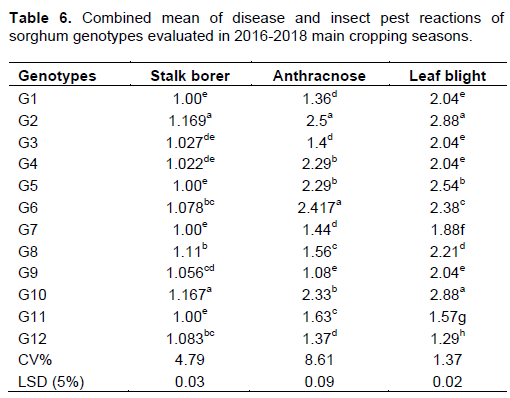 The genotype, environment and genotype by environment interaction explained 23.1, 69.5 and 7% of the total variation indicating the prevalence of considerable environmental variation. The interactive principal component axis (IPCA-1) and IPCA-2 axis of the G×E were highly significant  (P ≤ 0.01). The first principal component managed over 68.6% of the G×E sum squares while the second principal component revealed 18.6% of the interaction, and the remaining 12.8% is due to residual (noise) and it is difficult to interpret and thus need to be discarded. Considerable percentage of G×E was explained by the first two IPCA axes. Different authors suggest the importance of apprehending most of the G×E sum squares in the first axis, to attain accurate information  (Purchase et al., 2000; Kaya et al., 2002). 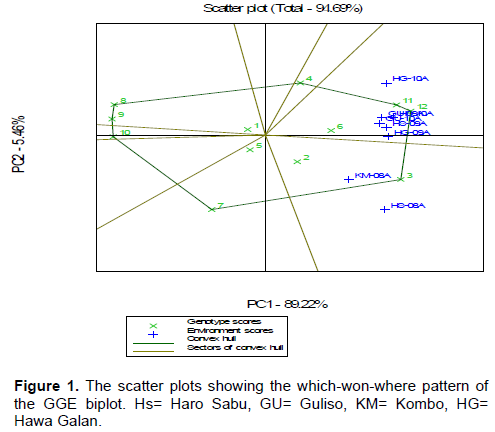 Genotype-focused scaling considers stability and mean grain yield concurrently and environments as well as genotypes that fall in the central (concentric) circle of genotype-focused scaling are considered as an ideal environments and stable genotypes, respectively (Gauch and Zobel, 1997). Genotype G3, G11 and G12 fell in and around the center of concentric circle and therefore, ideal genotypes (Figure 2). Contrariwise, G8, G9 and G10 are located far from ideal genotypes and thus they are undesirable genotypes. 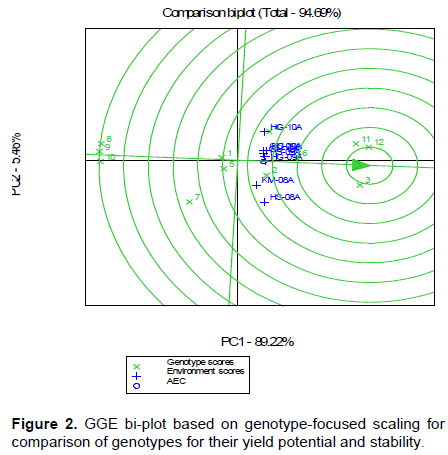 The genotypes were significantly influenced by environment, genotype and their interaction. GGE biplot and GSI index incorporating with the ASV and the yield capacity of the different genotypes in a single non-parametric index were found to be useful for discriminating genotypes with superior and stable grain yield. Depending on yield performance and reasonable stability G3, G11 and G12 genotypes were the best in the test environments and they can be used as candidates for possible release and for use as parents in future breeding programmes.