This study analyzes the profit efficiency and its determinants in groundnut production, applying a stochastic profit frontier model on survey data collected from 400 groundnut growing households in Malawi. The result indicated that the inefficiencies in groundnut production hindered profitability in the sector. The profit efficiency ranged from 1% to 89% (with a mean of 45%). Significant association was observed between efficiency and both farm specific and institutional factors. Efficiency appeared to be significantly and positively associated with access to extension service (p<0.05), household size (p<0.05) and, soil quality (p<0.000). Distance to the local market from the homestead (p<0.000), and land size (p<0.000) allocated to groundnut production were found to reduce the profit efficiency. Male-headed households, on the average were six percent more efficient compared to female headed households. The study indicated potential for increasing groundnut profitability by 55% by improving the access to extension services and markets, which underscores the need for increased resource allocation to support the delivery of extension services and to the improvement of market infrastructure for the enhancement of groundnut profitability. 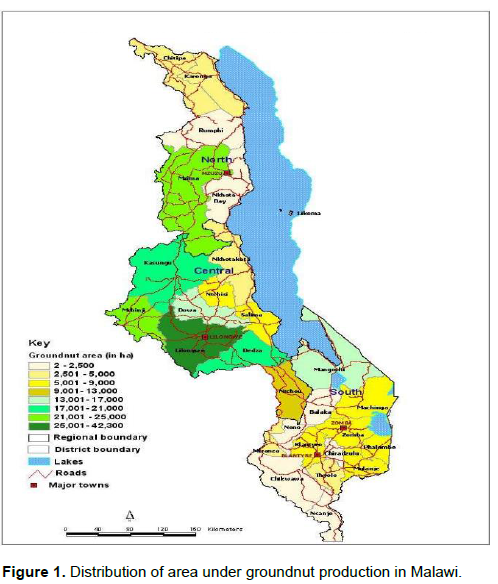 Where  is normalized profit (revenue less variable cost) of  groundnuts producing farmer divide by farm-specific (per kg groundnut price);  is the vector of input prices (labor, seed, fertilizer, manure) paid by farmer divided by the output price;   is a vector of fixed inputs of  farm household; and  is an error term for i=1, 2…, n is the number of households in the sample. The error term  has distribution consistent with the assumption of the frontier function, means that,    is the difference in statistical (noise), , term and inefficiency term, . Thus  can be presented as follows:

Where  is independently and identically and normally, , distributed two sided random errors, independent of s and the  are the non-negative random variables associated with inefficiency in production function;  are independent and zero truncated normal distribution with mean  and variance of , where  is the variable associated with inefficiency of  household; and  and  are unknown parameters to be estimated. The profit efficiency of  farm household in the context of stochastic frontier profit function is defined as:

Characteristics of groundnut producers
Table 1 presents a summary of variables used in the profit efficiency analysis. It is evident that per household profit was very small and the production volume was also small. On average, households produced 196 kg of groundnuts and generated a profit of 13,270 Malawian Kwacha (MK) or $22.57 per year. The average per kg groundnut price is 52 MK. The average price of fertilizer and seed about was MK17 and MK50, respectively. The average land cultivated was 5.22 ha and an average of household size of 5. The majority (77%) of the respondents in the groundnut production system in Malawi were male-headed households (Table 1). On average a farmer has to travel 1.24 km to the nearest local market. Only, 5% of the groundnut producers received extension service (Table 1). The fact that the majority of sampled households were not getting extension services has a negative implication for modernizing agricultural production and for the enhancement of productivity by smallholder farmers. About 15% of the respondents had poor soil quality, while about two-third, reported having medium quality soil. The remaining, 21% expressed perceiving that the soil was of a good quality. 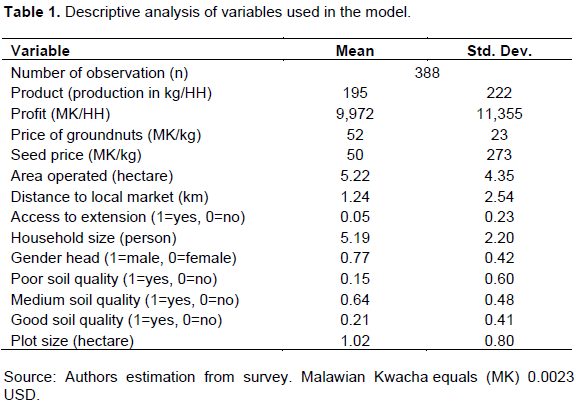 Determinants of profit efficiency
The maximum likelihood estimates on factors contributing to inefficiency and the estimated coefficients for the variance parameter are presented in the inefficiency section and variance parameter section of Table 2, respectively. The estimated variance parameter, , coefficients  were statistically significant (p<0.000) indicating that technical inefficiency were playing negative role in the groundnut production system in Malawi (Table 2). In the inefficiency model, area allocated to groundnut production was included to expound the difference in technical efficiency if any, which may arise from difference in farming scale. As the area allocated to groundnut production increases, it might lead to diminished timeliness of input used, and spreads of activities over time, one may expect difficulties for larger farmers to operate at an optimal input use level (Amara et al., 1999). The positive sign of the coefficient on the plot size (groundnut area measured in hectare) implies that the larger the area allocated to groundnut production the smaller is the efficiency level. Similar result was reported regarding the relationship between farm size and efficiency in other studies (Amara et al., 1999; Hallam and Machado, 1996; Tzouvelekas et al., 2001). 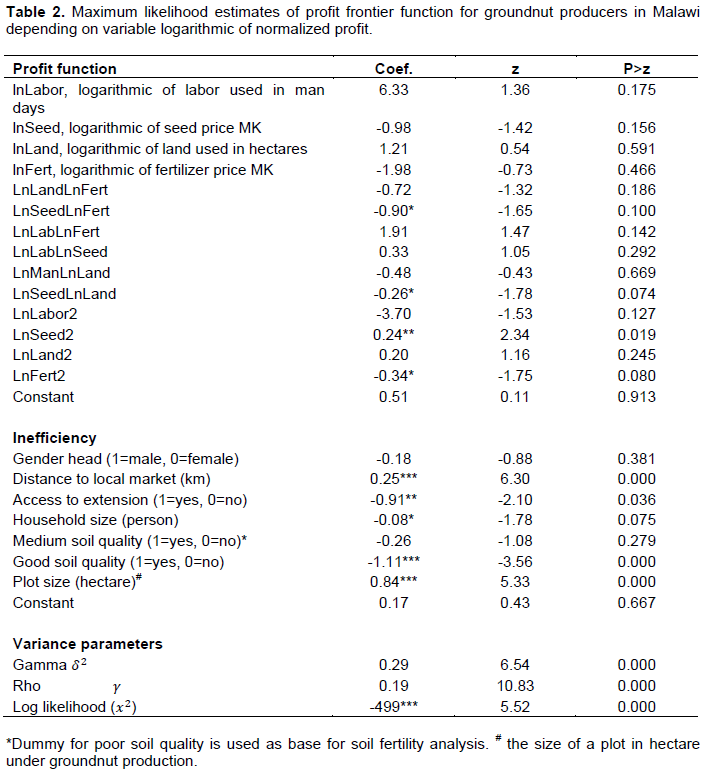 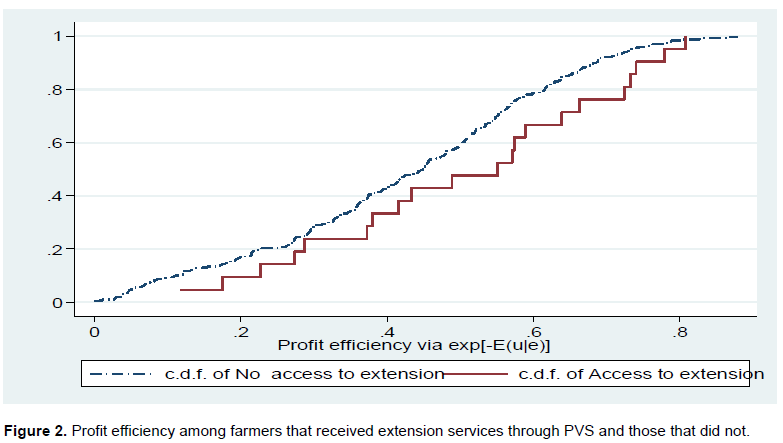 This result is consistent with the expectation as well as the previous studies such as Mango et al. (2015) and Latruffe et al. (2004), which confirms the  fact that extension service provides technical support, including practice on right input use, market information and training on improved farming techniques. The coefficient of the household size variable in efficiency model indicates that households with larger family size are more efficient in resource use. Increasing the number of residents by one person in the house increases the profit efficiency by 8%. This may be explained by the fact that groundnut production is one of labor intensive activities and family labor is an important input to increase production efficiency hence profit efficiency. Soil fertility plays a crucial role in profit efficiency; farmers growing groundnuts on good soil quality are 110% efficient compared with those who grew on poor soil.
Efficiency ranges
The average profit efficiency among the groundnut producers in Malawi is 0.45. As depicted in Figure 3, a wide range of profit efficiency is observed among the groundnut producing farmers with minimum  being  0.005  and maximum value of 0.89, which suggests that groundnut production can be increased by about 55% by improving technical, allocative or scale efficiency of farmers. This can be done through the provision of trainings on efficient agricultural input and right use. These results are consistent with  the finding in Binam et al. (2003), who observed technical efficiencies of 36 and 47% in low income region of Côte d’Ivoire using different models. The results also imply that a similar level of output can be achieved with 55% lesser input use cost. Such a deviation of efficiency is not uncommon as other studies show similar variation. The findings are also consistent with Rahman (2003) who reported  profit efficiencies of between 0.059 and 0.83 among rice farmers in Bangladesh and also consistent with Ali and Flinn (1989) who reported the mean profit efficiency of  0.72, with ranges of 0.13 and 0.95 among Basimati rice farmers in Pakistan. Other comparable studies include Wang et al. (1996) who reported  a mean efficiency of 0.62  among farmers in China  and  BozoÄŸlu and Ceyhan (2007) who reported a mean  efficiency of 0.82 among vegetable farms in Samsun province of Turkey. The distribution of groundnut producer over efficiency ranges reveals that 20% of the producers operate in efficiency range below 0.2 and only 3% operates on 0.8 and above efficiency level. About half of the groundnut producer farmers have efficiency between 0.4 and 0.7. About 50% of    the   ground   producer   has efficiency greater than estimated 0.45 efficiency; similarly, the efficiency level  of about 50% of the farm household is below 0.5 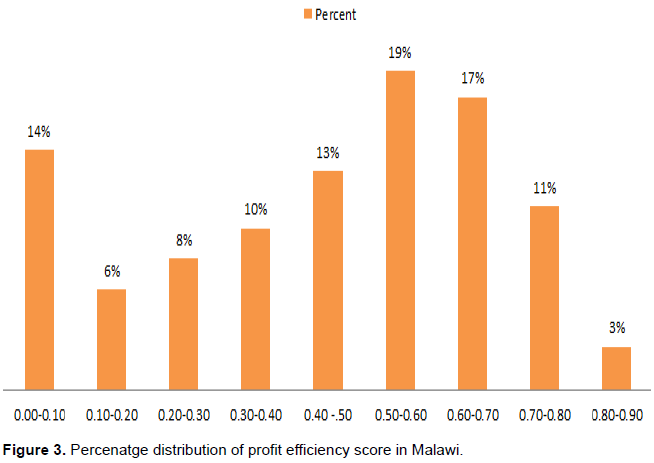 Descriptive analysis of profit efficiency for different farm and institutional variables is presented in Table 3.  Results indicate that male headed households generate 39% more actual profit and are 13% more efficient than their female counterparts, a factor attributed to higher landholding and larger production. The extension service plays an important role in improving knowledge about improved farming techniques and input use, coherently increasing efficiency (Hasan et al., 2013; Rahman, 2003). The result reveals that farmers receiving extension services generate 34% higher actual profit, 14% profit loss and are 20% more efficient than those that did not access extension services.  Larger famers (farm size>3 ha are able to generate MK10,350 as profit compared with MK9,182 for  small farmers (farm size ≤3 ha). Farmers who received extension service were 30% more efficient than those who do not. 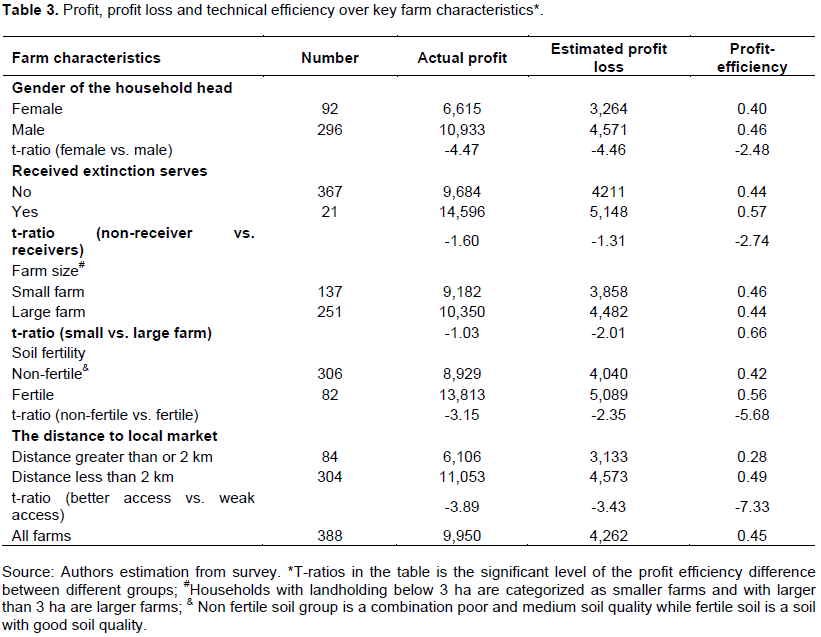 The mean actual profit for farmers living within 2 km from the local market was MK11,053 compared to MK6,106 for those who live more than 2 km away from the local market. Similarly, the mean profit efficiency for farmers with market access (proxy by distance to market) was about 50% compared to about 30% of those without market access a result that is consistent with  Ali and Flinn (1989). This can been explained by the fact that market places in Africa are an important sources of information  and other facilities located near to the market place.

To examine the profit efficiency levels and its determinants, this study applied profit frontier approach, which combines the three components of efficiency, namely, technical, economic and scale efficiency. The study used survey data collected from 388 rural groundnut producers in 2009, in Malawi. The result revealed the existence of substantial loss in groundnut production due to inefficiency. The analysis showed that inefficiency is strongly associated with both farmer specific characteristics and institutional factors. There exists a great variation on the level of profit, profit loss, and efficiency among the groundnut producers in Malawi. Gender of household head, access to extension service, household size, and farm size allocated to groundnut production, distance to market, and soil quality explain differences in efficiency. The estimated result further indicated that vast majority of producers operating at less than half of their potential. The estimated results suggest the window of opportunity to increase production of groundnuts from the current level by improving the allocative, economics, and scale efficiency by smallholder farmers. A number of factors were found to significantly explain the profit inefficiency and suggest potential target areas for improvement to achieve increased efficiency. Institutional factors such as access to extension service, and access to market raised profit efficiency.
Distance to market and larger plot size is significantly and negatively associated with the profit efficiency. The factors positively affecting profit efficiency are access to extension service and soil fertility.  Other interesting finding from this study is that, though gender of the head of household does not significantly affect the level efficiency in frontier profit model the analysis of efficiency between male and female headed household reveals that male headed households incur higher profit losses compared with their female counterpart.
In conclusion, policies and programs aiming at improving food supply and food security through improved agricultural productivity, need to place attention on factors the enhance efficiency besides the provision of agricultural technology. It is possible to increase the productivity of groundnuts with the existing level of resources, if appropriate strategies were designed to improve the efficiency such as strengthening the extension service delivery systems and intervening through improved management and agronomic practices. It is also important to improve market infrastructure to create marketing incentives for surplus production, and to increase the market participation of by smallholders which will further improve and diversify their income generating sources.