Antidiabetic properties of Moringa oleifera: A review of the literature

The incidence of diabetes has been growing over the years with serious and costly consequences, both in terms of human and economic capital, particularly in low- and middle-income countries. Medicinal plants could be usefully included in the treatment of diabetes in an optimized strategy for better cost-effectiveness, given the high cost of pharmaceuticals and their side effects on patients. A total of 36 studies (articles, thesis and final dissertations) were included in the review, including 67% of ethnobotanical studies and 33% of biological and clinical trials. In ethnobotanical studies, the different parts of the plant (leaves, seeds, fruits or pods, flowers, bark and roots) were cited in all series. In contrast, in the bioassays, only leaves, seeds and roots were used in the experiments. However, leaves remain the most widely used organ, with an efficacy that has been demonstrated in bioassays confirming ethnobotanical surveys. In view of the results collected, in-depth studies on the use of M. oleifera in the management of diabetes particularly in Sahelian countries would be relevant in the fight against the double burden of malnutrition.

Several plant species are used by humans for their nutritional and/or medicinal qualities. According to the World Health Organization (2002), 80% of the world's populations use traditional medicine and medicinal plants for health care in various forms. Africa has a significant diversity of medicinal plants. Some of these plants are used in the treatment of diabetes.

Diabetes is a metabolic disease characterized by chronic hyperglycemia resulting from abnormalities in insulin secretion, insulin action or both, with serious consequences. According to estimates by the International Diabetes Federation, there were 425 million people with diabetes worldwide in 2017, including 16 million in Africa (International Diabetes Federation 2017). Based on country profile data for diabetes (World Health Organization 2016), diabetes prevalence was estimated at 5% in Mali, 4.1% in Niger, 4.2% in Burkina Faso and 5.1% in Senegal.

Moringa oleifera is a plant of the West African pharmacopoeia (West African Health Organization (WAHO), 2013), belonging to the Moringaceae family. It has  been  used  for  a  millennium (Khawaja et al., 2010) and originated from Arabia and India. It is particularly resistant to many climatic conditions (Fortin et al., 2009). It is used in human food (Sarr et al., 2012; Mawoumaand Mbofung, 2014), as fodder for livestock (Altom et al., 2018; Belhiet al., 2018), aquaculture (Hêdji et al., 2014), in phytotherapy for the treatment of many diseases in several countries, particularly in sub-Saharan Africa, in water purification (Bundiand Njeru, 2018), as biodiesel (Mirhashemi et al, 2018), and bio-pesticide. It can be found in several West African countries where it is associated with market gardening (Rabo et al., 2015).

Our sources are mainly composed of articles, final dissertations, and thesis.

For internet searches with databases, we used the following keywords and associations, in French and English: “diabetes mellitus”, “Moringa oleifera”, “Moringa oleifera” AND “diabetes mellitus”, “medicinal plants” AND “diabetes mellitus”. We also created an alert on Google Scholar with the same keywords.  We have included in our review only studies less than or equal to 10 years (January 2009-July 2019). We identified 318 documents (Figure 1). After application of inclusion criteria, 92 abstracts were reviewed. After eliminating those deemed irrelevant for the theme and duplicate, we obtained 36 publications. The data  analysis  was carried out using a spreadsheet to highlight the raw data, the percentages of use of each part of the plant, the dosages used in bioassays. 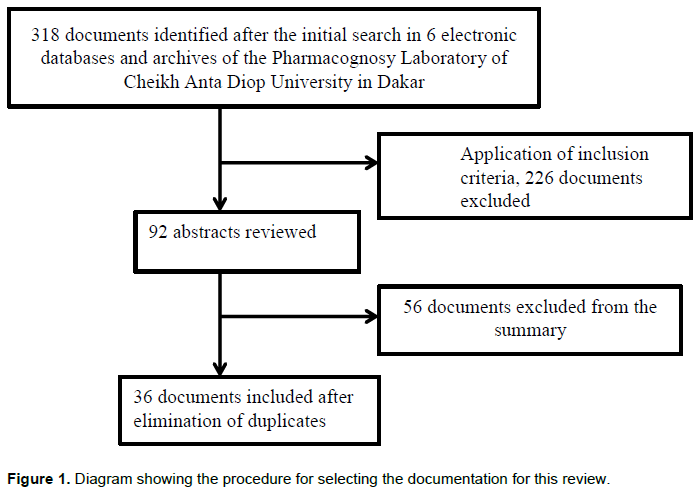 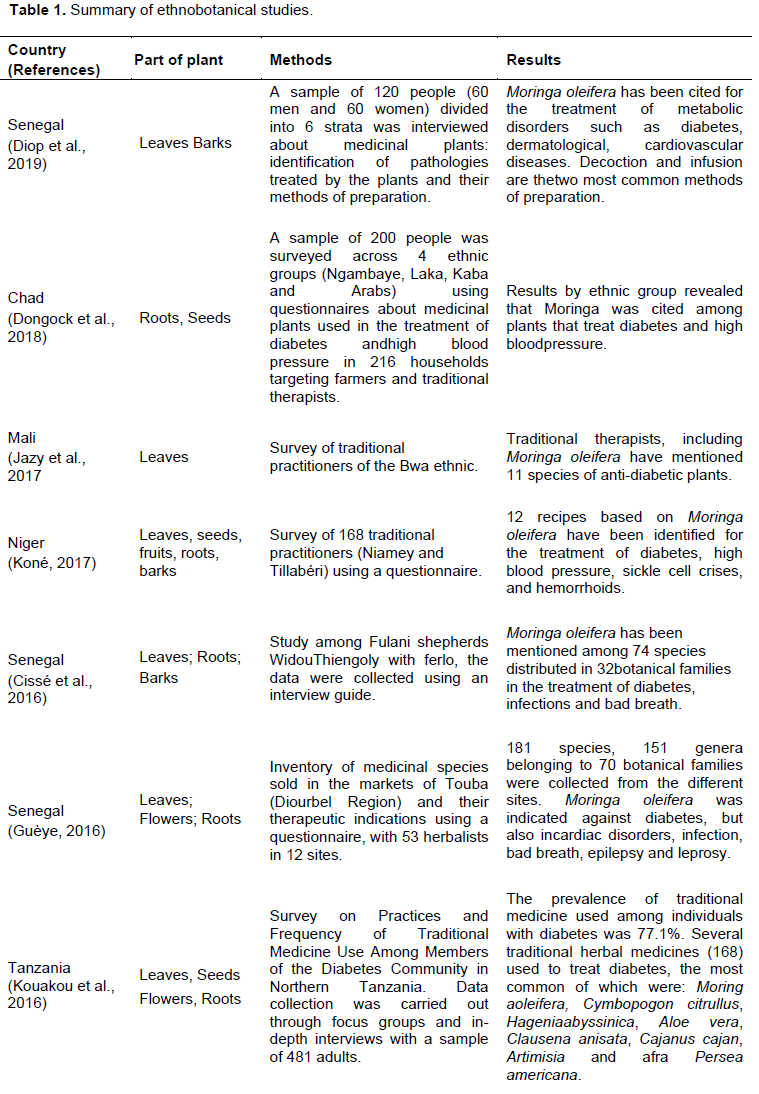 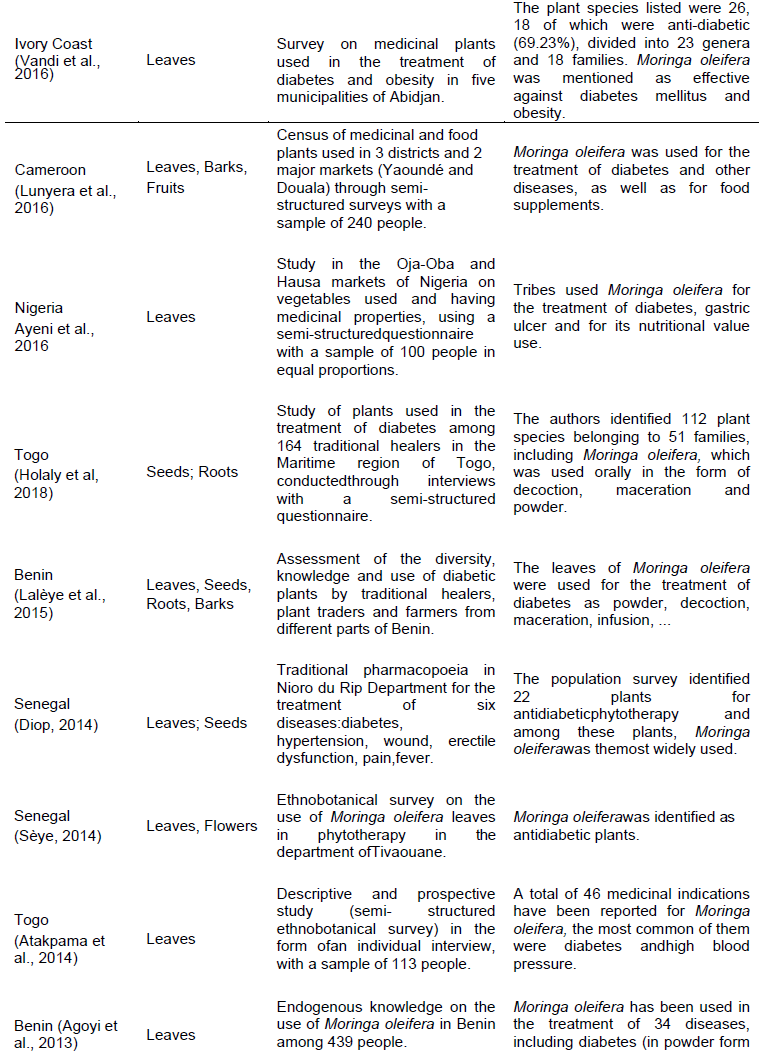 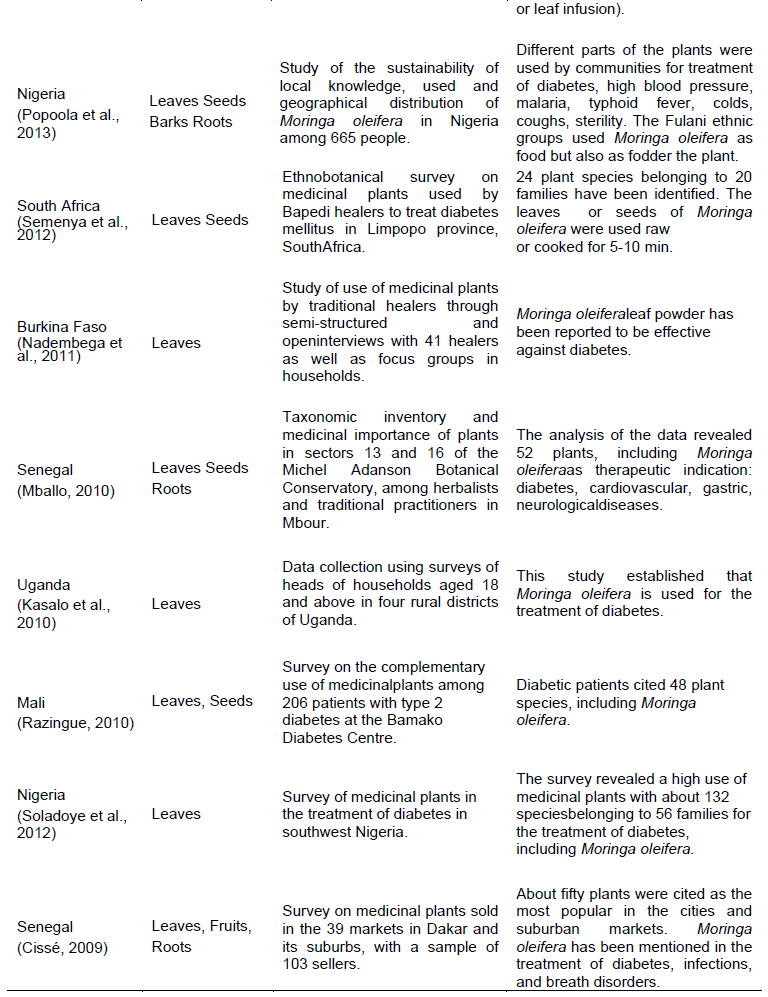 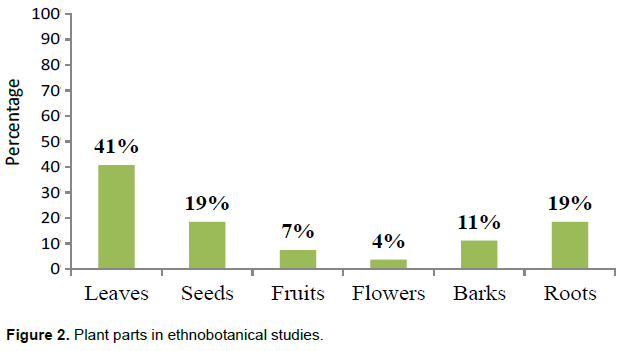 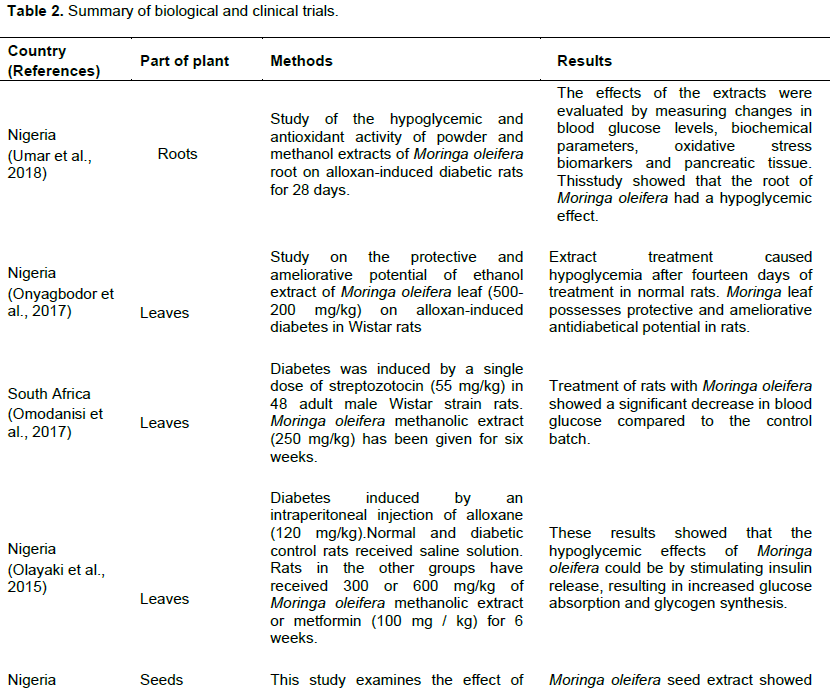 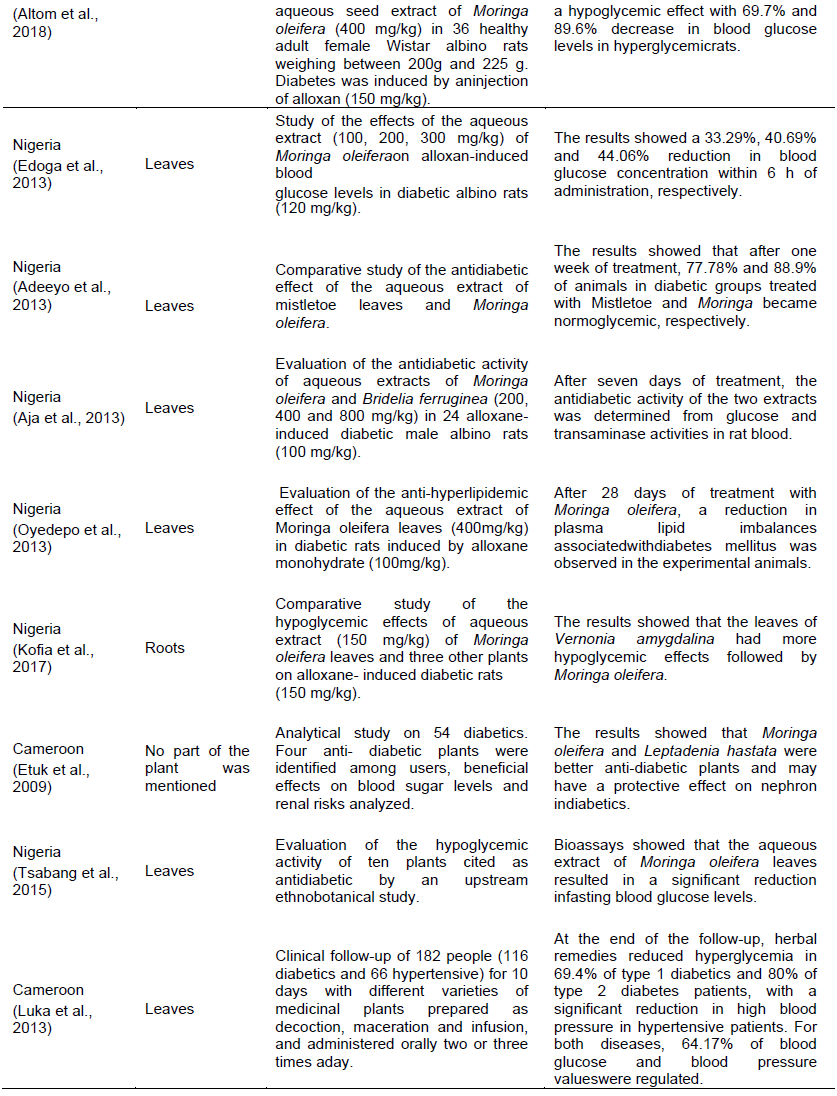 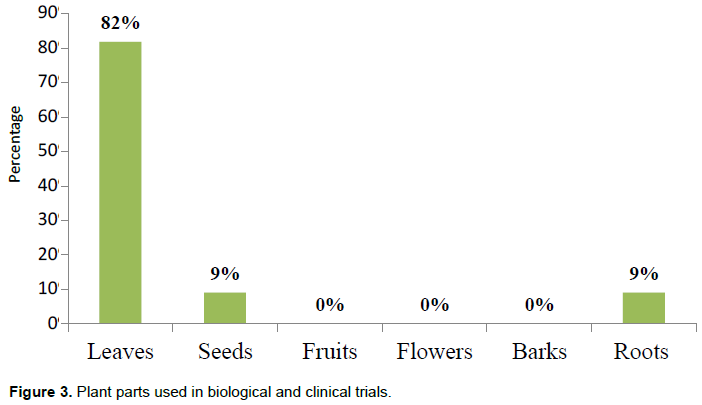 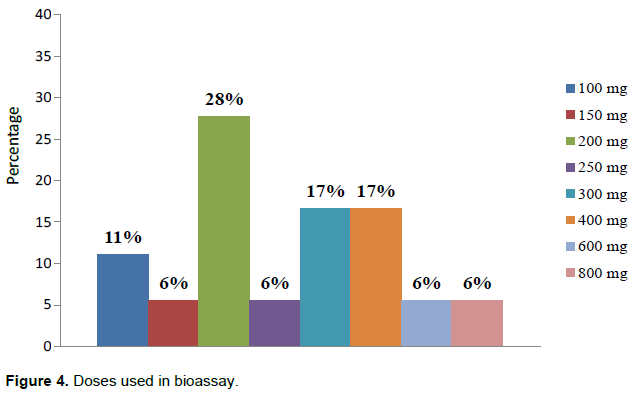 Therapeutic virtues of the organs of M. oleifera

The juice of the leaves was considered as detergent and antiscorbutic;they relieve children of convulsions, headaches and treated conjunctivitis (West African Health Organisation (WAHO), 2013). Fresh leaves crushed and placed, in poultice, on abscesses could cause them to mature and promote the expulsion of foreign bodies. The poultice application of heated leaves has been indicated for the treatment of syphilitic ulcers (Fortin et al., 2009). Leaf decoction has been used in the treatment of high blood pressure and erectile dysfunction (Diop, 2014), and also as antipyretic (Sèye, 2014).

The decoction of flowers had therapeutic effects to fight against infertility and sexual dysfunction in men and women (Fortin et al., 2009).Fruits were used in the treatment of inflammation disorders, asthma, rhinitis (Gueye, 2011).The seed powder was used against hypertension (Diop, 2014). The seeds were also used in the treatment of splenomegaly; wound healing. They also help to treat hyperthyroidism, rheumatism. Processed M. oleifera seed meal could be used to treat malnutrition problems (West African Health Organisation (WAHO), 2013). The  bark of Moringa contains two alkaloids, called Moringin and Moringinin (Kerharo, 1969). It is used for the treatment of heart problems, yellow fever, and toothache. Massages, based on crushed roots, have a beneficial effect on rheumatism and joint pain. The roots, in powder form by the nasal route, can be used for fever, headaches and neuralgia (Gueye, 2011).

The anti-diabetic activity of Moringa oleifera has been reported in several studies in sub-Saharan Africa and in other parts of the world. Leaves of M.oleifera are suitable source of green leafy vegetables to reduce diabetic complications in diabetic patients (Giridhari et al., 2011). Aqueous extract inhibits the activity of α amylase and α glucosidase; it improves antioxidant capacity, glucose tolerance and rate of glucose uptake in yeast cell. The aqueous extract can be used as phytopharmaceuticals for the management of diabetes when used as adjuvant or alone (Khan et al, 2017).

The results of ethnobotanical studies have made it possible to make an inventory of the wealth of anti-diabetic medicinal plants in sub-Saharan Africa and the interest of these remedies by communities. In Senegal, the study done among the Fulani shepherds of WidouThiengoly, municipality of Téssékéré, Iferlo, Department of Nioro du Rip and Tivaouane, showed that the populations and traditional practitioners use greatly Moringa oleifera for treating diabetes mellitus (Delattre et al., 2001; Guèye, 2016;Diop, 2014; Sèye, 2014).

In addition, other ethnobotanical studies carried out in Africa show the presence of medicinal plants in the daily management of diabetes mellitus at the community level, as is the case in Mali (Koné, 2017; Razingué, 2010) and Chad (Etuk and Mohammed, 2009) where the use of species varies according to ethnic groups. M.oleifera has been cited in all its surveys as a reference among other anti-diabetic medicinal plants due to its effectiveness. The results of ethnobotanical surveys on the use of medicinal plants as an alternative means of treating diabetes identified 112 plant species belonging to 51 families in Togo (Ayeni et al., 2016); 168 traditional herbal medicines in Tanzania (Lunyera et al., 2016); and a total of 24 plant species belonging to 20 families in South Africa (Semenya et al., 2012).

The methods of preparation in traditional medicine are in the form of decoction, maceration, infusion or supplementation of leaf or seed powder in food. In a study conducted in Tanzania, the prevalence of traditional medicine used among individuals with diabetes was 77.1% (Lunyera et al., 2016). The use of the plant was related to its accessibility (cost), its effectiveness in lowering blood sugar, reducing or eliminating classic signs of disease; but others also said the opposite. Access to medical care, particularly for chronic diseases, remains  a  major  issue  in rural areas,  where  medicinal plants play an important role in the community health system. However, the World Health Organisation (WHO) encouraged research on traditional medicine for the treatment of these chronic non- communicable diseases (Organisation Mondiale de la Santé, 2013). Most preparations of these remedies do not have specific dosages, which could be dangerous with cases of toxicity in some plants.

In bioassays, doses ranging from 100 to 800 mg were tested in animals. Extracts (aqueous, methanolic and ethyl acetate) of 200 mg/kg were most commonly used in the work (Figure 4).The inclusion criteria for animals in bioassays were dependent on blood glucose levels after diabetes     induction.       Streptozotocin    and     alloxane    at various doses have been used as experimental models to induce diabetes in laboratory animals in studies. They cause the insulin-producing cells of the pancreas to be destroyed by inducing necrosis. Most of the trials use metformin or tolbutamid as the reference drug.Studies have shown that aqueous extract of M. oleifera leaves had dose-dependent hypoglycemic activity in alloxan-induced diabetic rats and was almost as effective as standard drugs (tolbutamid, metformin).

Aqueous extract at doses of 100 and 200 mg/kg of M.oleifera leaves improved fasting glucose levels, with an increase in HDL cholesterol levels and a decrease in LDL cholesterol and triglycerides in diabetic rats induced by either Streptozotocin or alloxan. Methanolic  extract  from M. oleifera leaves at doses of 300 and 600 mg/kg has hypoglycemic effects in alloxan-induced diabetic rats, improved glucose tolerance, glycogen synthesis, and lipid metabolism (Olayaki et al., 2015).Treatment with aqueous extract of leaves (7 days) and seeds (28 days) of M.  oleifera at a dose of 400 mg/kg in alloxane-induced diabetic rats had hypoglycemic activity (Adeeyo et al., 2013; Oyedepo et al., 2013).

However, high levels of HDL and reduced LDL concentrations after administration of M. oleifera extracts may play a protective role against the development of atherosclerosis and cardiovascular complications of diabetes (Olayaki et  al.,  2015). The  richness  of  African flora in medicinal plants, as well as the adaptability of M. oleifera to the Sahelian climate and its daily use in food, should encourage decision-makers to support research on this so-called miracle plant. This can be done through funding and institutional support to conduct clinical trials in diabetics based on ethical standards.

Oxidative stress has been suspected to be the cause of chronic non-communicable diseases, particularly in diabetes mellitus. This leads to a reduction in insulin secretion by Langerhans cells and a decrease in the action of the hypoglycemic hormone worsening the state of insulin resistance in the profile of type 2 diabetes (Delattre et al., 2001). The phytochemical constituents of M. oleifera offer a protective action against oxidative stress, preventing or slowing down the oxidation of other molecules. Generally, this is done by trapping free radicals and reducing the development of inflammatory cytokines due to its high phenolic content (Omodanisi et al., 2017).

Hypoglycemic activity of M. oleifera may be probably due to the presence of antioxidants such as flavonoids, quercetin and kaempferol, polyphenols and vitamins, in different parts of the plant (Adeeyo et al., 2013). Quercetin significantly increases the hepatic activities of glucokinase like insulin. Leaves contain terpenoids, which appear to be involved in the stimulation of the β cells and the subsequent secretion of preformed insulin (Konmy et al., 2016). Other compounds found in Moringa oleifera leaves like isothiocyanates seem to reduce insulin resistance and hepatic gluconeogenesis.

M. oleifera is also used in the treatment of many diseases such as high blood pressure and obesity that can be attributed to the presence of β-sitosterol in the leaves.

The use of underground parts could pose a threat to species if there are no mechanisms for restoration and safeguarding of biodiversity by communities.


LIMITATIONS OF THE STUDY

We have collected little data on the anti-diabetic properties of M. oleifera in sub-Saharan Africa; this is explained by the non-publication of research works (theses and dissertations) in scientific journals and also on academic digital libraries (internet), and those that have not been indexed by the databases.

M. oleifera is a plant with many benefits for humans, nutritionally, medicinally and economically. Its promotion could help to combat the  double  burden  of  malnutrition, including under-nutrition and chronic non-communicable diseases such as diabetes mellitus, especially in low- and middle-income countries, which are also facing the effects of climate change. In view of all this information gathered on the anti-diabetic properties of M.oleifera, it would be necessary to conduct clinical trials in the Sahel countries, given its accessibility and easy adaptation to the climatic conditions of the region.