Road infrastructure is one of the core components to attain broad based and sustainable development. In the context of the geographical features of Ethiopia, settlement pattern and economic activity, road transport has   a   very  significant   importance   for    accelerating  socio-economic development. Access to improved road creates an enabling environment for the promotion of agricultural and non-agricultural activities and stimulates the growth of all sectors of the economy. Ethiopia heavily relies  on  road infrastructure  for public transport service
and its freight. Roads is the main transport modality in Ethiopia; it accounts for over 95% of passenger movement and motorized inter-urban freight (Ethiopian Road Authority, 2009). For the past two decades, the Ethiopian government massively engaged in the upgrading, rehabilitation, and widening of the road network across the country. Ethiopia’s road infrastructure expenditure is more than 3% of GDP in recent years.
Road network in the country quadrupled from 1997 to 2015, but the density of road is the lowest in Africa. About 60% of the Ethiopian rural populations are without access to all-weather roads (World Bank, 2016). Accessibility of rural roads is very low in Ethiopia; 10% of population in rural areas resided 2 km away from all-weather roads. This is only half of the benchmark level for Sub-Saharan Africa countries (Foster and Morella, 2011). Poor road transport is the major constraint of market access in the country. Long travel times and higher transportation costs arise because of poorly developed road infrastructure. This adversely affects economic activities and market access to rural households. Better access to road transport reduces travel time, it also reduces trade, and transportation costs. This facilitates access to market and rural non-agricultural employment, which have economy-wide effects. Furthermore, an improved access to road infrastructure potentially accelerates poverty reduction in the country. Trade and transport margins can be reduced through public investments on road infrastructure. The objective of this paper is to investigate and discuss the economy-wide effect of improving road transport infrastructure.

AN OVERVIEW OF ROAD INFRASTRUCTURE IN ETHIOPIA

Road sector development strategies of Ethiopia
Public investment in road infrastructure is acknowledged as one of the pillars of rural development strategies of Ethiopia for the past two decades. Specifically, by recognizing the socio-economic significance of road transport, the government launched a Road Sector Development Program (RSDP) in 1997. The main objectives of  RSDP were  rehabilitation,  upgrading  and expanding road network by construction of new road across the country. RSDP was implemented in four separate phases: RSDP I (run from July 1997 to June 2002), RSDP II (run from July 2002 to June 2007), RSDP III (run from July 2007 to June 2010) and RSDP IV run from July 2010 to June 2015 (Ethiopian Roads Authority, 2014).The major achievements of RSDP from 1997 to 2014 include the total network of road increased from 26,550 to 99,522 km and the share of roads in good condition increased from 22 to 70%. Furthermore, road density per 1000 square km increased from 24 to 90.5 km and road density per 1000 population increased from 0.46 to 1.1 km (Table 1).
Trends of road network in Ethiopia
The aggregate road network stock in Ethiopia was 6400 km in 1951 and the size of the road network reached to 9160 km in 1973 with the annual growth rate of 2.05%. In the derg regime (1974-1991), the total stock of road network reached 19017 km with 6.2% annual rate of growth (Ethiopian Roads Authority, 2009; Worku, 2011). Since the inception of RSDP, rehabilitation and construction of new road network has been widening across the country. Road network size of the country from 1997 to 2014 is described in Table 2. The total road network in Ethiopia increased from 26,550 km in 1997 to 99,522 km in 2014 and the sizes of road network annually grow on average by 8.4 km. The rates of growth of road networks are bigger in the current regime relative to the past regime of Ethiopia.
Road density in Ethiopia
Road density defined as the ratio of the length of the aggregate road transport network in the country to the total area of land in the same country. In other words, road density can be defined as road length per 1000 square km of land area or length of road per 1000 person. Density of road is a rough indicator for measuring road accessibility (World Bank, 2008). In Ethiopia, road density per 1000 person increased from 0.46 km in 1997 to  1.1 km in 2014. On the other hand, density of road per 1000 square km increased from 24.14 km in 1997 to 90.5 km in 2014 (Table 3). 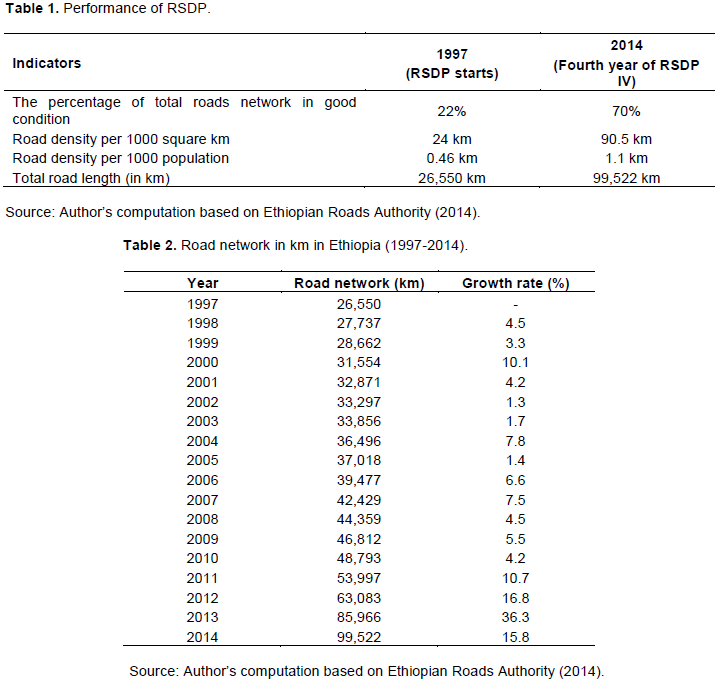 Financing of road development
Large amounts of capital are invested for the development of road transport network throughout the country. Table 4 shows annual expenditure for road construction in Ethiopia from 1998 to 2014. During this period, a total of 180.7 million birr was invested for road development in the country. The main source of funding to finance road investment was obtained from domestic source (78.8%) and the remaining 21.2% collected from international sources. The external source of finance for road development mainly acquired from World Bank, European Union, China, African Development Bank and Japan (Ethiopian Roads Authority, 2014).
Data
The source of data for this study is the 2005/06 updated social accounting matrix (SAM) of Ethiopia (Mosa, 2018). The 2005/06 SAM of Ethiopia was built by Ethiopian Development Research Institute in collaboration with the University of Sussex (Tebekew et al., 2009). However, the 2005/06 SAM of Ethiopia is updated by Mosa (2018); specifically, the household, factor, activity, and commodity  accounts  in  the  SAM  are  updated.  A SAM represents the circular flow of the economy that captures transactions and transfers between all economic agents in the system for a particular period, usually for a year. Every transaction in the SAM is shown in a cell. Each cell in the SAM describes the flow of funds from the column to the row account. The receipts (income) are recorded in the row whereas the payments (expenditures) are recorded in the column (Pyatt and Round, 1985; Round, 2003). SAMs are generally built by incorporating the following account groups: activities, commodities, factors, institutions (household, enterprise, and government), savings and investment, and the rest of the world.
The updated SAM used for this study comprises of 199 activities and 194 commodities, 34 household groups, 31 factors of production (10 labor categories and 21 other factors), 17 tax accounts, trade and transport margins, savings and investment, stock changes, enterprises, government and rest of the world. Therefore, the updated SAM comprises of 481 row and column accounts. The detail documentation of the updated SAM can be referred to in Mosa (2018).
Relevant activities and commodities accounts are included in the SAM for making the SAM suitable for addressing the objectives of this study. Specifically, in the updated SAM, separate activity accounts such as trade, transport, communication, and storage are created. Similarly, separate commodity accounts such as trade, transport service and communication included in the updated SAM. Furthermore, trade and transport margin is treated  as  separate  account  in  the  updated SAM. The balanced macro SAM of Ethiopia is depicted in Table 5.
For example, the margin in the SAM  is  23.09  billion  birr that is cost of trade and transport margin for supplying marketed commodities. The total commodity supply in the  market is 315.5 billion worth of birr, out of this 235.3 billion birr (81.9%) sourced from domestic supply of commodities, 47 billion birr (14.9%) derived from commodities imported from the rest of world, and the rest 10.1 billion birr (3.2%) is a tax payment (Table 5).

Ethiopia is heavily dependent on road infrastructure for transportation services. However, access to rural roads is still very low in Ethiopia. Poor road transport is a major constraint of market access and non-agricultural activities in the country. The aim of this paper is to investigate the economy-wide effect of improving road transport infrastructures. Better access to road infrastructure potentially reduces per unit trade and transport margins and increases efficiency of transporting commodities into the market. Three policy scenarios are conducted in this paper. Based on the growth rate of road network density during the GTP period, trade and transport margins are reduced by 1.8 to 2.1% in the first scenario. The TFP of activities that produce trade and transport services is increased by 1.1% in the second scenario. Scenario one and two are combined to form the third scenario with the expectation it might produce a larger effect. The cost of financing road infrastructure is sourced from government savings (government raises funds through income tax replacement) and foreign savings (international aids/loans).
The policy simulations indicate that lower margins and increasing TFP result in a reduction of PQD for marketed commodities across all scenarios. Household consumption and domestic production of agricultural and non-agricultural sectors are positively affected by the policy simulation. Furthermore, the simulation scenarios also indicate that expansion of road infrastructure results in welfare improvement among rural and urban households. The policy simulation also affects real macroeconomic   indicators   including GDP, investment consumption, private consumption, absorption, total domestic production, and import demand. All the policy scenarios depict the expected outcome. There is no huge difference between scenario one and two for most simulation results. As expected, the third policy scenario produced a larger effect relative to the separate effects of scenario one and two. As scenario one is carried out based on empirical literature, it seems to be the most realistic policy simulation.
Even though the simulation results are sensitive to the change in the income elasticity of demand for marketed commodities, the direction of changes is unaltered in all scenarios. Improved access to road transport is tremendously important for the promotion of both agricultural and non-agricultural activities. Therefore, improvement of road transport infrastructure should be considered as one of the policy pillars in the design of development policy and strategies of Ethiopia.