Ecological effects of oil spill on pelagic and bottom dwelling organisms in the riverine areas of Odidi and Egwa in Warri, Delta State

The ecological effects of oil spill on environmental media and organisms (pelagic, bottom dwelling organism) in the riverine areas of Odidi and Egwa in the Niger Delta ecological zone of Delta State was investigated approximately six months after the spill. The content of petroleum hydrocarbons and heavy metals (lead, copper, zinc, iron and chromium) in the water, sediment, fish (Clarias gariepinus) and snail (Pachymelania byronensis) was evaluated to determine the effect oil spill had on the environmental matrix and the organisms. The mean concentration of total petroleum hydrocarbon (TPH) in the sample matrix (water, sediment) and organisms (fish and snail) from Odidi and Egwa Rivers was above the Department of Petroleum Resources (DPR) limits of 50 mg/L and 5000 mg/kg. The control level of TPH in the media and organisms was less than 5 mg/kg. The mean water concentrations of iron and chromium were above their respective DPR limits of 1.00 and 0.03 mg/L. The concentrations recorded for iron in Odidi and Egwa waters was 2.96 ± 0.01 mg/L and 2.95 ± 0.08 mg/L while chromium was 0.33 ± 0.01 mg/L and 0.34 ± 0.01 mg/L respectively. Similarly, the mean concentrations of heavy metals in the water, sediment, cat fish (Clarias gariepinus) and snail (Pahymelania byronensis) were all significantly different from the control station (P<0.05). In other to prevent the adverse effects on environmental components and organisms resulting from oil spill, immediate clean-up of the environment and remediation measures should be carried out to prevent the bioaccumulative effects that could result from long term exposure to crude oil spill / pollution. This is with the view of safe guarding environmental media, aquatic fauna and subsequently man, who constantly feed on these organisms.

Study area
The study areas, Odidi and Egwa Rivers in Warri South-West Local Government Area of Delta State in the Niger Delta ecological zone of Nigeria lies within longitude 5°26’18”N; latitude 5°27’37”E and longitude 5°31’38N”; latitude 5°26’25”E respectively (Figures 1 and 2). The activities of the inhabitants of these areas consist mainly of fishing. There are a number of Exploration and Production facilities and activities located around these areas belonging to some major oil producing companies in the upstream sector of the oil industries, some of which includes oilfields, gas plants, flow stations. The rivers Odidi and Egwa and adjacent streams in the region have been constantly receiving different environmental pollutants or impact from Oil Exploration and Production activities over the years since crude oil was discovered in the regions. The control location for this study was collected from Agbarho River, which is presumably a semi-pristine environment. The major anthropogenic activities at Agbarho River include recreational (swimming), fishing and occasional sand mining. 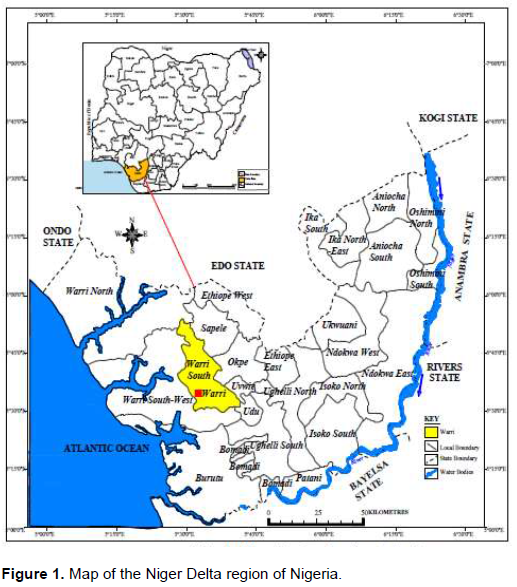 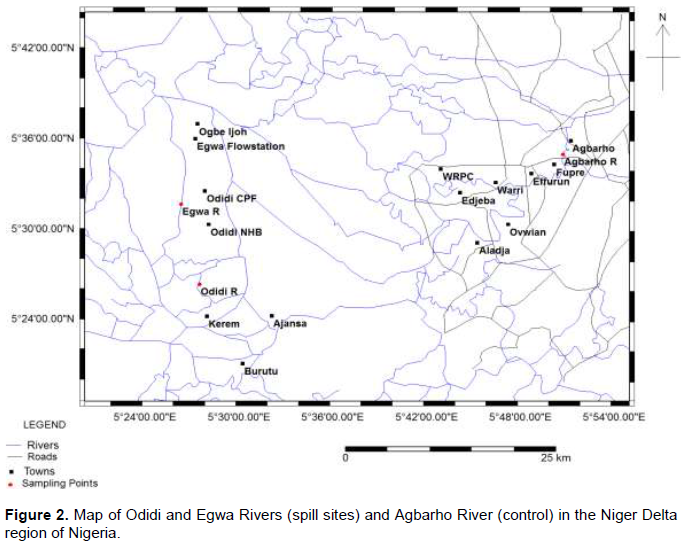 The results of TPH and heavy metals in the water, sediment, pelagic organism (cat fish – C. gariepinus) and bottom dwelling organism (snail – P.a byronensis) from the spill locations in Odidi and Egwa Rivers are presented in Tables 1 - 5 with further illustration in Figures 3 - 4. 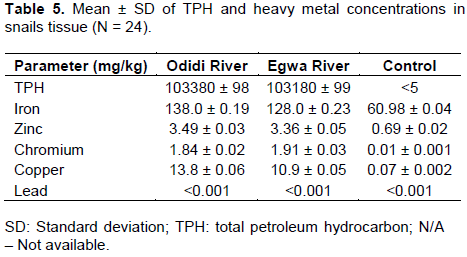 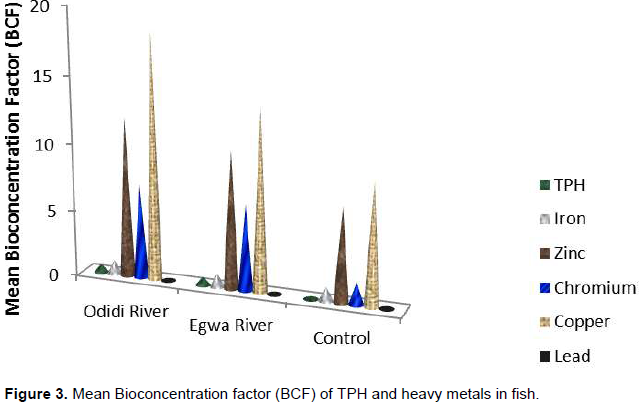 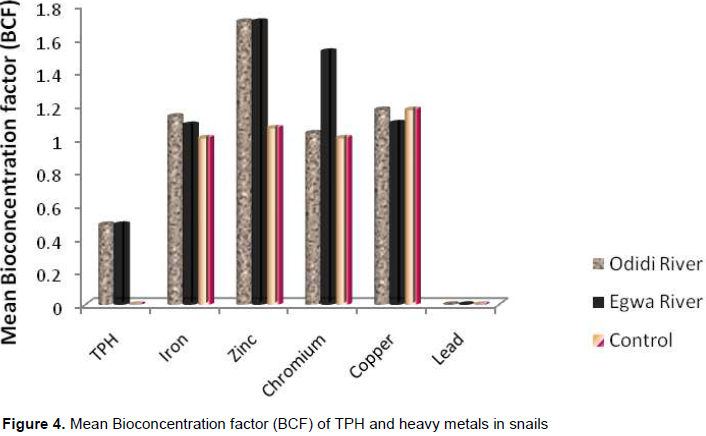 Water characteristics
The  concentration  of  TPH  reported for Odidi and Egwa Rivers were 97592 ± 46 mg/L and 91590 ± 51 mg/L respectively, which were far above the DPR regulatory limit of 10 mg/L (DPR, 2011). This was evident as observed on the water samples that had scum of crude oil in it. The mean concentrations of iron and chromium were above their respective DPR limits of 1.00 and 0.03 mg/L. They were also found to be higher than their respective control values (Table 1). The physico-chemical composition of the water from the affected rivers indicated that the waters were slightly acidic, turbid and brackish (Table 2).
Sediment
Total petroleum hydrocarbon (TPH) in the sediment  from
Odidi (215730 ± 81 mg/kg) and Egwa (215700 ± 77 mg/kg) exceeded the DPR permissible range of 50 to 5000 mg/kg. Since sediment is known to act as sink for most hydrocarbons, most of the crude oil would have settled to the bottom bed over time, hence the high concentrations are reported. However, the concentrations of heavy metals were within the various DPR target and intervention values (Table 3).
Pelagic organisms - catfish (Clarias gariepinus)
The mean concentration of heavy metals in the fish muscle from the spilled site varied. In comparison with the FAO/WHO permissible limits, all the metals except chromium complied with the set standard (Table  4).
Theconcentrations of petroleum hydrocarbon was very high in both spill stations Odidi (58334 ± 32 mg/kg) and Egwa (58314 ± 35 mg/kg). Some dead fish and other pelagic organisms were seen floating on the water with scum of crude on their body surfaces after the spill. The TPH from the control location does not indicate any hydrocarbon pollution since values obtained was less than 5mg/kg while the heavy metals concentration were relatively low.
Bottom dwelling organism - snail (Pachymelania byronensis)
The level of TPH in the snail was 103180 ± 99 mg/kg and 103380 ± 98 mg/kg for Egwa and Odidi Rivers, respectively. The high concentration  of  the  hydrocarbon residue in the tissue of the organisms could possibly be as a result of the oil spill. The concentrations of heavy metals (iron, zinc, chromium, and copper) were found to be above their respect control values (Table 5).
Bioconcentration of TPH and heavy metals in species
The results for bioconcentration were relatively low in the species from the spilled locations. The values are presented in Figures 3 and 4 for fish and snails respectively. The bioconcentration factor (BCF) for TPH in fish varied between 0.60 and 0.64 in Odidi and Egwa Rivers while the control was 0.0 since there was relatively less than 5 mg/kg of hydrocarbon in control site.For copper, the BCF was 18.5 in Odidi and 13.5 in Egwa, while the control was 9.0. Zinc biocentrated is a factor of 12.0 in the fish muscle in Odidi and 10.26 in Egwa and the control was 7.0 (Figure 3).
In the snail, the BCF for TPH was 0.48 from the two spill sites while a factor of 0.0 was recorded in the control. A factor of 1.7 was reported for zinc in Odidi and Egwa while a BCF of 1.06 was obtained in the control location (Figure 4).

The high concentrations of total  hydrocarbon  and  heavy metals in the sample matrix (water, sediment) and organisms (fish and snail) from the spill environment could be attributed to the oil spill that occurred in the sampling locations since concentrations were significantly higher than the control from Agbarho River. The concentration of heavy metals and petroleum residues in aquatic organisms may become higher over time, which may lead to lethal and sublethal consequences in aquatic fauna and clinical poisoning to man and the environment. Thus, a site that had been damaged or destroyed by an oil spill calls for immediate response and restorative/ remediation measures since natural attenuation cannot clean up very high concentration of petroleum residues as revealed from this research.