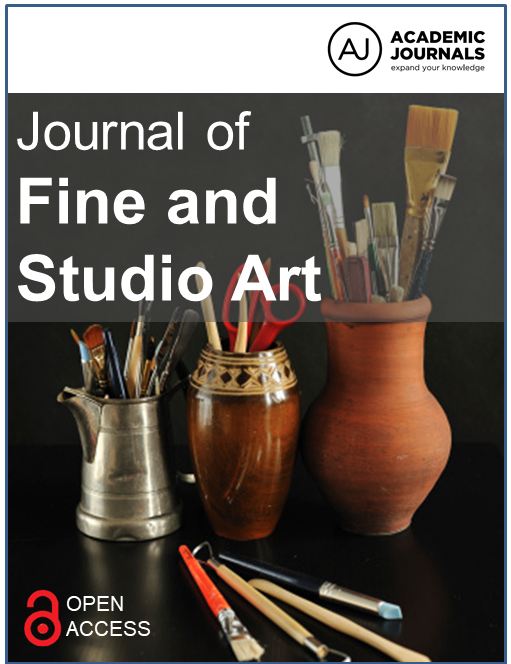 The purpose of the study was to assess quality of pottery products produced in Kenyan prisons. The quality of products produced in Kenyan prisons shows lack of standardization. Descriptive research design guided the study. The study areas were Lang’ata and Kisii women prisons with a population of 480 respondents. Purposive sampling technique was used to sample 30 inmates who engage in pottery, thus leaving a total of 450 non-potter inmates who were sampled by use of Krejcie and Morgan’s table. The findings revealed that although pottery products are appreciated by the inmates, majority of inmates do not take part in pottery. The number of elderly inmate potters was low compared to other groups yet the elderly were the ones who passed the skills to the younger generation in the larger society. It was therefore concluded that quality of pottery in prisons exhibited low standard craftsmanship with poor rendition of skills. The study recommended that authorities concerned with prison should work towards promoting the sector by eradicating the negative attitude of the inmates by improving pottery facilities in prisons and incorporate variety of methods and media in order to improve on the products’ aesthetic character. Improvement on facilities may encourage more inmates into pottery, thus assist a large number of inmates to cope with prison environment and reintegration.
Key words: Inmates, pottery, prison, products, quality, women.

This study adopted descriptive research design; the target population comprised 480 respondents. The researcher purposively selected Lang’ata and Kisii prisons since these facilities engage in pottery production. Purposive sampling was used to select 4 illustrators and 30 inmate potters while Krecie and Morgan’s table (1970) was used to select 205 inmates who do not take part in pottery. Proportionate sampling technique was then used to determine the sample size for each prison. In Lang’ata prison, out of 270 inmates, a sample of 123 inmates was selected. In Kisii prison, out of 180, a sample size of 82 inmates was selected. Simple random sampling was used to select a total of 205 inmates from the two prisons who do not practice pottery making.
The second phase involved conducting interviews and carrying out the questionnaire with 239 respondents. That is 4 illustrators, 30 inmate potters and 205 non-potter inmates. The desired data was collected by use of questionnaires, interviews and observation guides. The questionnaires which were both in Kiswahili and English language, were used to collect data from inmate potters who were the key respondents and non-inmate potters. The rationale for using questionnaires was the large number of this category of respondents and the sensitive nature of the research. The questionnaire provided anonymity to the inmates and therefore the freedom to express their opinion freely and make suggestions. The potter inmates provided their experiences on pottery while the non-potter inmates provided information regarding their perceptions towards pottery in prison. Observation method was used to supplement the information gathered from the respondents through questionnaires. To improve on the reliability of the research instruments, a pilot study was conducted in Kakamega prison which had similar characteristics with the study prisons. This prison was not included in the study.
Data on the completed research instruments were cleaned, coded and entered into the computer for analysis using statistical package for social sciences (SPSS) version 20. Data was analyzed by use of descriptive statistics including means and standard deviations. Quantitative and qualitative methods of analysis were employed in the study. The use of both methods ensures that the limitations of one type of data are balanced by the strength of another. Both qualitative and quantitative data were analyzed separately but merged during data interpretation. Data presentation was done in form of tables, figures and frequency distribution.

Quality of pottery
Demographic characteristics of respondents
In order to better understand  the  respondents  and  their suitability, the researcher sought to establish their various demographic and background characteristics. Information on age, education level and duration in prison was therefore captured during the study. This was analyzed and presented in terms of frequencies and percentages as presented in Table 1. 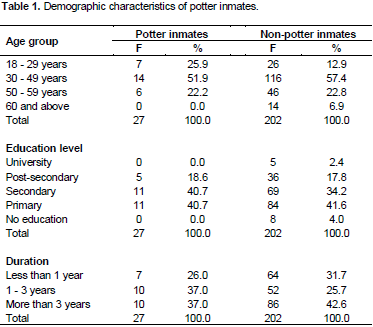 The findings of the study confirms the observations made that prompted this study, that pottery products produced in Kenyan prisons lack standardization. Quality of pottery in prisons exhibited low standard craftsmanship with poor rendition of skills. The items were not diversified in terms of form, design and decoration. Inmates’ mastery of quality of products is significant to stability and sustainability of pottery in prison so that it is not wiped out over time. The training should empower inmates with adequate skills which they could apply with ease, this would assist them re-enter society with relevant skills as contributors towards economic stability in society because of the skills acquired. There was handful of inmates taking up pottery, a good number could gain in the program if skills were adequately delivered. The low level of quality products from Kenyan prisons calls for innovative ways and re-invention of pottery for quality products so that the relevant skills acquired can assist inmates to reintegrate, so this paper anticipates a greater involvement of the inmates in pottery production and practice suited for reentry and reintegration to society. This calls for more experimentation, exploration in terms of visual imagery for self-expression and refinement of the craft in prisons. Quality in pottery is enhanced when professional processes are in place; this builds confidence among inmates and assist  them  to  adjust  to prison environment.

Based on the findings of the study, the following recommendations are made.
There is the need to develop the traditional pottery products to meet the expectations of modern market, by incorporating modern technology of production with indigenous technology and use of mixed media practice. Inmates could use experimentation with other materials as hobbies.
Lastly, the study recommends enhanced training of inmates on the use of pottery as a vehicle for self-expression by use of imagery, symbols and inspirations in order to captivate the interest and attention of the consumers.