Journal of
Geology and Mining Research

Coarse-grained rutile from regolith in Ebensuk west of Tinto, Cameroon

Coarse rutile with some grains exceeding 32 mm was recovered from regolith excavated from three pits (ABC) at Ebensuk. The rutile concentration ranges from 2.53 kg/m3 of regolith material in Pit C to 2.83 kg/m3 in Pit B with an average of 2.66 kg/m3. The rutile is black, longitudinally striated, with a metallic to adamantine luster and hard. Results of grain size (Z) analysis show that the rutile crystals range in size from 4mm to Z≥32 mm. The grains are predominantly concentrated in the 16≤Z<32 mm size grade with a wt% of 48.3 followed by Z≥32 mm and 8≤Z<16 mm size grade with 23.1 wt% and 22.8 wt% respectively.  Results of geochemical analysis by XRF technique reveal that the rutile in the area is of high quality, with a TiO2 content > 96 wt%, and subordinate Fe2O (2.2-3.1 wt%), and minor amounts of Al2O3, SO3, K2O P2O5 and Mn2O3  for all the samples analyzed, and meets international specifications for economic rutile ores. The rutile must have been derived through weathering of the underlying gneisses and their coarse nature is probably indicative of a possible source from granite pegmatite veins occurring in the gneisses outcropping in the study area.

Rutile has been known to occur in Cameroon since 1908 and was very actively exploited from 1935 to 1957 in the area around Yaounde. All deposits in this area are alluvial and mining has been artisanal (COLONNA-CIMERA, 1949a, b; Callot, 1950; Chataignon, 1951; Champetier de Ribes, 1956; Champetier de Ribes and Robert, 1956; Laplaine, 1969). Cameroon ranked third after Australia and the United States of  America  in  rutile production from 1935 up to 1957 when mining activity in the sector was abandoned. With the recent renewed interest in the mining sector in the country, there is active exploration and research in the area around Yaounde with the goal of discovering new deposits that could warrant mechanical mining. Some of this research has been reported by Stendal et al.., (2006), Ngalla (2009), Sumbele (2011) and Ngalla et al. (2012).

Besides the Yaounde area, some trade in rutile was reported in Tali close to Mamfe during the Second World War with a chamber of commerce in Europe by Dumort (1968). This area that has been little investigated is the subject of this paper. The objectives of this work are to; identify rutile deposits in the area and to carry out petrographic, granulometric and geochemical characterization of the rutile in order to evaluate its quality according to international specification for commercial rutile. Rutile as a high quality titanium mineral is used in three areas including; ­i) in the manufacture of titanium metal ii) manufacture of TiO2 white pigments and iii) sheathing of welding electrodes for the stabilization of the electric arc, for the reduction of the melting viscosity and for the reduction of surface tension of the metal drops on the electrodes (Elsnar, 2010).

The study is located to the South east of  Mamfe  in  the South West Region of Cameroon between latitude 5° 31′ 24″ N and longitude 9° 48′ 24″ E. (Figure 1). Ebensuk is found in Upper Bayang Sub-Division 48 km west of Tinto, the Sub-Divisional headquarters. The area (Figure 1) is underlain by plagioclase gneisses, biotite gneisses and banded gneisses of the Precambrian Basement of South western Cameroon (Dumort, 1968). The gneisses have been penetrated in several areas by granite pegmatites with very coarse grains of quartz and feldspar. The plagioclase gneisses are mesocratic rocks with white and dark portions. They have grano-lepidoblastic textures with equant grains. The minerals present include; quartz, plagioclase, oligoclase (basic) or andesine biotite, garnet, graphite, apatite, rutile and zircon with minor muscovite, kyanite, sillimanite and tourmaline (Dumort, 1968). 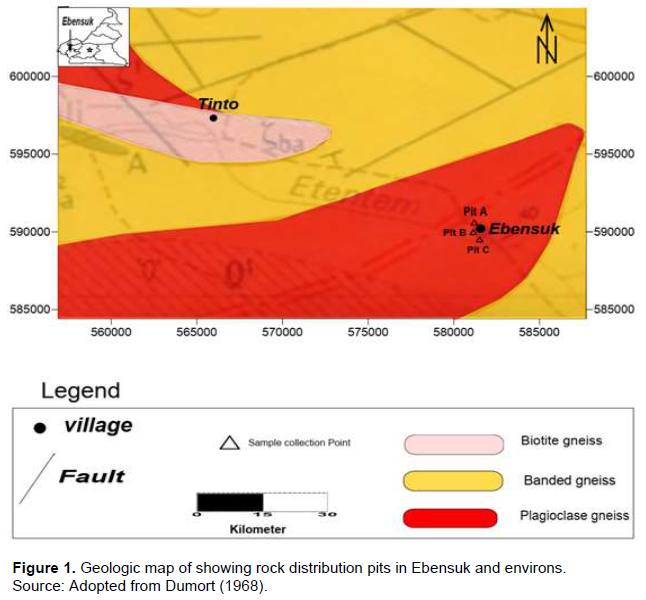 In outcrop the biotite gneisses appear foliated but look granitic in hand specimen. They are leuco-mesocratic and textures range from granoblastic to grano-lepidoblastic. Common minerals include; plagioclase - basic oligoclase, biotite, hornblende, epidote, apasite, sphene. The banded are common in the area and are characterized by mesocratic     and      leuco-mesocratic      bands       (white quartzo-feldopathic and dark mica and hornblende bands). They are grano-blastic to grano-lepidoblastic. Common minerals include; plagioclase, quartz, biotite and hornblende.

Field methods involve the panning of stream sediments to recover heavy minerals. The rock types in the area were also observed and samples were collected. Leads from local inhabitants were also important in the search which also involved the search for weathered regolith material. Three pits  A, B and C, each measuring 1m3 were excavated at a site with regolith rich in rutile; the excavated material was washed in nearby river and rutile grains were recovered by hand picking. The rutile recovered was then dried and weighed using a mechanical balance. Rutile samples recovered from the area were described in hand specimen and granulometric analysis was achieved by measuring the intermediate diameter of each grain to represent grain size (Z) using a ruler.

Geochemical analysis was done using x-ray fluorescence (XRF) method (Bull et al., 2017). The rutile samples were crushed to powder and two grammes of powdered sample were put in a tarred, pre-ignated crucible (W0) and put in furnace at >1000°C for 15 min. The sample was then removed from the oven, cooled in a controlled atmosphere and re weighed (W1). Loss on ignition (LOI) was calculated on 1 g of sample. LOI = (W0+W1)/2*100. LOI represents the sum of H2O + CO2 + other volatiles. 8 g of di-lithium tetraborate was added to 1 g of calcined sample (after LOI) and mixed properly for homogenization. The sample was then put in a pre-ignited crucible and 100ml of lithium bromide was added and heated in furnace at 1150°C for 10 min. The melt was removed and poured in mould for glass beat production. The glass beat was then analyzed in the XRF machine.

The rocks observed in the study area are gneisses with abundant pegmatite veins with very coarse grained quartz and feldspar (Figure 2a). Some rutile was associated with gneissic clasts from these rocks on the field (Figure 2b). The stream sediments in the study area are barren in rutile ruling out the possibility of any alluvial deposits. The search however led to site with insitu regolith material covering an area of 2000 m2. The regolith material consists of a mixture ferrulitic red soil and coarse angular grains of quartz, feldspar, gneissic fragments and rutile. A total of 8 kg of rutile were recovered from the regolith material; 2.64 kg from Pit A, 2.83 kg from Pit B and 2.53 kg from Pit C.

Rutile of varying grain sizes was recovered from the excavated regolith material (Figure 3a to d). The crystals are hard, equant to elongated, prismatic, black in colour with a greenish black streak, and with an adamantine to metallic luster. The crystals show distinct striations parallel to the c-axis but their external morphology is not well developed. They are very angular indicating that they have not been transported and fracturing is common. 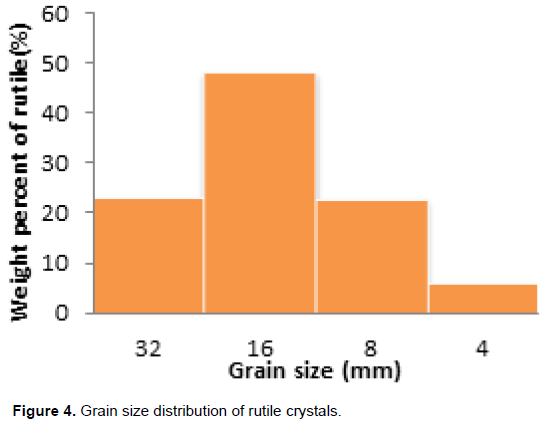 The ore grade of rutile in the area ranges from 2.53 kg/m3 in Pit C to 2.83 kg/m3 with an average of 2.66 kg/m3. This is quite high compared to an average of 0.027 kg/m3 obtained by Tabi (2015) from pits at another site in the area. The rutile recovered from the regolith at Ebensuk is much coarser  than  alluvial  rutile reported from other parts of the country by Stendal et al. (2006), Ngalla (2009), Sumbele (2011) and Ngalla. (2012). The black colour of the rutile and the greenish black streak is indicative of a high content of Niobium (Nb) and Tantalum (Ta) (Mineral Data Publishing, 2005). The colour diversity of rutile is thought to be attributable to different quantities of trace elements built into the crystal lattice. Nb, Ta, V, Cr and Fe can be built into the crystal lattice particularly well (Elsner, 2010). According to Martin (1985), the colouring of rutiles is in direct relation to the ratio of the components  FeO-Cr2O3-Nb2O5.  Alluvial  rutile   from   the south central portion of Cameroon is gray to reddish brown, according to Ngalla et al. (2012) and Sumbele (2012). The association of rutile with gneissic clasts in the area is an indication of host geneisses most probably the plagioclase gneisses of Dumort (1968). Dumort (1968) reported the association of rutile with garnet and kyanite in the plagioclase gneisses in the study area.  Ngalla et al. (2012) also reported the association of rutile with kyanite and garnet derived from gneisses to the south of Yaounde.

Rutile is a relatively common mineral in metamorphic assemblages, but mainly under P-T conditions of the granulite facies (Winkler, 1967), and seldom in such large crystals as observed in the study area (4 mm - ≥32mm). One possible way of forming rutile is by oxidation and breakdown of illmenite: 4FeTiO3+O2→4TiO2+2Fe2O3 (Buddington and Lindsley, 1964). Disseminated Ti-Fe oxides present in basic gneisses of the basement (like those outcropping in the study area) are believed to be the source of the coarse rutile (Papezik and Wit, 1973). The formation of large crystals of rutile would thus require effective separation of Ti and Fe (Papezik and Wit, 1973). This idea is supported by Elsner (2010) who postulated that in porphyries, rutile is formed during hydrothermal alteration at the expense of pre-existing titanium minerals including biotite, hornblende, titanite, illmenite and titanium magnetite. The Ti released here is precipitated as rutile particularly at high carbon pressure. The pegmatite veins occurring in the gneisses in the study area could have been the site of the release and precipitation of coarse grained rutile.

The rutile in the study area is of very high quality (>96 wt% TiO2) and meets international specifications as a raw material which set minimum TiO2 content at 95wt%, (Ngalla et al., 2012). However other quality standard indicators (Table 3) show that Fe and P and S are a little in excess of the required amounts. Griffiths (1985) set quality standards of rutile for the welding of electrodes at ≥95wt% TiO2, ≤ 1wt% ZrO2, and ≤ 1wt% Fe2O3.

The  study  has  shown  from  the  results  of  grain size distribution that coarse rutile with grain sizes ranging from 4 mm to ≥32 mm occurs in the area. The host regolith must have been derived from the underlying plagioclase gneisses outcropping in the study area. The rutile concentration in the regolith material ranges from 2.53 to 2.83 kg/m3 with an average of 2.66 kg/m3. The rutile is of high quality (>96 wt% TiO2) and meets international standards for commercial rutile which set minimum TiO2 content at 95 wt%. These results are indicative of potential economic deposits and are interesting enough to warrant further investigation in order to determine the occurrence of other deposits in the area, and to estimate the reserves.