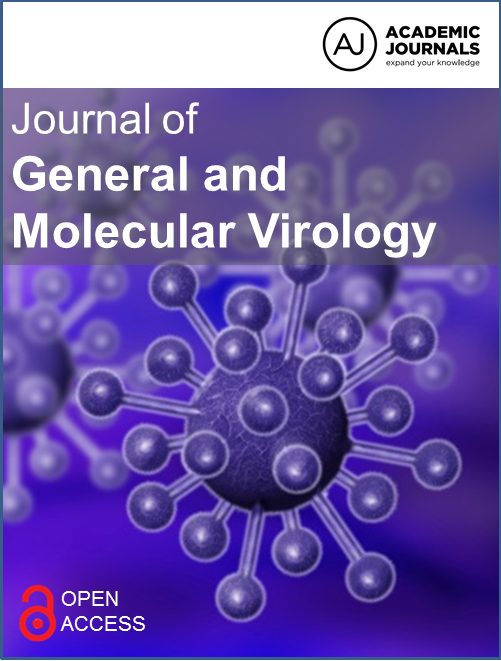 Maize lethal necrosis (MLN) disease is a major constraint on maize production in Eastern Africa since its first report in 2012 in Kenya. The main causative agent is maize chlorotic mottle virus (MCMV) which co-infects maize with other viruses from the family Potyviridae. In Africa, Sugarcane mosaic virus (SCMV) is the most common potyvirus that co-infects maize synergistically with MCMV. MCMV can be transmitted by insect vectors, mechanically and via contaminated seeds. Monitoring of MCMV is important in farmers’ fields, seed fields, seed-lots and in grain. Robust diagnostic tools are essential in epidemiological studies, germplasm screening and exchange of disease-free materials across the regions and globally. Therefore, a sensitive, reliable and affordable diagnostic tool for MCMV is necessary in the laboratory and also in the field. A reverse transcription loop-mediated isothermal amplification (RT-LAMP) assay with two-end point analysis was developed to detect MCMV in active vegetative stages and in seed. Six sets of specific primers were designed and evaluated. Amplification was detected in 60 min using the SYBR green colour change and in 10 to 20 min for real-time amplification in the Genie II platform. The assay discriminated the common viruses infecting maize in Eastern Africa. The assay showed excellent specificity to MCMV. The simplicity, rapidity, and inexpensiveness of this technique make it a suitable choice for large-scale sample processing, especially by laboratories with limited resources and for field analysis performed by regulatory agencies in the region. 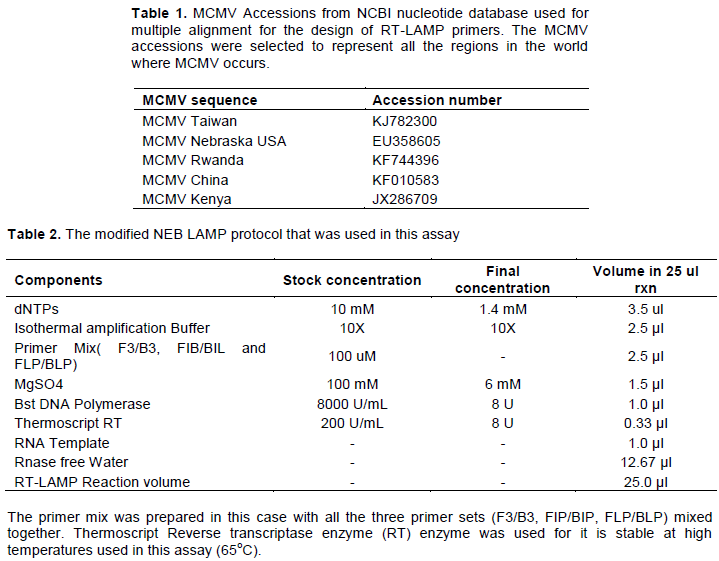 The 25 µl reaction tubes with LAMP reaction contents were incubated at 65°C for 1 h and the reaction terminated by inserting the tubes in water bath at 80°C. The DNA intercalating dye, SYBR Green (1 µl) was placed in the inner part of the cap before closing the tubes to enable colour change visualization thereby avoiding aerosol contamination by the amplified product.
Analysis of the RT-LAMP products was mainly by observing colour change of the reaction mixture from orange to green for positive samples (Soliman and El-Matbouli, 2006). This is due to intercalation with the amplified RT-LAMP products produced. The LAMP primer efficiency evaluation was replicated 4 times to determine their reproducibility.
One step RT-LAMP in Genie II LAMP machine
The Genie II LAMP Assay instrument (Unit 5 Blatchford Road Horsham West Sussex RH13 5QR UK) was used. It works under an isothermal amplification temperature and can be programmed for different temperatures. For the specific primer set, the optimum temperature was determined as 65°C with detection duration of pproximately 20 min. The subsequent melting process (in Genie II called annealing process) starts with 98°C and ends with a temperature of 80°C with a ramp rate of 0.05°C/s. The reaction mixture was the same as illustrated in Table 1 with 1 μl fluorochrome dye (FD) added but maintaining the 25 μl reaction volume by reducing RNA free water by 1 to 11.69 μl. Before adding Bst 2.0 DNA Polymerase, Transcriptor Reverse Transcriptase and RNA template, mixes were incubated at 95°C for 5 min to melt any primer multimers and cooled immediately on ice for 5 min.
Specificity analysis
The developed LAMP assay was evaluated for its specificity to MCMV amplification by carrying it out with other maize infecting viruses namely Maize dwarf mosaic virus (MDMV), Wheat streak mosaic virus (WSMV), Sugarcane mosaic virus (SCMV) and Panicum mosaic virus (PMV). Samples with a combination of MCMV and SCMV were also included in the specificity evaluation. This test was performed with both colourimetric end point and real-time analysis on the Genie II LAMP machine.
Sensitivity of detection analysis: RT-LAMP, conventional PCR and qRT-PCR assays
The sensitivity of detection among RT-LAMP, conventional RT-PCR and qRT-PCR was compared using 9-fold serial dilutions of the virus-positive total RNA extracts. The LAMP sensitivity test was evaluated in the Genie II  instrument while the conventional RT-PCR was carried out in the T100™ Thermal Cycler (Life Science Research, Bio-Rad) and the qRT-PCR in the 7500 Fast Real-time PCR System (Thermo Fisher Scientific, USA), respectively. The reaction volume for qRT-PCR was 25 μl which comprised 12.5 μl of the general master mix, 1 μl of the F and R primers each, 0.5 μl of the probe, 0.05 μl of the reverse transcriptase MMLV and 1 μl of the RNA template. The master mix contained Mg, dNPTs, BA and 8.95 μl of ddH2O. The cycling temperatures for MCMV amplification were 2 min at 50°C, 10 min at 90°C, 15 s at 95°C for 40 Cycles, 1 min at 60°C.
The same was performed for conventional RT-PCR and RT-LAMP with a 9-fold dilution. In all these assays, the original concentration used 10° was 25 ng/µl. These dilutions gave the following concentrations (ng): 25, 2.5, 0.25, 0.025, 0.0025, 0.00025, 0.000025, 0.0000025, and 0.00000025. The detection limits were determined by the lowest RNA concentration that provided a positive result.

Primer efficiency evaluations results
Table 3 shows the six primer sets that were designed for MCMV using the software Primer Explorer V4.
LAMP inner primers testing
Based on RT-PCR performed with samples from Kenya, the LAMP inner primers FIB(F) and BIP(R) were successful for amplification of all positive MCMV samples as shown in Figure 1. All the RT-PCR evaluation with the outer primers for the LAMP assay amplified MCMV material in the samples tested.
All the 6 sets of inner primers amplified MCMV positive samples through the conventional RT-PCR using the designed inner LAMP primers (FIB and BIP) (Figure 1). This indicates that the primers can amplify the target MCMV  genome sequence. However, the inner primers of the set 5 (5FIP and 5BIP) were used for conventional RT-PCR detection of MCMV as described earlier.
Amplification for MCMV and a combination of MCMV and SCMV by colour change (SYBR Green) assay and in Genie II was performed. Primer efficiency was analyzed by colour change intensity. All primer sets were able to promote amplification of MCMV, but at different efficiency levels. The colour changes were visually analyzed for that samples presenting clear variation of colour (Figure 2). The positive samples had colour changes from orange to green. The negative samples remained orange presenting no amplification of MCMV in those samples for the healthy control (HC) and water.
Specificity analysis
For the determination of specificity of the MCMV primer set, LAMP assay was carried out on samples with other viruses infecting maize namely Maize dwarf mosaic virus (MDMV), Wheat streak mosaic virus (WSMV), Sugarcane mosaic virus (SCMV) and Panicum mosaic virus (PMV).  Samples with a combination of MCMV and SCMV were also included in the specificity evaluation. The samples with   only   MCMV   or   with  a  combination  with  SCMV presented colour shift to green demonstrating the amplification of MCMV (Figure 3). This clearly shows that the primers were specific to MCMV.
Real time end point analysis using Genie II LAMP
Specificity analysis was repeated using the Genie II LAMP assay with real-time evaluation. The amplification was only evident with MCMV samples. Other common maize infecting viruses namely SCMV, MDMV, MSV, WSMV and PMV were not detected by the assay hence demonstrated the high level of specificity of the assay as illustrated in Figure 4. Only the MCMV and MCMV2 samples  were  amplified  showing  the  presence   of  the MCMV virus in these samples.
Only MCMV viruses’ samples showed the annealing activity which further describes the specificity of the LAMP primer sets shown in Figures 4 and 5. There was no primer annealing activity with samples without MCMV further demonstrating the specificity of the LAMP primer sets designed and synthesized.
MCMV RT-LAMP limit of detection (Sensitivity) results
The MCMV LAMP assay hereby developed demonstrated a high level of sensitivity with six-fold diluted samples being detected (Figure 6) and the amplification rates were only evident with the same sample dilutions (Figure 7).  This was equivalent to a concentration of 2.5 fg/µl. Samples within the range dilution of 25 ng/µl to 2.5 fg/µl were detected in this assay. The annealing activity occurred only with MCMV samples with concentrations between 25 and 2.5 pg/µl  (Figure  8). The same MCMV concentrations evaluated under the MCMV qRT-PCR also detected MCMV up to 6-fold detection as in the LAMP assay (Figure 9). However, the conventional RT-PCR was able to detect MCMV up to 4-fold dilution of 0.0025 ng/ µl.  This is shown in Figure 10 with amplification on the gel electrophoresis picture showing bands only in lane 4, 25 ng/µl to lane 8, 0.0025 ng/μl.

The author thank the US government through the USDA-FAS office in Nairobi for granting Francis Mwatuni a research fellowship under the Norman Borlaug fellowship to carry out this work in the department of Plant Pathology, OARDC-Wooster, Ohio State University. They also recognize the extremely valuable guidance by Dr. Margaret Peg Redinbaugh and Dr. Sally A. Miller during the entire research study at OARDC. Their uttermost gratitude also go to Christine Willey, Xing Ma, Fulya Baysal for their technical backstopping on the bench while in OARDC, Ohio State. They are indebted to Ivan Obare and Bramwel Wanjala for facilitating optimization of the Genie II LAMP assay in KEPHIS Plant Health Laboratory, Kenya. With the support from BMGF, we were able to optimize this developed RT-LAMP protocol on the Genie II platform for use in the laboratory and in the field.