Good environmental sanitation is a precondition for good health and success in the fight against poverty, hunger and death. It is also central to the human rights and personal dignity of every human being. The study adopted direct field observation, it involved interview and physical assessment. Results were presented in tables and charts, while data analyses were carried using simple percentages and frequencies. The results of findings showed that well/boreholes is a major source of water (75.5%). Also, 13.7% washed toilets daily, while 55.8% washed toilets on alternate days. The study revealed that the dumping of refuse on roadside/open spaces has impacted the environment negatively, some of these impacts are physical nuisance of the solid wastes to the environment, the dumpsites serve as hideouts to rats and other dangerous insects and it emit offensive odor. The study recommended that refuse can be collected regularly to avoid pollution, and there is a need for proper environmental sanitation awareness to educate people on the importance of a clean environment. 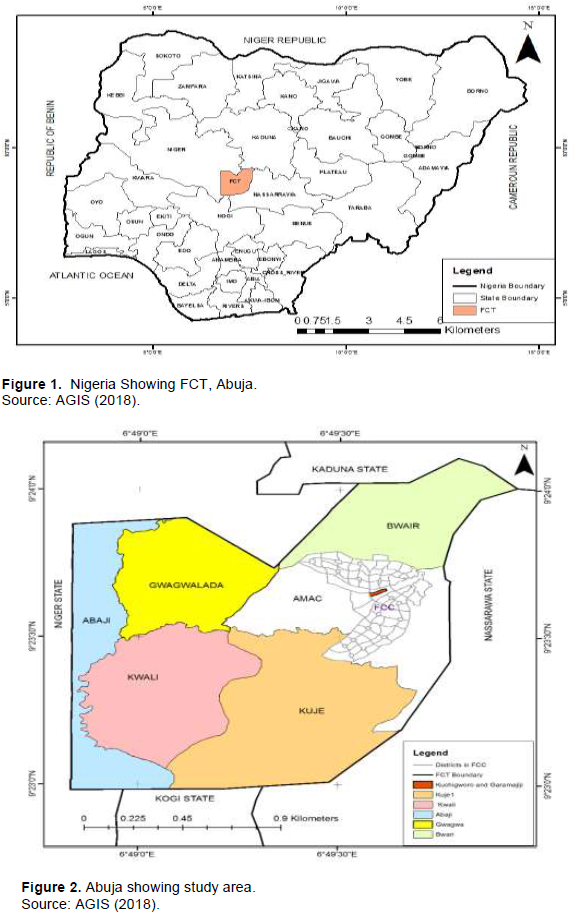 Reconnaissance survey was conducted and oral interview was carried out on the residents of the study area. This enabled the researchers to have a better knowledge of the size of the study area. Furthermore, this also enabled the researchers to determine the relevant issues to be addressed in the questionnaire and to ascertain the most appropriate sampling method and suitable statistical analysis to employ. The study adopted direct field observation; it involved interview and physical assessment. The interview questions were administrated on each selected household. The information collected on site formed the major bulk of the data. Other information was obtained from the Abuja Master Plan and maps were from the Abuja Geographic Information Systems (AGIS). The data were presented in tables and charts, while data analysis were carried using simple percentages, and frequencies in Microsoft excel. The exponential model formula (Pn = P0 (1 + r/100)n) was applied to project for the 2018 population to 3,761 as shown in Table 1. Where Pn is projected population, P0 is population of the base year, r is population growth rate and n is the number of years, which the population was projected (2018-2016= 2). This study collected socioeconomic data from the selected 233 households by interview. Systematic sampling technique was used to distribute the interview questionnaire by selecting at the interval of four households in each settlement.

This section discusses the profile of the respondents, the available environmental sanitation facilities based on residential characteristics, and environmental sanitation practices in the study area. The social statuses were also considered with respect to the ownership of house of dwelling. This enables the study in understanding the dynamic of the relationship between the people and the environment.
Profile of the Respondents
The profile of the respondents discussed are the gender, age, educational status, marital status, occupation, income status and household size; all these are relative to their settlements which are more residential with very little commercial activities. Table 2 shows the distribution of demographic characteristics of the respondents, 114 respondents  (48.9%)  were  male  and  119  respondents  (51.1%) were female. This is an indication of the role women play in sanitation management in the various households in the study area. Traditionally, women by African culture are saddled with the responsibility of handling environmental sanitation and with greater sensitivity towards environmental issues were fully involved in the study.
This implies that the women are the home managers and they handle the care of the environment. A further probe into this shows that 75.3% of the men do not know much about the management and disposal of waste in their houses. The study discovered that, where many details were required for garbage disposal, men indicated that they knew little and thus either failed to respond to some of the questions or called a woman to ask for specific answers. Age is expected to play a significant role as maturity could affect level of environmental awareness. Schultz et al. (2005) as well as Mayer and Frantz (2004) opined that the higher one’s age, the more the person is concerned about the environment. This implies that older residents are expected to be more environmentally conscious than the younger counterparts. 23 respondents representing 9.9% of the respondents were between ages 19-29 years; while 59.7, 24.0, and 4.3% were between ages 30-39 years, 40-49 years, greater than 50 years, respectively. Five respondents (2.1%) did not respond on age group. Furthermore, a large percentage of the respondents had secondary school as their education status (49.8%) as shown in Table 2. Educational status of the respondents plays a significant role in environmental awareness. Studies such as Olofsson and Öhman (2006) as well as Theodori and Luloff (2002) opined that educated people are more concerned about the environment and place more emphasis on preserving the environment. The study also reveals that eighteen percent of the respondents have tertiary education while 30.9% have primary education and 0.9% no education. However, 0.4 of the respondents did not respond on the status of educational level obtained which may be attributed to shame of status.
The survey also revealed that 35.6% (83) of the respondents are traders and 30.5% (71) are civil servants. About 3% of the respondents are professionals; while 7% are welders and 14% of the respondents have mini-Jobs (tailoring, seller girls, house-help), which make up the 21% of others as shown on Table 2. Further probe reveals 5.65% of the respondents who did not respond are jobless and applicants. The study further revealed that 45.7% of the respondents were married, while 30% were single, 12.9% were widowed, and 11.4% divorced. This implies that a very young and active age group occupies the settlements.
On the ethnic groups in settlements, Gbagyi had 30%, followed by Hausa 22% and other tribes such as Igbo, Yoruba and the rest had 27% as shown in Figure 3. This means that the communities shared a good substantial number of other tribes in almost a mix ratio which makes the community to interact well especially in the area of business and social exchange of culture values and norms. Further probe disclosed that most of the Hausas are migrants. The survey further discovers that 52% of the household have a size of 1-5 person per family, 25% have 6-8, and 16% have 9-12 and 6.5% have 13 and above person per family. Thus, due to high cost of living, people in the community tend to control their family birth rate. 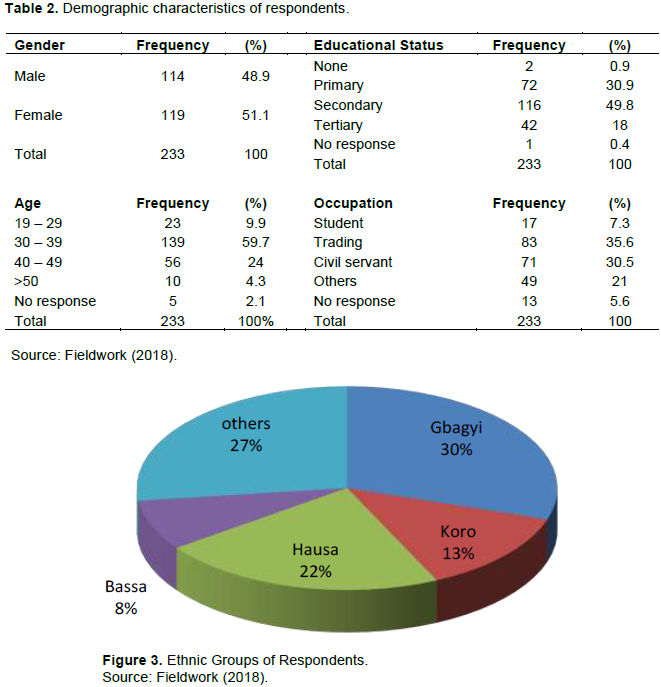 Closely related to residents’ marital and education status is their income level. The field survey revealed that 47% of the respondents earn average monthly income of below N20, 000, 25% earn above N20,000 and below N50, 000, while 15% earn above N50, 000 and 13% has no job. Results also show that 80% of the respondents live in rented houses and 12% are living in personal houses; while 8% do not respond if their houses are personal or rented. Further probe indicate that the house owners do not have any legal title but bought the land from village heads. The implications are that the respondents do not have the economic power to afford land in Abuja.
Environmental sanitation
Information on residents’ of environmental sanitation facilities is presented in this section. It is also imperative to consider the environmental sanitation facilities available to residents. This is necessary because availability of facilities may influence resident’s environmental sanitation practices.
Water
The major source of water in the study area was well/boreholes (79.8%) and only 3.9% get their water from community tap as shown in Table 3. The community taps (one at each settlement) was constructed by the FCT Administration under the millennium development goals (MDGs) Projects (FCDA, 2017). This prevailing situation does not guarantee quality water supply in the area as the water obtained from these sources are not treated before used. Hence, the people stand a greater risk of serious water borne diseases. Also, further probe into the storage system for water reveals that 75.5% of the respondents store water in closed containers. There is less access to the community water as its centrally located and most residents found out waste of time to walk over 3km to take drinking water. This may be also the reason why most houses have borehole or well.
Toilet
Table 4 reveals that 74 (31.7%) respondent had access to flush toilets, 127 (54.6%) make use of pit latrine. 62.7% of the respondents claimed that they sometimes covered their toilets, while 25.7% never covered their toilets. In addition, 13.7% washed toilets daily while 55.8% washed their toilet on alternate days with the use of Izah (41.6%) and Dettol (37.8%). 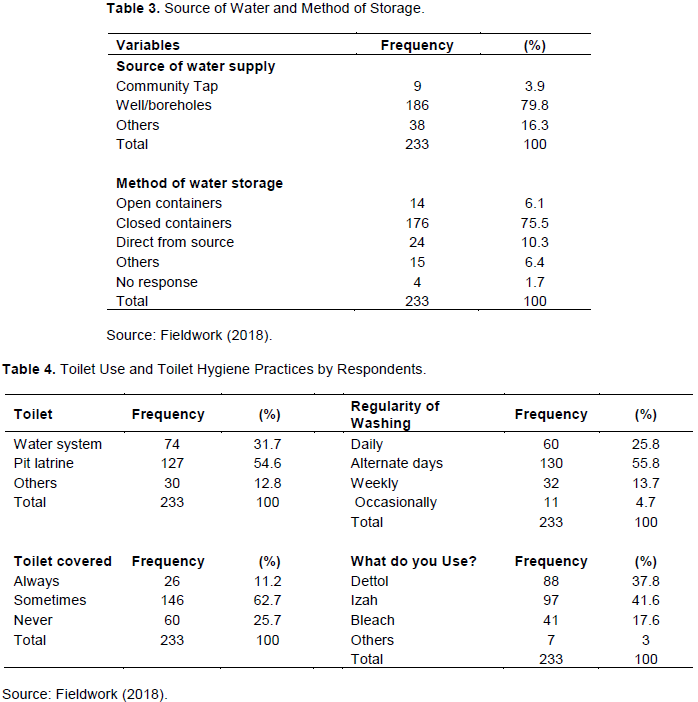 Refuse disposal
The state of refuse disposal is generally absurd which emanate from laissez-faire approach of the people towards indiscriminate dumping of refuse and delay in evacuation  by  the  waste  management  authority.  Over 40% dispose their refuse indiscriminately, out of which 30.0% burnt theirs within the residential environment thereby causing air pollution. 24.5% of the respondents dispose theirs in open spaces and drainages without minding the effect. The implications constitute breeding grounds for rodents, flies, mosquitoes, snake and harbour for other dangerous animals as well as cause serious degradation of the environment resulting in a myriad of health hazards (Plates 1 and 2).
In addition, water sources near such waste dumps easily become contaminated and can lead to disease epidemic such as cholera and Lassa fever among others (Table 5).
Furthermore, liquid wastes are poorly managed. Wastewater from bathrooms, laundries and kitchens are not properly disposed; hence, they constitute foul smelling water for breeding of mosquitoes and dirty ponds for pigs and ducks as shown in Plate 3. Most of the residents affirmed to treating malaria fever several times yearly. Figure 4 reveals that 44.2% of the respondents are of the perception that their environment is clean, while 15.9% admitted to having very dirty environment when asked to assess the environmental sanitation condition of their area. Further probe reveals that the respondents have fair understanding of the effects of poorly kept environment. Majority of the respondents believe that the AEPB is not covering their locality and that only the waste disposed along the Airport Road are removed weekly. The study further questioned the respondents on the role of AEPB of which 92% agreed to know that the agency collects money from the traders. The study probes deeper into the environmental health knowledge of the respondents, 55% of the respondents agreed that the environment  is not  healthy but required more personal and community efforts to clean it up. The respondents also agreed that drying and eating are carried out along the dirty environment as shown in Plate 4. 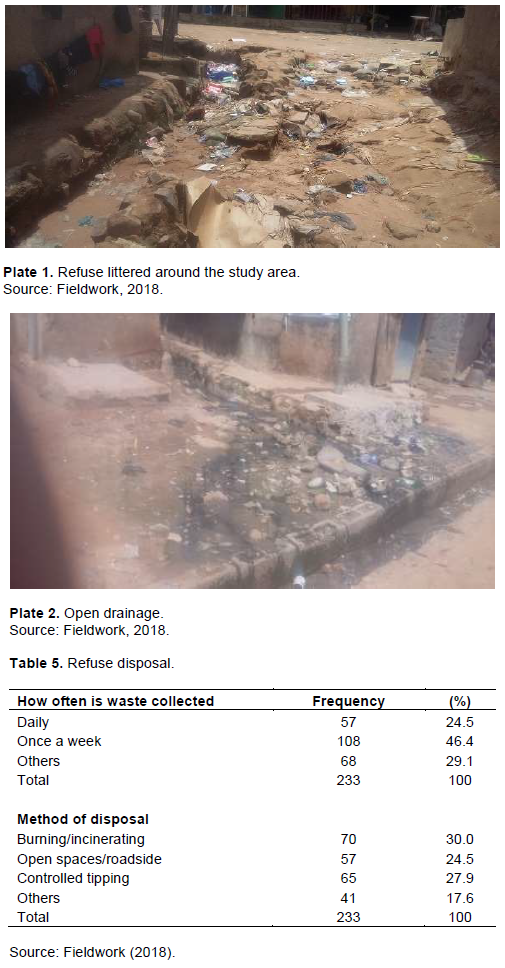 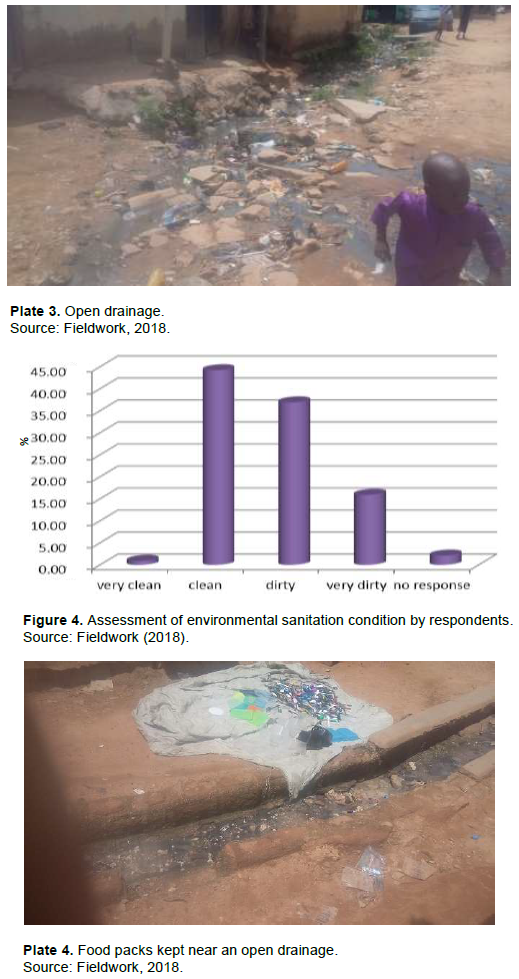 This study assessed the environmental sanitation practices and conditions of Kuchigworo and Garamajiji informal settlements along the airport road in Abuja, Nigeria. The study observed that well/boreholes were the major source of water supply and water was stored mostly using closed containers. Water system was found to be common in the areas. From the study, it can be established that the sanitary conditions of the study area is moderate although there were still some negative environmental practices like dumping of refuse indiscriminately, which causes pollution and exposure to diseases. In addition, the heaps of refuse that are seen commonly in the study area have a negative impact on the beauty of the city. The study further recommends the following to enhance sanitary conditions in the study area and even Nigeria at large:
(i) The first thing that needs urgent attention is in the area of public enlightenment on environmental and health education. Without grassroots environmental education and enlightenment, enforcement of environmental sanitation laws has very little prospect of success. There is therefore a need to educate the people about the danger of  living  in  disheveled  environment,  particularly Nigeria, where effective and enforceable environmental policies are difficult to implement.
(ii) The government at all levels should continually review and update existing legislation with respect to urban planning, building standards, infrastructure and environmental regulations in order to make them more realistic, attainable and compatible with local conditions.
(iii) Regular collection of garbage by AEPB and other agencies.
(iv) Legislations should enforce a law concerning indiscriminate dumping of refuse at road-sides and non-participation in the regular community sanitation exercise. Defaulters should be made to face the full wrath of the law.