The study analysed the impact of Rural Enterprise Development Hub (RED Hub) Project on maize yield of beneficiaries. Out of a total of 398 beneficiaries, 200 maize farmers were sampled using the Cochran sample size formula followed by convenience sampling at the second stage. With the use of a 'before' and 'after' approach, a survey was conducted using structured questionnaires which were administered on the beneficiaries of the project in Mquanduli community within the 9 villages of the community. Descriptive and inferential statistics were used to analyze the data. It was established that, a P-value of less than 0.05 was statistically significant. The study revealed a significant average annual yield increase of maize farmers who benefitted in the project from 1,003 to 1,891 kg  with an increase of 88.53% on hectare basis (t = 100.3 and p <0.05). Also, there was an average increase in annual yield from 1,976 to 4,351 kg which was significant with an increase of 120.19% per maize farm (t = 32.7 and p<0.05 p-value). Determinants of increase in maize productivity were identified using regression analytical technique; They were fertilizer (t = -4.46 and p <0.05), seedling (t = 4.47 and p<0.05) and capital (t = 4.35 and p<0.05). The study recommends sustained subsidy and direct delivery of productive inputs to beneficiary farmers and additional provision to accommodate more maize farmers in Mqanduli.

Maize production in South Africa mostly subsistence-oriented was carried out using several farming systems. Most of these maize farmers are emerging medium/large scale commercial farmers. One of the characteristics of maize farming in South Africa is low yields regardless of the size of the farm.  These account for high unit costs which lead to low returns (Iortyom et al., 2019, 2018; Trefry et al., 2014).
According to Matlou et al. (2017), the largest locally produced field crop and the most important source of
carbohydrates in the Southern African Community (SADC) region which is widely consumed by both animals and human beings is maize. It is also a major diet for both urban and rural areas in South Africa (ARC-LNR, 2016). Maize occupies a central position in the country’s strategy for food security with other food options like potatoes and sugarcane. Commodity value chain agents earn income through maize; the chain includes farmers’ households, produce buyers, processors, exporters and transporters. From the view point of food security and income generation, the importance of maize cannot be over emphasized (Smit, 2016).
Over the years, the South African Government has launched and implemented programs to boost agricultural productivity and to address the cycle of hunger and poverty. These programs were initiated by the national government and stepped down by provincial governments to suit the specific needs of the rural populace at the grass-root level (Obadire et al., 2014). One of these programs, the Comprehensive Rural Development Programme (CRDP) was launched in 2009 at Muyexe village, in Limpopo Province by the President of South Africa, Jacob Zuma.
In 2012, two years after the launch of CRDP the government of Eastern Cape Provincial in South Africa launched the Rural Enterprise Development Hub Project shortened as RED Hub Project aimed at increasing primary production activities, processing and marketing those products within the rural communities (Iortyom et al., 2019). The RED Hub project model makes it possible for rural economic activities to thrive through the facilitation of basic grains like maize, sorghum and soyabean resulting in increased rural incomes (Iortyom et al., 2019; Qongyo, 2015).  The sum of R91 million over three years was allocated to ECRDA and ECDC for the implementation of the project by the Development Bank of Southern Africa (DBSA) (Inkqubela, 2015). The cost of the primary production is jointly funded with 75 and 25% from ECRDA and farmer contributions, respectively.
The Development Bank of Southern Africa (DBSA) through its Jobs Fund agro-processing initiative, the RED Hub Project supported the financing and implementation of maize production, processing and marketing all within a community to generate income for beneficiaries and improve their livelihood (ECRDA, 2013/2014). The project was initially to be implemented for three years, from 2013 to 2015 but the funding has been extended to 2016.
The strategy of the RED Hub project is hinged on Community-Driven Development (CDD) which gives ownership of the project and decision making to the beneficiaries. CDD alludes more to the way a strategy or an undertaking is planned and executed than to the substance of an approach or to the parts of a venture task or program (International Fund for Agricultural Development-IFAD, 2009). CDD took the stage as a response to the failures of earlier programs in South Africa which were aimed at alleviating poverty. These include lending to agricultural institutions and integrated development programs for a geographical area. CDD is a strategy that encourages community groups to be incharge of their development in terms of decisions making and implementation (Iortyom et al., 2019).
Reviews of some extant aforementioned research studies (Baird et al., 2009; Binswanger et al., 2012; Dongier et al., 2003; Kwadwo and Peter, 2012; World Bank, 2013; Obadire et al., 2014; Iortyom et al., 2019) show that the evaluation of any Community-Driven Developmental (CDD) program is relevant, whether it is funded by internationally donor organizations, national or provincial governments. Similarly, the study fills a gap that is important in the body of existing literature by critically assessing the effectiveness of the government of the Eastern Cape Province designed Rural Enterprise Development Hub project in the attainment of improvement in maize production, processing and marketing. This study also provided understanding on how significant and impactful the project has affected maize production on the achievement of poverty reduction among subsistence farmers in the study area.

This study was carried out in Mqanduli Community. The community is located 30 km South of Mthatha and 22 km North of Elliotadle with the Eastern Cape Province, South Africa (Iortyom et al., 2018; Iortyom et al., 2019). Mqanduli was created in 1876 and is located between latitudes 31°49’9’’ South and longitude 28°46’42’’ East (Figure 1). It is 752 m above sea level. The settlements in the area have large uneven and low levels of services. However, some settlements, especially in the heart of Mqanduli, along the major route from Vigesville to Coffee Bay, have rural service nodes with community facilities as a result of recent development within the area. The population density is 268.05/km2 with a percentage increase of +1.15% per year (DRLR, 2015; StatsSA, 2017). 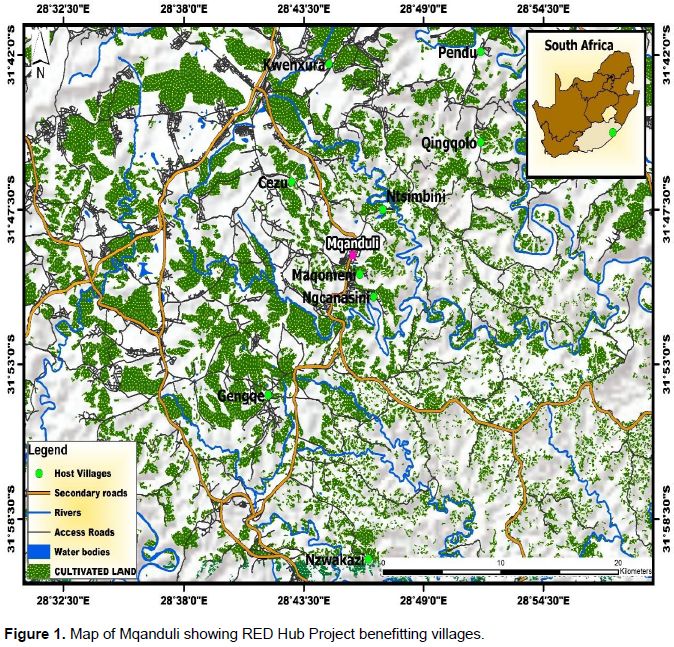 The data used to compare the economic status of beneficiaries before and after the intervention of Rural Enterprise Development Hub Project included; increase in income and profit of maize farmers. This was determined by the means, averages, and percentage changes before and after the project intervention. Comparison between yields of beneficiaries before and after the intervention of the RED Project was analysed using SPSS Version 21. Descriptive statistics, graphs, mean, standard deviation, confidence level, paired wise t-statistics and percentages were used to show the variance in farmers' income before and after the project intervention. All the beneficiaries of the Rural Enterprise Development Hub Project in the nine participating villages at Mqanduli were part of the survey. The economy of Mqanduli is driven by mainly agricultural enterprise comprising maize farming (Statistics South Africa, 2017).
Multistage sampling technique was used to select respondents used for the study. To statistically get the required sample, Cochran sample size formula (Cochran, 1977) was used to get the sample of 200 respondents from 398 farmers who benefitted from the project at a confidence level of 95% with 5% margin of error in the first stage (Iortyom et al., 2018). This sampling formula was used in corresponding studies by Assenga and Kayunze (2016),  Pindiriri et al. (2016), Sharoni et al. (2016), Shoja and Choolandimi (2016), Tesfahunegn et al. (2016), Israr et al. (2017) and Iortyom et al. (2019).  The Cochran sample size formula is shown below:
Where Population = N; Q = the complement of p (proportion); Margin of error = e; Z-Score (Standard Score) = Z; Convenience sampling was done at the second stage to determine the number of maize farmers in various villages who benefitted from RED Hub Project (Iortyom et al., 2018; Iortyom et al., 2019).  Convenience sampling is a type of non-probability or non-random sampling where members of the target population that meet certain practical criteria, such as easy accessibility, geographical proximity, availability at a given time, or the willingness to participate are included for the purpose of a study (Etikan et al., 2016).
These villages and the number of respondents were; Ntsimbini-21; Khwenxura-26; Qhingqolo-21; Phendu-16; Cezu-21; Ngcanasini-36; Magomeni-16; Gengqe-22; and Nzwakazi-21. There is variance in the number of respondents as a  result  of  more  beneficiaries  of RED Hub Project in some villages than others and also the number of participants was based on the response of beneficiaries to the invitation for the exercise. Correspondently, Oladoja and Adeokun (2009) used the same approach to get the required sample for their study on the performance of the National Fadama Development Project in Ogun State. A pre-tested structured interview questionnaire was tested for reliability, to ascertain if the content of the questionnaire is not above the level of the respondents before it was finally administered on the sampled population. Data collected were analysed with SPSS Statistics version 21. Mean (xÌ…), Averages, Frequency Counts and Simple Percentages, Chi-square (x2), p-value based on paired wise t-test, and regression statistics were used to discuss the results from the analysis. Based on the adopted impact evaluation model of the Before and After project intervention, the t-test was used to compare the levels of availability of benefits before and after the project. Where there was a significant difference in the p-value of less than 0.05 of the availability of benefits after the project, the benefits were interpreted as the positive impact of the project. Where there was a p-value greater than 0.05 of availability of benefit after the project, it was interpreted as a negative impact.

Rural Enterprise Development Hub is an applaudable intervention project which has adopted the direct input delivery to  the  beneficiaries  to  improve  on  their maize production in Mqanduli as evidenced by the significant increase in maize yield. This has satisfied an aspect of the project of ensuring a sustainable increase of maize yield through the provision of productive inputs to the beneficiary maize farmers to boost maize production. This also reflects the ability of the project to encourage the communities to participate in the project for sustainable maize production. The study recommends sustained subsidy and direct delivery of productive inputs to beneficiary farmers and additional provision to accommodate more maize farmers in Mqanduli.