Limited treated options to Salmonellosis exist due to the emergence of extended spectrum beta lactamases (ESBLs). This study determined the prevalence of common ESBL genes (blaSHV, blaCTX-M, blaOXA) and profiled their antimicrobial resistance drug pattern. A descriptive cross-sectional study that involved 16 Salmonella enterica isolates from diarrhoeic children at the University of Calabar Teaching Hospital and 39 isolates from healthy birds in poultry farms within the Calabar metropolis. Standard disc diffusion method determined antimicrobial susceptibility while Polymerase Chain Reaction (PCR) using specific primers identified the beta-lactamase genes. All 55 isolates phenotypically demonstrated ESBL production. All 55 salmonella isolates were resistant to Cefotaxime and Nalixidic acid. All the clinical isolates were susceptible Ciprofloxacin and Norflaxacin. The poultry isolates however exhibited varied degrees of resistance to Ciprofloxacin and Norflaxacin. All 55 Salmonella isolates carried the blaSHV genes, blaCTX-M gene (94.5%) blaOXA gene (18.2%).  Molecular characterization identified the blaSHV gene as the most prominent. This study provides relevant data that would help in the implementation of policies regarding the use of antimicrobial agents in clinical and veterinary settings as well provide antimicrobial treatment guidelines that would strengthen infection control processes.

Salmonella enterica serovars remains one of the major causes of food borne gastroenteritis. Non-typhoid salmonellosis usually causes diarrhoea that may not necessarily require antimicrobial therapy (Andino and Hanning, 2015; Cohen Stuart et al., 2012; Nadimpalli et al., 2019). Nonetheless, in cases  where  the  non-typhoid infection becomes invasive, severe complications may result hence requiring antimicrobial treatment options (Cohen Stuart et al., 2012). The emergence and spread of antibiotics resistance especially with the detection of extended spectrum beta lactamases (ESBLs) in Salmonella   enterica    serovars    has   however   limited
treatment options because of their acquired resistance to most beta-lactam antibiotics and fluoroquinolones which would have been sufficient first line treatment for both mild and severe salmonellosis (Al Naiemi et al., 2008; Ifeanyi et al., 2015).
Studies have shown ESBL production by Salmonella enterica to be plasmid mediated and readily transmitted amongst members of the Enterobacteriaceae family as a result (Rotimi et al., 2008). This potential exacerbates the spread of antimicrobial resistance amongst the other members of the Enterobacteriaceae family against beta-lactam antibiotics and other commonly used antibiotics (Oghenevo et al., 2016). Studies have also shown that ESBLs occur because of mutations in the blaTEM-1, blaTEM-2 or blaSHV-1 genes, which are commonly found in the Enterobacteriaceae family. Others enzymes, notably from the cefotaxime resistance family (CTX-M), represent plasmid acquisition of broad-spectrum beta-lactamases originally determined by chromosomal genes (Bajpai et al., 2017). These mutations gave rise to the alterations in their amino acid configuration and conferred on these enzymes the ability to hydrolyze a broader spectrum of antibiotics (Bajpai et al., 2017).
More than 350 different naturally occurring ESBL variants have been discovered and classified into nine distinct structural and evolutionary families based on their amino acid sequence comparisons (Sharma et al., 2010). They include, blaTEM, blaSHV, blaCTX-M, blaPER, blaVEB, blaGES, blaBES, blaTLA, and blaOXA (Sharma et al., 2010).
Not much data have been documented regarding the prevalence of the ESBL-producing genes responsible for the antimicrobial drug resistance, especially in Nigeria. This study determined the prevalence of the common ESBL genes (blaSHV, blaCTX-M, blaOXA) in Calabar state, Nigeria and profiled their antimicrobial resistance drug pattern. 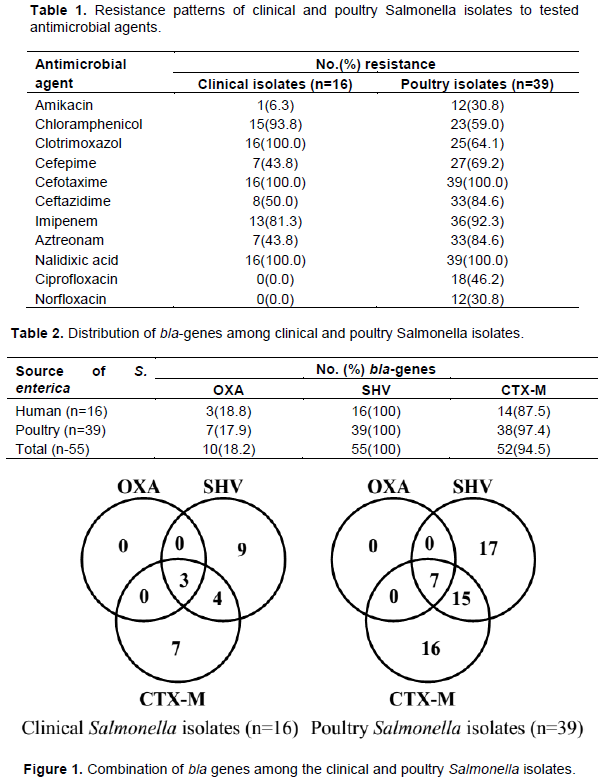 It became imperative to profile antibiotic resistance patterns because incorrect identification of antibiotic resistance usually leads to inappropriate antibiotic prescription, which may in turn select and give rise to new   resistant   genes.   This    study   profiled   antibiotic resistance and determined the prevalence of the common ESBL-producing genes (blaSHV, blaCTX-M, blaOXA) in Calabar state, Nigeria.
S. enterica isolates were extracted from 55 isolates of poultry and clinical sources. Based on the result of the ESBL phenotypic screening test kit carried out in this study, all the S. enterica isolates were ESBL producers. All 55 isolates demonstrated 100% resistance to nalixidic acid and 100% susceptible to ciprofloxacin and norflaxacin antibiotics. This agrees with several studies carried out in India where salmonella isolates demonstrated 100% resistance to nalixidic acid with susceptibility to ciprofloxacin (Crump et al., 2003; Kownhar et al., 2007; Ye et al., 2018). These antibiotics belong to the quinolone/fluoroquiniolone drug class. Studies have shown Quninolone resistance to be as a result of mutations in the DNA gyrase (gyrA and gyrB) and topoisomerase IV encoding (parC and parE) genes (Heisig et al., 1995; Ye et al., 2018). Other studies have also reported the presence of plasmid mediated quinolones resistant (PMQR) genes carried by the ESBL-producing plasmid, which facilitates the selection of higher-level resistance to quinolone drugs (Ahamed Riyaaz et al., 2018; Carfora et al., 2018; Jacoby et al., 2014; Kongsoi et al., 2015). A combination of both factors with the possible presence of PMQR genes to a greater extent, we believe could be responsible for the observed resistance to Nalixidic acid and the increased resistance to Ciprofloxacin and Norfloxacin in the poultry isolates.
Other studies have also suggested that the in vitro resistance to nalixidic acid could be used as a pointer to the actual level of in vitro resistance to ciprofloxacin (Campioni et al., 2017; Klemm et al., 2018). According to the Clinical and Laboratory Standard Institute  (CLSI) guidelines, the resistance to any antimicrobial agent in the fluoroquinolone drug class has an impact on the resistance of other antimicrobial agents within this drug class (Sahu et al., 2018). This implies that the resistance observed by the Salmonella enterica to nalidixic acid in this study is a pointer to the development of resistance to other members of the fluoroquinolone class of antimicrobial agents such as ciprofloxacin and norfloxacin in humans in the Calabar region. This is important information given that fluoroquinolones are regarded as the antimicrobial class of first choice for the treatment of severe infections caused by S. enteica as well as other pathogenic Enterobacteriaceae in humans.
Results further indicated that fluoroquinolone resistance was higher in poultry isolates in comparison to the clinical isolates. This agrees with several studies carried out in Europe, Asia and North America where resistance to fluoroquinolones by S. enterica was far higher in animals than in humans (Britto et al., 2018; Gouvêa et al., 2015; Nelson et al., 2007). Given that poultry is one of the most preferred foods of animal origin, this study suggests that the resistant S. enterica isolates in humans could have come from animals via the food chain.
This study showed high rates (93.8 and 59% from clinical and poultry sources respectively) of resistance by the Salmonella isolates to chloramphenicol. This finding was in consonance with a similar study carried out in Brazil were the sensitivity of chloramphenicol was found to be as high as 95% among children with salmonellosis (Brown et al., 2018; Ferreira et al., 2011). The high resistance observed suggests the frequent use of chloramphenicol in both the clinical and veterinary setting.
The emergence of ESBL resistance to beta-lactam antibiotics has also introduced a new hurdle in the treatment of salmonellosis as extended-spectrum cephalosporins (beta-lactam antibiotics drug class), which were typically the antibiotics of choice for mild salmonellosis has become insufficient. Results showed an enhanced degree of resistance to the third and fourth generation Cephalosporins (Cefepime, Cefotaxime, Ceftazidime) thus thwarting the reliability of these antibiotics in the treatment of salmonellosis. In judicious use in both humans and poultry, we believe could be the most probable reason for the selective pressure and consequent resistance to these drugs. Therefore, we suggest strict selection and rotation of antimicrobial agents coupled with the continuous monitoring of susceptibility profiles of antimicrobial agents in order to manage the emergence and spread of cephalosporin resistance.
All the salmonella isolates in this study carried the ESBL-producing blaSHV gene in combination with the blaCTX-M and blaOXA genes making blaSHV the most prominent ESBL-producing gene from S. enterica isolates in this study.

Other combinations may exist in Calabar, as this study does not account for other known bla genes and recommend that more resources be dedicated to fund further research on this area. Nonetheless, the diversity of the Salmonella isolates as a result of the dissemination of these genes is a call for concern and emphasizes a need for an extensive investigation for the presence of these genes in Nigeria as well as the implementation of strict antimicrobial policies in a bid to restrict the spread of these resistance genes and prevent the emergence of new resistant strains.