The main intent of this study is to empirically examine media preferences and perceptions of instructors at Bahir Dar University (BDU) in selected faculties, colleges and school. The survey method of research was employed to conduct the study, and questionnaire was used as a data collection tool. Proportionate stratified random sampling technique was used for the selection of instructors. The findings reveal that Bahir Dar University instructors consume news on a daily basis. With regard to media usage, television stations, radio stations, and websites are the most chosen information source of respondents. Among TV programs, foreign TV news programs are the most viewed by respondents, and ETV has taken the lead as compared to other local TV programs. Concerning radio programs, foreign radio programs are favourites of respondents, and Ethiopia radio programs are their preferences. In addition, instructors use the Internet on daily basis, mainly for searching for information related to their subject areas, sending and receiving e-mails, and searching for daily news. The media content that instructors regularly consume are social issues, sport and politics. Respondents perceive media roles positively, and the highest level of agreement was expressed with the statement that the media help people become better informed and educated. Impartiality and credibility, and independence from political interest are the major criteria for respondents to choose a particular media over another. Finally, age, background, sex, and academic rank are factors that affect respondents’ media perception.

We live in a world where there are different types of media (both foreign and domestic) doing their utmost endeavour to attract the attention of audience. Media contents are addressed to a larger number of audiences that have different compositions.

Media provide us many functions at individual and/ societal level. According to Dominick (1999) mass media have surveillance, interpretation, linkage, transmission of values and entertainment functions for society. The uses-and-gratifications model also divulges that mass media have cognition, diversion, social utility and withdrawal functions.

Nowadays, audience are exposed to various media outlets: print, broadcast and the Internet. But audience have their own reasons for choosing a given media and media content over others. In relation to media choice, Rosengren et al. (1985)cited in McQuail (1992:178) indicate  the presence of a “ range of various motives for choosing media-for amusement, information, social contact, excitement, involvement, etc or, more generally, the bases for (and degree of) selectivity which is actually exhibited in media choice  behaviour.” This notion is very similar to uses-and-gratification approaches in that it perceives ‘‘audience [as an] active and goal oriented. The audience members are largely responsible for choosing media to meet their own needs. ……… audience know their needs and how to gratify those needs (Little and Foss, 2008:301).

Studies related to media preferences and perceptions are common and have been researched in America and Slovenia. Since media education and media research are current phenomena in Ethiopia, little research has been conducted in the field. Similarly, media preferences and perceptions of audiences have not yet been researched in the Ethiopian context.

The main objective of this paper is to examine media preferences and perceptions of BDU instructors in selected colleges, faculties, and a school.

This study was guided by the following research questions:

3. What is instructors’ perception of media?

4. What are the factors that affect instructors’ media perceptions?

The target population for this study is all instructors in Humanity Faculty, Social Science Faculty, College of Science, College of Business and Economics, School of Law, Faculty of Behavioural and Education and School of Law. The total population of the study is 541:73 are females and 468 are males.  One hundred and eighty instructors were selected using stratified random sampling techniques. As shown in the previous figure, female instructors are few in number as compared to their male counterparts in the study site.

For the sake of validity, the questionnaire was appraised by 3 instructors from Journalism and Communication department, and another from English department. Its reliability was also calculated and found to be reliable (0.841).

The research was conducted in 2012. Only Bahir Dar University instructors from selected School, Colleges and Faculties were asked to complete the questionnaire, and participation was voluntary. Of the 541 instructors (468 males and 73 females) participating in the study, 180 were enrolled as data sources.  As shown in Table 1, the majority of respondents were males (86.1%); whereas, the rest are females. At the University of Bahir Dar, the highest number of participants is chosen from College of Science (31.11%), followed by College of Business and economics (23.33%), Humanity Faculty (17.22%).  The least number of participants is from School of Law (6.11%). The majority of participants are between 20-40 years of age. In addition, the majority of participants (72.22%) are Masters Degree holders. 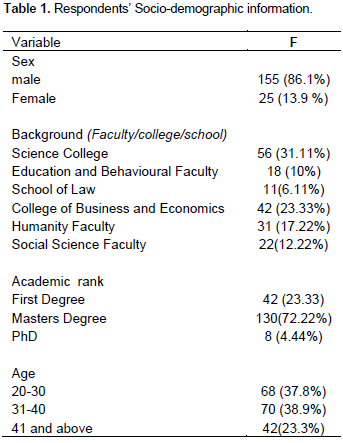 As shown in Table 2, the majority of respondents 143(79.9%) stated that they consume news on a daily basis, while 31(17.3%) of them indicated that they consume it three to five times a week. One point seven percent of participants obtain news once or twice a week, and 2 (1.1%) less than once a week. Among those who consume news on a daily basis, men prevail (81.8%) over women (68 %). In the second group, which consumes news three to five times a week, women prevail (24 %) over men (16.2%). The difference between respondents’ gender and their news consumption is statistically significant (with p-value= 0.036). 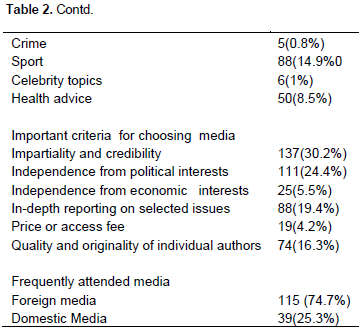 With regard to media content, relatively the highest number of respondents (18.7%) chose Social Issues. Sport came in second with 14.9% followed by domestic politics and foreign politics (12.7 and 12.6%, respectively). Crime and celebrity topics are the least chosen by 0.8 and 1% of respondents, respectively. 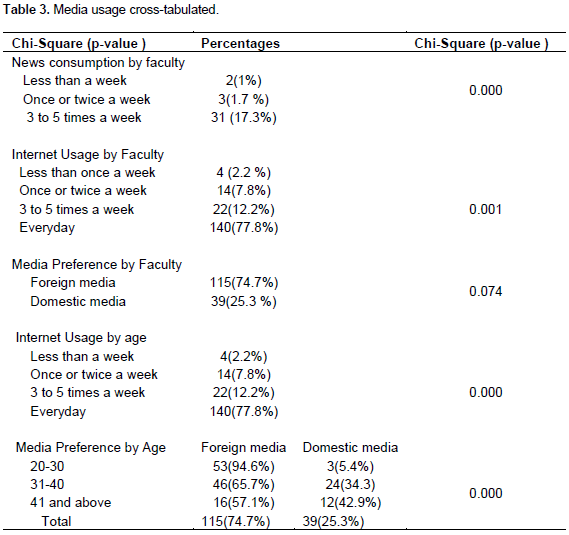 This part was intended to check the respondents’ understanding of the role media play in society. Eight statements to which they could indicate their agreement on a 5 point scale (1 – I strongly disagree, 2 – I disagree, 3 – I neither agree nor disagree, 4 – I agree, 5 – I strongly agree) were provided. 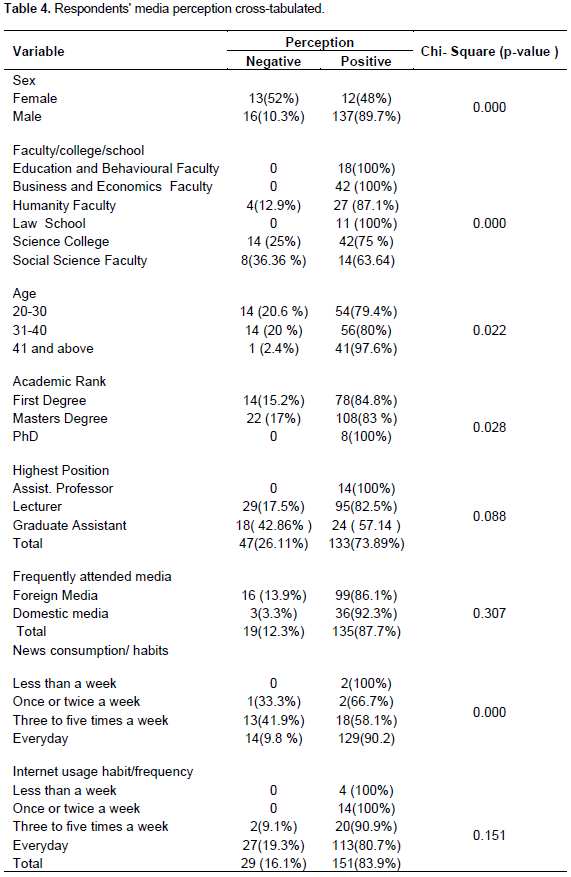 The data obtained through questionnaire were analyzed, interpreted and concluded as follows.

The media content that instructors regularly consume are social issues followed by sport and politics.  With regard to the perception of the role the media play in society, the highest level of agreement among respon-dents was expressed with the statement that the media help people become better informed and educated.

Impartiality and credibility, and independence from political interest are the major criteria for respondents to choose a particular media over another.

Concerning respondents’ media usage, strong asso-ciations were made between the age of respondents, their usage of the Internet, their media preferences, their background and their news consumption.