This is the first report of somatic embryogenesis and synthetic seed production in Angelica glauca, a valuable medicinal plant of Himalaya. Somatic embryogenesis protocol was developed using leaf explants from newly sprouted rhizomes. Mature leaf explants were inoculated in Murishige and Skoog (MS) medium supplemented with 3 µM 2,4-dichlorophenoxyacetic acid (2,4-D) induced 86% callus. Calli (0.5 g) subcultured into different concentration of 1-napthaleneacetic (NAA) and 6- benzylaminopurine (BA) either alone or in combination produced globular structure and their differentiation. NAA (2 µM) in combination of BA (2 µM) germinated 2.2 shoots per culture in 8 weeks time. Plantlets when transferred into sand, soil and peat moss (1:1:1) ratio were found suitable for acclimatization and 75% plantlets survived. Somatic embryos were put into a combination of 3% (w/v) sodium alginate and 100 µM calcium nitrate for 30 min for protecting the somatic embryos and the production of synthetic seeds. Experiments on the evaluation of synthetic seeds are under progress.

Angelica glauca Edgew. (Family Apiaceae), is a perennial, glaucus, aromatic and medicinal herb, distributed across the Indian Himalaya (from north-west to east Himalaya) between 1800 and 3700 m asl (Anonymous, 1985). Its aromatic root is used as a spice by indigenous communities (Collet, 1980) and considered cardioactive, cordial and useful in constipation, rheumatism and urinary disorders (Anonymous, 1985). The powdered root with milk is given in bronchitis (Gaur, 1999) and also useful  in  stomach  ailments  and  female remedies and therefore known as female ginseng.

The root of the species consist of many important secondary metabolites of pharmaceutical importance (Wang et al., 1996) and is preferred the utilizable part. The indigenous communities of the region harvest the root of the species not only for their domestic use but also for trade, which is effectively ending the possibility of future growth and regeneration of the species. Also, overgrazing in the alpine/sublpine forests has contributed for alteration in the habitat of the species (Sundriyal, 1995; Joshi et al., 2001).  All these factors placed the species in Indian Red Data Book (Jain and Sastry, 1984) and ranked number three in the list of medicinal plants prioritized for consultation (Sastry and Chatterjee, 2000). The herbaria records also indicate that the species has reached critically endangered status in the Himalaya (Anonymous, 1997).

Tissue culture has emerged as an important method for conservation of threatened species and enhancement of secondary metabolites (Balachandran et al., 1990; Wawrosch et al., 2001). Reports suggest that clonal material possesses similar genetic constitution similar to mother plant (Hartmann and Kester, 1983). Therefore, clonal propagation through tissue culture techniques can be a best way to enhance the growth rate, reduction in time for the preparation of planting material and production of large number of propagules starting from a single explant (Bonga, 1982). Besides, reports on secondary metabolite production by somatic embryo culture in Ammi vishaga (Apiaceae) provide an encouraging lead for trying the same in A. glauca. This could effectively reduce the pressure of raw material from pharmaceutical houses (Hiraoka et al., 2004). In this regard, it is further encouraging that the amount of secondary metabolites produced by somatic embryos is proportional or sometimes higher than the potential plant parts in some cases (Kaul and Staba, 1967). Also, encapsulation of somatic embryos for the production of synthetic seeds has emerged as advancement and received attention of several workers (Bapat and Rao, 1988).

Keeping this in view, the present study first time describe the somatic embryogenesis protocol for mass multiplication, synthetic seed production and base material for the secondary metabolite production in A. glauca.

Rhizomes of A. glauca were collected from Fojal (Parvati valley- 2660 m asl, Himachal Pradesh, India) in August 2000. The rhizomes were maintained in earthen pots in the nursery of G.B. Pant Institute of Himalayan Environment and Development, Kosi-Katarmal, Almora (1240 m asl). Mature leaf explants (3 × 2 cm) were excised from fresh sprouts (20 to 25 days old) at 4 to 5 leaf stage for initiating tissue culture work. Leaves were thoroughly washed with tap water for 15 min followed by Tween 20 (2% v/v) for 15 min and again washed with distilled water. Sterilization was conducted using aqueous solution of 0.1% (w/v) mercuric chloride for different time durations (0, 5, 10, 20 and 30 min). Treated material was repeatedly washed and agitated (at least 5 times) with sterile distilled water under aseptic Laminar Flow System to remove any traces of HgCl2.

Surface sterilized leaf explants (2 × 2 mm), were placed in the medium with abaxial sides touching the medium for callus induction. Callusing medium consist of MS basal salts (Murashige and Skoog, 1962) containing 3% sucrose and 0.7% agar supplemented with different combination of 1-napthaleneacetic (NAA) (0, 1, 2, and 4 μM) and 6- benzylaminopurine (BA) (0, 1, and 2 μM). After 4 weeks, once the explant had induced callus, the frequency and quality of callus formation was recorded. One set of explant cultured on MS medium without growth regulator served as control.

After the mass production in the medium containing 3.0 µM, 2,4-dichlorophenoxyacetic acid (2,4-D; best responding treatment) calli were then transferred to different concentration of NAA (0, 0.5, 1, 2, and 4 μM) and BA (0, 1, and 2 μM) for somatic embryogenesis. Bipolar structures were scored as somatic embryos. Data on frequency of somatic embryogenesis were recorded after 8 weeks. Somatic embryos, thus formed, were further transferred to combinations of different concentrations of NAA (0.5, 1.0, 2.0 and 4.0 μM) with 2 μM BA and the control treatment (0 μM NAA+0 μM BA) for germination and subsequent plantlet formation. Regenerates with well developed leaves were recorded as shoots. Data on shoot and root formation were recorded after 8 weeks.

For synthetic seed production, 4 to 6 mm long somatic embryos were removed from embryo cultures and dipped in 3% (w/v) autoclaved sodium alginate solution. The embryos were agitated 5 min and then picked up using Pasteur pipette and placed into sterile 100 mm calcium nitrate for 30 min (standardized). During this time occasional shaking was done. The resulting beads were recovered by decanting the calcium nitrate and then washed thoroughly with autoclaved distilled water (Janeiro et al., 1997). Embryos were cultured in MS hormone free medium and incubated in growth chamber (condition described earlier). For each treatment, five embryos with three replicates were used. Data on embryo germination were scored after 4 weeks of incubation.

For acclimatization, complete plantlets (60 No.) were removed from culture tubes and washed  thoroughly in running tap water to remove the adhering medium prior to transformation in plastic pots (5 cm diameter) containing  substrate (120 g w/v), a mixture of autoclaved soil, sand and peat moss (1:1:1 ratio). Potted plantlets were kept initially in a growth chamber. Transparent polybags were inverted over each plantlet (for up to 30 days) to maintain high humidity   and  irrigated   by  ¼  MS  basal  salt  solution  (< 1 week) followed by tap water on alternate days. After 2 weeks monitoring in growth chamber when new leaves appeared plantlets were transferred to polyhouse. The covers were permanently removed and hardened plantlets (45 No.) were transferred to nursery condition.

An efficient protocol for somatic embryogenesis and synthetic seed production has been developed for A. glauca. The highest percentage of aceptic cultures (66.3%) was obtained using HgCl2 for 10 min (Figure 1). Further increase in time duration in HgCl2 drastically reduced the percentage survival of the explants.

Of the various concentration of 2,4-D tested, 3 µM 2,4-D resulted in significantly (P < 0.05) higher frequency (86.7%) of callus formation (Table 1 and Figure 2A). The initiation of callus was also quick in 3 µM 2, 4-D (data not shown) as compared to others. Light cream callus was obtained from the cut end of leaves after 4 weeks of culture. 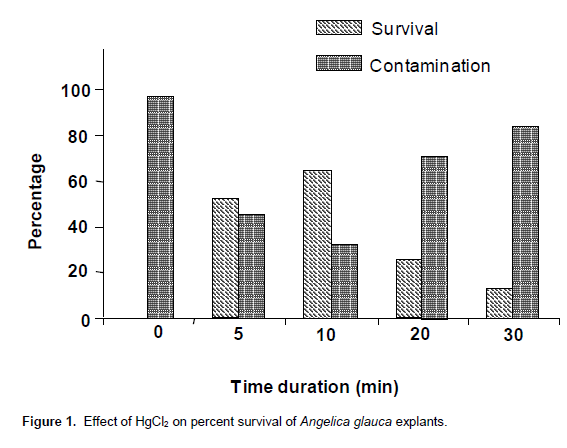 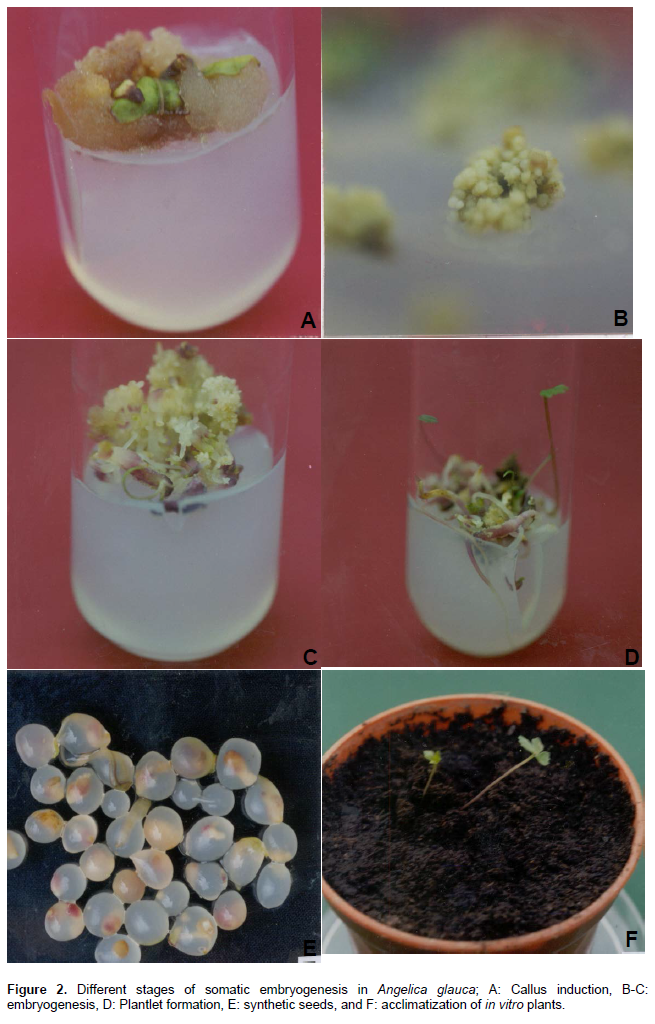 Further increase  in  2, 4-D  concentration  considerably reduced the frequency of callus induction. The control set could not produce the callus, however, browning and wilting was observed.

When 4 weeks old calli were transferred on MS medium supplemented with different combinations of NAA and BA, somatic embryos emerged from the peripheral areas of the callus mass (Figure 2 B and C). NAA and BA (2 µM each) responded significantly (P<0.05) better to other concentrations and 100% cultures showed embryonic callus (Table 2). When compared to control, callus did not turn to embryonic callus. As the differentiation progressed, the embryo appeared from other parts as well. Most of the embryos expanded sequentially and protruded to form shoots to roots. The two leaf sheaths enlarged and elongated (Figure 2D). At maturity, the basal region of the embryo contracted and whole structure was easily dislodged from each other and the parent cell. Among different combinations, BA and NAA (2 µM each) proved to be the best and produced 2.2 shoots per culture (Table 3).

Observations for acclimatization experiments revealed that well rooted plantlets when transferred to autoclaved sand, soil and peat moss mixture (1:1:1 ratio), 75% plantlets survived in nursery condition  (Figure 2F).  A  comparison of available tissue culture protocols for Angelica species (Table 4) reveals that the present protocol for A. glauca has an advantage in terms of multiplication potential and long term utilization of synthetic propagules.

Sterilization of the explants plays a crucial role with respect to the success of the experiment. Mercuric chloride (HgCl2) is used in controlling several microbial infestations (Bonga and Aderkas, 1992). Treatment of HgCl2 in the present study for >10 min proved to be deleterious. This could be attributed to its penetration in the cutinized cell wall and precipitation of cellular proteins (Sharma and Sharma, 1980).

As per somatic embryogenesis, combination of BA and NAA has been reported to induce somatic embryogenesis in Cicer species (Barna and Wakhlu, 1993). Previous studies have also demonstrated that a proper balance between the type and concentration of plant growth regulators at different stages of embryoid development is essential (Rangaswamy, 1986). The best responses with regards to the formation of embryos in auxins have a major impact on induction of somatic embryos in most regeneration systems (Ammirato, 1983; Raghavan, 1986).

Redenbaugh et al. (1987) observed that variables related to the encapsulated method, including type and concentration of alginate medium and method used to produce the synthetic seed, were responsible for significant variation in the conversion percentages for alfafa, carrot and celery embryos.

In the present study, better response of plantlets in sand, soil and peat moss mixture (1:1:1 ratio) may be due to high moisture retention capacity of peat moss. In general, a high humidity and low transpiration has been considered a prerequisite for the better performance of in vitro raised plants during the phase of acclimatization (Kozai, 1991).

This study concluded that development of somatic embryos could be useful for mass multiplication of the species, base material for secondary metabolite production, and development of synthetic seeds production. For example synthetic seeds of the species have enough scope for cryoperservation and long term utilization. Similarly, in vitro production of secondary metabolite could reduce the pressure on natural habitat, however, chemical investigation need to be compared with natural stock prior to reach any conclusion.

The authors wish to thank Dr. S. Airi, and colleagues of CBD group for their support and help. The financial assistance from the Department of Biotechnology, Government of India     (BT/PR1118/PB/17/050/98)  is   gratefully acknowledged.