Cell migration is the process of individual cells or cell clusters moving from one location to another. Cell migration occurs either pathologically or physiologically in humans based on the outcome, including wound healing, cell growth, cell differentiation, and cell proliferation (Martin, 1997). Cell migration in wound healing occurs cooperatively between several cell types, including keratinocytes and fibroblasts, which provide growth factors (Martin and Leibovich, 2005). Platelet derived growth factor and basic fibroblast growth factor are important factors in wound healing (Barrientos et al., 2008). There are  multiple techniques  for  evaluating  cell migration in wound healing, such as the Scratch assay, Boyden chamber assay, and microfluidic chamber assay. The Scratch assay was the first assay used for evaluating cell migration (Liang et al., 2007). A wound gap is created by scratching a straight line on a confluent cell monolayer cultured in a petri dish or tissue culture plate with a pipette tip. The cells are then exposed to the potential therapeutic agent or chemoattractant agent for wound healing. Images of the cell migration across the gap are obtained using a microscope over a 24 h incubation period and evaluated.

A Boyden chamber assay  is  a  subsequent  technique that is performed using a commercially available chamber (Boyden, 1962). The chamber consists of a transwell insert that is placed in the well of a cell culture plate. The transwell contains a porous polycarbonate membrane that allows for cell migration. Cells are seeded on top of the transwell and the therapeutic agent is placed in the lower chamber. Migrating cells extend protrusions through the porous membrane towards the tested therapeutic agent and are seen on the bottom of the membrane. The images of the migrating cells are taken microscopically and counted after 16 h of incubation.

Aloe resin (or Aloe gum) is the dried exudate (latex or juice) collected from fresh cut Aloe vera leaves. Aloe resin is often sold as a reddish black or dark-brown solid mass, which tastes bitter and has an unpleasant odor. The concentrated form was originally produced by boiling the latex in a copper kettle until it reached the required consistency and then left to harden. Currently, the liquid is typically vacuum-dried, which produces a powdered product, called Aloe resin (Figure 1). Studies have revealed that Aloe resin promotes cell viability and cell migration when used to treat a wound (Babaji et al., 2017; Hashemi et al., 2015). The Scratch assay is regularly used for cell migration assessment. However, it is currently not known if the Boyden chamber assay generates similar results.

The aim of this study was to compare the use of the Boyden chamber assay or the Scratch assay to evaluate cell migration by using human gingival fibroblast (HGF) cells with Aloe resin as the chemoattractant agent.

Polyvinyl chloride sheet (PVC, Hatano Research Institute, Food and Drug Safety Center, Kanagawa, Japan) films was used with a size of 3 cm2/2 ml media. The films were used as a positive control, as recommended by ISO 10993-5 (Geneva, 2009). The sheets were sterilized by soaking in 70% alcohol for 1 min, washed in normal saline solution for 1 min, and left to dry. The films were then immersed in DMEM and incubated at 37°C in a 5% CO2 atmosphere for 24 h before testing.

Human gingival fibroblast cells (ATCC® CRL-2014TM) were used in this study. The cells were maintained in DMEM supplemented with 10% fetal calf serum and antibiotics (200 µl/ml-1 penicillin G, 200 µg/ml-1 streptomycin, and 2 µg/ml-1 fungizone) and cultured at 37°C and maintained at 95% relative humidity and a CO2 level of 5%. The medium was changed every other day. When the cells reached confluence, they were detached using 0.2% (w/v) trypsin and transferred to new culture flasks at a 1:4 ratio. The subculture was conducted until there were sufficient cells for the experiments. Cells from the 5 to 10th passages were used for the experiments.

The cells were seeded in 96-well culture plates  at  a  concentration of 1 × 104 cells/well. Each well contained a 100 µl cell suspension, and the plates were incubated for 24 h at 37°C in a 5% CO2 atmosphere to obtain a monolayer culture. After 24 h, the media were removed from each well. Then, 100 µl of the 0.002%, 0.02%, 0.2%, or 1% Aloe resin solution were added. The positive control or negative control was placed into the 96-well culture plate wells (8 wells/test material). After incubating for 24 h at 37°C in a 5% CO2 atmosphere, the viability of the cells in each well was assessed. The experiment was performed three times. The non-toxic concentration of Aloe resin was selected for the cell migration experiment toward the Scratch and Boyden chamber assays.

The cells were trypsinized and seeded in 6-well culture plates at a concentration of 2.5 × 105 cells/well. Each well contained 2 ml DMEM culture medium and the plates were incubated at 37°C in a 5% CO2 atmosphere. After 24 h, the confluent cells were scratched with a P200 pipette tip to create a straight line wound area. The cell debris was washed off with phosphate buffered saline. 2 ml of 0.02% Aloe resin in media was added in 3 wells as the experimental group. DMEM culture media was added in 3 wells as the control group. After 24 h, the cells were fixed with 100% methanol for 2 min and stained with 0.25% Toluidine blue O at room temperature for 2 min. The excess stain was rinsed with distilled water and the wells were air dried. Images of the migrating cells that moved from the upper and lower reference lines into the wound area were taken in each well at nine positions using a microscope. The migrating cells in the experiment and the control groups were counted from the images. The experiment was performed five times.

The cells were trypsinized and plated in the top of the transwell inserts in a 24-well transwell culture plate at a concentration  of  2.5 × 105 cells/well/200 µl serum-free medium. The lower chamber of the transwell culture plate contained 750 µl culture medium with 5% fetal bovine serum with 0.02% (v/v) Aloe resin. Aloe resin was not added in the media for the control group wells. The experiment was performed using 3 wells/group and the plates were incubated at 37°C in a 5% CO2 atmosphere. After 16 h, the media were removed from each well. The cells were fixed with 100% methanol at room temperature for 10 min and stained with 10% Giemsa stain for 1 h at room temperature. After1 h, the Giemsa stain was removed by rinsing with distilled water. The non-migrating cells on the top of the transwell were removed by wiping with cotton. Images of the migrating cells on the bottom of the transwell were taken at 12 positions using a microscope and the migrating cells were counted. The experiment was repeated five times.

After cell counting, the results were tabulated using Excel software (Microsoft Office Excel 2016) and analyzed using 18.0 software for Windows ( Inc, Chicago, Illinois, USA).  The results of each assay were calculated as the percent cell migration in five experiments. There were 15 values in each assay, and the intra-class correlation coefficient (ICC) was determined using a confidence interval (CI) of 95%. The limits of agreement statistics were used to compare the scores (Bland and Altman, 1986, 1990, 1995; Deyo et al., 1991). 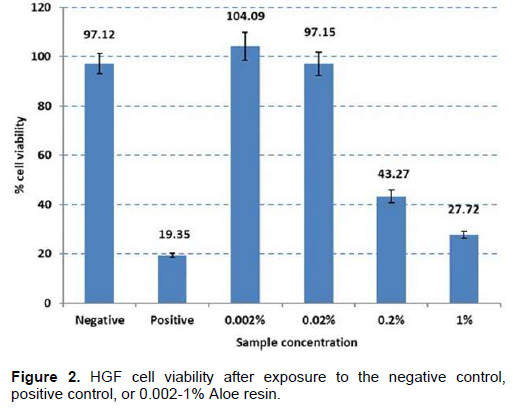 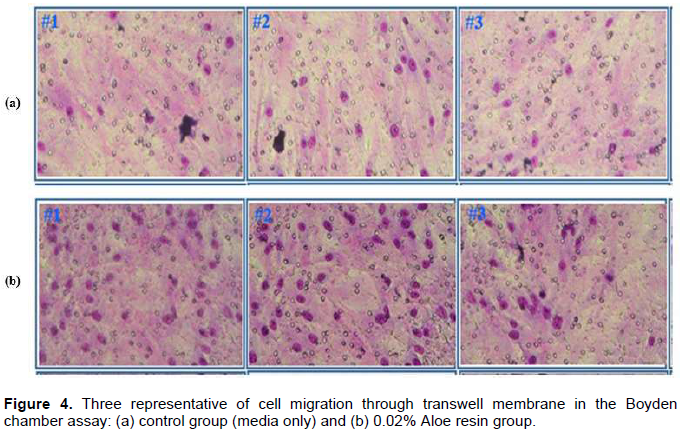 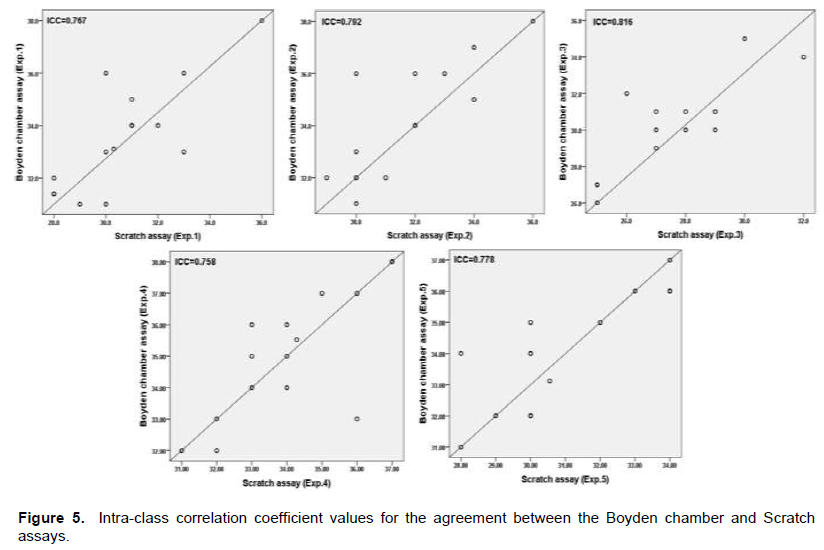 The percentage cell viability of the HGFs after exposure to 0.002 and 0.02% Aloe resin for 24 h were 104 and 97%, respectively, which was similar to that of the negative control (97%, p>0.05). Aloe resin was not cytotoxic to HGF cells at these concentrations. The concentration of 0.02% Aloe resin was selected for use in the cell migration  assays   for   wound   healing  stimulation.  Cell migration was assessed using the Scratch assay compared with the Boyden Chamber assay. The present study revealed that the percentage HGF cell migration in the  Scratch  assay  and   Boyden   chamber   assay  was 29.94±3.5 and 32.4±2.5, respectively, after incubating the cells with Aloe resin. The Independent samples t-test comparing the means for the two groups indicated that there were no significant differences between the two cell migration assays (p>0.05). The Intra-class correlation between the two assays in five experiments was 0.767, 0.792, 0.876, 0.758, and 0.778, respectively. The results indicated that the strength of agreement between two assays were at the good level.

The study of Radhakrishnan et al. (2013) revealed both embelin and vilangia impair wound healing by using Scratch and Boyden chamber assays but the correlation of both techniques were not addressed.

The Scratch assay is the original model for assessing wound healing in epithelial or mesenchymal cells (Friedl et al., 2004).  This assay can be conducted in 96-well tissue culture plates or plates with fewer wells. It is a basic method for evaluating cell migration that the technique is easily practiced and inexpensive. The experiment can be performed under standard culture conditions using equipment routinely available in a typical cell culture laboratory. The method of this assay comprises three major steps: scraping a confluent cell monolayer to create a wound area, staining migrating cells with Toluidine Blue O, and cell counting. However, there are some drawbacks to the Scratch assay. The cells should be seeded in each well in a manner that results in a confluent cell monolayer. A high quantity of cells is needed in this assay; thus, it is unsuitable for studying primary cultures or patient samples. Cell clusters also present a problem, because these cells have the potential to migrate in different directions, rather than only into the scratch area. This can cause variations in the number of cells migrating into the scratch area, which can generate variable results between groups/experiments. Moreover, producing an irregular width scratch with the pipette tip is a major concern when using this technique. The gap produced by scratching should be of a similar size in the experimental and control groups to minimize possible variation caused by discrepancies in the width of the wound area. Miniature razor blades are recommended for reproducible wound creation and high quality wounds instead of using a pipette tip (Nyegaard et al., 2016). However, both tools can damage the extracellular matrix in the wound creating process. The cell exclusion zone assay was presented as an alternative  to   the   Scratch  assay  for  the  benefit  of  a non-tumorigenic cell growing with cost is low and reproducibility (Nyegaard et al., 2016). Furthermore, the scraped cells may accumulate at the edge of the gap area and cause problems in cell counting and cell migration for wound closure. Thus, sufficient washing of the gap to eliminate cells and debris in the wound area after scratching should be performed.

The Boyden chamber assay is another assay for evaluating cell migration. It is a commercially available chamber and can be conducted in a standard cell culture laboratory. This method is more expensive compared with the scratch assay. The appropriate membrane pore size must be selected so that it matches the cells used in the experiment. Typically, 3 to 12 µm pore chambers are commercially available. We selected the 8 µm pore size in this study because this size allows for the migration of most epithelial and fibroblast cells. A fibroblast cell is 23 µm in size; thus, the pore size should be smaller than the size of the studied cells. The cells are seeded in the top of transwell in serum-free media. The media with the chemoattractant agent is in the lower chamber to induce cell migration through the membrane pores to the underside of the transwell. The red nucleus in the stained fibroblast cell as seen using a microscope is easily identified and counted on the bottom of the membrane. The accuracy of the analysis using cell counting is not complicated and easier compared with the Scratch assay. The cell exclusion zone assay when compared with the Scratch assay may be the next research to conduct.