This work aimed at investigating the functional types and compositions of bioactive compounds in Xylopia aethiopica. Plant parts (petiole, leaf, seed, stem bark, and roots) were collected from Vandeikya Local Government Area of Benue State, North Central Nigeria. Extracts were qualitatively screened following standard protocols. Phytochemicals were screened and tested. This was followed by quantitative analysis of selected bioactive compounds using double extraction gravimetric method. Data were statistically analysed using SPSS software. From the result, alkaloids, saponins, tannins, reducing sugar, anthraquinones, steroids, flavonoids, and glycosides were present in the parts investigated. The stem bark contained very high amount of saponin (8.33%), alkaloid (5.67%) and flavonoid (5.24%). The seed had moderate amount of the quantified compounds. The high positive correlation between flavonoid and alkaloid (+0.999) was the most significant value (p=0.022) obtained though the quantified chemicals were all positively correlated. Therefore, based on quantity, the bark is the most important part of medicinal importance followed by the seed. Based on functional types of phytochemicals, the petiole is the most important part which contains 7 out of 9 active principles screened, followed by the bark and the leaf. Therefore, the tree could serve as a source of making different types of cheap multifunctional drugs.

Xylopia aethiopica is a tree of more than 20 m of height and 60 to 75 cm in diameter.  It grows in the forest zone and especially along the rivers and in arid areas. The fruit is a slightly hooked cylindrical pod reaching 2 to 3 mm in width. The mature fruits of green colour take a brown - black colouration after drying and they are commonly used as spices. Numerous research studies have confirmed the spice’s anti-inflammatory and antipyretic (fever   reducing)   properties   (Karawya   et   al.,  1979; Fleischer, 2003).

In Nigeria, fruits extracts and stem bark decoction are used in the treatment of bronchitis, biliousness and dysentery (Asekun and Adeniyi, 2004). Fruits are used to counter pain and as a carmative and laxative and they are suspected to enhance fertility and aid delivery (Karawya et al., 1979; Asekun and Adeniyi, 2004). X. aethiopica dried fruit and bark are used to treat asthma, arthritis,  neuralgia  and  chronic  pain  (Karawya   et   al., 1979).

The fruit extract has been shown to be used as antimicrobial agent against gram positive and gram negative bacteria (Tatsadjieu et al., 2004). X. aethiopica has anti-spirochoectal properties so that it works both as a preventive measure and in treatment of primary, secondary and tertiary stages of syphilis. X. aethiopica has been used for treating rheumatism as well as other inflammatory conditions (Tatsadjieu et al., 2004).

Phytochemicals as antioxidants play vital roles in human health (Ivan, 2003; Ayoola et al., 2008; Yusuf et al., 2014). X. aethiopica has been found to contain some phytochemicals which exhibit a wide range of biological effects as a consequence of their antioxidant properties (Fleischer, 2003; Keita et al., 2003). The chemical components of X. aethiopica have been helpful in the avoidance and treatment of cancerous tumors.

An alkaloid is a type of plant derived organic compound.  Alkaloids are generally composed of oxygen, hydrogen, carbon and nitrogen.  Some alkaloids are considered toxic but others are often used medicinally (Ivan, 2003; Yusuf et al., 2014).  Many alkaloids can be used for medical purposes (Fleischer, 2003; Keita et al., 2003).  Atropine for instance is used to stimulate the central nervous system and to dilate the pupils of the eyes (Keita et al., 2003). Anonecaine, an alkaloids constituent of X. aethiopica, is known to have anti-pyretic effect. They are powerful antibiotics and valuable medicine against malaria as well as their application in local anesthesia as pain relief (Kinghom and Baladrin, 1993; Bruneton, 1999; Harbone, 1998)

Flavonoids represent the most common and widely distributed of plant phenolics found in X. aethiopica. Flavonoids prevent oxidative cell damage, have strong anti-cancer activity and protects against all stages of carcinogenesis (Keita et al., 2003; Yusuf et al., 2014; Aguoru et al., 2014). As antioxidants, flavonoids from X. aethiopica provide anti-inflammatory action. Flavonoids are important antioxidants and promote several health effects.  Aside from antioxidant activity, these molecules provides the following beneficial effects; antiviral, anti-cancer, anti-inflammatory and anti-allergic (Fleischer, 2003). Saponins  another   phytochemical   constituent   of   X.aethiopica have wide range of biological properties, they are used to recover homeostasis, have anti- inflammatory and anti- cancer actions. Saponins cause a reduction of blood cholesterol by preventing its re-absorption. They have antitumor and antimutagenic activities and can lower the risk of human cancers by preventing cancer cells from growing apart from their biocidal effects against pathogens (Morisaki et al., 1995; Fleischer, 2003; Evans, 2003; Yusuf et al., 2014; Aguoru et al., 2014).

The roles of active principles, of plant origin, in drug synthesis cannot be over emphasized. Therefore, this work aimed at investigating the types and composition of phytochemicals of medicinal importance contained in the petiole, leaf, seed, stem bark and root of X. aethiopica in North Central Nigeria, tropical West Africa.

The quantitative estimation of the chemical is  presented in Table 2. The stem bark contained very high amount of saponin (8.33%), alkaloid (5.67%) and flavonoid (5.24%). The seed had moderate amount of the three phytochemicals which were relatively low in the petiole. It has been revealed that saponin is positively correlated with alkaloid (+0.999) at 0.029 level of significance. The high positive correlation between flavonoid and alkaloid (+0.999) is the most significant value (p=0.022) (Table 3). This indicates that the presence of flavonoid in any part of this plant is accompanied with alkaloid and vice versa. Saponin and flavonoid are also positively correlated but statistically insignificant. Generally, the high amount of flavonoid and alkaloid is statistically significant (p=0.033) in the three plant parts quantified (Table 4 and Figure 1) 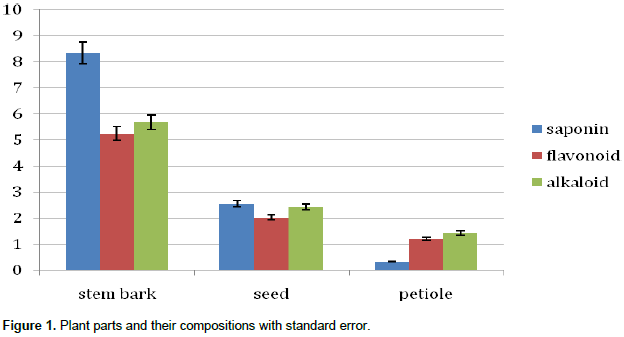 In terms of phytochemical quantity, the stem bark is the most important part of medicinal importance followed by the seed while petiole is the least valuable of the three (1). Therefore, saponin, flavonoid and alkaloid are highly concentrated in the stem bark (Figure 2). Based on functional types of phytochemicals, the petiole is the most important part which contains 7 out of 9 active principles screened.

The high amount of flavonoid in the stem bark, petiole and seed supports the anti-inflammatory, antimicrobial and antitumor activities of X. aethiopica reported by Fleischer (2003). The high amount of saponnin, alkaloid observed in this study therefore accounts for their bitter taste and confirms their numerous therapeutic functions (Harbone, 1973).

Reports on the medicinal uses of X. aethiopica by many authors across the globe (Karawya et al., 1979; Fleischer, 2003; Keita et al., 2003; Asekun and Adeniyi, 2004) are fully supported by this work. This is because the plant contains significant amounts of major active principles of therapeutic benefits. The correlations among the quantified phytochemicals therefore suggest the multifaceted uses of this plant in curing many types of diseases and ailments.

In conclusion, it has also revealed all parts of the plant such as petiole, leaf, seed, stem bark and root are of medicinal importance. Therefore, the tree could be used as a source of making cheap drugs of diverse curative values. It is suggested that further work should be carried out to isolate and purify the active constituents reported. The activity of the various active principles should also be tested on microorganisms and laboratory animals.