Cassia singueana is used in ethnomedicine for the management of pain and other related ailments. This study aimed to investigate the phytochemical constituents of the plant’s root bark linked to the therapeutics claims of its analgesic and anti-inflammatory activities. The plant material was obtained and identified, and its phytochemical fingerprint profile was established using GC-MS technique. The plant’s root bark was dried and ground into powder. The powdered material was extracted using 70% ethanol to obtain the crude extract (CECs). Another portion of the material (200 g) was extracted sequentially using soxhlet apparatus to obtain hexane (HFCs), chloroform (CFCs) and methanol MECs) fractions, respectively. The acute toxicity test (2000 mg/kg) and preliminary analgesic and anti-inflammatory activity (100 mg/kg, p.o.) of the extract and fractions were performed in mice using acetic acid-induced writhing and formalin respectively. The most active hexane fraction (HFCs) was subjected to HPLC analysis to investigate the active phytochemical constituents. They were then evaluated for analgesic and anti-inflammatory efficacy at 25, 100 and 400 mg/kg, p.o. using formalin (50 µl) induced pain in rats. Results showed that the root bark of C. singueana exhibited analgesic and anti-inflammatory activity against the pain induced model. HPLC analysis revealed that the phytochemical constituents linked to these activities are gallic acid, caffeic acid, luteolin and ferulic acid.

Cassia singueana Delile -- in Caill. Voy. Meroe, Bot. IV. 27 (Cent. Pl.  Afr.  28).  (IK), family: Caesalpiniceae (IPNI, 2019) is a woody annual herb or shrubs with small yellow flowers  that  can  grow  up  to  1.2  and  1.5 m  high.  It is widespread in India and tropical Africa, and is used traditionally for treatment of pain and body ache associated with acute malaria attack (Adzu et al., 2003). The plant is also used against stomach spasm, and biological studies showed that it exhibited antipyretic, antiplasmodial activities and anti-ulcer activities (Adzu et al., 2003; Ibrahim et al., 2013). Such medicinal plants had served as agent for scientific exploration, and yielded products that are being applied in healthcare. Most compounds of these plants originally used in ethnomedicines provided direct source of phytomedicines or served as research tools and starting points for the synthesis of bioactive analogues (De Smet, 1998). Despite some advantages in the medical use of plant extracts over isolated entities, there is a need to identify the chemical constituents linked to the observed beneficial effects. The objective of this study was to evaluate the phytochemical component of C. singueana root bark linked to its therapeutic benefit in treating pain and related ailments. The plant material was sequentially extracted and fractions obtained were evaluated using analgesic and anti-inflammation activity models in mice and rats. The phytochemical fingerprint of the plant as well as its safety profiles were also evaluated.

The plant material was collected within the premises of the Adamawa State University, Mubi (10°16′N 13°16′E), Nigeria in December, 2017. The rootbark was cleaned, washed and dried under shade. The dried material was ground into powder using pestle and mortar, stored in air-tight containers, and 200 g of the powdered material was sequentially extracted using soxhlet extractor (Gallemkamp, England) with hexane, chloroform and methanol to obtain HFCs, CFCs, MFCs, respectively. Another portion of the powdered material (200 g) was macerated in 70% ethanol (Malone, 1983) for 7 days with occasional shaking to obtain the crude extract (CECs). The mixture was then filtered, and the solvents were evaporated in vacuum at 40°C using a rotary evaporator. The resultant sample in each case was weighed, transferred to sample bottle tubes and stored at 4°C.

Swiss albino mice (20-28 g) and Wistar rats (180-260 g) of both sexes obtained from the Animal Facility Centre, NIPRD, were used for the study. The animals were kept in plastic cages at room temperature and moisture, under naturally illuminated environment. They were fed with standard feeds and have access to tap water ad libitum. The animals were used in accordance with standard procedures of NIPRD Animal Care and Ethics (NIPRD/SOPs/ 05:3:05).

Fresh sample of C. singueana root bark was used. The root bark (300 g) was chopped into pieces, immersed in water, and then boiled using a Clevenger type apparatus continuously for 2 h. The vapors of the volatile components were carried  by  the  steam  to  a condenser as droplets onto 1 mL HPLC grade hexane layer at the front of the receiver. This was then separated by decantation.

The recovered essential oil was analyzed using GC-MS (Shimadzu QP-2010 GC) equipped with QP-2010 mass selective detector and Shimadzu GCMS solution data system. The sample was diluted in hexane (1/100, v/v) of which 1.0 μl was injected into the instrument using auto sampler. The analysis was performed in triplicate. The retention indices of all the volatile constituents were calculated using a homologous series of n-alkane under the same conditions of analysis. Individual constituents were identified by comparing their retention time with literature compounds (Adams, 2017).

The bioactive constituents of the CECs and HFCs were analysed by HPLC (Shimadzu Corporation, Kyoto Japan) technique using chromatographic conditions earlier described (Adzu et al., 2014). Flavonoids and phenolic acid standards that include apigenin, rutin, quercetin, caffeic acid, ferulic acid and morin were employed for the identification of the phytoconstituents of the extracts by comparing their retention time under similar experimental conditions (Krishna Murthy and Manohar, 2014).

The Limit Test (OECD, 2008) was adapted for the study with little modification. Three male and female mice each were treated with 2000 mg/kg of the extract. One male and female mouse served as control and received 10 ml/kg of water.  All the mice were closely observed for signs of toxicity at 15 min, 30 min, 1, 2, and 4 h, and then once daily for 14 days.

The writhing test was used. Mice were separated into six groups of five mice each. Group 1 served as control and was administered vehicle. Groups 2 to 5 received CECs, HFCs, CFCs and MFCs, respectively at 100 mg/kg, p.o., while Group 6 was administered acetylsalicylic acid (ASA, 100 mg/kg, p.o.)  Thirty minutes later, writhe was induced by 0.7% acetic acid (10 ml/kg, i.p.). A latency period of 5 min was given to each mouse, and the writhing’s were cumulatively counted for 15 min.

Thirty mice were weighed and randomized into six groups (n = 5). Group 1 was given 10 ml/kg of distilled water (negative control), Groups 2 to 5 were treated with CECs, HFCs, CFCs and MFCs (100 mg/kg, p.o.) and Group 6 was treated with 100 mg/kg, p.o. of ASA. Inflammation was induced by injecting 50 µl of 2.5% solution of formalin into the sub-plantar surface of the right hind paw 30 min after treatment. The mice paw volume was measured with a Letica (Spain) digital plethysmometer (LE 7500). Readings were taken before, 5 min later, and at intervals of 20 min for a total of 120 min.

Rats were grouped into six (n = 5) and pretreated orally with water (10 ml/kg),   HFCs   (25,  100  and  400  mg/kg),  acetylsalicylic acid (ASA,100 mg/kg) for anti-inflammation or morphine (Mor, 10 mg/kg) for pain relief evaluation. One hour after, 50 µl solution of 2.5% formalin was injected into the sub-plantar surface of each rat left hind paw. Activities against severity of pain and the anti-inflammatory processes were measured as previously described (Adzu et al., 2014). 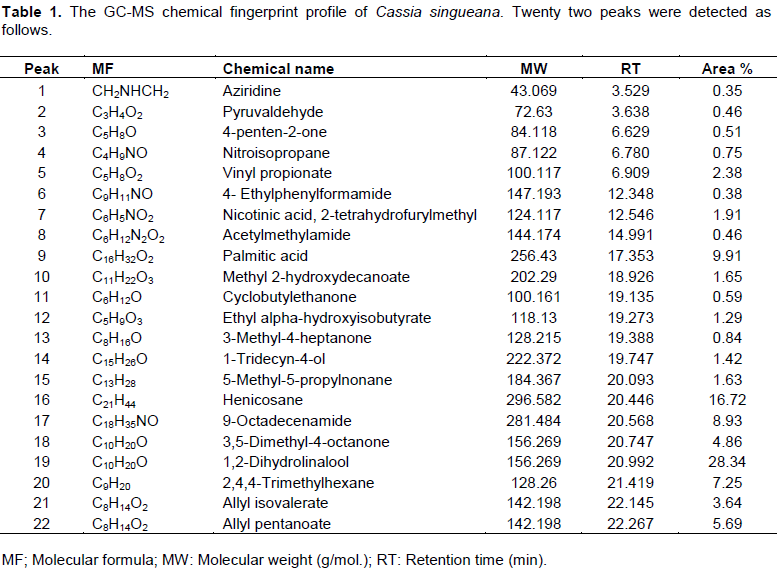 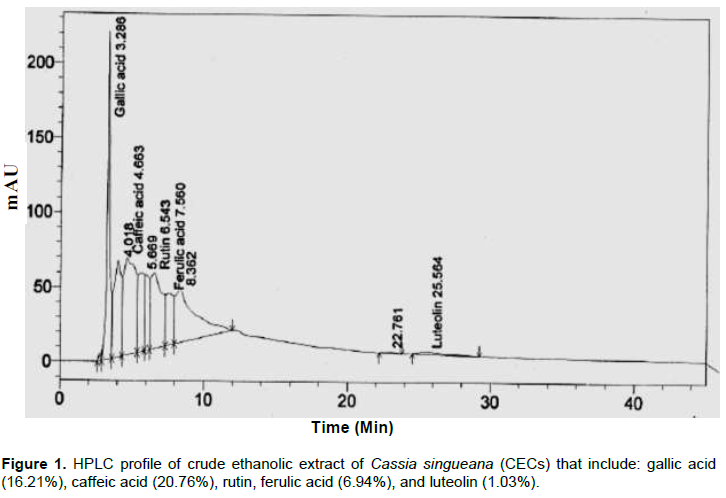 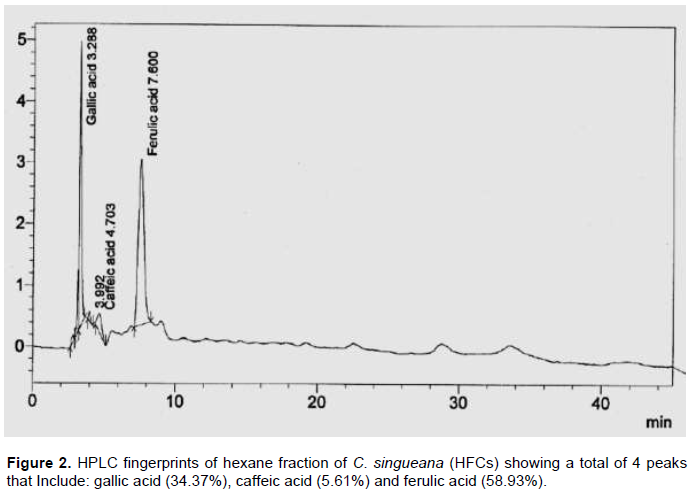 Within 2 h of administration, the predominant sign of toxicity observed were reduced motility and sedation. Afterwards, other signs observed were mouth scratching, paw licking and some non-specific signs. No treatment-associated mortality was recorded in all mice throughout the 14 days duration of the study.

Injection of acetic acid induced writhes (abdominal constriction) in the control. Treatment with the crude extract  and  fraction  of  C.  singueana reduced the mean count of writhing from 12.5 to 24%, with ASA causing 51.67% protection of the induced abdominal writhing when compared with the control group (Figure 3). 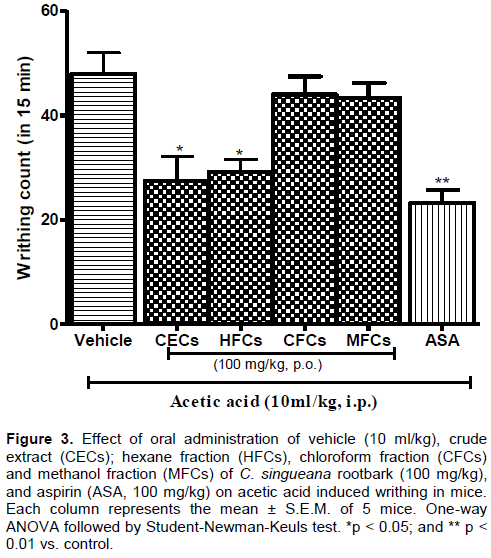 Injection of formalin into the sub-plantar surface of the mice right hind caused acute inflammatory process in the control group (Figure 4). Treatment with the crude extract and fraction of C. singueana reduced this processes. 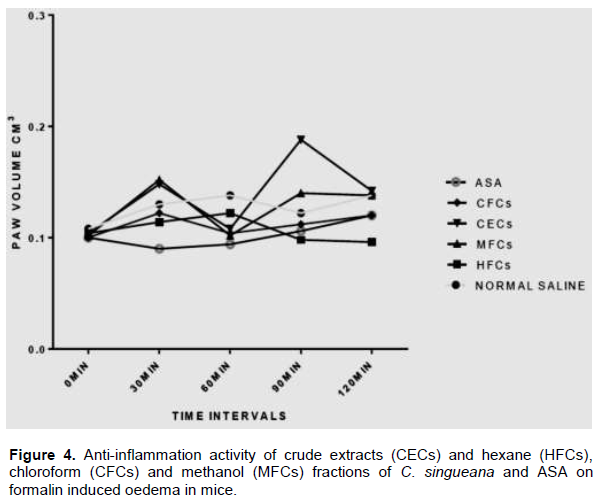 Injection of formalin into the sub-plantar surface of the mice right hind caused high pain score in the control group; whereas treatment with HFCs attenuated this score (Figure 5). 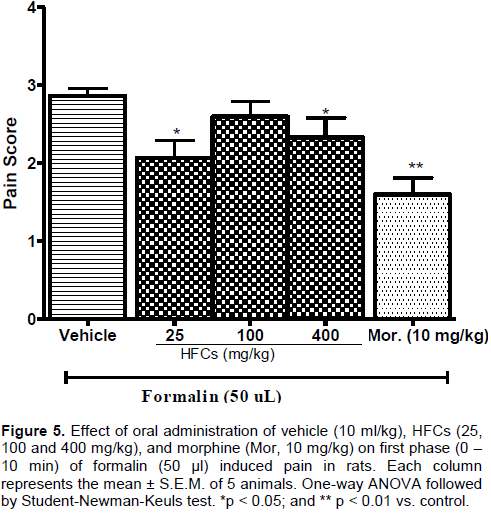 Injection of formalin into the sub-plantar surface of the mice right hind caused acute inflammatory process in  the control group. Treatment with the crude extract and HFCs of C. singueana reduced this processes (Figure 6). 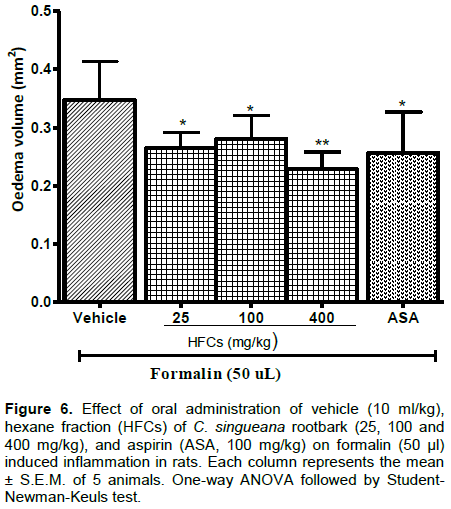 The phytochemical fingerprints of fresh C. singueana root bark investigated using GC-MS technique revealed various constituents of its essential oil. Such fingerprint profiling are used for quality control; and is important for validity and subsequent stability checks, even if they are not directly related to activity (Bilia, 2014).

CECs and HFCs were safe in mice. They also demonstrated anti-inflammatory and analgesic activities against the experimentally induced laboratory models. Acetic acid-induced writhes is used in detecting analgesic effect of medicinal agents and is considered as a model of prostaglandin synthesis sensitive response. The most active HFCS exhibited potent analgesic activity on both phases of the formalin test. This test which is biphasic is recommended for studying the mechanisms of analgesic agents. The first phase (0 -15 min) involves stimulation of nociception in the paw mediated centrally, while the second phase (15 – 60 min) is linked to the activation of local inflammatory processes that stimulates pain sensation similar to clinical pain (Meunier et al., 1998). HFCs suppressed both phases of pain suggesting evidence of dual activity involving both centrally mediated and peripherally localized pain relief mechanisms.

The active constituents responsible for the analgesic and anti-inflammatory activities of C. singueana  rootbark  are gallic acid, caffeic acid, luteolin and ferulic, of which ferullic acid is made up 59% of the most active HCFs. This is unique because it linked the analgesic and anti-inflammatory activities of the plant material to these compounds acting alone or synergistically. This might stimulate more interest in these compounds for their development as pain relief agents.

This work was taken from M.Sc. thesis submitted to the Department of Pure and Applied Chemistry, Adamawa State University, Mubi by M.S. Uko. The authors appreciate the technical contributions of Mr. John Apev and Andrew Sule of Department of Medicinal Plant Research and Traditional Medicine, NIPRD; and Mr. Sunday Dzarma and Solomon Fidelis of the Department of Pharmacology and Toxicology, NIPRD, Abuja, Nigeria.