The content and chemical composition of the essential oil may vary in certain species according to the climatic period. The aim of this study was to evaluate the influence of seasonality on the chemical composition of the essential oil from Hyptis dilatata flowers, to perform biological activities such as antimicrobial, inhibition of acetylcholinesterase enzyme and to evaluate the toxicity of the essential oil using for the test as indicator Artemia salina. H. dilatata flowers were collected in rainy and dry periods and extracted by hydro distillation using extractor of Clevenger condenser double Spell model. Analysis of essential oil resulted in 22 chemical components. The major constituents for dry and rainy periods were α-pinene (26.2 and 10.9%), 3-Carene (12.2 and 3.7%), fenchone (17% and 14.8%) and β-cariophyllene (16.36 and 30.9%), respectively. The essential oil inhibited the acetylcholinesterase enzyme in 93.4% (rainy period) and 92.4% (dry period). Between the dry and rainy periods, the best LC50 in microbial activity in vitro was obtained in the rainy period tested in Staphylococcus aureus bacterium (LC50 49.8 mg ml-1). The cytotoxic activity of A. salina in H. dilatata essential oil proved LC50 results below of 100 μg ml-1. Therefore, the chemical characterization and testing of biological activities of essential oils showed promising results in the search for new active substances and development of bioproducts of vegetable origin.

The genus Hyptis belongs to Lamiaceae family, consisting of approximately 580 species, many of them with great ethnopharmacological importance. They are distributed mainly in tropical America, southern United States, Caribe and Argentina. In Brazil, it is mainly found in Minas Gerais, Bahia, Goiás and Amazonas states (Lima, 2010). In this family of plants, the use of essential oil is common in the population of folk medicine as coding and remedy and they have been used as antioxidant, anti-inflammatory, antihypertensive, antitumoral, gastroprotective, insecticide, antibacterial, antifungal and antiherpetic (Barros et al., 2010; Hussain et al., 2011). Some biological activities have been associated to the content of phenolic compounds, present in the plant (Zgórka and Glowniak, 2001; Valant-Vetschera et al., 2003). In addition, owing to the diversity of volatile constituents found in essential oils of various species of the Lamiaceae family, these essential oils have aroused the interest of the perfume, cosmetics, food and pharmaceutical industries (Fernandez-Alonso and Rivera-Diaz, 2002). Species of genus Hyptis are mostly aromatic with great economic potential, due to its essential oil and presents important pharmacological action, such as anesthetic, anti-inflammatory (Botrel et al., 2010). Defense mechanisms of plants can vary in distinct environmental conditions, leading, consequently, to the production of different secondary metabolites. Factors such as cultivation conditions, soil type and parts of the plant analyzed, may influence the content and chemical composition of essential oils (Botrel et al., 2010). Botrel et al. (2009) studied the chemical composition and content of the essential oils of Hyptis marrubioides Epling flowers of two genotypes, white and purple. In this research, they identified that the content of some of the major principal compounds of the white genotype, such as β-caryophyllene, γ-muurolene and caryophyllene oxide, was higher compared to the purple genotype, and also observed that the essential oil content was the highest in the inflorescence of the white genotype. Researchers like Santos et al. (2008) studied the essential oils of Hyptis pectinata leaves and identified calamusenona as the major compound, which possess antimicrobial activity. Niero and Malheiros (2009) studied the essential oils of Hyptis suaveolens leaves and identified the antimicrobial compound sabinene as major constituent (antimicrobial activity) while from Hyptis crenata, α-pinene was the majoritary one (antioxidant activity). Urones et al. (1998), isolated, from a Hyptis dilatata species collected in Veraguas (Panama), the well-known compounds carnosol, rosmanol and methyl-rosmanol. Tafurt-Garcia et al. (2014) studying the flowers of H. dilatata from Arauca (Colombia) identifield δ-3-carene, camphor, bornyl acetate, E-caryophyllene and palustrol as the principal constituents. According to Lang and Buchbauer (2012), the δ-3-carene, camphor and bornyl acetate compounds have antimicrobial activity (Lang and Buchbauer, 2012; Misharina et al., 2009), and α-humuulene, caryophyllene and fenchone have antimicrobial and antioxidant activities. H. dilatata species is a perennial sub-bush known as field mint, in Tepequem saw, where it was collected in the municipality of Amajari, Roraima State, Brazilian Amazon rainforest. This species is usually used by the population for medicinal purposes, such as intestinal problems, influenza, and as insecticide. The aim of this work was to evaluate concentration of the chemical compounds present in the essential oil of H. dilatata flowers in two seasonal periods and to realize the biological tests for antimicrobial activity, fungicide, activity with acetylcholinesterase enzyme, as well as the cytotoxic activity using Artemia salina with essential oils.

Analyses of GC-FID for quantification and GC-MS for identification of the essential oil components of H. dilatata flowers showed the presence of 22 constituents (Table 1). 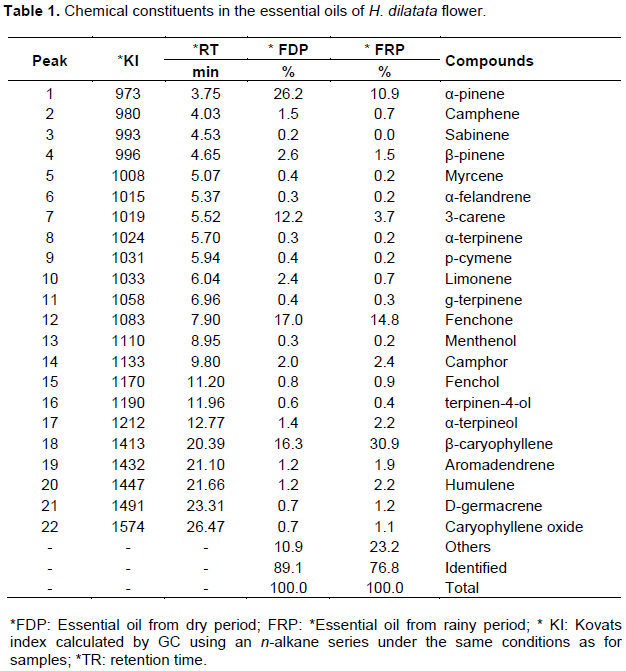 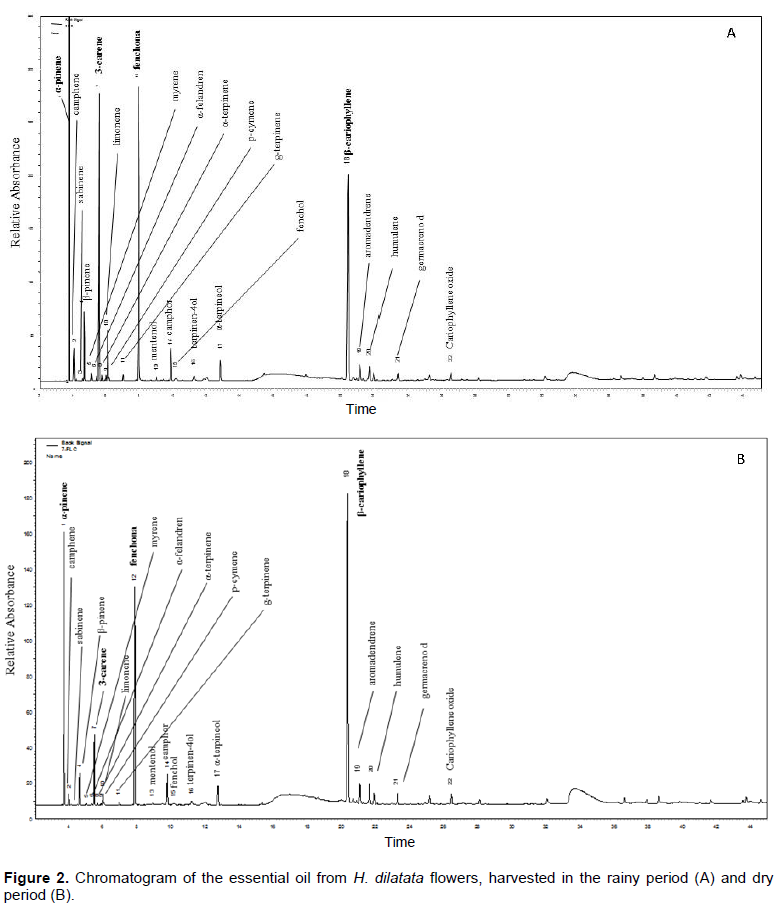 The chemical  composition  of  the  essential  oils  of H.dilatata was mainly constituted by monoterpenes, being fenchone, a bicyclic monoterpene compatible with literature data for volatile constituents of species of genus Hyptis (Martins et al., 2006). The values of α-pinene (0.07%) in the flowers of this species collected in Colombia (Tafurt-García et al., 2014) were much lower than those collected in the Tepequem saw in Roraima State, Brazil, according to the Table 1. In the work of Melo (2013), the 3-carene (9.5%) and camphor (16%) levels were above the levels found in the present work results of our research 3-carene (3.7%) and camphor (2.4%) ,respectively, but lower than the concentration of 3-carene (12.2%) obtained from Hyptis essential oil collected in dry period in this work. Brant et al. (2008) report that in different environments, there are differences in chemical composition of plant species due to different efficiencies in the production of active principles. They also emphasizes that the periods where there is greater production of oil usually do not match the largest production of chemical constituents.
In this research, the content of monoterpenes in essential oil of  Hyptis  flower  presented  in  the  dry  and rainy periods were 69 and 39.5%, respectively. According to Passos et al. (2009), monoterpenes present in volatile oils have potential activities on the GABAergic neurotransmitters (gamma-aminobutyric acid), which are a good tool for the development of anxiolytic and anticonvulsant drugs.
The essential oils of H. dilatata showed high inhibition of acetylcholinesterase enzyme in the rainy (93.4%) and dry (92.4%) periods when compared with the standard drug used eserine (91.72%) and galatamine (94.36%) inhibitions. Extracts above 50% enzyme inhibition are indicated for isolation as potentially inhibitory substances of the enzyme; extracts ranging from 30 to 50% are considered moderate inhibitors and below 30% are weak inhibitors (Trevisan and Macedo, 2003; Vinutha, 2007). Inhibition of the acetylcholinesterase enzyme has demonstrated efficiency in the clinical treatment of Alzheimer's disease, which is associated with deficits of various brain neurotransmitters, such as acetylcholine, noradrenaline and serotonine. Symptomatic treatment of the disease primarily involves restoration of cholinergic function. It is suggested, therefore, that an increase in the level of acetylcholine could be useful to improve patients health (Trevisan and Macedo, 2003; Vinutha, 2007).  Monoterpenes and sesquiterpenes, such as elemol, linalool and α-pinene have been reported to inhibit acetylcholinesterase enzyme (Miyazama et al., 1998; Perry et al., 2000). In the study by Miyazama and Yamafugi (2005), some bicyclic monoterpenes such as α-pinene and 3-carene showed inhibitory effect on acetylcholinesterase. The results obtained for essential oil of H. dilatata flowers in the present work, show that this oil is a potent acetylcholinesterase inhibition.
In the toxicity assay on A. salina, the samples were tested at concentrations of 1000, 500, 250, 125, 62.5, 31.25 and 15.625 μg ml-1. Survivors larval were counted after 24 h. The found for mortality percentages FRP (LC50=5.25) and FDP (LC50=6.91) are as shown in Figure 3. 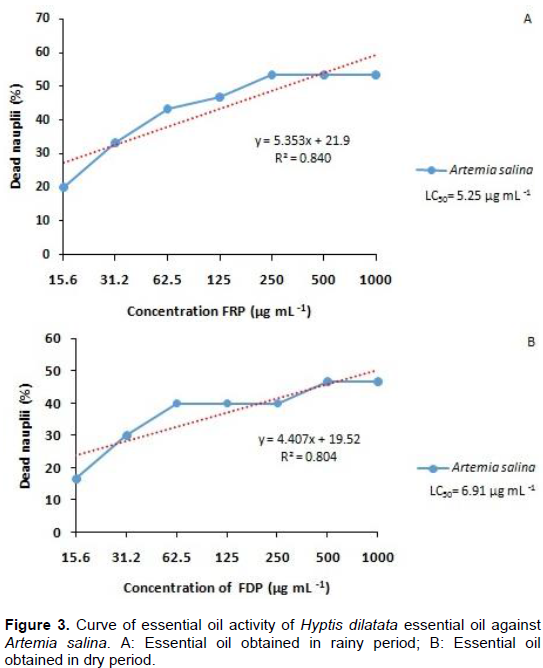 According to the percentage of dead nauplii, in the lethality   assay   against  A.   salina,   samples    can   be considered toxic when LC50 < 100 μg ml-1 (Amarante, 2010). In this assay, the control with DMSO (solvent) did not influence the results, because no larvae died in the presence of this solvent, in the same way as the control performed with salt water.
In the antimicrobial activity assay, essential oil of the H. dilatata flowers collected in both rainy and dry periods, were active against the pathogenic microorganisms. The controls used in the yeast test, showed LC50 of 7.73 μg ml-1 and the miconazole with LC50 <1.95 μg ml-1. The essential oil of the flowers collected in the dry period showed, greater effectiveness in relation to the inhibition of this microorganism by the essential oil harvested in the dry period, in the concentrations of 250 and 125 μg ml-1, with respective  inhibitions of 51.9 and 59.7% as shown in Tables 2 and 3. 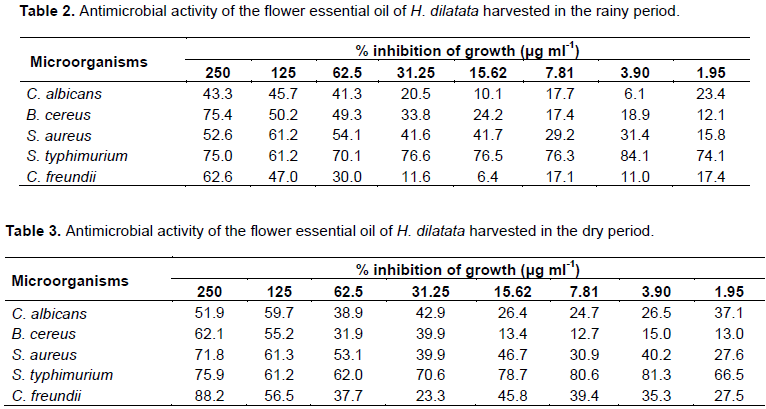 It was observed that they inhibited more than 50% at concentrations of 250 and 125 μg ml-1 both essential oils of all bacteria (Table 2).  These  results are very important and suggest future studies in vivo, which will contribute to a better knowledge of the potential of this species for producing bioproducts of medicinal interest. Tables 2 and 3 present the percentage of bacterial and yeast inhibition by essential oils of H. dilatata harvested in  the  rainy  and dry period.
The LC50 values of the essential oils were calculated using software origin 8.0 (Figure 4). The control used in the bacterial assays was ampicillin that showed a LC50 value  < 1.95 μg ml-1. Although, the inhibition of S. aureus bacterium was higher when the oil was collected during the dry period, the values of 250 μg ml-1 of LC50 were better for the essential oil collected in the rainy period with LC50 = 49.8 μg ml-1 while when harvested in the dry period furnished a LC50 = 121.1 μg ml-1. 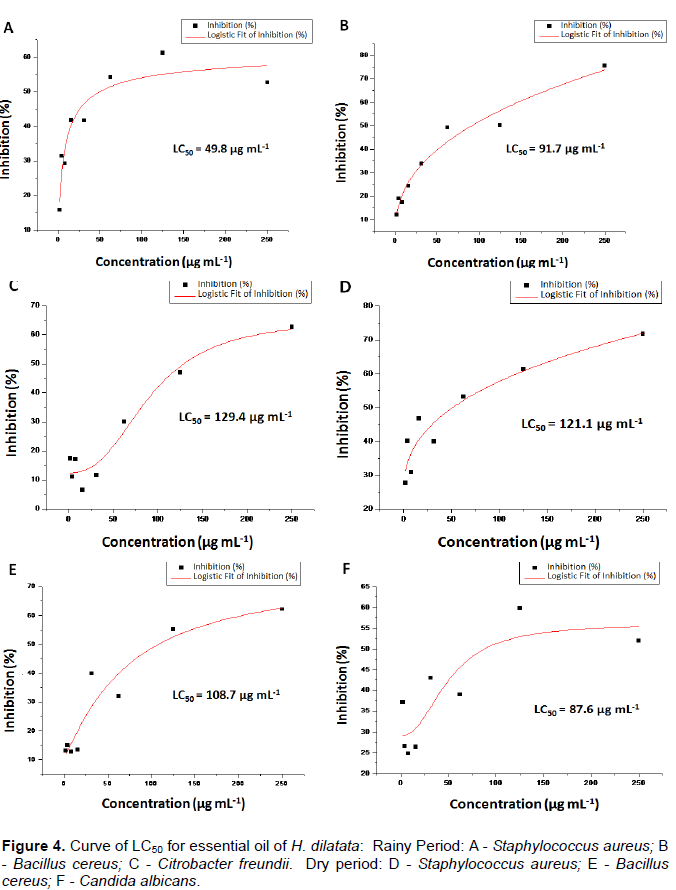 According to Alvarez et al. (2015), a H. dilatata species, collected in San Jose Del Graviane (Colombia), presented monoterpenoid hydrocarbons represented by 2-β-pinene (12.29%), camphor (5.67%) and 1-β-pinene (4.21%) and between sesquiterpenoids and aromadendrene (6.48%), the main components. However, working with complex extracts, it is not possible to attribute the antimicrobial effects to a single component, since the major components can make a significant contribution to the biological activity. In this research, some of the chemical constituents of essential oil of H. dilatata collected in Tepequem saw, Amajari, Roraima, Brazil, in the dry and rainy periods  were  the  same  than those detected by Alvarez et al. (2015), but with different concentrations, such as β-pinene (2.6 and 1.5%), camphor (2.0 and 2.4%) and aromadendrene (1.2 and 1.9%). On the other side, there are some differences in the percentages of some major constituents such as α-pinene, 3-carene, fenchone and β-caryophillene.

Differences were observed on the components of the essential oil of H. dilatata flowers, harvested in rainy and dry periods, as well as in the biological activities towards aceticolinesterase enzyme, bacteria and yeast inhibitions in addition, the bioassays results showed that the species under study has potential to be used in the development of alternative emedicine for treatment of neurode generative diseases and against pathogenic microorganisms.