Acute toxicity and gastric anti-ulcer activity of an aqueous extract of the leaves of Macaranga barteri Müll.Arg (Euphorbiaceae) on rat models

Gastro-duodenal ulcers are diseases that constitute a major public health problem all over the world and particularly in Côte d'Ivoire. The aim of this study was to evaluate the acute toxicity and gastric anti-ulcer activity of an aqueous extract of the leaves of Macaranga barteri (AEMb). Acute toxicity was carried out using the Organization for Economic Co-operation and Development (OECD) Guidelines 420. The anti-ulcer activity of AEMb was evaluated using four models of gastric ulcer induction which are HCl/ethanol solution, ibuprofen solution, pylorus ligation and cold restraint stress in rats. The parameters assessed were mucus production, ulcer surface, ulcer index, pH, acid concentration and volume of gastric contents. Cimetidine, aluminium hydroxide and ranitidine were used as anti-ulcer standard drugs. The results of this preventive gastric anti-ulcer study revealed that for doses ranging from 62.5 to 500 mg/kg body weight (b.w), AEMb dose dependently prevented gastric lesion formation (p<0.001) in the four models. The inhibition values were 98.96, 94.11, 90.73 and 96.89% on ulcerations induced respectively by HCl/ethanol, ibuprofen, pylorus ligation and cold restraint stress at the dose of 500 mg/kg b.w. This cytoprotective action was accompanied by a significant increase in gastric mucus production. These results suggested that the preventive anti-ulcer activity of AEMb may be due to a cytoprotective effect. The median acute toxicity LD50 value of AEMb was higher than 5000 mg/kg b.w. This extract was classified as nontoxic in the Globally Harmonized System of Classification and Labelling of Chemicals (GHS). Phytochemical compounds such as polyphenols, saponins, alkaloids, sterols and polyterpenes found out in AEMb could be responsible for its effects. In conclusion, the antigastric ulcer and the non-toxic effects of the aqueous extract of M. barteri could justify its use in traditional medicine for the treatment of gastro-duodenal ulcers.

Gastric ulcers are heterogeneous disorders, which are manifested as a rupture in the wall of the gastric mucosa bathed by acid and pepsin (Harold et al., 2007). Gastric ulcers occur when there is a lack of balance between aggressive factors like acid, pepsin and local mucosal defense factors such as bicarbonate, mucus secretion and synthesis of prostaglandins (Harold et al., 2007). Gastric ulcers are mainly caused by Helicobacter pylori infection in 75 to 80% of the cases (Brown, 2000). However, non-steroidal anti-inflammatory drugs (Yeomans et al., 2009), alcohol and tobacco consumption can also trigger gastric ulcer (Soberg et al., 2010). In Côte d'Ivoire, epidemiological studies on gastro-duodenal ulcer diseases showed prevalence of up to 7% in 1999 (Kadjo et al., 1999) and 19.3% in 2016 (Soro et al., 2016). Many treatments are proposed by modern medicine for the eradication of gastric ulcers. Although, these medications are useful and effective, their success is overshadowed by their various side effects. Treatments are also too costly for populations, especially those living in developing countries. In addition, health centers are sometimes non-existent or too far (Keïta, 1990). Because of these problems, many people use herbs for their health care particularly in the treatment of gastric ulcers. However, the World Health Organization (WHO) recommends medicinal plants that scientific evidence is established for their harmless and therapeutic efficacy (OMS, 2002). Thus, according to WHO recommendations, Macaranga barteri (Euphorbiaceae) was chosen. M. barteri is usually a shrub or small thorny tree about 20 m high and 1.30 m in girth, sometimes with adventitious roots.
The leaves are simple, alternate, obovate oblong or obovate elliptic. The flowers are very small and are grouped along the axils in small glomerules. The fruits are small capsules, irregularly ovoid or globose (Burkill, 1985). M. barteri has several ethnobotanical uses. In Nigeria, the plant is used as a vermifuge and febrifuge. It is also used to cure coughs and bronchitis (Adesegun et al., 2007). In Sierra Leone and Cote d’Ivoire, the leaves are employed to treat gonorrhea, gastrointestinal ulcers, stomatitis, amnesia and anemia. A decoction of the bark is used against dysentery. It is chewed as an aperitif. It is also useful in the management of swelling, bruising, boils and headaches (Bouquet and Debray, 1974, Oliver-Bever, 1986). An ethnobotanical survey done by Gbadamosi and Erinoso (2015) revealed the use of M. barteri in the treatment of breast cancers. The choice of this plant was influenced by the fact that its traditional use to cure gastrointestinal ulcers is mentioned in many African Pharmacopoeia as stated by authors quoted above. Moreover, no scientific research work has been done concerning its anti-ulcer potential and the toxicity. Hence, the present study was undertaken to evaluate the acute toxicity, the preventive anti-ulcerogenic potential of the aqueous extract of M. barteri using rats models and also to screen the presence of phytochemical constituents which could be responsible for the pharmacological effects.

Plant material
Fresh leaves of M. barteri were collected from the forest of Nangui ¶Abrogoua University (Abidjan, Côte d'Ivoire) in August 2016. Taxonomic identification of these leaves was established by botanists from the National Floristic Center of Felix Houphouët Boigny University of Cocody-Abidjan, Côte d'Ivoire, with voucher no. 14735 in April 06, 1979 in Côte d'Ivoire National Herbarium and authentication was done by botanists of Nangui Abrogoua University (Abidjan, Côte d'Ivoire).
Animals
Albino Wistar rats of either sex weighing between 185 and 203 g of approximately 12 to 16 weeks old, were selected for gastric antiulcer experiments, those used for acute oral toxicity were seven weeks old and weighed between 120 and 125g. They were bred in the Animal House of Physiology, Pharmacology and Pharmacopeia Laboratory of the University of Nangui Abrogoua (Abidjan, Côte d’Ivoire) according to the principles for the care and use of laboratory animals of the Ethical Committee of the University (Nangui Abrogoua, Abidjan, Côte d’Ivoire). They were exposed to 12 h dark/light cycle and given standard food for rats and water ad libithum. Research was conducted in accordance with the internationally accepted principles for laboratory use and care as found in the European Community Guidelines (EEC Directives of 1986 86/609/EEC).
Drugs
The following reference drugs were used: Aluminium hydroxide (Maalox®, Sanofi Aventis, France), misoprostol (Cytotec®, Pfizer, Germany), USA), ibuprofene (ibuprofen®, Sanofi Aventis, France) ranitidine (Zantac®, Bristol Myers Squibb, and Ether (VWR International-Geldenaakfebaan 464-B-3001, Leuven, Belgium). Cimetidine, HCl and ethanol were purchased from Sigma Chemical Company (Saint Louis, MO, USA).
Preparation and administration of the leaf aqueous extract of M. barteri (AEMb)
The leaves of M. barteri were dried under shade and powdered with a machine (Mark RETSCH, type SM 100, Germany). One hundred grams (100 g) of the leaf powder of M. barteri were decocted in 1 L of distilled water for 15 min, filtered (Whatman no. 3) and then stored in desiccators (Mark Fruicell, France) at 45°C for two days. The powder obtained corresponding to the aqueous extract of M. barteri (AEMb) was dissolved in distilled water before oral administration to rats in all the experiments.
Acute oral toxicity study
The experiment was performed according to OECD (2001) Guideline 420. The median acute (LD50) toxicity value of AEMb was determined in rats using the limit test to 5000 mg/kg b.w. Ten female rats randomly selected, weighing between 120 and 125 g were used. They were seven weeks old and were divided into two groups (control and treated groups) after 12 h fasting. The rats of the control group received orally, distilled water (1 ml/100 g b.w.) while those of the treated group received orally, a single dose of AEMb. After AEMb administration, rats were fasted for 3h. Observations which began 30 min after drug administration were intensified for the first 4 h and continued for 14 days. The rats were observed for changes in their skin, fur and eyes and also for some other signs such as tremors, convulsions, salivation, diarrhoea, lethargy, sleep and coma. The weight of each rat was monitored before extract administration and every week thereafter. The formula (1) below was used to calculate variations of rats weights. After AEMb administration, animals were fasted for 3 h and then observed individually at least once during the first weights of the animals were determined shortly before the extract was administered and every week thereafter. At the end of the experiment, the animals were weighed and the weight changes were calculated using the following formula (1):
Weight gain (g) = Final weight (g) - Initial weight (g) (1)
Phytochemical screening
The aqueous extract of the leaves of Macaranga barteri (AEMb) were screened for the presence of polyphenols, tannins, flavonoids, saponins, alkaloids, sterols and ployterpenes, coumarines and quinones. The tests were carried out as described by Bekro et al. (2007). This experiment was repeated three times (n=3).¶
Anti-ulcer studies
The negative control group (Control 1) is the same for all the models. It is composed of 6 rats which received orally distilled water (1 ml/100 g b.w). It is considered as Group 1 in all ulcer-induced models.
Gastric lesions induced by a necrotizing agent (HCl/ethanol)
The method described by Hara and Okabe (1985) was used to induce gastric mucosal lesions. The animals were divided into 7 groups of 6 animals each. Group 2 received 1 ml/150 g b.w. of the necrotizing solution (150 mM of HCl in 60% ethanol) (Control 2). Groups 3 and 4 (positive controls) were pretreated with cimetidine (12 mg/kg b.w.) and aluminum hydroxide (50 mg/kg b.w.), respectively. Groups 5 to 8 were pretreated with the aqueous extract (AEMb) at doses of 62.5, 125, 250 and 500 mg/kg b.w. respectively. The drugs were administered orally. After 1 h drugs administration, 1 ml/150 g b.w. of the necrotizing solution was given orally to each rat except those of negative control group. The animals were sacrificed 1 h later using an over-dose of ether and then their stomachs were removed and incised along the greater curvature. The mucus covering the gastric wall of each rat was collected and weighed. The mucosal erosion was determined and scored by measuring the area of the lesions. The sum of the areas was expressed as ulcer index (mm2). The scoring of stomach lesions was established according to the method described by Robert et al. (1983). The percentage of inhibition (I) was calculated using the following formula (2):

Acute oral toxicity study
The effect of the extract on the body weight of the control and treated animals is shown in Table 1. There was significant increase (p<0.05) in the body weight of treated group as compared to the control¶. No acute toxicity after oral administration of AEMb was observed to the limiting dose of 5000 mg/kg. ¶All the animals survived till the end of the 14-day observation period. This implies that the LD50 of AEMb is higher than 5000 mg/kg b.w. 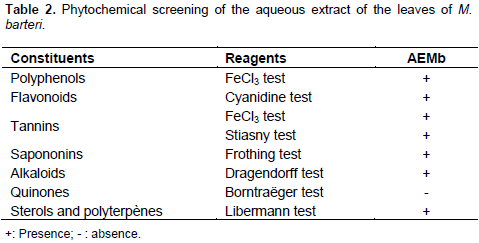 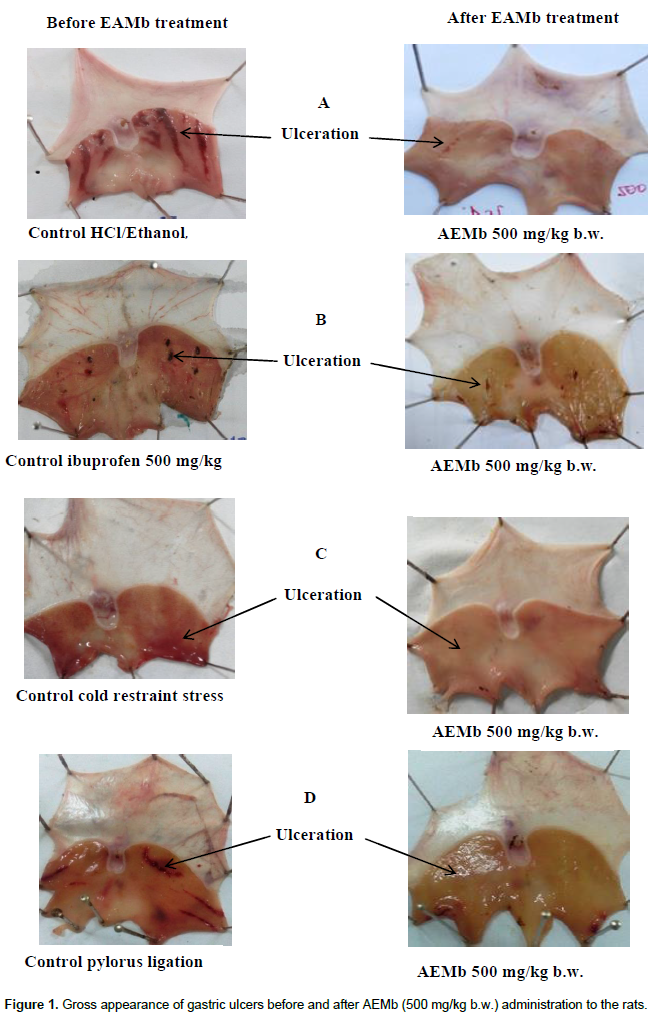 The results of this study suggest that the aqueous extract of the leaves of M. barteri is safe for use and could protect the gastric mucosa against HCl/ethanol, ibuprofen, pylorus ligation and cold restraint stress-induced gastric injury. This cytoprotective action was accompanied by significant increases in gastric mucus production. The various chemical groups contained in this extract could justify the use of the plant by traditional healers. Further work is envisaged to evaluate the healing effect of M. barteri extract as well as its possible long-term toxicity, to isolate, purify and characterize the active constituent(s) and elucidate the exact mechanism of action of AEMb.

The authors are thankful to all laboratory staff of Physiology, Pharmacology and Pharmacopoeia of UFR-SN, Nangui Abrogoua University, Côte d’Ivoire, for their encouragement during these investigations.