Sargentodoxa cuneata is widely used in the treatment of rheumatic arthritis in China. This study was conducted to investigate the anti-inﬂammatory and immunoregulatory activities of the ethanol extracts from S. cuneata and analyze the bioactive constituents. The ethyl acetate (ESCe), dichloromethane (ESCd) and aqueous (ESCa) fractions at a dose of 200 mg/kg significantly inhibited mice ear edema. Furthermore, the ethyl acetate (ESCe) and aqueous fractions (ESCa) inhibited rat paw edema, decreased the levels of Malondialdehyde (MDA) and biosynthesis of the prostaglandin (PGE2), increased superoxide dismutase (SOD) activity, inhibited adjuvant arthritis (AA) rat paw edema, enhanced splenocyte proliferation and macrophage phagocytosis activity. ESCa at a dose of 50 mg/kg significantly suppressed IL-1β and TNF-α levels to 0.101 ng and 15.45 pg in each million macrophages. S. cuneata possessed anti-inﬂammatory and immunoregulatory activities, and phenolic compounds are the important bioactive constituents of this plant.

Some bioactive constituents from anti-inflammatory and anti-rheumatic Traditional Chinese Medicine (TCM), such as triptolide from Tripterygium wilfordii, and sinomenine from Sinomenium acutum, exhibited excellent immunosuppressive and anti-neurodegenerative effects based on inhibition of neuro-inflammation (Jiao et al., 2008; Shukla et al., 2011).

Recently, several anti-rheumatic herbs have become of great interest due to their potentials as possible anti-inflammatory and anti-neuroinflammative agents (Suk, 2012). S. cuneata (Family: Sargentodoxaceae, previously attributed to Lardizabalaceae), a plant endemic to China, has been widely used in TCM or ethnic medicine (called as Hongteng) for the treatment of rheumatic arthritis, acute appendicitis, amenorrhea and menstrual pains. The ethanol and  water  extracts  could  relieve  inflammation, exhibit immunoregulatory and antioxidant effects, referred to as ZhongHua BenCao (1998). Previous phytochemical studies on S. cuneata revealed the presences of various kinds of constituents such as anthraquinones, lignans, flavonoids and phenolic compounds (Damu et al., 2003; Tang et al., 2012). But the systematic investigation on the bioactive components present in the plant have rarely been reported, therefore this present study was carried out to investigate the anti-inflammatory and immunoregulatory constituents from S. cuneata.

S. cuneata stem powder (80 g) was extracted with 80% ethanol under reflux for 2 h (800 mL ×2). The extract was evaporated, and further portioned successively with petroleum ether, dichloro-methane and ethyl acetate. The residual aqueous fraction was subjected to a macro resin column (4.0 cm×35 cm), eluting with distilled water (5-fold) and 95% ethanol (5-fold). The solvents were removed on a rotary evaporator or a lyophilizer to obtain petroleum ether fraction (ESCp, 0.11 g), dichloromethane fraction (ESCd, 0.77 g), ethyl acetate fraction (ESCe, 2.09 g) and aqueous fraction (ESCa, 4.77 g). All samples were stored at -20°C until further use.

Healthy adult male Sprague-Dawley (SD) rats (180 to 200 g) and Kunming mice (18 to 22 g) of either sex were used for the experiment. The animals were obtained from the animal center of Jiangsu University.

Kunming mice of either sex were randomly divided into 12 groups of eight animals per group. Groups 1 to 5  were  treated  orally with  ESC,  ESCp,  ESCd,  ESCe,  ESCa  at a  dose  of  100 mg/kg respectively, while groups 6 to 10 were treated with  a  dose  of  200 mg/kg of ESC, ESCp, ESCd, ESCe, ESCa, respectively. Group 11 received the vehicle control (1% Tween 80, 25 mL/kg), while group 12 was treated with the standard drug indomethacin at 25 mg/kg orally. One hour after administration, edema was induced by applying 50 μL of xylene to the inner surface of the right ear. The mice were sacrificed 30 min after induction of edema by cervical luxation and yield discs (ID 6 mm) was taken from each ear. The anti-inflammatory activity was tested and expressed as percentage inhibition of ear edema of treated mice compared with controls (Yang et al., 2008).

Male SD rats were randomly divided into six groups (six rats per group), group 1 was treated with the vehicle control (1% Tween 80, 10 mL/kg), group 2 positive control (indomethacin, 10 mg/kg), while groups 3-6 were treated orally with ESCe and ESCa at doses of 50 and 100 mg/kg, respectively (Yang et al., 2008). One hour after the oral administration of the extracts, 100 μL of 1% carrageenan was injected subcutaneously into the planar tissue of the right hind paws. Paw volumes were measured using a plethysmometer at 0, 1, 2, 3 and 4 h after administration.  After 4 h, the animals were sacrificed and the right hind paws were dissected rinsed in ice-cold normal saline, and placed in 0.5% trichloroacetic acid at 4°C. The homogenates were centrifuged at 3000 rmp for 5 min. The supernatant was obtained and stored at -80°C for the MDA and PGE2 assays. The blood and liver were likewise obtained from the animals; the serum was separated by centrifugation at 3000 rpm for 10 min and utilized for the estimation of MDA and SOD assays.

Determination of MDA and PGE2 in paw

The lipid peroxidation product malondialdehyde (MDA) in the hind paw was estimated by determination of the level of thiobarbituric acid reactive substances (TBARS) at 532 nm, according to the reported method of Ohishi et al. (1985). MDA content was expressed as absorbance/g of tissue. PGE2 was determined by ELISA according to the instructions in the manuals of the kit.

Determination of SOD and MDA in serum and liver

MDA level and SOD activity in serum and liver tissues were assayed according to the manufacturer’s instructions in the assay kit.

AA was induced by intradermal injection into the right hind paws with complete Freund’s Adjuvant as previously reported by Nair et al. (2010). Male SD rats were divided into 7 groups (eight rats per group) as follows: group 1; normal control (1% Tween 80, 10 mg/kg), group 2; arthritis control, group 3; positive control (tripterygium glycosides, TG, 10 mg/kg), groups 4 to 7 were treated with ESCe and ESCa at doses of 25 and 50 mg/kg by gastric probe to AA rats from thirteenth day to twenty forth day. Paw volumes were measured with a plethysmometer at 0, 4, 8, 12 and 16 days after the administration.

Splenocytes were isolated aseptically from rats and suspended in RPMI 1640 medium  supplemented  with  10%  fetal  bovine  serum (FBS). Splenocytes (1×105cells/well) was incubated with lipopolysaccharide (LPS) (6 mg/L) for 44 h at 37°C, 5% CO2. After incubation, 50 μg/well of methylthiazol-2-yl-2, 5-diphenyl tetrazolium bromide (MTT) was added to the cell suspension for 4 h, and the resulting solution was centrifuged to remove the supernatant. The insoluble formazan was dissolved in 100 μl of Dimethylsulfoxide (DMSO) for 30 min. The optical density of the cultured wells was then measured using an ELISA reader at 570 nm. Results were expressed as ratio of optical density values between treatment and blank control cells.

Peritoneal macrophages was collected from rats peritoneal cavity, centrifuged, washed with D-Hanks (5% FBS), and suspended in RPMI 1640 with 10% FBS at 5×106 cells/ml. After attachment, the cells were seeded with RPMI 1640 (100 μl/well) and further incubated for 24 h at 37°C in a 5% CO2 incubator. After incubation, 0.075% of neutral red dye was added (100 ml/well) and further incubated for another 30 min. The cells were washed with D-Hanks and lysed, and the optical density was read at 570 nm on a Bio-Rad microplate reader.

Determination of IL-1β and TNF-α in peritoneal macrophages

The macrophages (1 ml/well) with RPMI 1640 were incubated for 2 h at 37°C in a 5% CO2 incubator. The cells were washed with D-Hanks solution to gain monolayer macrophages. The cells were incubated for another 48 h in 1 ml of RPMI 1640 including LPS (5 mg/L). The supernatant after centrifugation was evaluated for IL- 1β and TNF-α levels according to the ELISA manufacturer's instructions.

The total phenolic contents were determined by the Folin-Ciocalteu colorimetric method (Beyhan et al., 2010). Folin-Ciocalteu reagent was used and a standard calibration curve: Y= 0.1174X+0.0139 (R2=0.9996) was prepared using different concentrations of gallic acid. The measurement was carried out in triplicate and the results were expressed as mg gallic acid equivalents (GAE) per gram of extract (GAE/g).

As shown in Figure 1, all tested samples inhibited xylene induced ear edema in a dose dependent manner. ESCd, ESCe and ESCa significantly (p < 0.05, p < 0.01) inhibited the ear edema at a dosage of 200 mg/kg. The inhibition rate was found to be 50.3, 61.8 and 69.2% in ESCd, ESCe, ESCa, respectively, while the standard drug indomethacin showed 39% inhibition. 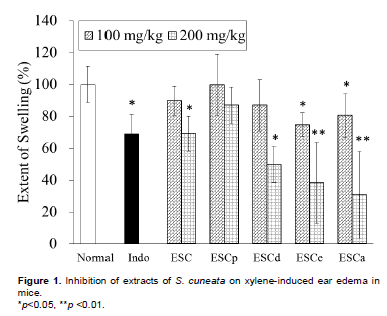 Table 1 shows the effect of various extracts on carrageenan-induced rat paw edema. ESCe and ESCa signi?cantly inhibited rat paw edema within the first 4 h of administration (p < 0.05, p < 0.01). However, ESCa had a higher suppression on edema than ESCe, with ESCa having the highest peak of 68.6% (100 mg/kg) observed at 2 h, similar to the maximum inhibitory effect displayed by indomethacin (69.2%) at 3 h. 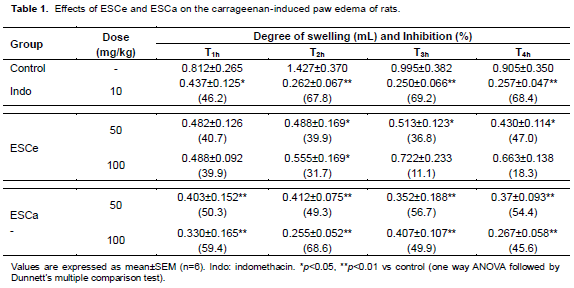 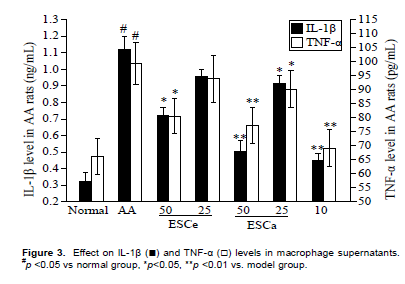 The results obtained in this study provided scientific basis for the traditional usage of S. cuneata as an anti- in?ammatory agent, with ESCa and ESCe having high contents of phenols and showing markedly anti-inflammatory activity. This study preliminarily clarifies possible mechanisms mediating the anti-in?ammatory action of S. cuneata, including the suppression of MDA and PGE2 production, and SOD activity reinforcement in different tissues. Interestingly, after 3 h of administration, the edema observed in 100 mg/kg treated group was found to be more visible than that of the 50 mg/kg treated group, which correlated to the levels PGE2 contents in hind paws (Table 1 and 2).

This implied that PGE2 could be an important inflame-matory biomarker induced during swelling. ESCa and ESCe exhibited significant suppression on MDA levels, which was probably due to the increase in SOD activities. These were probably the mechanisms responsible for anti-inflammatory activity of S. cuneata. The immunoregulatory activities were also evaluated for a comprehensive explanation of its traditional use. Splenocyte proliferation is an important indicator reflec-ting the organism’s immune function, and macrophage cells could affect immune response and pro-inflammatory factor’s release. ESCe and ESCa could enhance splenocyte proliferation and macrophage phagocytosis, yet inhibit the IL-1β and TNF-α expression, thus implying that ESCe and ESCa possesses good immunoregulatory activity. This partly confirms the basis for the traditional usage of S. cuneata in the treatment of rheumatic arthritis.  The   immunosuppressive   positive   control  TG was found to enhance the splenocyte proliferation and macrophage phagocytosis, which was contrary to the previous report (Li et al., 2000). This disparities might owe to the lower dosage of 10 mg/kg used.

Further investigation will be carried out to isolate and elucidate the bioactive constituents of S. cuneata contributing to its remarkable anti-inflammatory and immunoregulatory activities, and to evaluate its potential as a possible anti-neurodegenerative agent based on inhibition of neuro-inflammation.

Authors have no conflict of interest.