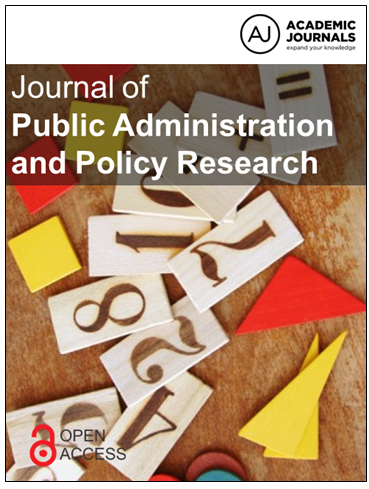 This study attempts to develop a pro-poor health care financing system for Eritrea. The study seeks to answer the following question: can the rich and healthy subsidize the poor and sick in Eritrea? This question is directly related to issues of social insurance and universal coverage. This study was conducted in 2016 in six months period from February to August. In this study, both primary and secondary data sources were used. Interviews were conducted with 35 key health officials and stakeholders. In this study, it is found that lack of purchasing power and financial resources; insufficient knowledge of health insurance schemes and high transaction costs; and lack of supply and information about care possibilities are the main problems for the development of a viable healthcare financing system in Eritrea. As the Ministry of Health is embarking on new pricing and cost recovery strategies, a closer look of its effects on consumers is required, particularly on the poor and vulnerable groups. Significant increases in revenues from user fees increases may not be realistic, given the country’s high poverty rate. The health care financing policy needs to be assessed in light of current and projected health sector needs.

Many countries in African are undergoing public service reforms. These reforms were initiated by the quest for efficient and effective public service provision influenced by structural adjustment programs and new public management movements of the 1980’s.
Most of the reforms involve restructuring of government institutions, the creation of new systems, procedures, and functions that are expected to promote efficiency and responsiveness. Similarly, the reforms in healthcare revolve around four health care provision and financing mechanisms (Table 1). These are: public provision and public financing (Cell 1); private financing and public provision (Cell 2); public financing and private provision (Cell 3); andprivate provision and private financing (Cell 4). 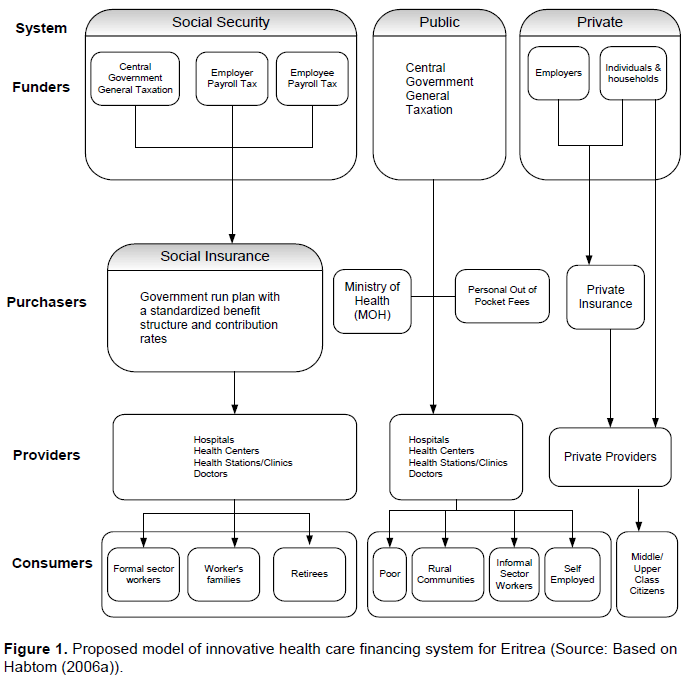 This study was conducted in 2016 during a six months period from February to August. In the data collection process, senior Public Administration students of the College of Business and Economics were involved. The students were advised to conduct research on health care financing in SSA with special emphasis on Eritrea, as part of their senior research project. In this study both survey and case study methodologies were used.
The case study and survey methods are not mutually exclusive; hence, one could have a case study within a survey or a survey complementing a case study (Hakim, 1987; Dancey and Reidy, 1999). The study adopted descriptive and explanatory case study methods in the analysis of health care financing in Eritrea.
The case study method has an advantage of using multiple sources and techniques in the data collection process, for example; documents, interviews and observations. Survey is the appropriate mode of enquiry for making inference about large groups of people based on the sample drawn, relatively small number of individuals, from that group (Marshal and Rossman, 1995). Further, surveys provide rapid and inexpensive means of determining facts about people’s  knowledge,  attitudes,  beliefs,  expectations,  behaviours,  etc.
Primary and secondary data were collected for the survey and case study design. Primary data was collected through interviews and observations. Interviews were conducted with 35 key government officials and development partners (10 MOH officials, 10 physicians, 5 officials from development partners (donors), and 10 local government officials). To check, the reliability of data and information gathering respondents were asked similar questions at different times.
Secondary data was collected from the archives of the MOH (documents, publications, and annual reports); reports of the World Bank, international monetary fund (IMF), WHO, United Nations Children's Fund (UNICEF), United Nations Development Programme (UNDP); and reports of Eritrea’s Demographic and Health Surveys.
Thus, the secondary data was collected from various sources inter alias relevant books and journals, international and national health reports, published and unpublished documents.This study is the first of its kind in Eritrea. So far there is no much research on health care financing in Eritrea and in most SSA countries country specific studies are lacking.
This study, therefore, fills the gap and paves the way for further research on health care financing in developing countries.

In Eritrea, health care services are mainly financed by the government. Social and private insurance systems are not developed in Eritrea. Underdevelopment of health insurance schemes constrains effective public-private mix in health care financing system in Eritrea.
Due to this in Eritrea, health spending overall, and public sector health spending, remains low by international standards. Most health facilities are reported to be experiencing a shortage of funds. The MOH should revise its cost recovery plans of 1996.
In the 1996 pricing policy, fees were designed to provide correct signals for the direction of the use of health care and health sector resources. One of the most commonly cited reasons for imposing user fees were to provide signals that discourage unwarranted use of services that have high cost but comparatively low benefits. However, in practice neither recurrent costs were sufficiently recovered nor patients were discouraged from bypassing primary level health care facilities. Several reports of the MOH indicated that the costs recovered through user fees are not more than 10% on the average. Reports of the MOH on bed occupancy rate showed also overcrowding in national referral hospitals, which is an indication of under utilization of lower level health care facilities.
To overcome the shortcomings of the 1996 health care financing policy, the MOH recently revised its health  care financing policy. A new health care financing policy was drafted in 1998, but it has not yet adopted because of the recent border war with Ethiopia. When the draft policy is ratified and becomes operational, the cost recovery of the recurrent expenditure is expected to increase by 40%.
Participation of communities in their own health care service is also expected to increase by 70%. In the proposed health care financing policy emergency cases for the first 24 h, hazardous and contagious disease, and patients with indigent certificates are entitled to get free medical care.
As the MOH is embarking on new pricing and cost recovery strategies, there is a need for a closer look of its effects on consumers, particularly on the poor and vulnerable groups. The health care financing policy should be  assessed in light of current and projected health sector needs, together with estimated financing sources and the expected roles of the government, external partners and the private sector, within the context of the country’s high poverty rate, in order to not to lead to a decrease in utilization of services by the poor.
Taking into account the current economic situation in Eritrea, the scope for increasing health fees be restricted to the higher income households. Significant increases in revenues from user fees increases may not be realistic, given the country’s high poverty rate. From a poverty-related perspective, the most worrying aspect of current healthcare financing system in SSA countries is the large share of out-of-pocket payments. Concerns about the negative impact of user fees on equity have been growing throughout the 1990s.
In Eritrea, ways to increase efficiency need to be explored, and priorities in interventions and services assessed and established. To this end, Eritrea should develop a healthcare financing system that can sustain and improve health service delivery to the whole population regardless of patients’ financial status. Hence, the GoSE should focus on:
1. Increasing healthcare financing system by mobilizing more resources into the sector.
2. Restructuring the National Health System in such away that it comprehends community based health insurance schemes to allow better coverage of the grass root population.
3. Developing mechanisms for financial protection, which ensures that all those who need health services are not denied access due to inability to pay and the livelihoods of households’ should not be endangered due to the costs of accessing health care. This indicates that there is a need for the separation of health care financing contributions or payments from service utilization, which requires some form of pre-payment (health insurance or government taxes).
4. Designing progressive healthcare financing system, where those with greater ability-to-pay contribute a higher proportion of their income than those with lower incomes.
5. Promoting cross-subsidies in the overall health system, that is, the healthy subsidizes the ill and the wealthy subsidizes the poor. To this end the government should reduce the fragmentation between and within individual financing mechanisms and develop a system to allow cross-subsidies across all financing mechanisms.
6. Developing a healthcare financing system that promotes universal access to health services. A system whereby all individuals are entitled to benefit from health services via existing financing mechanisms and value for money is guaranteed.