HIV and AIDS mainstreaming in the development arena has been a point of emphasis globally over the years. The higher education sector has also put emphasis on the campaign to have HIV and AIDS issues mainstreamed for in all strategies and operations. The purpose of this study is to investigate how HIV and AIDS mainstreaming has been considered in Uganda Management Institute (UMI) strategic direction. The study deployed a triangulation of cross-sectional and case study research designs where interview, Focus Group Discussions and Document review methods were deployed. The study deployed a two-level narrative analysis in order to identify patterns and plots with in participants’ stories and experiences. The study made reference to the model for mainstreaming HIV/AIDS in the education sector. The study found out that HIV and AIDS was scantily mainstreamed in UMI strategic plans and during monitoring. The mainstreaming for HIV and AIDS in the higher education sector was remodeled to capture the core mandate at UMI and to include the structures and systems relevant for the Institute. It was concluded that it is not enough to merely draw strategic plans, policies and other frameworks on HIV and AIDS initiatives, but more aspects like structures and resource allocation, among others have to be considered. The study recommends that a thorough analysis for HIV and AIDS issues, as well as mitigation measures should be properly addressed during strategic and annual planning processes to allow easy planning and budgeting, implementation and follow up of the issues.

A cross-sectional survey design was used in this research study because of its ability to study a given phenomenon at the same point in time. A case study design was also deployed because of its flexibility with an allowance of retaining holistic characters of real life events adopting an in depth investigation. The study employed mainly qualitative approaches in order to capture perceptions and stories on mainstreaming for HIV and AIDS in UMI’s development initiatives.  The target population under the study was staff members at UMI because they are the ones mainly targeted by the HIV and AIDS workplace policy unlike students who mainly pursue one-year courses. The study deployed face to face interview method and it involved the Directors, the Human Resource Manager, Deans, and Branch Managers. Focus Group Discussions were also held with participants including Cleaners, Askaris, Drivers, Office Assistants, Logistics Assistants, and Consultants. Document review method was also deployed to capture more data from the documents including the UMI strategic plan, the Monitoring and Evaluation System Guide, periodic reports, UMI policies, quality assurance reports and others.Validity of data was ensured by deploying a triangulation of methods, capturing data from different categories of people on the same phenomenon. This also allowed for trustworthiness – conformability, dependability, credibility and transferability of the findings.The study deployed narrative analysis where narratives were presented followed by analysis of narratives in order to identify patterns and plots with in participants’ stories and experiences. This allowed deriving meanings and understandings about mainstreaming for HIV and AIDS in UMI’s strategic direction. 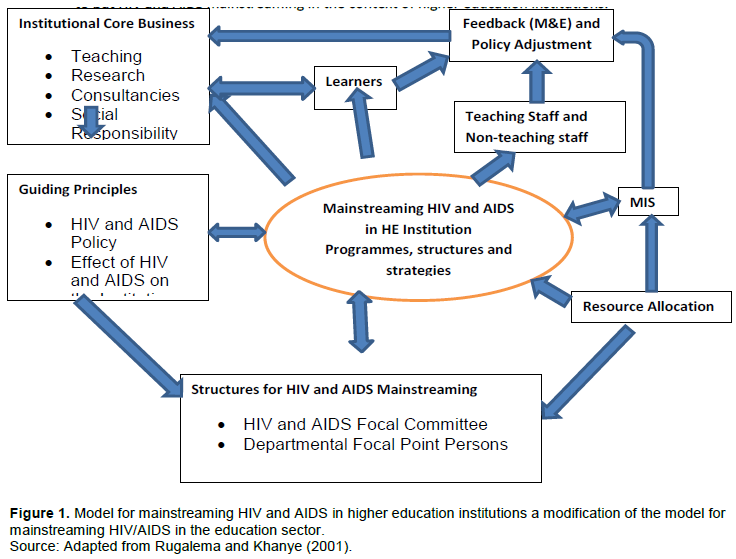 The study was one of the Institutional Intelligence Research studies that Uganda Management Institute is now promoting. Both authors being part of the staff structure of the Institute would utilize the publication for any career development opportunities where it may be required. However, this never derailed objectivity during the study. The authors therefore confirm that the findings present the objective picture of mainstreaming for HIV and AIDS in Institute strategic planning, implementation and during monitoring and evaluation activities.