Assessment of genetic variability, diversity, and identification of promising lines in linseed germplasm for harnessing genetic gain in central plain of the Indian subcontinent

Linseed (Linum usitatissimum L.), cultivated in more than 60 countries, is grown for fiber and oilseed worldwide. Here effort was made to assess the genetic variability in linseed germplasm and identify some promising lines used as parents in the linseed hybridization program. The study was designed with a total of 82 germplasm and a national check in RCBD for genetic variability for 11 agronomic traits. In this study, a considerable variation was observed for all the studied traits by using PCA analysis. It was also found that single plant yield, number of seeds per capsule, and number of capsules are ideal for linseed improvement through the selection in central India. Few high yielding accessions such as RL-10129 and Padmini showed maximum diversity with the popular variety T-397, and can be used in the hybridization program. Similarly, we identified a few potential accessions such as NDL-2013-03, EC-41741, Ruchi, EC-704, RL-10129 to be used as parents in the breeding program.

Linseed or flax, (2n=30 and genome size of ~370 Mb), is the only species of agricultural significance within the Linaceae family of 14 genera and 200 species (Wang et al., 2012; Diederichsen and Richards, 2003). This self-pollinated crop has been cultivated for centuries primarily for its  seed  oil  (linseed)  or  stem  fibers  (flax),  or  both (Zohary, 1999). Linseed provides raw materials for food, medicine, and textiles, and has been of great importance to human civilization and development for more than 8,000 years (Van and Bakker, 1975). Crop evolutionists consider linseed domestication to have existed in the old world,   including    the    modern-day    countries    Egypt,  Palestine, Israel, Iraq, Syria, Turkey, Iran, Lebanon, Cyprus, and Jordan (Fu, 2011) and then spread to Switzerland and Germany 5000 years ago in Europe (Barber, 1991). Evidence suggests that the crop was also grown in China and India, at least 5,000 years ago (Cullis, 2007).

Linseed oil is remarkable for its health benefits primarily attributed to its high content of dietary fiber (20-25%) and omega-3 alpha-linolenic acid (45-65%) (Green and Marshall, 1981; Rabetafika et al., 2011). Given its impressive drying properties, it is also a prerequisite for its use as an industrial product (Cullis, 2007). Nonetheless, flax fiber is used as a valuable raw material for textiles, threads, and wrapping materials, and its straw used to manufacture different forms of cigarette papers, currency notes, and the wooden component used as a biomass energy source (Rowland, 1998). To increase the linoleic acid content in eggs and meat, the various farms include linseed as animal feed (Simmons et al., 2011).

Globally, Kazakhstan, Canada, Russia, China, India, USA, Ethiopia, France, and the UK are the primary linseed cultivation and producing nations. Kazakhstan is the world's largest linseed producer (0.93 Mtonnes), followed by Canada, and India (0.17 Mtonnes) ranks 5th in the category (FAOSTAT, 2018). In India, under marginal and rainfed conditions, linseed is grown predominantly as an industrial oilseed crop covering an area of 0.32 million ha with a production of 0.174 million tons compared to 3.26 million ha worldwide which produces 3.182 tons. India's productivity is considered very poor at 543.8 kg/ha compared to the world average yield of 975.1 kg/ha and the average yields for the UK (1720 kg/ha), USA (1516.8 kg/ha), Canada (1497 kg/ha), China (1308.6 kg/ha), Kazakhstan (866.9 kg/ha), which are the top producers for this crop (FAOSTAT, 2018). This yield disparity may be due to low yield potential or lack of optimum agro-technological practices or a combination of both, and due to lack of availability of improved varieties in line with varied agro-climatic conditions (Singh et al., 2016).

The production of high-yielding varieties becomes the top priority to address the low yield levels; and improvement in any crop depends upon the accessibility of a wide range of genetic diversity. The development of a new variety depends primarily on selecting diverse populations with a broad genetic base. Identifying promising genotypes is very useful when breeding from initial parent lines to the final release of the variety. Modern linseed improvement has, however, lagged behind other oilseed crops, such as soybean and brassica oils.

The introduction of new germplasm is needed to broaden the genetic base and rejuvenate the breeding stocks.

Yield, a complex polygenic trait, is influenced by a large number of factors. The assessment of genetic variability for linseed accessions would constitute a better  resource and direction for better germplasm utilization in linseed genetic improvement.

The present study was, therefore, conducted to evaluate the variability present in the linseed germplasm for the central part of the Indian subcontinent and patterns of the interrelationship between different traits and important selection parameters.

The experimental materials consisted of a collection of 82 accessions of linseed for the present study. We laid the field experiment during the post rainy season of 2015-16 at Seed Breeding Farm, Department of Plant Breeding and Genetics, College of Agriculture, Jabalpur, M.P. India. All India Coordinated Research Project (AICRP) on linseed based at Regional Agricultural Research Station, Sagar, M.P., India, provided the seed materials for this study. We planned the experiment in Randomized Complete Block Design (RCBD) with 2 replications in 2.5 m long 2-row plot spaced 30 cm apart and plant to plant distance of 10 cm. All the recommended agronomic practices were strictly followed to raise a healthy crop. We collected the data on 11 agronomic traits, viz; days to flowering (DF), days to maturity (DM), plant height (PH), no. of primary branches (NPB), no. of secondary branches (NSB), no. of capsule per plant (NCP), no. of seed per capsule (NSC), 1000-seed weight (TSW), harvest index (HI), and seed yield per plant (SYP). Five competitive plants were selected randomly from each entry for recording observation.

For agronomic traits, best linear unbiased predictors (BLUPs) were obtained, and the range and mean were calculated based on BLUPs. In GenStat 15, phenotypic correlations were estimated for the determination of trait associations. Path analysis was performed to estimate the direct effect of the traits towards grain yield using R Version 3.5.3 (R Project for Statistical Computing, http://www.rproject.org/) (R Core Team, 2018). To avoid the multicollinearity issues, independent traits biological yield per plant (BM) was excluded while performing path analysis. Based on agronomic traits, the Euclidean dissimilarity matrix was constructed using the R package cluster (Patterson and Thompson, 1971); thereafter, the accessions were clustered following Ward's method. The most diverse accession pairs were identified based on the Euclidean distance matrix for potential use as parents in linseed crossing programs. 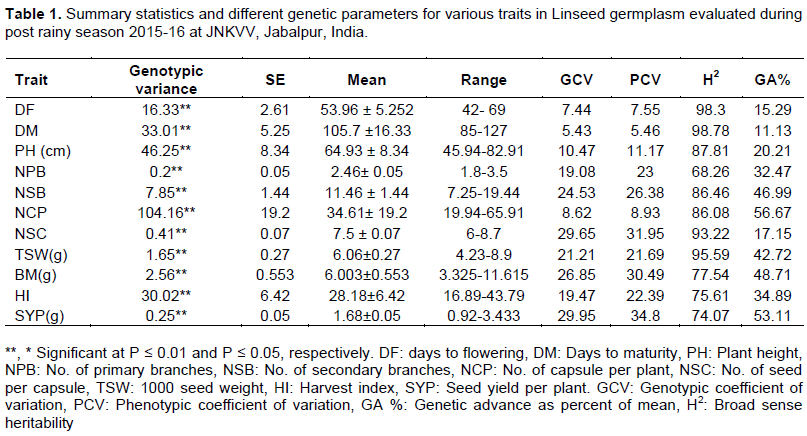 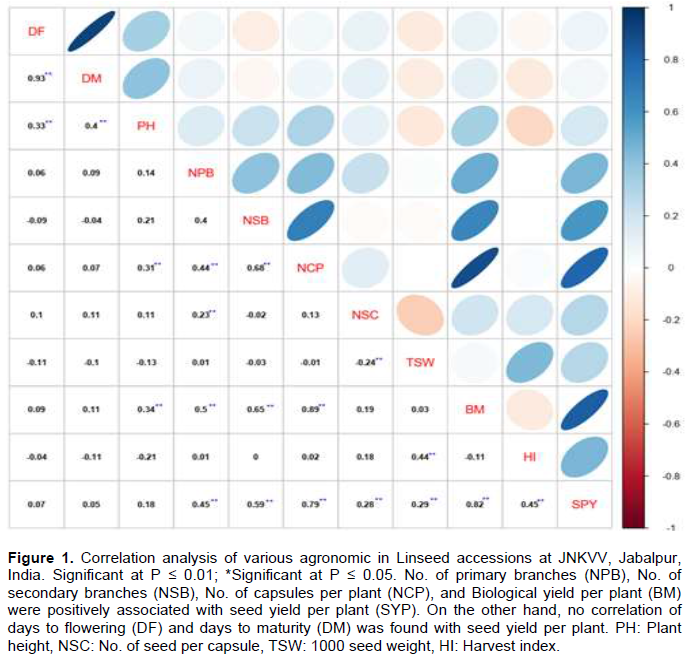 The principal component analysis was performed based on predicted means (BLUPs) for the quantitative traits of linseed. Out of 11, only four principal components (PCs) exhibited more than 1.00 eigenvalue and showed about 79% of the total phenotypic variability (Table 2). The PC1 had the highest variability (34.11%) followed by PC2 (20.39%), PC3 (14.01%) and PC4 (10.50%) for traits. The first two principal components accounted for (54.51%) of total phenotypic variability. The PC1 explained 34.11% for the first axis, and PC2 explained 20.39% for the second axis. SYP, BM, NCP, NSB, NPB, NSC were the main contributing traits in PC1. In contrast, PH, DM, and DF contributed to PC2 (Figure 2). 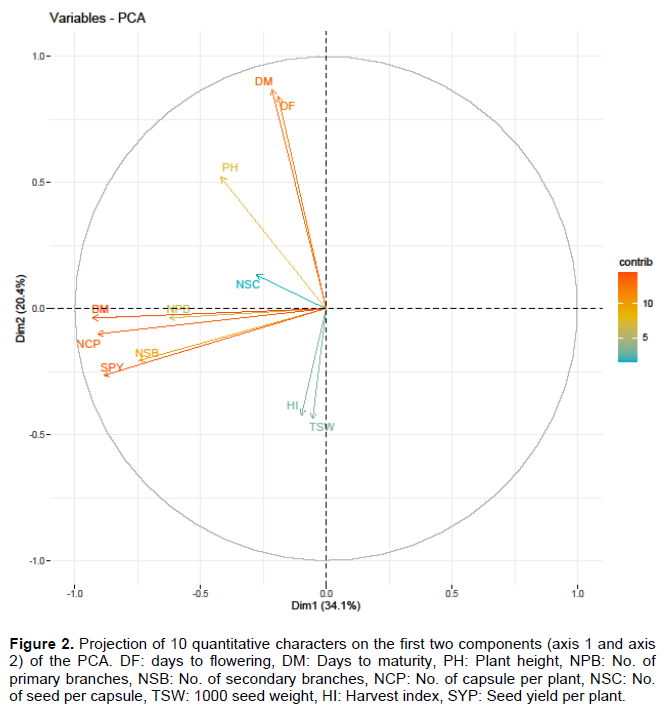 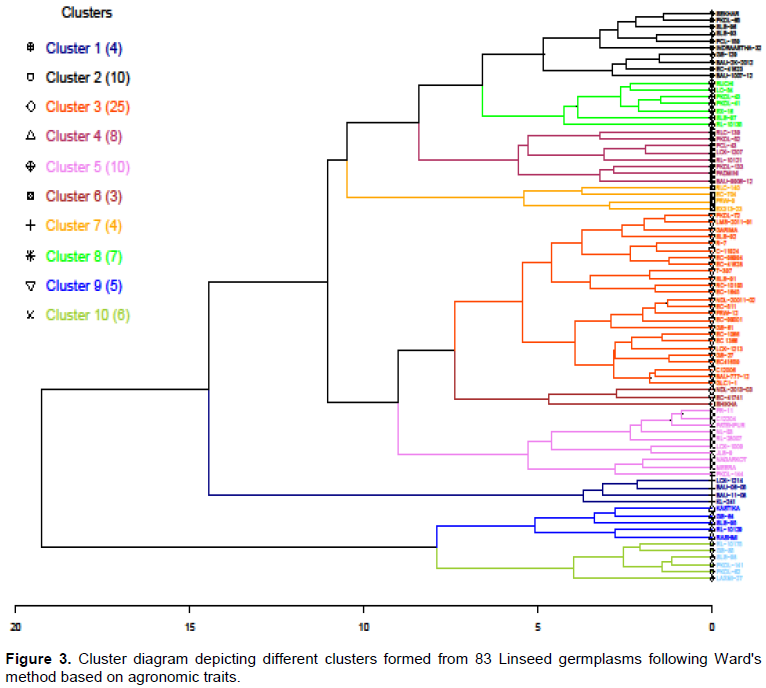 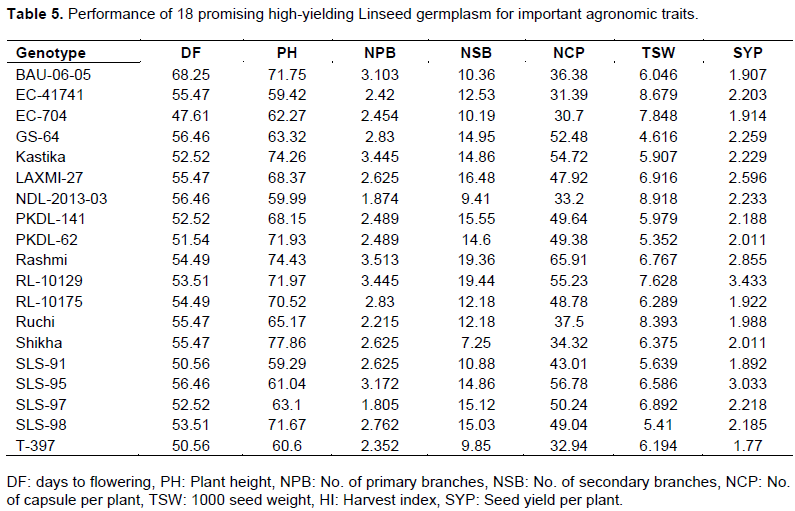 The linseed breeders can use traits such as NPB, NSB, NCP, NSC, TSW, and BM as an indirect selection criterion for enhancing grain yield as these showed a significant positive association with grain yield. Furthermore, independent improvement of the traits~ NSC and NCP is possible with no correlation between them (Pal et al., 2000; Chimurkar et al., 2001; Bhosle, 2002;  Naik  and  Satapathy,  2002;  Akbar  et   al.,  2003; Bhosle and Rao, 2005; Vardhan and Rao, 2006).Based on the cluster analysis, genotypes from Cluster V and Cluster VIII can be utilized in future hybrid programs for the highest grain yield as they had the highest mean value for the NSC and TSW. The utilization of germplasm and the source of genetic diversity occur periodically to meet the changing needs of improved crop varieties. Besides, there must be significant variation for economic traits in the germplasm for productive utilization following recombination breeding or selection. Optimal parental diversity is much needed to obtain superior genotypes to recover transgressive segregants (Griffing and Lindstrom, 1954; Moll et al., 1962). The genetic diversity of selected parents does not always rely on factors such as geographic diversity per place of release or degree of ploidy.

Therefore, the classification of germplasm for genetic divergence should be based on second statistical methods, such as D2 statistics and cluster analysis, to identify suitable and diverse genotypes. Cluster analysis categorize lines into distinct groups/clusters where genotypes in different clusters are more diverse than in a cluster (Ward, 1963) and are useful in selecting the most diverse genotypes to be used as parents in crossing programs. Besides, knowledge about the similarity/ dissimilarity between accessions and check cultivars is vital for the efficient use of the accessions in hybridization programs.

Including diverse accession in the hybridization, the program is very beneficial as this leads to new and useful recombinants used as variety. Based on yield and phenological traits, the cluster analysis grouped 82 lines into 10 clusters wherein similar accessions were in the same cluster.  Hence, this would make the selection process easy for the breeders to choose trait-specific and diverse accession for use in a breeding program. Apart from this, a few accessions such as RL-10129 and Padmini showing maximum diversity with the popular variety (T-397), have been identified for breeding programs to develop new cultivars.

To understand the potential of this germplasm in improving cultivated linseed, we compared the performance of these lines with the popular check variety T-397. In this study, apart from identifying 18 highly significant promising lines, we have observed many trait-specific significant lines. We identified many lines having early flowering, bold seeded, a higher number of primary branches as well as capsules per plant. Based on this, the breeder can select trait-specific significant lines and can be used in crop improvement breeding program as per the necessity. Besides, we found early flowering lines too, e.g., EX313-23, FRW-9, and RLC-140, which can be used in breeding programs for earliness trait. Similarly, we can use lines having a higher NCP for breeding promising lines in linseed. Remarkably, the high yielding and early flowering genotype EC-704 signifies there will be   no   yield  trade-offs   while  breeding  for  early  high-yielding lines from this selection.

This study on evaluation of linseed germplasms for variability and identification of promising lines revealed considerable genetic variation in the studied location. High genetic gain for this crop would be possible in this region with the improvement of traits such as single plant yield, number of capsules per plant, and seed per capsule. This study identified some lines, viz: NDL-2013-03, EC-41741, EC-704 and RL-10129 that have the potential to be used as parents in breeding programs and released as a variety (es) after evaluation across multi-location over the years. Also, utilizing those lines as parents in hybridization programs would diversify the current germplasm available. The high yielding lines should also be evaluated for its flax content and linoleic acid for further use in the breeding program.