Maize (Zea mays L.) is the second most widely cultivated crop grown by smallholder farmers under rainfed condition in Ethiopia. Maize yield in Ethiopia vary considerably across seasons and locations making smallholders livelihoods vulnerable to climate variability. Maize and common bean are two of the leading crops in their respective category of cereals and pulses in southern Ethiopia. Accordingly, maize and common bean occupy 36 and 44% of the area devoted to cereals and pulses, respectively (CSA, 2017).

Intercropping systems play an important role in subsistence and food production in developing countries (Tsubo and Walker, 2002). It is most  widely  practiced  in countries where arable land is scarce where it contributes to biodiversity and food security (Mushagalusa et al., 2008). Land scarcity is one of the constraints facing small farmers in Ethiopia. In the southern Ethiopia, 40% of farmers have an average land holding of 0.1 to 0.5 ha with a further 30% having 0.51 to 1 ha (CSA, 2017). This led farmers to use multiple cropping mainly intercropping to increase yield per unit area and reduce the risk from crop failure due to climate change.

The experiment was conducted under rain-fed condition at Hawassa research station (07°03Ëˆ71ÌŽ N, 38°30Ëˆ88 ÌŽ E, 1689 masl elevation) and on-farms (farm1; 07° 79Ëˆ43ÌŽ N, 37° 04Ëˆ 31ÌŽ E, 1696 masl elevation  and  farm2; 07° 78Ëˆ 28 ÌŽ N, 37° 04Ëˆ 31 ÌŽ E , 1692 masl ) in 2011 and 2012 main rainy seasons in Ethiopia. This area is characterized by bimodal rainfall between March and September with mean annual maximum and minimum temperatures of 27.3 and 12.6°C, respectively. Nine hybrid maize genotypes were planted in 2011 and 2012 cropping seasons. The hybrids were planted both under sole and inter cropping systems at research station in 2012. These genotypes were also planted only under sole-cropping on two farmers’ field in 2011 and 2012 without replication at each farmer’s field but for analysis farmers were used as replication. Similarly, in 2011, these genotypes were planted at research field without replication. For analysis of the data collected in 2011, farmers and research station were used as replication because the trial was not replicated both at farmers’ and research field. The recently released hybrid variety (BH-543) was included as check in 2011 and 2012 cropping seasons. The genotypes were planted using randomized complete block design with three replications at research field in 2012. Each genotype was planted on two rows 7.65 m2 area at research station and three rows 11.48 m2 area at farmers’ field. Maize genotypes were planted in 75 and 30 cm spacing between consecutive maize rows and plant, respectively. Common bean genotype named Hawassa-Dume was planted between two rows of maize in one to one ratio for intercropping. At research field, sole common bean was also planted for land equivalent ratio determination. Common bean was planted at the spacing of 40 cm between rows and 10 cm between seeds within a row. Grain yield and other important agronomic traits of component crops were recorded to evaluate the genotypes grown under the sole and inter-cropping systems. Plants from the whole plot were hand harvested at physiological maturity. Ears were shelled, grain weight and grain moisture content measured, and yield was adjusted for 12.5% grain moisture content. However, for common bean yield was adjusted to 10% grain moisture content. In both seasons, farmers were participated to set selection criteria and evaluate maize genotypes. Yield deviation due to inter cropping from the sole maize yield was calculated using the formula 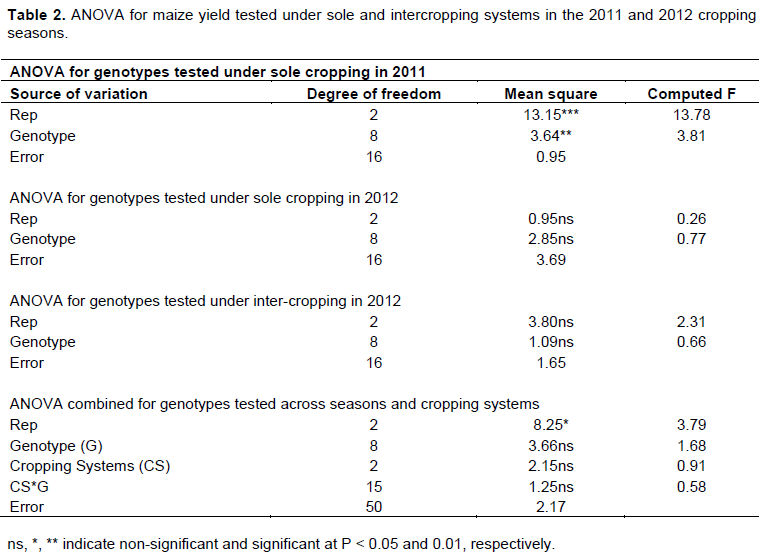 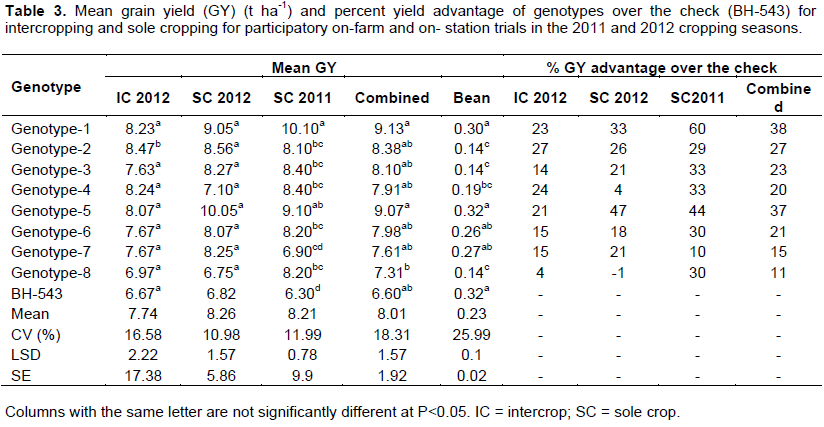 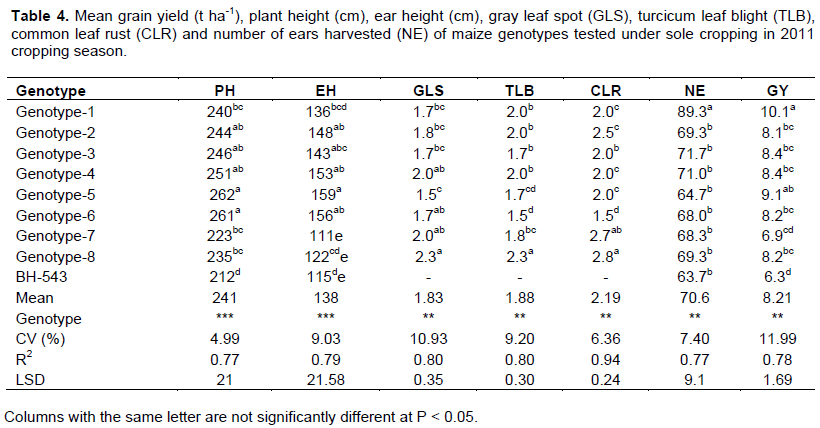 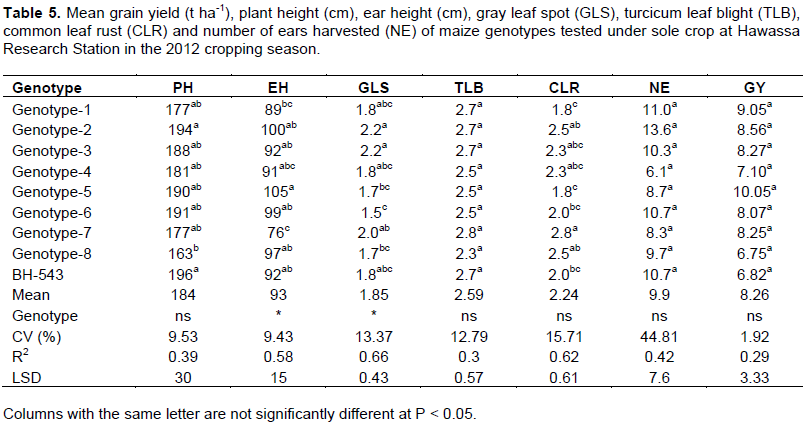 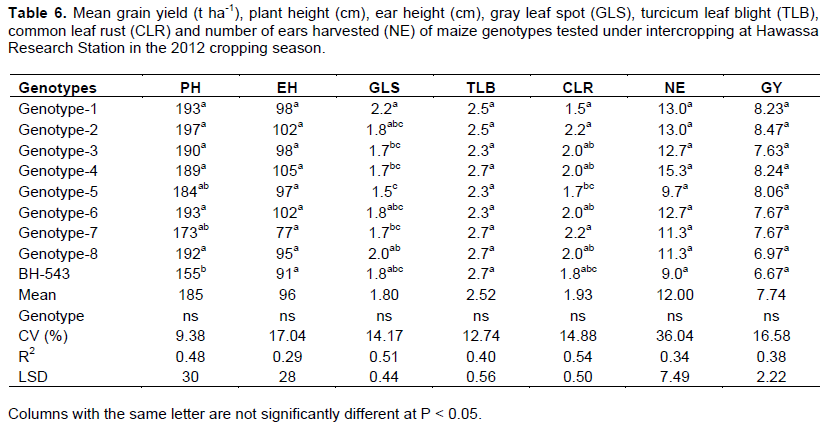 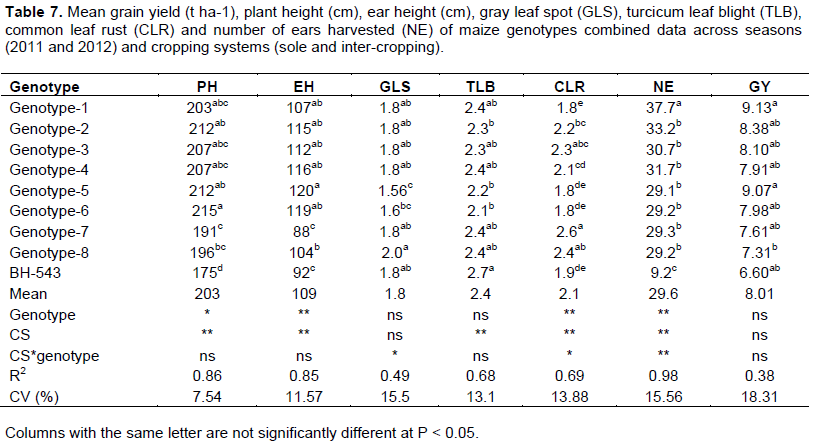 Mean performance of the genotypes

The overall LER was evaluated to derive land benefits associated with intercropping of maize genotypes and the bean variety Hawassa-Dume. The LER in intercrops ranged from 0.86 to 1.19. Only three genotypes, genotype-2, genotype-4, BH-543, and genotype-8 had LER of 1.02, 1.19, 1.04 and 1.06, respectively, which is greater than 1 (Table 8). The LER greater than 1 suggests that there is greater land area requirement for the monoculture system or greater relative yield for intercropping   of  maize  genotypes  with  common  bean variety Hawassa-Dume. For instance, LER of 1.19 observed for genotype-4 indicates that there is 19% requirement for the monocropping system or 19% greater relative yield for the intercropping of genotype-4 and Hawassa-Dume. Previous studies on maize common bean intercropping in Ethiopia reported high LER of intercropping system (Walelign, 2014; Tolera et al., 2005; Assefa et al., 2016) and with maize-soybean in Indonesia (Yuwariah et al., 2018). The LERs of intercrops between maize and common bean can save lands up to 48 and 55%, which would have required as additional land for monoculture of each crop (maize or common bean) if not intercropped (Nassary et al., 2019). However, most genotypes in this study had <1 LER indicating that the land productivity will be greater when genotypes are planted in monocropping than intercropping even if the difference was not that much high (Table 9). This is consistent with non-significant difference for cropping system x genotype interaction indicating that maize genotypes responded similarly for cropping systems (Table 7). This study highlights that varieties selected based on monocropping performance may not necessarily do well under intercropping system. 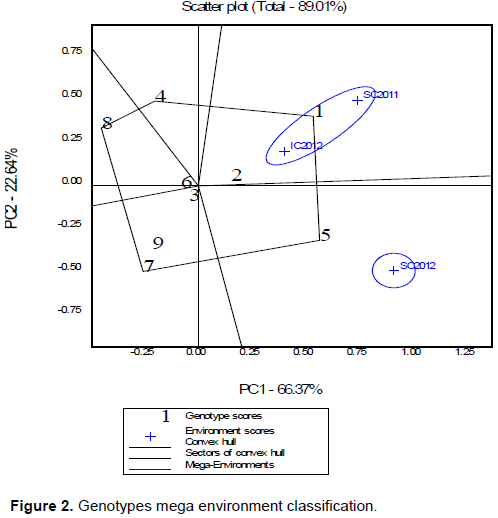 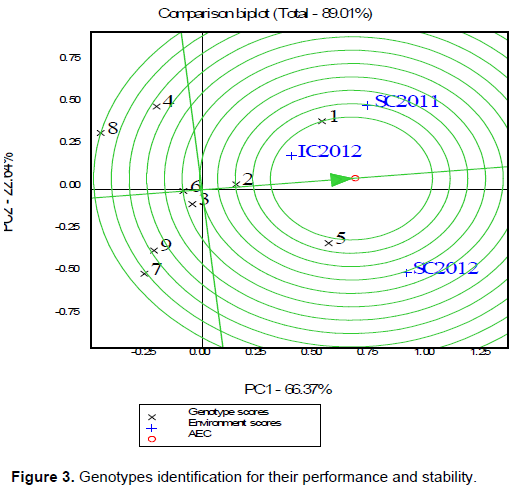 The results of this study showed significant variation among genotypes for yield and other traits. Genotypes used in this study were developed for monocropping system and hence most genotyes had lower LER indicating that they are not compatible to incropping system. However, genotype-4 and genotype-8 demonstrated higher compatability to the intercropping system providing an opportunity for famers to grow under both cropping systems. In regions with maize commonly grown as an intercrop, it is of paramount importance to evalate maize genotypes for their compatibilty to intercropping system at early stage of genotype evaluation. Some morphological traits such as canopy architecture and tolerance to high planting density could be considered for variatal selection. The results of this study highlights the need for particpatory varietal selection where farmers criteria could also be met for fast-track realease and better adoption of maize varieties.

This research was funded by Australian Centre for International Agricultural Research (ACIAR) through Sustainable Intensification of Maize-Legume Cropping Systems for Food Security in Eastern and Southern Africa (SIMLESA) project. They thank Mr. Zerihun Beshir, Mrs. Maedin Tadesse and other Hawassa maize team for their assistance in data collection.