Germplasm collection and morphological characterization of local accessions of tigernut (Cyperus esculentus L.) in Ghana for conservation and utilization

Tigernut (Cyperus esculentus L.) is a nutritious crop of the sedge family.  In Ghana available local accessions have not been collected and characterized for conservation and utilization purposes. The objective of this study was to collect, conserve and characterize twenty-four local accessions of tigernut in Ghana based on agro-morphological traits. The ANOVA revealed significant (p<0.05) differences among the accessions for all the traits studied except for hundred nut weight, indicating the presence of sufficient variability among the accessions.  The hierarchical cluster analysis put the accessions into six major groups confirming a wide range of diversity among the accessions. The biplot of the principal components analysis revealed the scattering of the accessions in all the quarters which further suggest a higher level of variability among the accessions studied. The PCA also revealed that the first five PC accounted for a total of 88.4% variability among the accessions. PC1 accounted for 45.6% of the total variation with an Eigenvalue of 6.84. The correlation analysis among the traits showed significant and positive correlation between number of nuts and good nuts (r=0.94) and detached nuts and attached nuts. However, there was significant negative correlation among nut width and detached nuts (r = - 0.88) and harvest index and biological yields (r = - 0.77). Based on the study, accessions TPY, CCB, BB, DY, ADL, KB, KAY, WY1 and BKB which recorded high values for number of nuts, good nuts, nut length, nut width and harvest index could be included in breeding programs for varietal development of tigernut in Ghana.

Tigernut belongs to the family Cyperaceae, and produces rhizomes from the base  and  tubers  that  are  somewhat spherical (Cortés et al., 2005). The plant is not really a nut but a  tuber  which  was  first  discovered  some  4000 years ago (Lowe et al., 2000). It has other names like yellow nutsedge, chufa, flat sedge, rush nut, water grass, earth almond, northern nut grass and nut grass (Shilenko et al., 1979). The tubers are very nutritious, typically, hundred grams of the nuts contain 386 kcal (1635 kj) of energy, 7% proteins, 26% fats (oils), 31% starch, 21% glucose and 26% fibre of which 14% is non-soluble and 12% soluble (Burden, 2003). It also contains vitamins A, B1, D2 and E, while the minerals include, Calcium, Magnesium, Sodium, Potassium, Copper, Iron and other beneficial enzymes (Burden, 2003). Tigernut is used as a source of food, medicine and perfumes (De Vries, 1991). It can be eaten raw, roasted, dried, baked or made into a refreshing beverage called Horchata De Chufas or tigernut milk which is very nutritive.

Medically, the nuts are reported to be aphrodisiac, carminative, diuretic, stimulant and tonic which can be used in the treatment of constipation, high blood pressure and diarrhoea (Oladele and Aina, 2007). Economically tigernuts provides Ghana with foreign exchange through its exportation. In 2010 Ghana exported 63,462 tonnes of tigernut valued at US$ 25,130.82 to countries such as England, Japan and America (GEPC, 2010). Its cultivation also provides jobs to about 85% of the youth and women in the major growing areas of Ghana (Tetteh and Ofori, 1998). In spite of the nutritional, medicinal and economic value of tigernut, the crop still remains an orphan.

Research into the production and general improvement of tigernut through breeding has received very little attention and farmers still cultivate landraces which are low yielding and susceptible to diseases and pest. Available accessions of tigernut in Ghana have not yet been collected, characterized and conserved. This further exposes available landraces to erosion of their genetic resources and limits breeding of improved varieties. Germplasm characterization plays an important role in varietal development of crops as genotypes with desirable traits are identified and utilized in the crop improvement programmes. Knowledge on the genetic diversity and variation among available accessions is very important for pragmatic use of plant genetic resources and also to determine evolutionary relationships (Zada et al., 2013). It will also aid in the early identification and exploitation of desirable traits such as high yield and early maturity. The existence of genetic variation among accessions can be employed as the basis for improving yield and other potentials of crop plants (Makinde and Ariyo, 2013).

Morphological attributes of crops have been employed as characterization tools among crops such as clusterbean (Manivannan et al., 2016), groundnut (Makinde and Ariyo, 2013), cowpea (Manggoel et al., 2012). Morphological traits has also been used to determine the extent of genetic variation among purple and yellow nut sedge accessions (Cruz and Baltazar, 2001, Peña-Fronteras et al., 2009, Okoli et al., 1997, Casimero et al., 1999). Before any effective work  can  be done on tigernut, there is the need to collect and characterize the local accessions that are available in Ghana. The objective of this study was to collect and characterize the accessions of tigernuts available in Ghana to promote their conservation and utilization.

The study was conducted at the multipurpose nursery of the College of Agriculture, University of Education, Winneba Mampong-Ashanti, during the minor season growing season.  Mampong-Ashanti lies within longitude 0°05ÊºW and 1°30ÊºW and latitude 6°55ÊºN and 7°30ÊºN and altitude 395 m above sea level. The area has an average annual rainfall of 1270 mm in two seasons (March and September) and a mean daily temperature of 27°C (Metrological Service, Mampong, 2010). 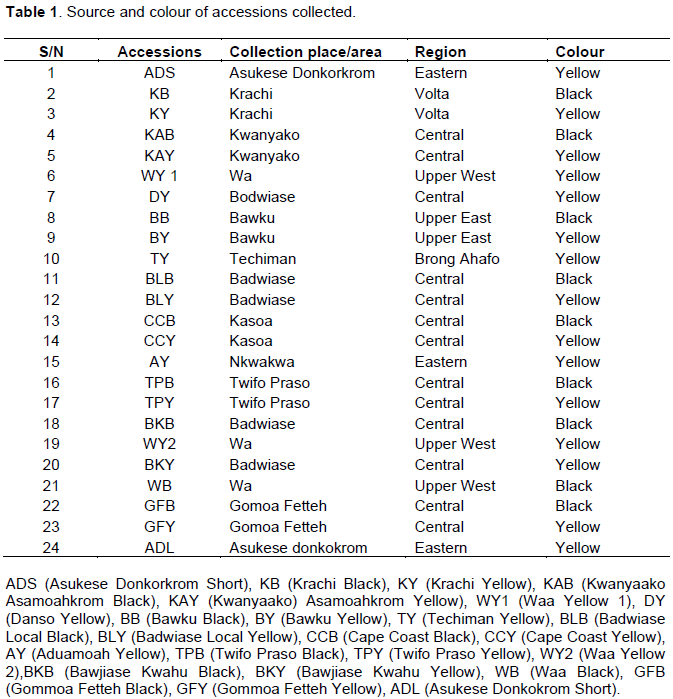 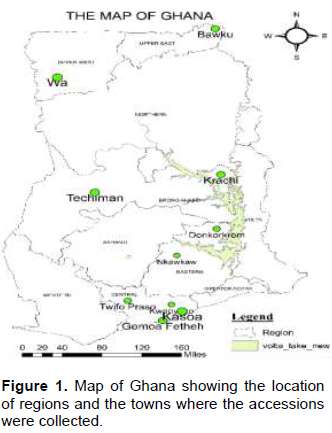 Dissimilarity matrix based on Euclidean distance was estimated using GenStat  11.1  version.  The  scores of the dissimilarity matrix were used to perform a hierarchical cluster analysis (Ward, 1963). Principal Component Analysis (PCA) based on the traits was performed to find out the relative contribution of the different traits to the total variation in tigernut.  A biplot was drawn to show the relationship between the accessions and the traits using the Eigen values associated with the components versus the number of the component.  Pearson (1901) Correlation coefficients was carried out for all the traits and a correlation matrix was prepared to understand the relationship among the different traits.

Variation in agronomic traits among the accessions 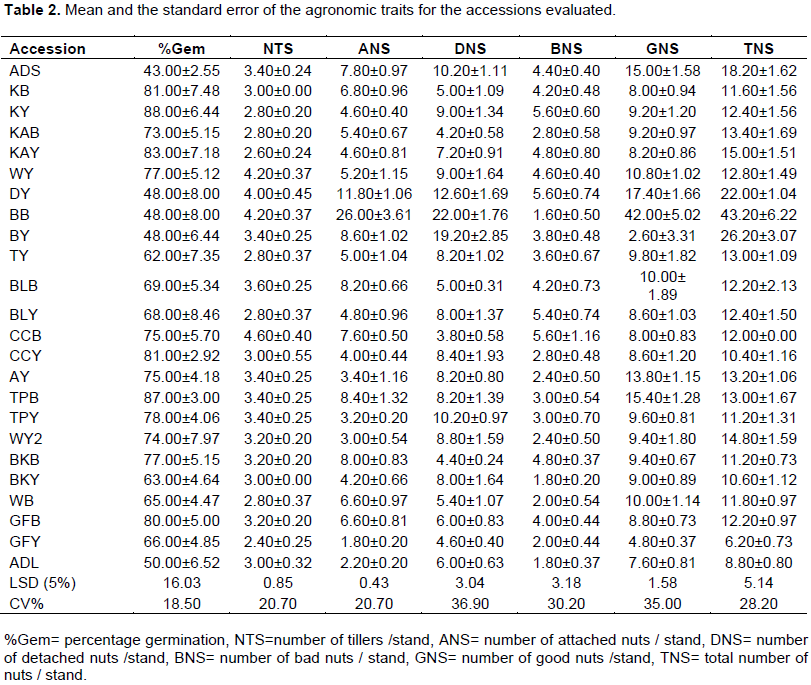 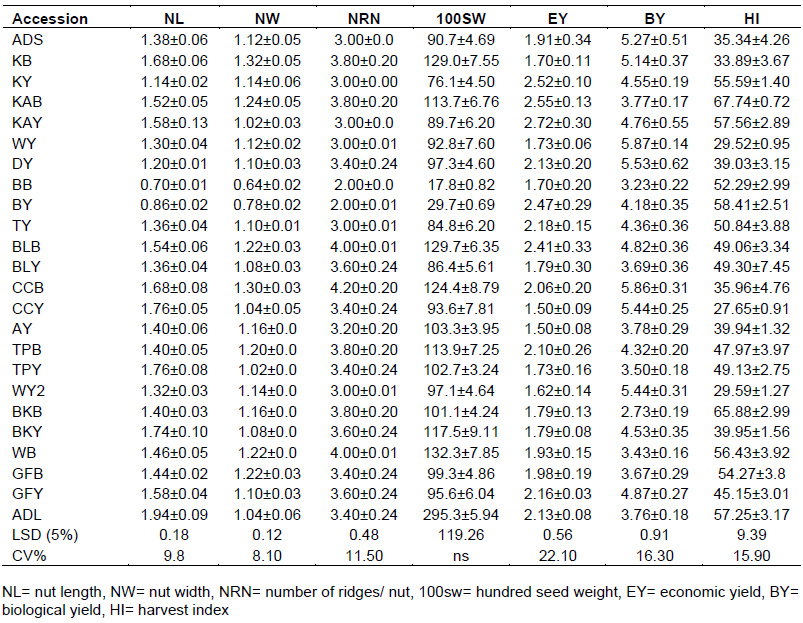 Cluster V and VI which contain one accession each had high harvest index, economic yield and long nuts. All the groups contained accessions of diverse geographical origin and colour.  Figure 4 shows variation in nut shape, size and colour clearly indicating the diversity among the accessions. 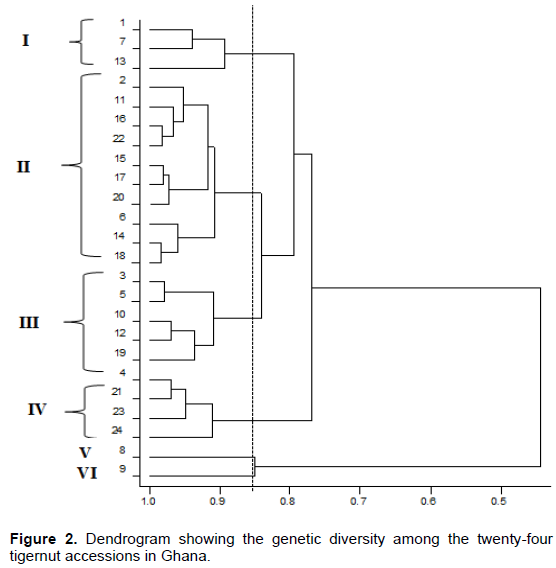 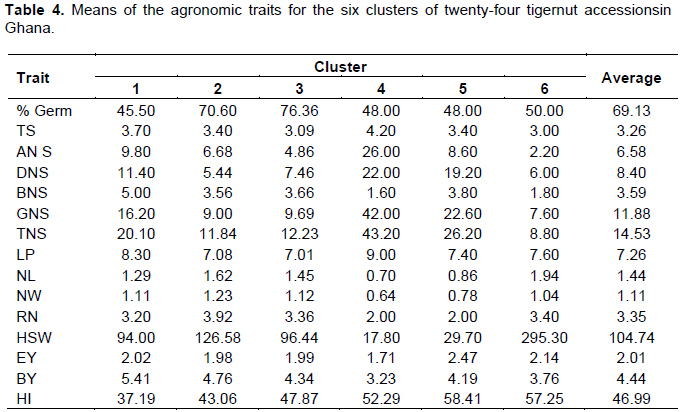 Variations among the traits were also assessed using principal  components  analysis  (PCA) for the twenty-four accessions. The first five PC accounted for a total of 88.4% variability among the accessions (Tables 5 and 6). PC1 recorded an eigenvalue of 6.8 which explained 45.6% of the entire variation with total number of nuts/stand, number of good nuts/stand and number of detached number of nuts/stand contributing greatly to the variation  for   this   PC.   PC2   explained   16.4%  of  the variation with the eigenvalue of 24.5. PC3, PC4 and PC5 explained 11.1, 8.3 and 7.0%, respectively of the total variation with eigenvalues of 1.66, 1.24 and 1.05, respectively. The biplot which separated the accessions based on PC1 and PC2 shows the accessions scattering in all the quarters and association between traits and accessions (Figure 3). Nuts width, number of ridges/nuts, Percentage germination, nut length and hundred nut weights were associated with accessions KB, GFY and ADL were grouped. Attached nuts/stand, good nuts/ stand, total numbers of nuts/stand and detached nuts/ stand were also associated with accessions BB, ADS and DY. 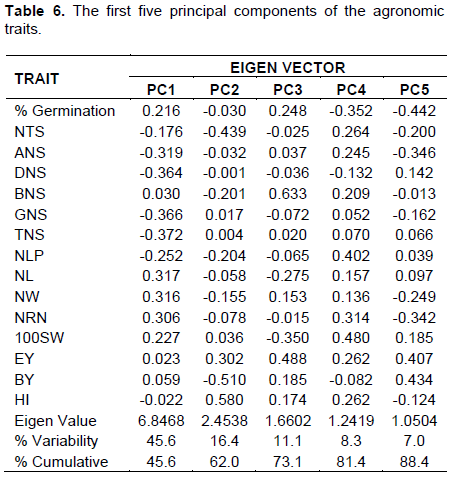 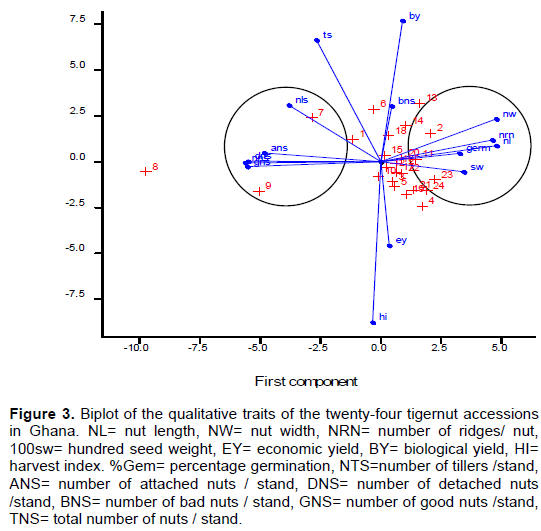 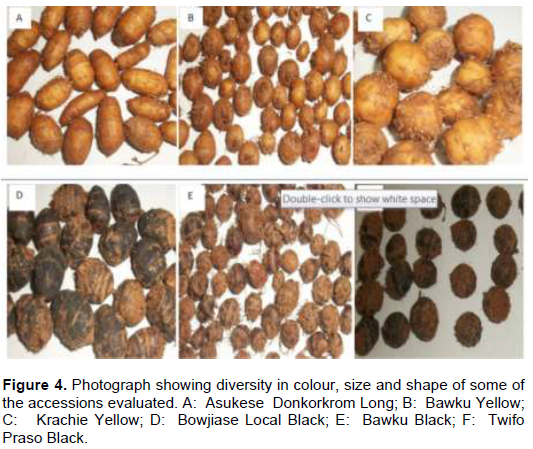 Correlation among the agronomic traits

The significance differences (<0.05) among the accessions for the agronomic traits is a sign of the presence of high degree of genetic variation. This provides the plant breeder the opportunity to select the best accession for utilization in future breeding programs. Accessions such as BB, ADL, BY and BKB which had high good nut/stand, total nuts/stand, economic yield and harvest index respectively could be included in breeding programmes for varietal development of tigernut. The observed variability could be attributed to the genetic differences among the accessions. Variation in morphological traits among yellow nut sedge and purple nut sedge biotypes has been reported by Tayyar et al. (2003), Bhowmik (1997) and Wills (1998) also reported considerable heterogeneity in morphological among Cyperus rutundus populations from around the world.

The biplot also shows relationship between the accessions and traits evaluated. The observation of the accessions in all the quarters of the biplot suggests a high level of genetic diversity in the accessions evaluated. Concentration should be on the traits that defined PC1 for varietal development of tigernut. Divergence among the purple nutsedge accessions for the morphological traits has been reported by Holt (1994) and Tayyar et al. (2003).

Correlation among traits provides information on the nature and level of association between two pairs of traits and it could be possible to improve a trait by the selection of the other pair. The correlation analysis shows significance association among the traits studied which suggest that they can be predicted by using the other. Therefore, traits that showed significance and positive correlation in this study could be improved simultaneously while those that showed negative association will have to be improved independently.

The study was conducted to characterized twenty- four tigernut accessions based on yield and yield related traits. The  data  shows that there exists  a wide range of diversity among the accessions for the traits studied. This should help provide necessary information for the breeding of improved tigernut varieties in Ghana. Promising accessions such as TPY, CCB, BB, DY, ADL, KAY, WY1 AND BKB which recorded high values for the yield and yield related traits should be included in breeding programmes for varietal development of tigernut in Ghana. Also the diverse forms of the accession studied should be conserved at the gene bank in Ghana.

The   authors  have  not  declared  any  conflict  of interests.