Efficacy of insecticides and crop critical stage for the management of chickpea pod borer (Helicoverpa armigera) in Central Zone of Tigray, Ethiopia

Chickpea pod borer (Helicoverpa armigera) is a major insect pest constraining chickpea production in Tigray, northern Ethiopia, as there is no recommended management option in the area. Therefore the present study was conducted to assess the efficacy of insecticides and to determine the critical growth stage of the crop for effective spray at Axum Agricultural Research Center. Results indicated that in laboratory profit 72% EC (profenofos), abema 3% EC (abamectin 20 g/L + emamectin benzoit 10 g/L), perfecto (imedachloprid + lambda-cyhalothrin) and hamectin (abamectin) reduced the number of larvae by 75, 55, 44 and 34%; 86, 82, 65, 56% and 83, 83, 66 and 83% at 24, 48 and 72 h after spray, respectively. Similarly abema 3%EC and profit (Profenofos) 72% EC were the most effective insecticides to give high mortality of pod borer on chickpea under field conditions. These insecticides reduced the number of larva per plant by 51 to 56.7% five days after spray. The number of damaged pods per plant was very low in both insecticides (0.91 and 1.05) but on the untreated check 3.05. The highest yield was also obtained from chickpea treated with abema 3%EC at podding stage (23.92 qt/ha). Comparatively the most effective insecticides against pod borer were abema and profit and the best application time were at podding stage of the crop. Thus chickpea growers in the area should prefer these insecticides for better pod borer management.

Chickpea (Cicer arietinum L.) is a legume crop of the Fabaceae family originated in present day South eastern Turkey and adjoining Syria (Sexena and Singh, 1987). It is the second most important food legume in the world after common bean. The major chickpea-producing countries are India (67.41%), Australia (6.21%), Pakistan (5.73%),   Turkey    (3.86%),    and     Myanmar    (3.74%) (FAOSTAT 2015). Ethiopia is considered as secondary center of genetic diversity for chickpea and the wild relative of cultivated chickpea (C. arietinum L.), is found in Tigray region (Yadeta and Geletu, 2002; Dagne et al., 2018). In Ethiopia the area coverage and the volume of production of chickpea in 2017/2018 are 242703.73 ha and  4994255.5 quintal  with  average productivity of 2.05 ton/ha. It contributes 15.18% of Ethiopia’s total pulse production and is second after fababeans (CSA, 2017/2018). It has the ability to grow on residual moisture which gives farmers the opportunity to engage in double cropping, since chickpea is sown at the end of rainy season.

Nutritionally chickpea contains 24% protein, 59.6% carbohydrates, and 3.2% minerals (Bakr et al., 2004). Its fiber reduces cholesterol and regulates blood sugar. Hence, it is an important crop as source of food and income commonly used as a green vegetable (Yasin, 2014). It is very important component of cropping systems which can fix up to 140 kg N per ha from air and meet most of its nitrogen requirement. It increases substantial amount of residual nitrogen for subsequent crops and adds some amount of organic matter to maintain and improve soil health and fertility. It saves the fertilizer input cost not only for chickpea but also for subsequent crops. Chickpea production is important for crop rotation with cereals such as wheat and tef which are widely grown in relatively well-drained black soils (Menale et al., 2009)

However, the production of chickpea is challenging because of different insect pests and diseases such as pod borers, cut worms, aphids, jassids, thrips, whitefly and the storage pests (bruchids) which are the most devastating pests of chickpea in Asia, Africa, and Australia. Among these gram pod borers H. armigera (Hubner) (Lepidoptera: Noctuidae) is a serious obstacle and a global concern for the production of chickpea.This pest is a cosmopolitan, multi-voltine and highly polyphagous, which attacks a number of crops which have agricultural importance throughout the world (Dabhi and Patel, 2007). Fitt (1989) recorded the crops of maize, sorghum, cotton, common bean, peas, chickpeas, tomatoes, capsicum, vicia and to a lesser extent, okras, cabbages, lettuces, strawberries, tobacco, sunflowers, and many of the other legumes as host plants of the pest. Pod borer is a key pest of chickpea causing 90-95% total damage (Sachan and Lal, 1994). It can cause damage up to 100% in unprotected chickpea fields (Tsedeke et al., 1982; Sarwar et al., 2009). A single H. armigera larva can damage up to 40 pods throughout its larval stage (Khan et al., 2009). The chickpea economic threshold is one pod borer larva per one meter row length (Zahid et al., 2008).

The experiment was conducted at Axum Agricultural Research Center (AxARC) in Laelay-mychew district which is 3 km east of Axum town. The study area is located at 13°15'40.2'' N latitude and 38°34'45.8''E longitude with an altitude of 2148 masl. It is located in northern part of the country, central zone of Tigray region in the semiarid tropical belt of Ethiopia with "weinadega" agro climatic zone. It is characterized by low and erratic rainfall with mean minimum and maximum range of 500 to 782.8 mm. The rainy season is mono modal concentrated in one season from July to September. The daily average minimum and maximum temperatures are 12.6 and 25.51°C, respectively. The soil type is classified as vertisol with a characteristic feature of clay soil type with pH 7.19.

The experiment was conducted both in field and laboratory in the same season. It was designed in a factorial randomized complete block design (RCBD) with three replications at field and CRD in the laboratory. Chickpea seed (Dalota variety) was used as planting material.The field was ploughed using oxen and harrowed manually to bring the soil to fine tilth. Fertilizer NPSZnB at the rate of 100 kg/ha was used during sowing date. The plot size was 3 × 3 m2. To manage the chemical drift among plots, spacing between reps and plots were 2 and 1.5m; spacing between rows and plants 30 and 10 cm, respectively. One liter capacity hand sprayer was used for each insecticide to manage the chemical mixtures. Each insecticide was sprayed twice at different growth stages of the crop. Spraying was done at wind free time of the day early in the morning up to 2 o'clock. The insecticides were applied at manufacturer rates. Cultivation, weeding and all recommended agronomic practices were performed accordingly (Table 1).

Number of pod borer larva, damaged pods and total pods per plant were collected from five randomly selected and tagged plants in each treatment. The yields were taken from the harvested net plot area excluding the borders. The infestation percentage was captured using the formula,

The data collected on the comparative efficacy of different insecticides against chickpea pod borer larva tested in laboratory and at field are presented in Tables 2 to 4. 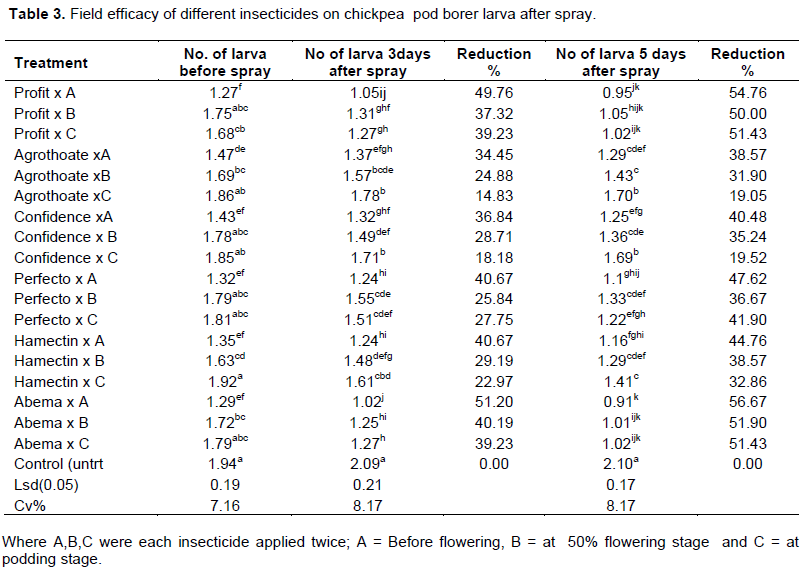 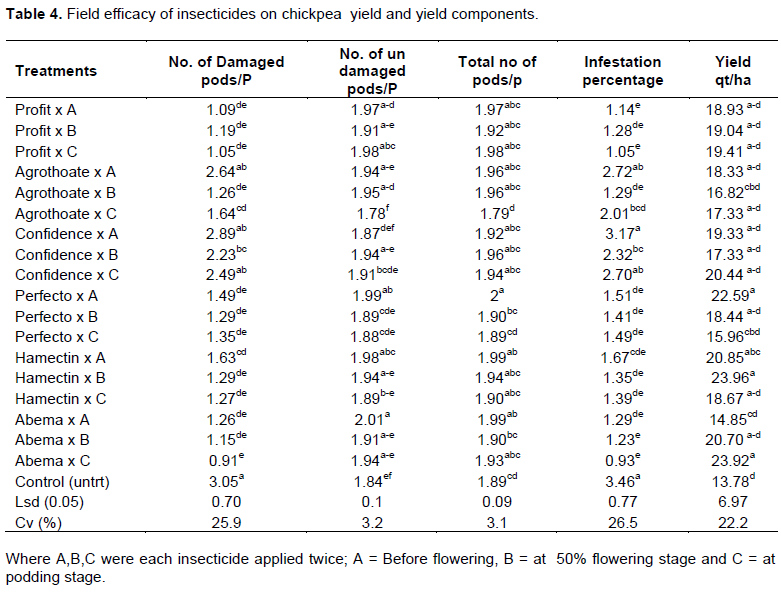 Efficacy of treatments on H. armigera larvae population in laboratory and field

The result showed that all treatments were significantly different (P<0.05) from the untreated control after treatment application in the laboratory. Profenofos and abema were effective in killing the larvae 24 h after spray. Moreover, effectiveness of these insecticides varied with time intervals; maximum effect was found after 72 h interval. Out of thirty 3rd-4th instar larvae only three alive larvae were observed on treatments with profenofos, abamectin 20 g/L+ emamectin benzoit 10 g/L and hamectin after 72 h of spray. However, the immediate killing action within 24 h was observed on profenofos and then abamectin 20g/L+emamectin benzoit 10 g/L which reduced the larva by 75 and 55% respectively. The highest reduction percentage up to 83% was observed 72 h after spraying with profenofos and abamectin 20 g/l+emamectin benzoit 10 g/L treated plots (Table 2).

In the field experiment insecticide treated plots were significantly different from the untreated control even though there was difference in effectiveness between insecticides. The number of larvae increased with the crop phenological growth. The highest larvae population was recorded at podding stage before treatment application. There was statistical difference in larvae population among treatments before insecticide application; before flowering, at 50% flowering and podding. The lowest number of larvae per plant was observed on the treated plots and the highest on the untreated plots. Three days after treatment application before flowering all insecticides were effective to reduce the larvae population; but after time intervals the insecticides lost their effectiveness and consequently the infestation increased again to damage the pods. However, these insecticides were also applied at 50% flowering and podding stages of the crop. Table 3 indicated that the lowest number of larva per plant (0.91, 0.95 and 1.2) was observed on abema (abamectin 20 g/L + emamectin benzoit 10 g/L) 3%EC, profenofos 72%EC and perfecto treated plots respectively at five days intervals applied  before  flowering.  Similarly,  at podding stage the number of larva per plant was 1.02 on abamectin 20 g/L+emamectin benzoit 10 g/L and profenofos treated plots. These insecticides reduced the larval population by 83% after five days of spray intervals at podding stage.

The current study was carried out to examine the effect of different insecticides against H. armigera on chickpea in laboratory and under field conditions. The result in the laboratory   showed   that   insecticide   treatments   were significantly effective on killing the H. armigera larvae. Profenofos, abema, perfecto and hamectin reduced the number of larvae by 75, 55, 44 and 34% after 24 h of spray; (86, 82, 65 an 56%) after 48 h and (83, 83, 66 and 83%) 72 h after spray, respectively. This result is in agreement with Iqbal et al. (2014) who studied the efficacy of emamectin 1.9 EC. (emamectin benzoate), lannate 40 SP. (methomyl), coragen 20 SP. (rynaxypyr), match 50 EC. (lufenuron), profenofos 50 EC. Profenofos tested against H.armigera on chickpea had the highest mortality of larvae in plots treated with profenofos (85%, 90% and 94%) and rynaxypyr (85, 90 and 92%) at 3, 5 and 7 days after treatment, respectively. The field efficacy of different treatments against H. armigera larvae was determined on the basis of number of larvae per plant. The data revealed that all the treatments were significantly superior to control. The lowest number of larvae per plant (0.91, 1.01, 1.02) and (0.95, 1.05, 1.02) was recorded on chickpea treated with abema (abamectin 20 g/L + emamectin benzoit 10 g/L) 3%EC and profenofos 72%EC before flowering, at 50% flowering and  podding stage of the crop five days after spray reduced the number of larva by (56.7, 51.9 and 51%) and (54.8, 50 and 51%), respectively; whereas the highest number of H. armigera larva per plant (2.10) was recorded   on   untreated   control.   The   present  results revealed with findings by Digne et al. (2018) who reported that the highest pod borer larval reduction (90.63%) was found in Diazenon sprayed plot followed by Karate 5% EC (71.87%) sprayed plot. Similarly, Khan et al. (2009) conducted a trial against gram pod borer and to assess comparative efficacy of insecticides (thiodan 40EC, lorsban 40EC, ripcord 10EC, nurell-D (chlorpyrifos + cypermethrin 50 + 500 g/L EC) and methomyl 45 WP). Methomyl was found most effective against the tested pest under field conditions.

The current study showed that all insecticides were effective to reduce the number of damaged pods per plant applied before flowering, at 50% flowering and podding stages of the crop, compared to the untreated check. But before flowering application insecticides lost their effectiveness and increased the pod damage. The lower damaged pods and infestation percentage were recorded on insecticides applied at podding stage of the crop. Abema (abamectin 20 g/L + emamectin benzoit 10 g/L) applied at podding stage gives the minimum damaged pods per plant (0.91) and lower infestation percentage (0.93%) with the highest yield (23.9 qt/ha). Savita and Pandurang (2014) reported that the lowest number of surviving population of larvae 0.70 larvae/plant, highest yield recorded 15.00 q/ha, lower pod damage 8.10% were recorded on chickpea treated with rynaxypyr 20 SC at 40 g/ha.

The experiment was conducted to assess the efficacy of insecticides against H. armigera on chickpea and to determine the critical growth stage of the crop for spray. From the present research study, it was concluded that approaches for chemical management of H. armigera were found effective. Spraying insecticides at podding stage of the crop were important. The result revealed that abema 3% EC (abamectin 20 g/L + emamectin benzoit 10 g/L) and profit (Profenofos) 72% EC were the most effective insecticides to give high mortality of pod borer on chickpea under field conditions. These insecticides were highly effective in reducing the number of larva, damaged pods and infestation percentage per plant. The highest yield was also obtained from chickpea treated with abema (abamectin 20 g/L + emamectin benzoit 10 g/L) 3%EC at podding stage.