The drilling operation cost represents 25% of the total oilfield exploitation cost. Drilling fluids represent 15 to 18% of the total cost of well petroleum drilling operations. The main drilling fluids problem is the loss into fractures and vugs. Mitigation of severe lost circulation is a main challenge while drilling in fractured formations where conventional lost circulation materials (LCM) will not cure these losses. Therefore, specialized fracture seal material (FSM) is required when drilling fractured formations. In this study, a promising FSM made from shredded waste car tyres was tested at laboratory for its ability to seal artificially fractured cores under High Temperature High Pressure (HT-HP) conditions similar to wellbore conditions. For this purpose, the conventional 500 ml HT-HP filtration cell was modified to accommodate a fractured core plug of length and diameter equal to 38.1 mm (1.5 inch) instead of the ceramic disc. Moreover, the cell outlet channel located below the fractured plug was increased from 1.0 mm diameter to 5.0 mm, easily allow the passage of the FSM in none effective fracture seal tests. Using the modified HT-HP filtration cell, shredded waste car tyres proved its ability to perfectly seal the artificially made fracture in the test core samples at overbalance pressures up to 900 psi and temperatures up to 80°C. The optimum mud composition was fresh water, 7% by weight bentonite, 7% shredded waste car tyres (a mixture ranging between 2.3 mm and less than 0.45 mm granule sizes) in weight bases. In addition to its great ability to seal fractured formation, the shredded waste car tyres material is cheap and locally available in commercially quantities. Additionally, the utilization of waste car tyres in drilling operations and other industrial applications can protect the environment from many hazards.

Filtration or fluid loss is a relative measure of the liquid that could invade a permeable formation through deposited mud solids (Figure 1). This liquid is called filtrate and the deposited solids are called filter cake or mud cake. There are two standard filtration tests that measure the volume of filtrate collected after a 30-min
period of time using filter paper. These tests are low-temperature/low-pressure fluid loss test, often called the American Petroleum Institute (API) test, and the high-temperature high-pressure (HTHP) test. Routine drilling fluids filtration measurements are performed on a filter paper using either the API filter press (100 psi and 25°C) or HT-HP filter press (175 ml or 500 ml). Additionally, HT-HP filtration can be performed on a ceramic disc. Filter papers or ceramic discs are normally used to simulate mud filtration through rock matrix in non-fractured formations (Figure 2). 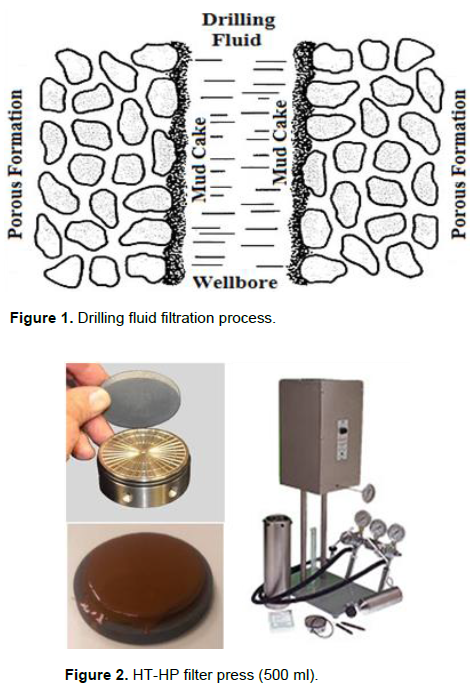 This study is aimed to find a promising fracture seal material for use in oil and gas wells drilling operations. There are numerous materials available in the market for fracture seal applications. However; the utilization of shredded waste car tyres has many advantages such as reducing environmental hazards. A large pile of discarded tyres can quickly turn into a dangerous fire that is difficult to extinguish, causing extraordinary air pollution.
(2)          Modifying of the standard API HT-HP filtration apparatus (Figure 2) normally used the ceramic disk for fracture seal tests applications. This standard testing apparatus is designed to measure the filtration of drilling fluids through a manufactured ceramic disc. The outlet valve is designed to only allow mud filtrate and very fine particles (clay size) to flow. In this work, this apparatus was modified to accommodate an artificially fractured rock disc as shown in Figure 4. 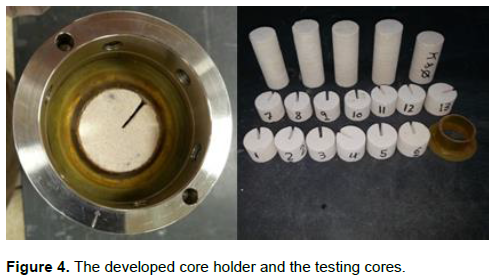 Furthermore, the outlet of the cell was increased to allow flow of fluid with large particles in case of non-perfect seal of the fracture in the test rock disc, to avoid false results if the original valve is used. Figure 5, shows a schematic sketch of the modified core holder cap. 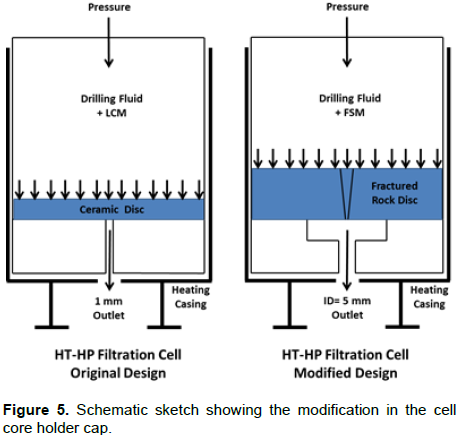 (3)           Developing a new method for artificial fracture generation in rock cores (plugs), is to replace the stainless slotted disc where the filtration process was impossible. To simulate natural fractured rocks, core plugs of 38.1 mm diameter and 38.1 mm thickness were cored from an artificial sandstone blocks. The properties of this sandstone are shown in Table 1. 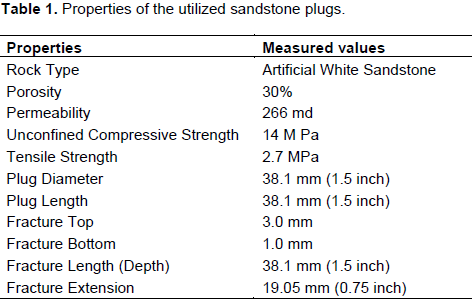 After coring and trimming to the required dimensions, a single fracture was performed in each core with an opening (top) size of 3.0 mm until half way of the core length, then, there was a tip (bottom) size of 1.0 mm along the remaining thickness up to the bottom of the core.The performed facture extends from the core circumference to the core center (that is fracture extension is equal to the core radius) as shown in Figure 6. The advantage of this artificially fractured core among the stainless steel slotted disc is that, both LCM (bentonite) in the base mud as well as FSM additive (shredded car tyres) contribute to the developed seal in the fractured and non-fractured parts of the core plug. 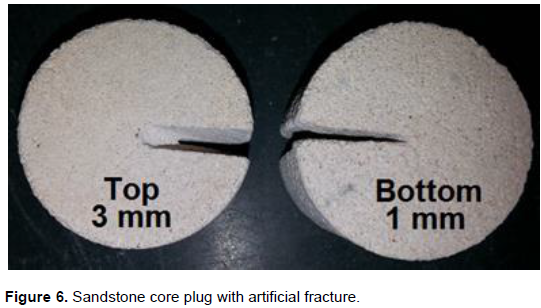 FSM preparation
The preparation of FSM from the waste car tyres was performed by
applying the following steps:
(1) Waste care tyres are shredded into small cubes, suitable for use in the grinding machine (Figure 7).
(2) The rubber cubes are placed in liquid nitrogen to freeze it and make it possible for crushing into granules using the crushing machine.
(3) After crushing, steel wires are removed out using large bar magnet, and the result is pure rubber pieces (Figure 7).
(4) Sieving analysis is performed to identify the required rubber granules suitable for the designed fracture size (Figure 8). 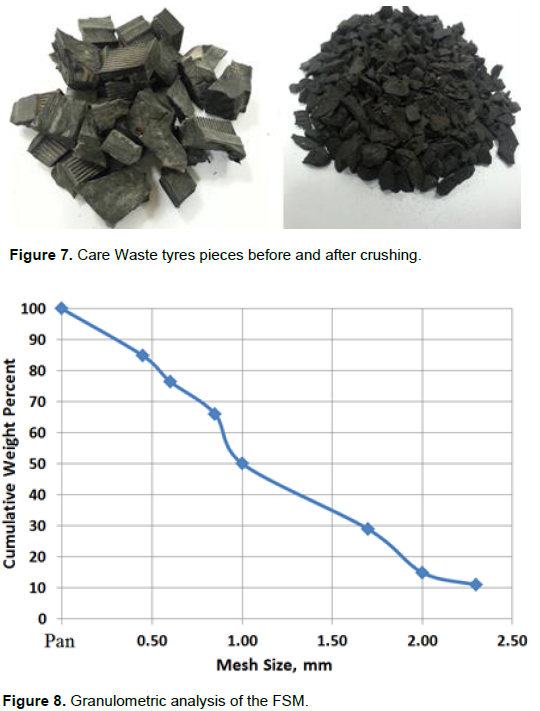 Fracture seal tests
As mentioned in section 2,there is no standard API for fractureseal tests. The following testing procedure was precisely followed during testing the FSM, made from waste car tyres:
1) Prepare the required mud (500 ml) by mixing 7% of weight bentonite and the required FSM (a mixture ranging between 2.3 mm and less than 0.45 mm granule sizes) is place in fresh water using mud mixer for 10 min (Rheological properties for base mud and base mud with FSM are shown in Table 2).
2) Perfectly fit the test core plug into the rubber sleeve using temperature resistant adhesive tap where the fracture opening is facing the drilling fluid side as shown in Figure 9.
3) Pour the mixed mud into the 500 ml capacity HT-HP filter, press cell and place the sleeve over the O-ring then fit the cell cover and firmly tight the six screws.
4) Place the cell up-side-down in the heating casing and wait until it reaches the required temperature (80°C).
5) Open the nitrogen cylinder valve to apply the required pressure difference on the top of the mud.
6) Open the bottom valve at atmospheric pressure (DP=200 psi) and record spurt volume as well as filtrate volume with time.
7) Increase the inlet pressure gradually up to 900 psi to examine the fracture seal integrity (resistance to pressures between 200 psi and 900 psi).
8) At the end of the test, leave the cell to cool to laboratory temperature, then release the cell pressure and extract the core plug for inspection.
The experimental design (mud composition and FSM type and concentration, temperature, pressure difference, and experiments replication) is used for the verification of the potential use of FSM to seal fractured formations while drilling. 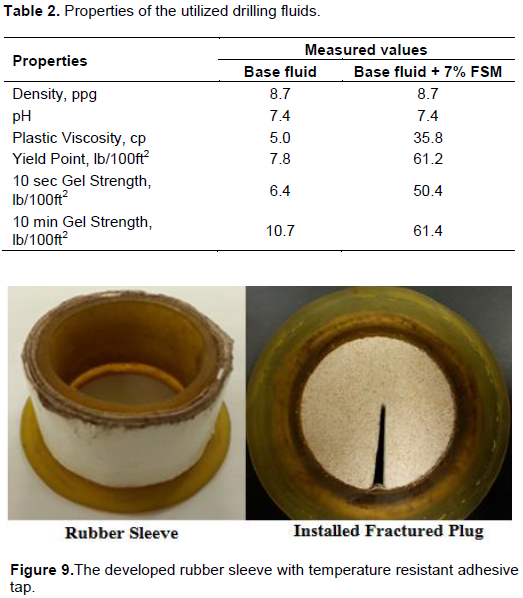 In the first experiment, a base drilling fluid (fresh water + 7% bentonite by weight) without LCM or FSM was tested for its potential ability for fracture sealing at pressure difference of 200 psi and 21°C (laboratory temperature). The result was a complete loss of the mud outside the cell through the fracture within1 min. The inspection of the core plug after the test showed that a mud cake has formed and sealed only the core matrix while the fracture is remaining completely open as shown in Figure 10.This result indicated the need for FSM to seal (completely close) the fracture in the test core sample. 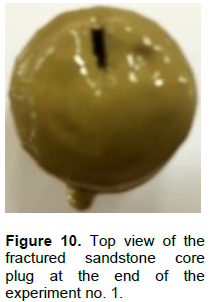 In the second experiment, 7% FSM made from the shredded waste car tyres is added to the mud based drilling fluid. The result was a perfect seal (zero filtrate loss) after 5 min with a 20cc spurt and 5cc filtration loss under 200 psi pressure drops at 80°C (Figure 11). After the development of the complete seal at 200 psi, the pressure drop was gradually increased up to a maximum value of 900 psi to check the integrity (stability at high pressure) of the already developed seal. The result was a full success (zero filtrate loss). 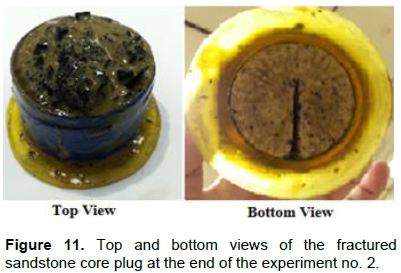 It is worth to say that this FSM has an important property among other solid FSM which is elasticity. Due to rubber elasticity, the FSM is able to enter the facture and move forward until the narrowest part of the fracture is driven by the mud pressure.
Therefore, the optimum mud (fresh water + 7% bentonite + 7% FSM made from shredded waste car tyres in weight bases) used in this study, proved its ability to seal the tested fracture perfectly up to 900 psi pressure difference at 80°C.

Based on the analysis performed in this study, the following conclusions can be made:
(1) The HT-HP 500 ml filter press has been modified to accommodate real core sample of 38.1 mm diameter and 38.1 mm length with an artificially made fracture. Furthermore, the cell outlet diameter was increased to allow the passage of the used FSM in case of none sealed fracture.
(2) An optimum mud (fresh water + 7% bentonite + 7% FSM made from a mixture of shredded waste car tyres in weight bases ranging between 2.3 mm and less than 0.45 mm granule sizes) perfectly sealed an artificial fracture of 3 and 1 mm top and bottom, respectively made in a sandstone core sample of 38.1 mm diameter and 38.1 length.
(3) FSM made from shredded waste car tyres proved its great ability to seal the tested fractured core plugs at temperatures and pressures up to 80°C and 900 psi, respectively.