Waterflooding has become by far the most widely applied method for enhanced oil recovery, accounting for more than half of oil production worldwide. Changes in the wettability of a porous medium and the chemical composition of the wetting fluid result to changes in oil recovery. In recent time, pore-network modeling has been used increasingly to study the effect of wettability on waterflood oil recovery and multiphase flow properties in different types of petroleum reservoirs. Starting from single pore models of fluid arrangements, computations of relative permeability, interfacial area, mass dissolution rate and many other physical properties have been made. Using realistic representations of the pore spaces of various rock systems, it is now possible to predict many petro-physical properties that govern fluid flow and transport in petroleum reservoir rock systems. Such properties include porosity, permeability, waterflood relative permeability, capillary pressure, phase saturations, and fluid transfer coefficients. This review looks briefly into some of the successes made so far on pore network modeling, with an emphasis on models of wettability trends and oil recovery by waterflooding.

The world is facing challenges in increasing oil and gas supply rapidly enough to sustain growth in energy demand and the economy. Growth in global population and industrialization in developing countries will result to increase in global energy consumption and hence further pressure on the available oil resources. Oil producing companies are encountering increasing difficulties and challenges in accessing new conventional reserves and are therefore turning to more complex developments, like the deep and ultra-deep offshore,  to  deliver  growth  and boost oil and gas production. However, even the huge oil and gas reservoirs discovered in deep and ultra-deep offshore will only yield about 30% recovery by primary reservoir energy. This still leaves with us the problem of recovery of a greater percentage of what is left behind. Waterflooding is by far the most widely applied method of improved oil recovery over the years, with good results in conventional and unconventional (tight oil) as well as shale gas reservoirs (Craft and Hawkins, 1991). Waterflooding,   when   properly   applied,   can   increase
production from conventional oil reservoirs by 25 to 45% of the oil originally in place (OOIP) depending on the reservoir fluid and rock properties (Meshioye et al., 2010; Klug-Santner, 2017). By implementing waterfloods, we can lower the declines in most declining oil fields and increase reserves.
Wettability is known to be a major factor influencing oil recovery by waterflooding. It determines the microscopic distribution of fluids in the pore-space which, in turn, determine important multiphase properties such as capillary pressure, relative permeability, residual saturation and resistivity index (Karabakal and Bagci, 2004; Ju and Fan, 2012). Crude oil/water/rock interactions leading to wettability variations can result to large variations in the displacement efficiency of waterfloods. However, wettability in real porous systems remains a poorly understood phenomenon as it is very difficult to measure and characterize. Commonly used single global measures such as the Amott-Harvey and USBM indices (WI) are clearly limited in their ability to describe the rich variety of multi-phase behaviour observed in real reservoir systems (Anderson, 1987a,b; Morrow and Mason, 2001). Hydrocarbon reservoir pore spaces have different orientations and complex geometries (Bear, 1953) and these, combined with complexities in rock-fluid and fluid-fluid interactions, reduce descriptions of wettability to highly simplified model systems, limiting its understanding in real porous systems. Accurate assessment of wetting characteristics of a rock-ﬂuid system is an important aspect that requires consideration before conducting ﬂow experiments. Consideration should be given to the fact that wettability of a given rock sample may change after a series of experiments. Changes in rock structure and adsorbed chemicals on the rock surfaces can also cause changes to the system wettability. Therefore, quantitative and qualitative tests have to be performed after a series of each flow experiments to increase accuracy of results.
A better understanding of wettability and its effect on waterflood oil recovery and multiphase rock and fluid flow  properties requires detailed knowledge of the pore-network distribution of fluids. Understanding of multi-phase flow and transport is generally limited by lack of information about the microstructure of porous media and the associated flow processes. Most of the studies in literature have been focused on less complicated rock-ﬂuid systems. While less complexity may be necessary for developing better understanding of the fundamentals of transport and fluid flow, the resulting data may not be able to capture all the complexities needed to fully characterize the reservoir under consideration. Also, the impacts of the rock surfaces and fluid spreading characteristics on wettability trend in a given rock system has not received sufficient attention, despite their importance. Wettability in real porous systems is very difficult to measure and characterize and remains a poorly understood phenomenon. Commonly  used  single global measurement methods (Amott-Harvey and USBM indices) tend to be limited in their ability to describe accurately, the complex multiphase behaviour observed in real reservoir systems.
Complexity of the pore geometry has led to the development of many experimental, theoretical, analytical and numerical methods for studying transport and fluid flow processes in porous media (Sallès et al., 1993; Liou, 2005; Wang et al., 2016; Meakin et al., 2007; Chatzis and Dullien, 2009; Sun et al., 2012a; Raeini et al., 2012; Karadimitriou and Hassanizadeh, 2012; Miyan and Pant, 2015; Andrew et al., 2015; Noetinger et al., 2016). Measurement techniques involving the use of X-ray and neutron scattering, scanning electron microscopy (SEM), transmission electron microscopy (TEM), focused ion beam milling (FIBM), QEMSCAN imaging, nuclear magnetic resonance (NMR) and others are usually expensive and time consuming, with accuracy of obtained data limited by sample preparation methods, experimental setup, conditions and procedures. Thus, different methods of pore structure characterization may likely yield different results for the same rock sample. Again, there is also the problem of over-idealization or oversimplification of the porous structure geometry that at the end may render the proposed method either incomprehensible or simply too bogus to be meaningful. Understanding the impact of rock wettability on multiphase flow of oil and gas in the reservoir is very important in many secondary and enhanced oil recovery (EOR) processes. This paper gives a brief review of studies that describe the pore-network models used in explaining trends in waterflood oil recovery as a function of wettability of the rock system.

Based on experimental data from a broad range of porous materials, it has been shown that most of the shortcomings mentioned earlier can be overcome through the application of pore-scale modeling using real structural representations and surface properties of the rock system. Techniques that have the potential to greatly improve our understanding of wettability in real porous systems have been developed and are increasingly being used. One of the techniques is direct 3-D imaging of the pore-scale distribution of fluids in reservoir pore spaces using X-ray computed tomography. Pore network partitioning methods are then used to define local pore scale fluid distributions and individual pore saturations.
Pore network models
As stated above, wettability has not received much attention despite its  signiﬁcance,  and  only  few  studies have been conducted on its impact on oil recovery after water flooding. Even among these studies, complexities in porous media structure and experimental conditions have made it difficult to develop a global understanding of wettability. Pore networks are simplified representations of the complex geometry of the porous media that show how pore spaces and pore throats are interconnected. This geometric simplification makes network models computationally very efficient and able to handle sizes in the meso-scale. A pore network in which the elements are typically assigned relatively simple shapes amenable to analytical treatment: spheres for pores and cylinders for throats is shown in Figure 1. Pore network models are practical reservoir description and simulation tools used to study a variety of two- and three-phase displacement processes. Pore-scale modeling has been used successfully to predict many different properties, such as two- and three-phase relative permeability and wettability impact on reservoir fluid distributions (Valvatne and Blunt 2004; Valvatne et al., 2005; Thibodeaux et al., 2015; Raeini, 2017). From rock samples methods have been developed to analyze the pore space and extract geologically realistic networks. These methods have been applied to analyze waterflood oil recovery trend as a function of wettability at the field scale, demonstrating the potential of waterflooding in a variety of sandstones, fractured and carbonate reservoirs. 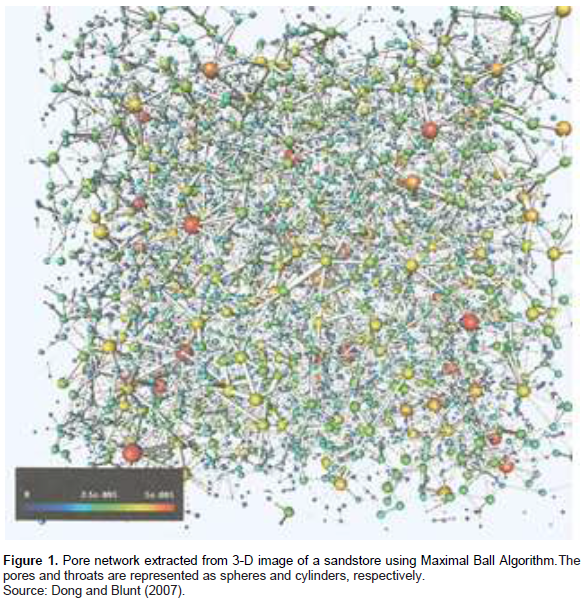 The popular use of pore-network models to represent multi-phase flow was pioneered by Fatt in the 1950s who shifted away from the existing method of representing the porous media using bundle of tubes to the use of a 2-D lattice network to randomly assign throat radii for calculation of various properties of the network (Fatt 1956a, b, c). The subsequent increased interests in using pore-scale network modeling have led to the development of many models with different representations of pore space that are used in the characterization of multiphase flow (Blunt and King 1991; Lowery and Miller 1995; Fenwick and Blunt 1998; Blunt 1998; Koplik et al., 1998; Dixit et al., 1999; Tuller et al., 1999; Hui and Blunt 2000; Dillard and Blunt 2000). Some of these representations, shown  in Figure  2, have   been reviewed by, e.g., Berkowitz and Balberg (1993), Sahimi (1995) and Blunt (2001; Sok et al., 2002; Raoof and Hassanizadeh, 2010). 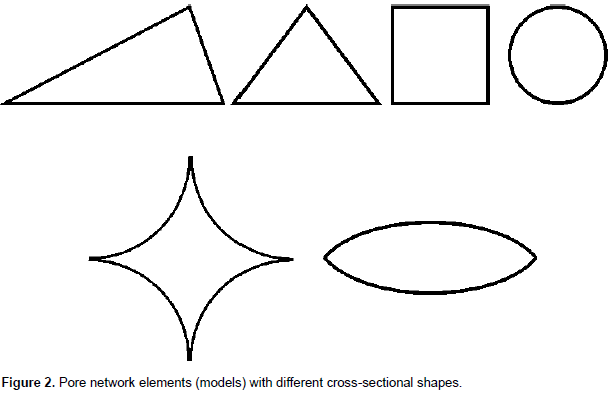 Pore-network modeling has come to stay as a very useful tool for understanding results obtained in experiments on waterflooding of core samples obtained from different reservoir rock systems and for explaining and predicting trends in oil recovery as a function of wettability both at the laboratory and field-scale levels. Using a realistic representation of the pore spaces of various rock systems derived either by statistical or explicit method or through network tuning, we can quickly predict many physical processes such as waterflood relative permeability and fluid transfer coefficients. There is the need to carry out more research in as many hydrocarbon reservoir rock systems as possible, especially in shale gas-oil-systems in order to characterize the pore space and wettability trends. This, together with pore network modeling, will help us to design projects for improved hydrocarbon recovery from such systems by waterflooding.
In the years to come and until a better process and more reliable technologies are developed, waterflooding will continue to remain the most viable and widely applied method for improved oil recovery in both conventional hydrocarbon reservoirs onshore, offshore and in deep/ultra-deep water oilfields. Therefore, an understanding of the pertinent pore-level fluids displacement processes is necessary for obtaining accurate prediction of wettability effects on oil recovery by waterflooding. This is also very important for such globally pressing and highly challenging issues as the capture and safe storage of CO2, vadoze zone remediation of oil spills and soil contaminants, and natural gas recovery.

This work was supported by the National Research Foundation (NRF) of South Africa under the ‘Incentive’ grant. The authors express their appreciation to Reuben Duniya for his help in explaining the experimental procedures involved in waterflood studies and the management of Location Sample Services, Port Harcourt  for granting them the permission to use their laboratory for experimental studies on waterflooding and oil recovery.