The specific gravity of oil shale can be used as a practical tool for estimating total organic carbon (TOC) and the oil yield of shales from a given source. Sixteen random oil shale samples, mostly from the Upper Cretaceous Duwi Formation in Quseir - Safaga district in the Eastern Desert of Egypt, were collected. Experiments were conducted to determine the density, TOC and oil yield of such samples. The study has developed empirical correlations that show good relationships between the oil shale density (solid organic and mineral density), its TOC and oil yield. Validation of these correlations has been verified by examining two more samples and tested mathematically. The obtained results of TOC and oil yield from the correlations were not as reliable as values obtained from the experimental work especially for the lower TOC samples. The average error has been evaluated to be 15.9%. However, they are accurate enough for certain processes like oil shale processing, where time and equipment restrictions do not allow experimental determination of the TOC and oil yield, and rapid results are desired. These correlations provide a convenient, nondestructive and rapid means of estimating the oil yield and TOC of shales from the same formation.

The evaluation of total organic carbon (TOC) of oil shale source rocks is very important for source rock studies as it gives a direct indication about the petroleum generation potential. The oil yield of the oil shale is also an important parameter that needs to be evaluated to give an indication about the potentiality of the oil shale. However, measuring TOC and oil yield are time consuming processes and could not be accessible at the well sites. Fortunately, such parameters are readily correlated with an easily measurable property of the rock which is the density of the solid part of the rock (mineral + organic).

Measuring the solid density is a rapid and practical methodology that preserves the samples and is widely used for evaluating the oil shale petroleum potential (Braun, 1976; Frost and Stanfield, 1950).

However, no work was found regarding the Egyptian oil shale. This study attempts to employ experimental methods in order to evaluate a relationship between the solid specific gravity, its organic content, and oil yield of black shales in the Campanian - Maastrichtian Duwi Formation of the Safaga - Quseir District, Eastern Egypt. This will in turn provide an easily accessible method for evaluating the organic content and oil yield of oil shales of such a formation without the need to perform the experiments under concern.

Sixteen oil shale samples were collected from shale stocks stored in phosphate mining areas, formerly produced as tailings, whilst phosphate mining in Duwi Formation was taking place in Qusier-Safaga area in the Eastern Desert of Egypt. The only exception is B3 sample which is a weathered outcrop sample from the Dakhla Formation. It was intended to collect large oil shale blocks as possible to perform the experiments on the core of such large blocks which are supposed to be less weathered than their surfaces. Two more oil shale samples, namely B4 and N2, have been obtained from Beida and Nekheil areas respectively to undergo the same experiments. These samples were used for the purpose of verifying the validity of the resulting correlations. Table 1 shows the samples with their locations and names. 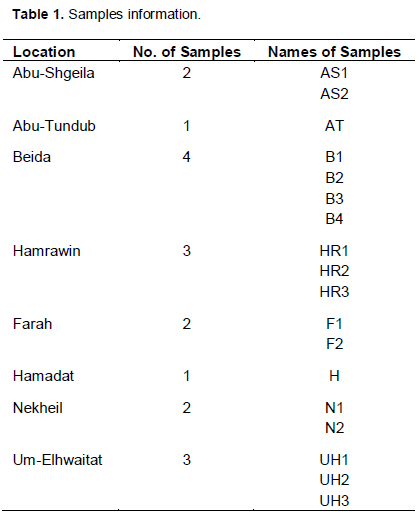 Samples were pulverized for total organic carbon (TOC) determination. The samples were then treated with dilute (10 %) hydrochloric acid (HCl) to remove carbonates. Afterwards, the samples were heated in HCl solution on a hot plate for 2 h to ensure the dolomite was completely dissolved. Then they were filtered and mildly heated to evaporate water and HCl. Finally, TOC was measured on carbonate free samples using a LECO C230 analyzer. This measurement was performed at StratoChem Services Company, Cairo, Egypt. For oil yield measurement, the samples were ground and sieved to mesh size +8 (2.38 mm). A mass of 100 g of each sample was heated in a Vinci retort oven to 500°C at an average rate of 15.3°C/m and left at such a temperature for 1 h. The produced oil and water volumes were later measured. For solid density measurement, the samples were dried in a drying oven to evaporate water so that the weight to be measured would be that of the organic and mineral materials only. Then Helium porosimeter was used to measure the samples’ porosity which was then used along with the measured bulk volume to compute the solid volume which – in turn – was used with the measured weightto evaluate the density of the solid (organic plus mineral) partorganic plus mineral matrix densityat 20oC.The magnitude of error resulting from such a temperature is negligible. The bulk volume was measured by immersion of wax coated samples in water. The oil yield and density measurements were made in the laboratories of Petroleum and Energy Engineering Department, School of sciences, the American University in Cairo.

Results of TOC, solid (organic and inorganic matrix) density, porosity and oil yield are shown in Table 2. The TOC values of Duwi Formation samples range from 1.07 to 15.90 wt. % (averaging 4.15 wt. %). These TOC values are greater than the 0.5 wt. % threshold value required for a potential source rock to generate hydrocarbons (Peters and Cassa, 1994; Tissot and Welte, 1984).

For the oil yielding samples, Table 2 shows that the oil yield ranges from 1.85 to 26.42 gal/t. Such values are less than those estimated by Tröger (1984). This could be attributed to the difference in the used retorting technique and the longer atmospheric exposure, which has more affected the samples used here. The Nekheil samples (N and N2) are the most productive, which is in agreement with El-Kammar (1993).

The study arrived at correlations that relate TOC, oil yield, and the solid specific gravity. Such correlations provide practical means to approximately determine the TOC and the oil yield of the black shales of Duwi Formation by just measuring the specific gravity of the solid (organic plus mineral) part of the rock rather than resorting to the time consuming expensive experimental work of determining TOC and oil yield. Presented below are the developed correlations. 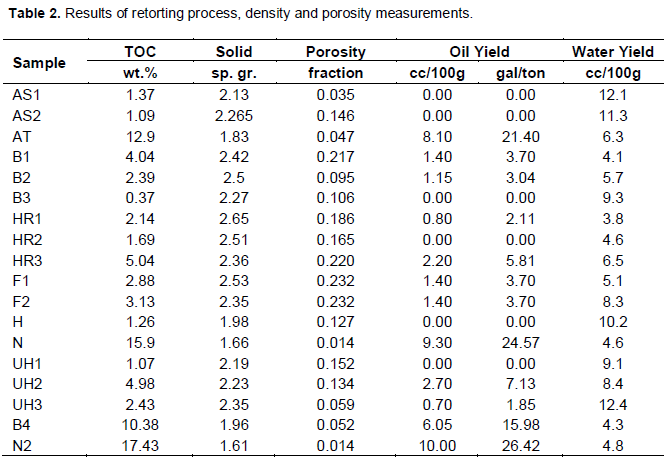 Figure 1 shows that the oil yield is strongly correlated to TOC. This is reasonable because the TOC is the source of the generated oil. Samples with TOC < 2% do not yield oil. Geochemical analysis of such samples has shown that they contain kerogen of type III and IV (Shaker et al., 2014). Such refractory organic materials do not combust readily at 600°C (Crain, 2013). Thus no oil is produced at the used retorting temperature (500°C). It is important to observe that the validation samples, B4 and N2, lie so close to the correlation line indicating the validity of the derived correlation.

(1) Outcrop sample: Sample B3, which is the only highly weathered sample due to its nature as an outcrop sample. It has a low specific gravity despite its low TOC. 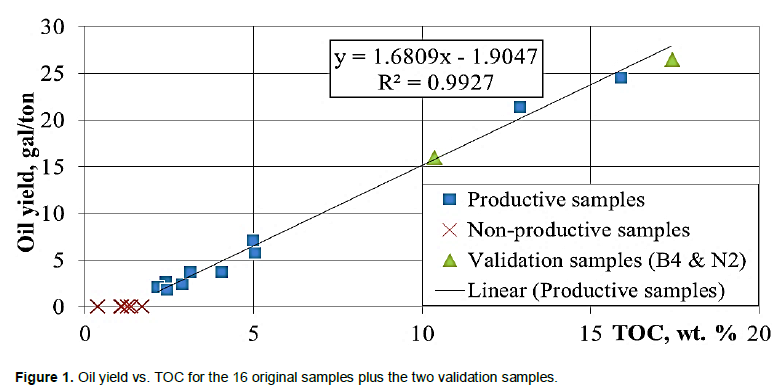 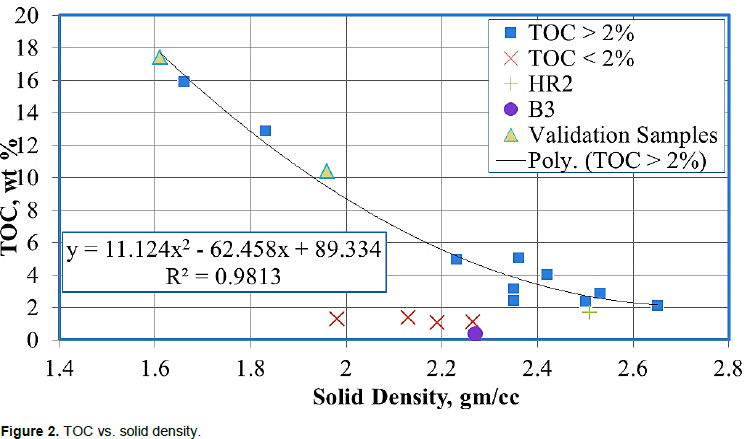 Like the oil yield-TOC correlation, samples B4 and N2 have assessed the correlation’s validity. This correlation in Figure 2, provides an easily accessible method to evaluate the TOC on condition that the TOC is higher than 2% for samples from Duwi Formation in Quseir - Safaga area.

Since TOC and solid density are related on one side and TOC and oil yield are related on the other side, it is obvious that oil yield and solid density should be related. Figure 3 shows such a relationship. The validity of this correlation has been confirmed as well by the validation samples, B4 and N2. The given correlation is an easy way that can be used to directly estimate the black shaleoil yield without the need to perform the tedious retorting process.

Samples B4 and N2 have verified and proved the validity of the strong correlations between solid density, TOC, and oil yield as we have seen. In addition, the validity of the correlations has been tested mathematically as shown in Table 3. The obtained results of TOC and oil yield from using the correlations are not as reliable as values obtained experimentally, especially for the lower TOC samples. The average error has been evaluated to be 15.9%. The error is roughly inversely related to TOC. However the correlations are accurate enough for certain processes like oil shale processing for which rapid results are desired and accuracy is not highly required. 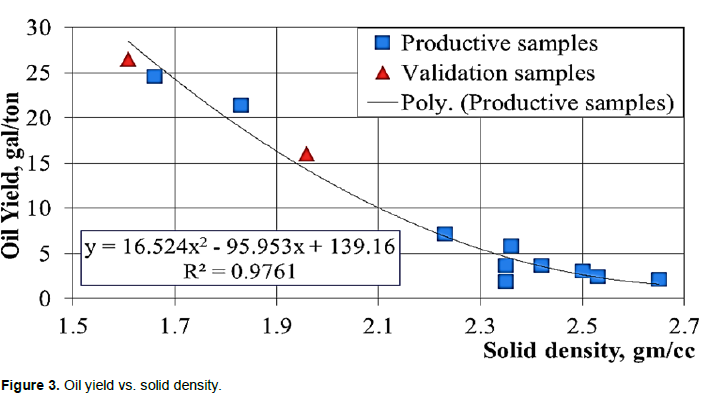 The study has arrived at correlations that link between TOC, oil yield and the solid specific gravity. Such correlations provide convenient, nondestructive, and rapid means to approximately determine the TOC and the oil yield of the black shales of Duwi Formation by just measuring the specific gravity of the solid (organic plus mineral) part of the rock instead of the time consuming experimental work of determining TOC and oil yield. The obtained results of TOC and oil yield from the correlations are not as reliable as values obtained from the experimental work especially for the lower TOC samples. The average error has been evaluated to be 15.9%.

However, they are accurate enough for certain processes like oil shale processing where time and equipment restrictions do not allow experimental determination of the TOC and oil yield and rapid results are desired.

It is important to note that the samples used are not fresh samples and the coefficients of the correlations could be modified by further analysis using fresh core samples drilled in Duwi Formation. Also, in determining oil yield, using the standardized Fischer Assay method could be more reliable for developing the correlations which are expected to give more acceptable results.

The authors express their gratitude to Dr. Mohammed Said, General Manager of StratoChem Services Company for his assistance in performing the TOC experiment used in this study. They would also like to thank the laboratory technicians of the Petroleum and Energy Engineering Department, School of Sciences and Engineering, the American University in Cairo; Eng. Shadi Azer, Mr. Samer Mina and Mr. Marawan Moussa for their generous help and support during performing the experiments.