According to International Agency for Cancer Research (IARC), in 2018, 569,847 new cases of cervical cancer and 311,365  associated  deaths were reported in women worldwide (Bray et al., 2018).  In Côte d’Ivoire, cervical cancer is the second most common cancer among females  with age-standardized (World) incidence rates of 28.6 per 100,000 women. Of the 1,789 women diagnosed in 2018, 1,448 deaths occurred making cervical cancer the leading cause of cancer related death in this country (Bray et al., 2018). This malignancy can be prevented through systematic screening for adult women and HPV immunization for adolescent females prior to sexual initiation (World Health Organization, 2014). To overcome financial and human resources challenges raised during the implementation of screening programs using pap smear, low and middle income countries (LMICs) endorsed visual inspection with acetic acid (VIA) as an alternative screening method, as recommended by the WHO (2013). Following a pilot phase of screening, the VIA-based program scaled up across sub-Saharan African countries (Shiferaw et al., 2016; Blumenthal et al., 2007; Parham et al., 2015; Boni et al., 2019; Ouedraogo et al., 2018).

In Cote d’Ivoire, a VIA based screening program was implemented since 2009 through a pilot project targeting women living with HIV and successfully scale up to women in the general population aged 25 to 55, and across the country in 2012 (Boni et al., 2019). According to the National Cancer Control Program (NCCP), approximately 140 cervical cancer screening units across the country offer screening to women following the single-visit approach (or "See-and-Treat" approach), while regular awareness campaign are conducted by Non-Government Organizations (NGOs)  (PNLCa, 2020) . According to country National guidelines, women tested positive with VIA, should benefit from immediate cryotherapy when eligible. Women not eligible for immediate cryotherapy are to be referred to a specialist for Loop Electrosurgical Excision Procedure. A  one-year follow-up visit  for VIA control, consisting of a new VIA to ensure the healing of the cervical abnormality (proved by a new VIA negative) is mandated for all treated women regardless of HIV status (National Cancer Control Program, 2013).

A recent evaluation of the cervical cancer screening program reported a 23.1% post cryotherapy follow-up visit rate (Boni et al., 2019). However, the reasons and factors associated to this low rate are still poorly documented. The principal aim of this secondary analysis was to explore the correlates of follow-up for women receiving cryotherapy after testing positive for precancerous lesions in Abidjan, Cote d’Ivoire.

A   retrospective   cohort   study   was   conducted   based  on  data collected by the NCCP of Côte d’Ivoire, among women who received cryotherapy in the 27 facilities for cervical cancer screening in the urban area of Abidjan from January 2010 to December 2014.

This secondary data analysis was performed using the cervical cancer screening program database developed by the NCCP to follow-up cervical cancer screening activities (Boni et al., 2019). Individual data of all VIA positive women treated by cryotherapy were extracted, including demographic characteristics (age, district of location), HIV status (positive, negative, unknown), The type of VIA provider (physician, midwife) and characteristics of facilities where women received VIA and cryotherapy. These health facilities were disaggregated according to the level in the health pyramid (primary level; secondary level and tertiary level), the HIV services delivery (exclusive HIV clinics; integrated health facility; no HIV service offer), and their proximity to the participant house (around or far from the living place of the participant).

Categorical variables were described using frequencies and percentages while continuous variables were described using medians and interquartile range (IQR). Chi-square test and Fisher exact test were used for the comparison of categorical variables. Univariate and multivariate logistic regression were used to assess factors associated with follow-up after cryotherapy. All variables associated with follow-up after cryotherapy with a significance level ≤0.25 in univariate analysis were included in multivariate analysis. All analyzes were performed using STATA V14.0 (StataCorp, College Station, Texas).

Administrative clearance was obtained from the Ministry of Health to use the NCCP cervical cancer screening database for this secondary analysis. Given the retrospective nature of these anonymous routinely collected data, a consent weaver was also granted.

Among the 618 women treated by cryotherapy, 143 (23.1%) attended one of the screening units for a follow-up visit. 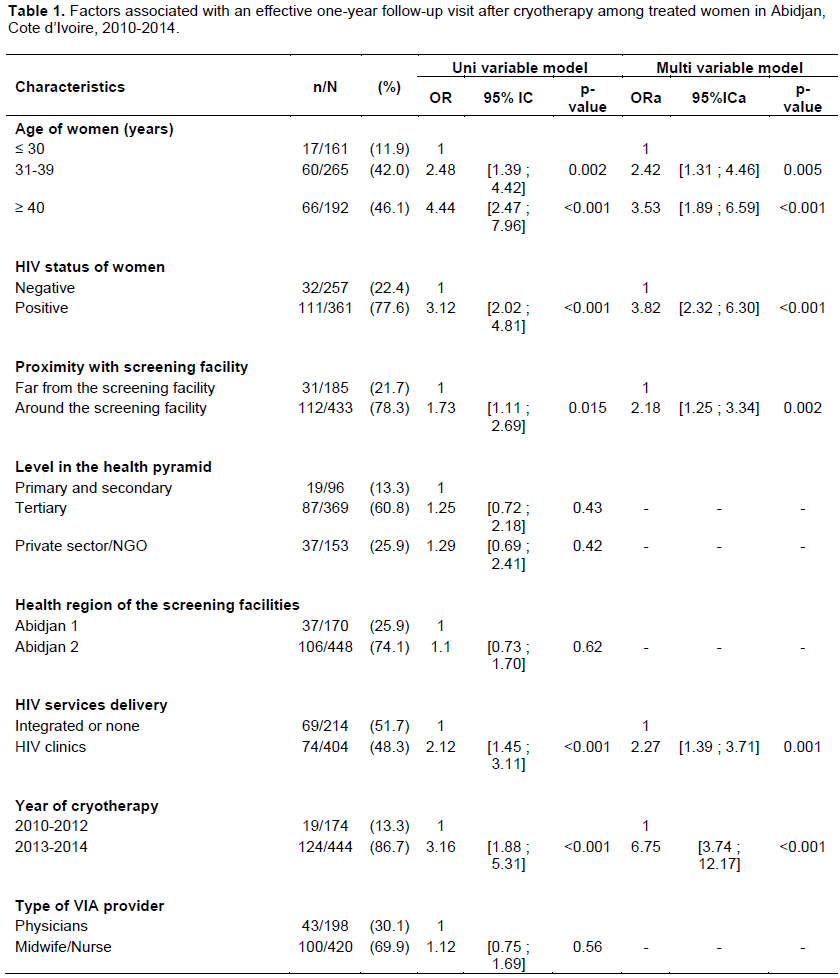 This study provides the first data on factors affecting a follow-up after cryotherapy uptake in Côte d'Ivoire. Being HIV positive and attending an HIV clinic were significantly associated with attendance to the follow-up visit. In addition, proximity with a cervical cancer screening facility and access to screening and cryotherapy after the year 2013 also showed a significant link with one-year follow-up visit.

This study suggests a higher one-year post cryotherapy attendance rate among HIV positive women followed up in HIV clinics. This higher rate among HIV positive women could be the positive impact of the “retention to care” package implemented in HIV clinics. These includes SMS reminders and phone calls for antiretroviral drug pick up, as well as transport reimbursement and food supply during psychosocial support groups (Project Djidja Brief (2020). These retention strategies led to more frequent contacts with the health facility among HIV positive women, increasing the possibility for health care workers to remind participants of the post cryotherapy follow-up visit, as well as for women to attend the integrated cervical cancer unit at the time of this visit. In addition, the improved patients file management and existence of HIV client’s databases in almost all HIV clinics facilitates  the  follow-up  of  HIV  positive  women receiving cervical cancer screening services. Leveraging on the HIV clinics experience, the cervical cancer prevention programs in Sub-Saharan Africa could identify innovative and sustainable interventions to maintain frequent contact (mainly virtual) with women attending cervical cancer screening units. Strategies for introducing mobile health interventions such as SMS reminders, mobile apps calendars, and phones calls have been shown to be acceptable and feasible for cervical cancer screening in previous studies from South Africa and Australia respectively (Moodley et al., 2019; Downer et al., 2006).

This study did not assess some of the demographic and socioeconomic factors encompassing marital status and personal income that could help explore patient-related barriers to attending post cryotherapy follow-up visits. However, this study is among the first to explore the correlates of attendance to follow-up visit after cryotherapy in West Africa. Findings from this study could implementing partners, in designing or adopting innovative and sustainable interventions to effectively prevent cervical cancers in Sub-Saharan African countries. However, further studies are needed to better understand the determinants of follow-up after cryotherapy or thermo-coagulation in developing countries, and assess the effectiveness of some promising approaches.

Warm appreciation is extended to “International Epidemiology Databases to Evaluate AIDS (IeDEA) West Africa” and Dr Antoine Jaquet for their support to NCCP in data management and cancer registry improvement. The NCCP team is also thanked for the collaboration.