Chlamydia trachomatis is a major causative agent of sexually transmitted disease (STD), which can damage a woman’s reproductive organs. The prevalence of Chlamydia trachomatis infection was investigated among 200 pregnant women attending antenatal clinics in three hospitals located within Kaduna metropolis, North-Central, Nigeria. Enzyme linked immunosorbent assay technique was performed to detect chlamydia antibodies. The overall prevalence of C. trachomatis in the population studied was 9.5% (19/200). The highest percentage of prevalence rate, 6.5% (13/200), was seen in women belonging to the age group of 25 or less; this corresponds to women in their late teens and early twenties, and was also the most sexually active age group. Polygamy and low income status were also associated with higher infection rates. The commonest symptom recorded for the respondents that tested positive to Chlamydia infection was found to be vaginal irritation (27.8%), followed by vaginal discharge (25.9%); other symptoms observed were dysuria (14.8%) and lower back pain (9.3%). 18.5% of respondents had a past history of sexually transmitted diseases (STDs). The distribution of women that tested positive for C. trachomatis antigen within the hospitals investigated showed that 11%, (11/100) were from Yusuf Dantsoho Memorial Hospital, with a similar number, 11.66% (7/60), from Kawo General Hospital, while Shehu Mohammed Kangiwa Medical Centre was seen to have only 2.5% (1/40) positive cases. C. trachomatis infection is largely underdiagnosed in the population, therefore specific preventive and intervention strategies for Chlamydia infection should be developed and targeted among the sexually active general population.

Chlamydia is a common sexually transmitted disease caused by the bacterium  Chlamydia  trachomatis,  which can damage a woman’s reproductive organs such as the uterus (womb),  fallopian  tube,  ovaries  etc. The scarring that results on these organs can lead to infertility, tubal (ectopic) pregnancy, chronic pelvic pain, abscesses (sores containing pus) and other serious problems (Paavonen and Eggert-Kruse 1999).Chlamydia is transmitted through sexual contact with the penis, vagina, mouth, or anus of an infected partner. Ejaculation does not have to occur for chlamydia to be transmitted or acquired.

Perinatal infections also occur; as many as half of all infants born to mothers with chlamydia will be born with the disease (Chojnacka et al., 2012). Chlamydia can affect infants causing spontaneous abortion, premature birth, conjunctivitis, which may lead to blindness, and pneumonia (Cates et al., 1990).  In fact, C. trachomatis is the most common cause of neonatal conjunctivitis and is one of the most common causes of pneumonia during the first few months of live. Infants with Chlamydia pneumonia are at increased risk of abnormal pulmonary function tests later in childhood (Harrison et al., 1983; Taffa, 2002). Pregnant women can be more susceptible to chlamydial infection, due to changed pH of the vaginal region, and depressed immunity (Satyajit et al., 2005).

Sexually active young people are at high risk of acquiring chlamydia, due to a combination of behavioral, biological, and cultural reasons (Eaton et al., 2012).

Chlamydial infections are usually asymptomatic, and in many developed countries, screening programmes for Chlamydia have been set up to reduce transmission and reproductive tract morbidity (ECDC, 2009). Currently, chlamydia screening for sexually active women aged <25 years is recommended by the  U.S.  Preventive  Services Task Force (Torrone, 2012).

This study was conducted to estimate the seroprevalence of C. trachomatis infection among pregnant women attending antenatal clinics in Kaduna metropolis, North Central Nigeria, and to assess some of the risk factors associated with the disease.

The study was carried out at Kaduna Polytechnic Medical Centre, Tudun Wada, Yusuf Dantsoho Memorial hospital, and Kawo General Hospital Kaduna within the months of July-September, 2017. The hospitals provide health care for lower- middle class and lower income population within and around the geographical location as shown in Figure 1. 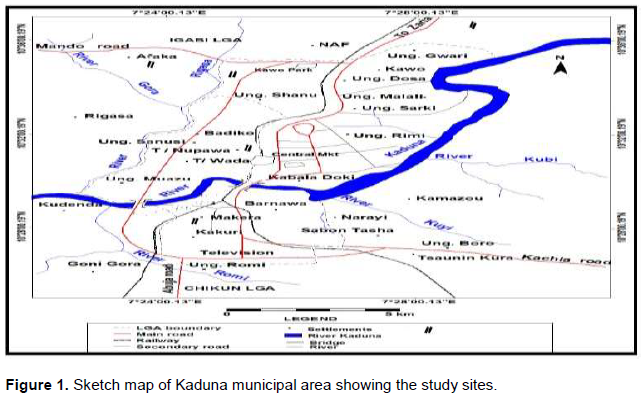 Ethical approval was obtained from the hospitals. All pregnant women attending the hospitals antenatal clinics during the period of the study were involved in the study. Individual consent was sought and patient confidentiality was ensured. Clinical variables including symptoms were obtained via questionnaire.

Blood samples were taken using sterile disposable syringes from all the women who attended the ante natal clinics. The blood samples were allowed to clot and centrifuged at 3,000 rpm. The sera were then separated into plain bottles and preserved at 2-8OC.

The qualitative immunoenzymatic determination of IgG - class antibodies against C. trachomatis is based on the Enzyme linked immunosorbent assay technique (ELISA). C. trachomatis antibody was determined using C. trachomatis IgG ELISA, Trinity kits, Cat No 2346200, USA. Microtiter strips wells were precoated with C. trachomatis antigen to bind corresponding antibodies of the specimen. After washing the wells to remove the unbound sample material, horseradish peroxidase (HRP) labelled anti-human IgG conjugate  was   added.  This   conjugate   bound   to  the  captured Chlamydia specific antibodies. The immune complex formed by the bound conjugate was visualized by adding tetramethylbenzidine (TMB) substrate, which produces a blue reaction product. The intensity of this product is proportional to the amount of Chlamydia-specific IgG antibodies in the specimen. Sulphuric acid was added to stop the reaction. Absorbance at 450 nm was read using an ELISA micro well plate reader.

Pearson’s Chi-square test was used to test for the association between C. trachomatis infection and age groups of subjects, level of education, income, marriage type. Probability (p) values were considered as follows: If P value < 0.05 = there is statistically significant association between the two variables.

Two hundred and five questionnaires were administered to respondents, and 200 were returned. This indicated a 97% response rate which is considered an excellent response rate and sufficiently representative for the analysis. The data obtained showed there were no single mothers among the respondents as all indicated they were married.

The data in Table 1 shows that the majority of the pregnant women within study group were in the age group of ≤ 25, fell within the low income bracket, had primary school qualification or no formal education. 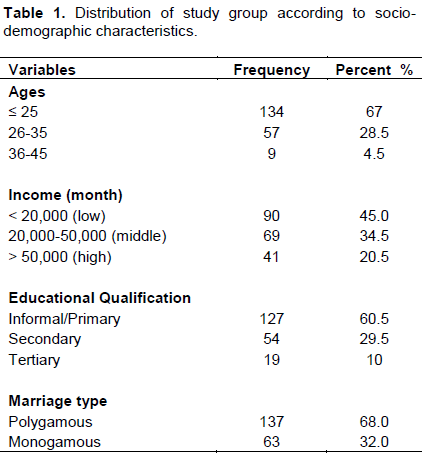 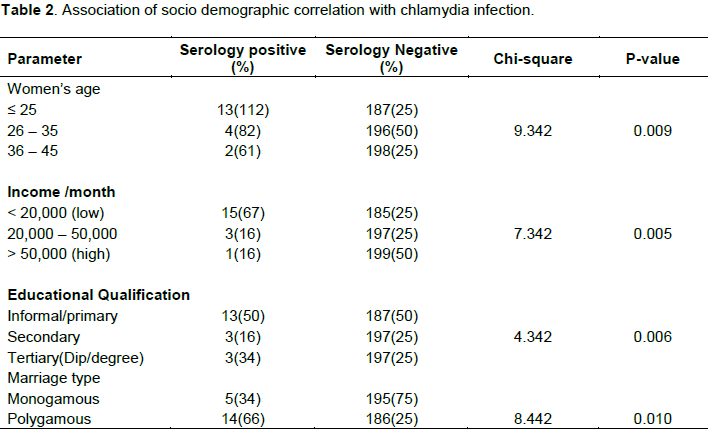 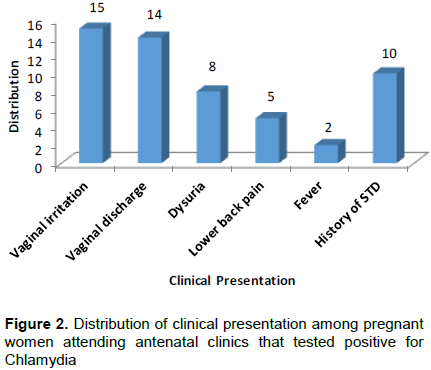 From the socio-demographic correlation carried out, it was found out that there was significant association between the socio-demographic factors such as age, level of income, educational qualification and marriage type and chlamydia infection, with probability values for each less than 0.05 (PË‚0.05),  against the non-significant p values of PËƒ0.05.

The prevalence rate of Chlamydia infection reported in this study was 9.5% using the serological approach; this falls between rates reported by other studies in similar subjects and settings (2.5% and 36%) (Taffa et al., 2002); and significantly lower than the 57.5% prevalence in pregnant women reported by Mohammed et al., (2016).

The number of previous studies conducted in Nigeria is limited: in a study in Benin, Nigeria, prevalence rate of chlamydia infection in pregnant women was 13.3%, (Isibor et al., 2005) which is higher than the findings in this study; another from infertility and STI clinics showed 9.6% (Nwankwo and Magaji, 2012); and 57.5% was found in pregnant women in North–Central States (Mohammed et al., 2016). Other reports from STI clinics also showed variable prevalence (Van Duynhoven et al., 1997).

It is worth mentioning that the incidence of Chlamydia infection in developing countries is difficult to establish due to many factors. There is a socio cultural inhibition that prevents women from reporting sexual symptoms, non-availability of facilities to detect the organism in many health clinics, the asymptomatic nature of the disease and variation in the sensitivities and specificities of the various diagnostic kits used (Okonofua et al., 1995; Harry et al., 1994; Nwankwo and Magaji, 2012).

In an attempt to identify high risk factors among women attending the clinics and the predisposing factors associated with the disease, several determinants were studied. It was found that age, economic status, educational qualification and marriage type were significantly associated with positive chlamydia infection.

The significant association between positive chlamydia infection and low income/level of education found in this study could be attributed to poor health literacy and inability to access care or screening because of financial constraints. Because of socio economic reasons, women attending antenatal clinics might not have previously consulted a doctor for chlamydia, and might be seeking treatment for the first time at those clinics for health problems. The significant association of income and education with positive chlamydia infection is consistent with some studies (Behrozi et al., 1999). The high prevalence observed for young adults (≤ 25 years) could be attributed to the increased risk for infection because of biologic risk factors (for example cervical ectopy might predispose to infection and is more common in younger women) (Kleppa et al., 2015), other factor could be sexual behavior as these are the most sexually active age group. The significant association between young age (<25 years) and chlamydia infection is in agreement with others studies (Kissin et al., 2002; Alarape et al., 2008).

A decreased susceptibility to infection with increasing age has been attributed to epithelial changes, which may result in a decreased rate of infection in the elderly (Latino et al., 2002). Partial immunity can also prevent reinfection in the elderly (Bachman et al., 2003). The effect of age may also be attributed to non-measured sexual characteristics such as frequency of sexual intercourse per partner and the duration of intercourse (Van Duynhoven et al., 1997).

Based on the analysis, it was shown that some respondents that were asymptomatic tested positive to C. trachomatis antibodies. This finding agrees with the results of other researchers (Sturm-Ramirez et al., 2002).

Regarding sexual behaviour, not surprisingly, most women provided no answers to most of the questions like condom use, extra marital sex. This is probably due to strong religious beliefs in the community about extra marital sex. Obtaining information on such issues is almost impossible in our community because such activities are often illegal, and lack of such data is a limitation of this study, especially when trying to determine an association between sexual activity and chlamydia infection.

It is therefore imperative that a concerted effort should be put in place to ensure that chlamydia investigation is made part of routine screening among young teens and pregnant women, to avoid any post abortal complication, infertility and mother to child transmission.