North Carolina has both a syndromic surveillance system (NC DETECT) and a reportable communicable disease surveillance system (NC EDSS), in addition to a sentinel provider network surveillance system which is used to monitor influenza-like-illnesses during flu season. NC DETECT captures data from emergency department, poison control center, and emergency medical services settings (Samoff et al., 2012). These data are made available in a timely manner through the NC DETECT web portal. Employees of any public health agency may receive access to NC DETECT appropriate to their jurisdiction, but only communicable disease (CD) staff at local and state public health agencies can access NC EDSS. Currently, NC DETECT is primarily used by state-level epidemiologists and hospital-based public health epidemiologists (PHEs), who specialize in interpreting and using syndromic surveillance data. In general, LHD staff receive NC DETECT information from PHEs or state surveillance staff (Samoff et al., 2012; Markiewicz et al., 2012); this distribution occurs on an as-needed basis. Syndromic surveillance data are distributed to LHDs by telephone call; a small number of LHDs also received regular reports from hospital-based PHEs in 2009. Some PHEs also regularly distribute reports to local counties, although the report may cover the hospital rather than the LHD jurisdiction. During outbreaks, state staff and PHEs can serve as a link between syndromic surveillance data and LHD staff.

During the 2009 novel influenza A (H1N1) pandemic, state health department staff took a different approach to distribution of syndromic surveillance information. State-wide syndromic surveillance case numbers were distributed to North Carolina’s local health departments (LHDs) by email in a weekly influenza surveillance summary report produced by the state (Lee, 2010). The first page of the report provided a description of state information and the sample from which the data were derived.  The second page contained information  on  the number of influenza-like illness cases reported by sentinel surveillance systems during each week of the outbreak. Graphical representations of the data followed as well as the characterization of confirmed cases by virus type for cases reported by sentinel surveillance. The syndromic surveillance data were presented graphically in as many as four different but complementary figures to detail the status of the outbreak distribution, magnitude, and morbidity and mortality. A short description of influenza-related deaths was included in the report, and it concluded with a list of sentinel surveillance data providers.

This study compared the use of syndromic surveillance information during the H1N1 pandemic and a reportable disease outbreak occurring between June 2008 and June 2009.

The 85 NC local health departments (LHDs) were stratified by NC state population textiles, and then 1 very large (population >200,000, 10 of 85 LHDs), 7 large (population 53,377 -200,000, 41 of 85 LHDs), and 7 small (population <53,377, 37 of 85 LHDs) LHDs were randomly selected for study. The LHD Director and a CD Nurse from each LHD were invited to participate, with a total of 30 LHD staff invited to participate. Face-to-face interviews using a standardized questionnaire were conducted with LHD Directors and communicable disease nurses (CD Nurses) across North Carolina from May to September, 2009. The project was exempted from review by the Institutional Review Board of the University of North Carolina at Chapel Hill.

The interview survey captured information on responses to two outbreaks: one was chosen by the respondent (“an event you responded to in the past year”) and the other was the 2009 H1N1 influenza pandemic. These will be referred to as the “infectious disease outbreak” and the “H1N1 influenza outbreak”. The survey captured qualitative and quantitative data, including questions on how staff received information from NC EDSS and NC DETECT (“Do you access NC DETECT/NC EDSS yourself?” “Do you look at NC DETECT/NC EDSS data provided by someone else?” and, “If someone else, who?”) and on NC EDSS and NC DETECT usage for both the H1N1 pandemic and another prior reportable disease outbreak ((during this outbreak) “Did anyone look at data from NC DETECT/NC EDSS?”). The survey also asked how public health officials first learned about each outbreak (“From what source did you first learn about this event?”), and what other data sources were used to learn about an outbreak (“Please list data sources used to learn whether there was an increase in cases”). Proportions were calculated to compare users and uses of NC DETECT and NC EDSS by outbreak. Fisher’s exact test was used to test for differences. Respondents were asked to describe the response to the outbreaks, how surveillance data were used in the response, and whether the surveillance data were useable and timely; these responses were transcribed and Atlas.ti was used to code qualitative responses. All quantitative data analyses were performed using SAS 9.1 (Cary, NC). Statistical significance was determined using an alpha of 0.05

Interviews were completed  with  27 LHD  staff  members from 14 LHDs for a total of 27/30 invitees (a 90% response rate); one small LHD did not respond. When asked about knowledge of NC DETECT, 93% (25 of 27) of the respondents correctly described NC DETECT as a syndromic surveillance system, and 48% (13 of 27) reported “using information from NC DETECT to learn about public health events.”

Our hypothesis that LHD staff may be contacted by PHEs and state surveillance staff when a case is of public health interest was confirmed with qualitative data; for example, one survey respondent stated [the PHE] “is really good about calling … and giving me a heads up”. However, only a subset of the 27 respondents (29%) reported contact with a PHE during the infectious disease outbreak. All LHDs responded to the H1N1 influenza outbreak, and all received the previously described influenza surveillance report. 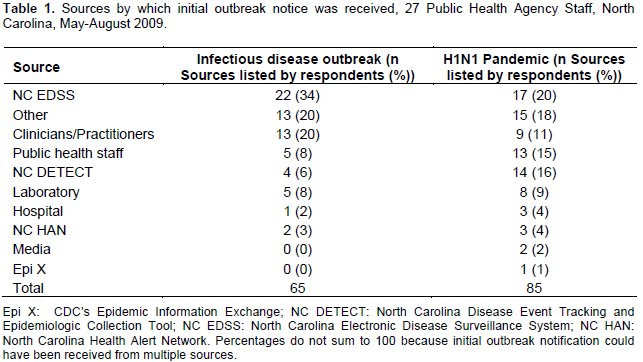 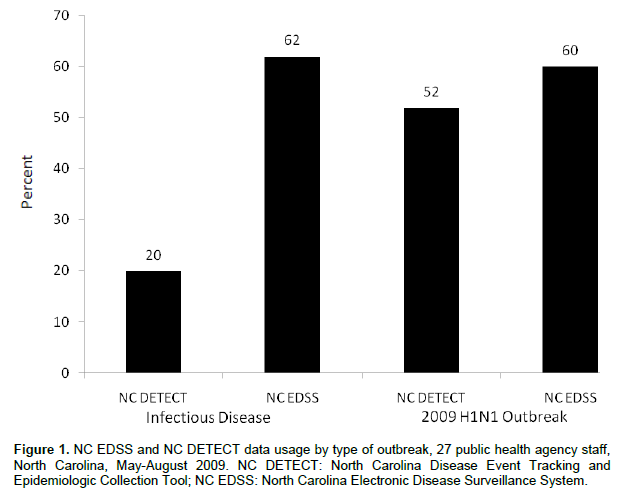 This work has several important limitations. While case-patients from many of the outbreaks described by local health department staff may present in settings where the syndromic surveillance data originates in North Carolina (e.g. the emergency department), case-patients were known to have presented at the emergency department for the H1N1 pandemic, making emergency department surveillance more important to this outbreak response than it may have been in the participant selected infectious disease  outbreak.  The  H1N1  pandemic  may have been more memorable to local public health staff than another infectious disease outbreak, possibly resulting in recall bias. Furthermore, the study sample was small and the sample included only 1 large urban county which may not be representative of the other NC large urban county. Finally, the interviews were conducted in person, possibly leading to social desirability bias in the form of over-reporting of NC DETECT and NC EDSS use.

The authors would like to thank North Carolina Division of Public Health and local health department staff members for their generosity with their time and thoughts. The authors are especially appreciative of Carol Gunther-Mohr of the North Carolina Preparedness and Emergency Response Research Center (NCPERRC) for her assistance in project management and Meredith Davis and Mike Park, also of NC PERRC, for their work on study development. This research is a part of the NCPERRC which is part of the UNC Center for Public Health Preparedness at the University  of  North  Carolina at Chapel Hill’s Gillings School of Global Public Health, and was supported by the Centers for Disease Control and Prevention (CDC) Grant 1PO1 TP 000296. The contents are solely the responsibility of the authors and do not necessarily represent the official views of CDC. For additional information: http://cphp.sph.unc.edu/ncperrc.

The authors have no conflicts of interest to declare.