Immunization coverage of 12 to 23 months old children in Ethiopia

Vaccine preventable diseases are the major global health problem which contributes to morbidity and mortality of less than 5 years child population. But, the immunization coverage worldwide is below the target. Therefore, the study was aimed at immunization coverage of 12 to 23 months old children in Areka Town, Sothern Ethiopia. A community based cross-sectional study conducted from 10th March to 19th June 19, 2016 in Areka Town, Sothern Ethiopia. Data on 173 children aged 12 to 23 months from 173 households selected using a systematic random sampling. Analysis was conducted using SPSS version 20. The result presented in the all tables and figures. The study showed that, 130(75.4%) fully vaccinated and 93(53.6%) vaccinated during immunization campaigns. The sources of information for 39(22.5%) were radio and television. 22(12.9%) missed vaccine appointment day and 13(7.7%) interrupted vaccine program. Of the vaccinated children, 166(96.2%) vaccinated for Bacillus Calmette–Guérin (BCG), 138(80%) vaccinated for oral polio vaccine (OPV) 0, 172 (99.2%) OPV1, Penta1 and PCV1, 165(95.4%) vaccinated for OPV2, Penta2 and PCV2, 161(92.9%) vaccinated for OPV3, Penta3 and PCV3, and 158(91.5%) vaccinated for measles. The dropout rate from BCG to measles was 4.7%.Therefore, continuous support and health education at the community level is recommended.

According to prevalence of vaccine preventable diseases in each country and economic status of that nation, every country set their own immunization program (Mbengue et al., 2017). The Ethiopian health policy has given emphases to prevent and control major communicable diseases. It was integrated to general health services as essential component of primary health care. The program goal  remained largely unrealized with low and fluctuating coverage for many years (Ekouevi et al., 2018). The services are given at static level in health setup, and outreach program and national immunization days (Mbengue et al., 2017).

According to the guidelines developed by the World Health Organization, children are considered to have received all basic vaccinations when they have received a vaccination against tuberculosis, three doses pentavalent, polio vaccines, HBV vaccine and a vaccination against measles (Restrepo-Méndez et al., 2016). Various countries have specific strategies for reaching targeted coverage implementation of new approaches called reaching every district and sustainable outreach. The immunization coverage worldwide is below the target (Mutua et al., 2016; Hu et al., 2015). In Ethiopia, the routine immunization coverage has not reached targeted figures and planned objectives. Insufficient health personnel, lack of adequate health facilities, transportation shortage, high defaulter rate from schedule, missed opportunity, in adequate supplies are among major health problems identified as a cause or factors for low immunization coverage in Ethiopia and many countries (Negussie et al., 2016; Kassahun et al.,2015; Legesse et al., 2015).

Despite improvements world over in vaccine coverage in the last ten years, still there is regional and local disparities due to factors such as limited resources; competing health priorities; poor management of health systems and inadequate monitoring and supervision (Crocker-Buque et al., 2017). Therefore, community awareness creation programs, delivering health education, taking feedback from the mothers and involving the community members in the service delivery may enhance the service utilization (Mutua et al., 2016). Furthermore, continuous training of the health professionals is essential (Kiptoo et al., 2015, Adokiya, et al., 2017). The study was aimed at immunization coverage of 12-23 months old children in Areka Town, Sothern Ethiopia.

The sample size was determined using a formula for estimation of single population proportion with the following assumptions: 76% proportion ( Kassahun et al., 2015), Z a/2 is the Z value at 95% Confidence level (1.96) and 0.05 margin of  error  (d).  Adding  10%  for the non-response rate the final sample size was 301. A systematic random sampling method was used. The first household was selected by lottery method. Data were collected from every 8th households.

Each respondent was informed about the objective of the study and was assured of confidentiality. Each respondent briefly informed about having the right to stop the interview at any time they want. Pretesting was conducted using 5% of the total sample. Training and supervison were provided for the data collectors and the supervisors. Each questionnaire was coded and completeness of filled questionnaire was checked.

Data first were checked for completeness, and then each completed questionnaire was assigned a unique code. Subsequently, the data was entered using EpiData 3.1. The generated data were then exported to SPSS version 20. Finally the results were summarized and presented in texts, tables, and graphs.

A child who takes all vaccine and full dose according EPI schedule by age of 12 month.

A child who already started vaccination and still on vaccination process according to EPI schedule but not complete or default vaccination. 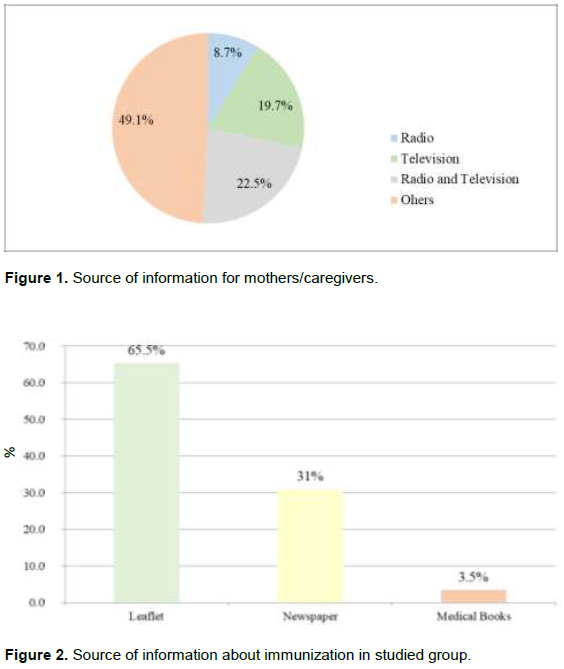 Knowledge of the vaccine preventable diseases 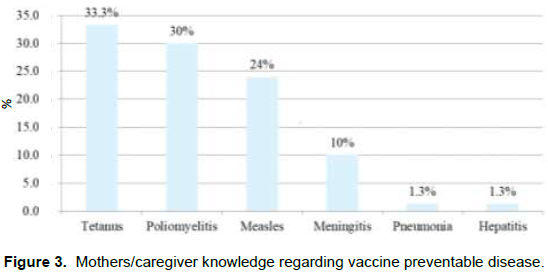 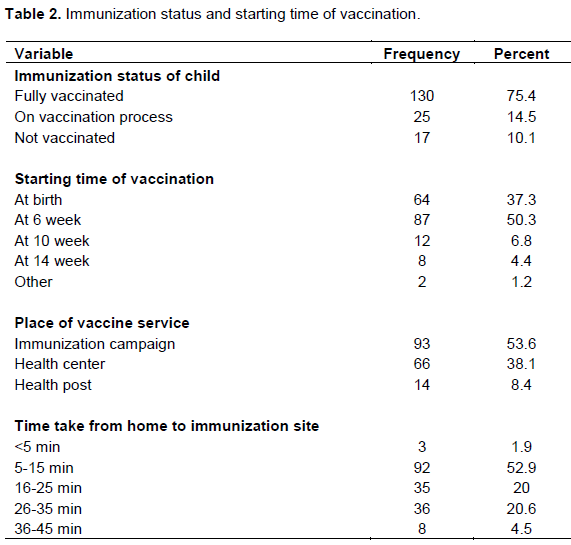 Twenty two (12.9%) of the children missed appointment day. Nine  (45%)  of  the respondents took the child to the health institution immediately when they remember that they miss the appointment. Nineteen (11%) returned due home without using the service. Twelve (61.1%) of them returned home due to the presence of many attendants. 13 (50%) of respondent had interrupted vaccine  program due to unawareness about the need to return the next dose. Thirty (17.4%) of the respondents reported that the children vaccinated had a problem during the vaccination period and 17(55.6%) experienced ulcer at the site of children  to  the  health institution  for treatment (Table 3). 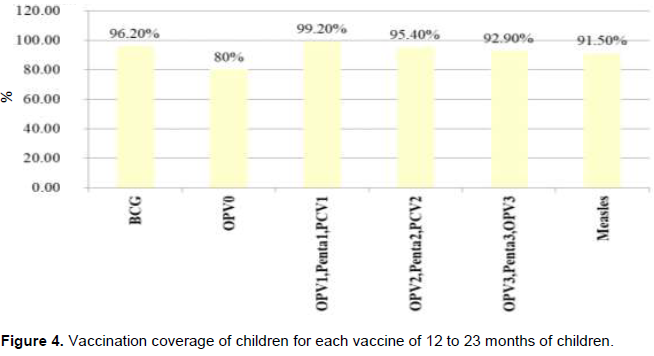 Furthermore, the finding is higher than a report from studies done in in Allahabad district 31% (Masood et al., 2011), 57% India (Shrivastwa et al., 2015), 65.4% Zimbabwe (Mukungwa et al., 2015) and hosanna 30.51% (Ayano et al., 2015). This might be due to the fact that in the study area immunization is currently delivered in the form of community outreach program which is supported by the health extension workers. Therefore, access to the service  increased.   In   addition,    health    education   is delivered to the community through the community based training programs.

In this study the overall drop out was 4.7%. This finding is comparable to a finding from a study conducted in Debre markos town, Amhara Regional State, Ethiopia which reported the overall dropout was 5% (Gualu et al., 2017). The finding is lower from a report from a study conducted in Bareilly District 37.3% (Joshi et al., 2011). This might be related to the difference in the delivery of the service in the two study areas. There might be a difference in the interventions applied to the increase the access to the immunization service. The difference in year at which the studies conducted might also contribute to the difference. Currently, due to increased provision of information and advancement of community engagement in the health care, the community is more likely to use the service.

In this study, among children aged 12 to 23 months 10.1% were not vaccinated. This is lower than a finding from a study conducted in Jigjiga District, Somali National Regional State, Ethiopia which reported that 25.4% of children were not vaccinated at all (Mohamud et al., 2014). The discrepancy might be due to a difference in study setting. The vaccination coverage is different in the study areas. According to a national report, in Somalia the vaccination coverage is only 22%. As compared to other vaccines coverage, the BCG vaccine was high. Accordingly, 96.2% were vaccinated for BCG. This could be due to the fact that it is administered at the time of delivery inside the health institution. There is a decrease in the vaccination coverage from BCG to measles in which only 91.54% children were vaccinated for measles. This could be due to lack of intention to use the service, far distance of health facilities and lack of continuous encouragement.

Only half of the children’s were fully vaccinated and majority was vaccinated during immunization campaign. The main written source of information for the mothers or caregivers was leaflets. Continuous support and health education should be provided at the community level. At individual level, frequent follow-up of a change in attitude and knowledge is essential. Especially the health promotion should focus on the returning of children for another dose of vaccination. Furthermore, health institutions should work to improve the quality of vaccination care.