Prevalence of helminthic fauna in wild pigs in comparison with domestic pigs: A study in the adjoining areas of Mudumalai, Anamalai and Sathyamangalam tiger reserves, Tamil Nadu South India 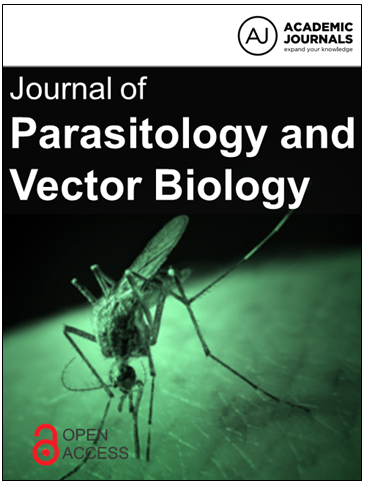 Study on endoparasites in wild pigs (Sus scrofa) interfering with agriculture, was carried out in areas adjoining the Western Ghats (Mudumalai tiger reserve, Anamalai tiger reserve) and Eastern Ghats (Sathyamangalam region) of Tamil Nadu state in India during November, 2013 to May, 2014. Ninety faecal samples in total (n=30 of Wild pigs, n=30 of Desi pigs and n=30 Cross bred pigs each of the study areas) were subjected to the parasitological examination using standard methods in wild pigs as well as in domestic pigs. Domestic pigs were involved to find the difference in the prevalence level between wild pigs and domestic pigs as there is a wide variation in their habitat. Prevalence of endoparasitic infections revealed the evidences of Ascaris suum, Trichuris suis, Strongyles, Strongyloides sp. and mixed parasitic infections comprising of Ascaris sp. with Trichuris sp., in addition to Strongyles with Strongyloides sp. The overall positivity of internal parasitic prevalence in wild pigs, desi pigs and cross bred pigs pertaining to Mudumalai, Anamalai and Sathyamangalam were documented, and differences among their prevalence data indicated an over-dispersed helminth distribution. These results indicate that populations of wild pigs although living under optimal conditions, are heavily affected by a burden of parasitic disease and some parasites are likely to limit population growth via a high mortality of piglets and infections throughout the lifespan of adults.