Currently, soil carbon storage is generally expressed as a mass of carbon per unit area as recommended by the Intergovernmental Panel on Climate Change (IPCC). In measurements of bulk density, care should be taken to avoid any loss of soil from the cores (Pearson et al., 2007). Bulk density is one of the most important parameters used to calculate soil organic carbon (SOC) storage (Xu et al., 2016). To obtain an accurate estimation of SOC stocks in the mineral soil or organic soil three types of variables must be measured: soil depth, soil bulk density, and concentrations of organic carbon within the sample (Pearson et al., 2007). The main reason for high uncertainty of soil organic carbon stock results from the difference in bulk density methods (Dawson and Smith, 2007; Xu et al., 2015). It is described as the weight of dry soil for a given volume. It is used to measure soil compaction. Several methods can be used to determine bulk density of soils although the most commonly practiced methods are core method and excavation method.From Dane and Topp (2002), obtaining an unbiased measurement of soil bulk density is difficult, and different methods of measurement for soil bulk density yield different results.
Therefore, selecting best estimator of bulk density is important for soil carbon stock estimation. Accurate SOC estimation results from improved sampling methods. Recent concern over the effects of small changes in soil organic carbon has been encouraged to evaluate the accuracy of methods for quantifying soil carbon (VandenBygaart and Angers, 2006). Additionally, different soil conditions, sampling equipment, or techniques can cause unintentional biases in depth measurements and the method as well (Wuest, 2009). Different methods of bulk density result in different SOC storage under different land use types. According to the study by Petrokofsky et al. (2012), soil carbon represents the largest carbon pool of terrestrial ecosystems, and has been globally estimated to have the largest potentials to sequester carbon. However, there are numerous challenges of soil organic carbon estimation. There is need to monitor small incremental changes in soil carbon content relative to large carbon pools, long-time periods to accrue the full carbon benefits, high local variability of soil carbon content, and relatively costly soil carbon measurement procedures. Moreover, bulk density is one of the most important parameters used to calculate SOC storage (Wiesmeier et al., 2012).
Palta et al. (1969) reported several methods (core method, mercury displacement method, kerosene saturation method, kerosene displacement using water as impregnating liquid, coating the soil clods with molten wax of 65 and 100oC, coating the soil clods with collodion, coating the soil clods with rubber solution of varying dilutions and excavation method) that have been used for determining bulk density. However, the most common used methods are core and excavation methods in and around the study area. As a result, there is a need to select unbiased and best method of bulk density from the common methods to have an accurate information of soil organic carbon stock measurement in the different land use types. According to Sakin (2012), very strong relationship was determined between soil organic carbon stock and soil textural groups. Moreover, few studies have focused on the effects of bulk density methods on soil organic carbon stock and the accuracy of the different methods worldwide. Best estimator method of bulk density gives good estimation on carbon stock. Therefore, the study quantitatively evaluates the SOC stock estimated from different methods of bulk density.

Study area
The study area, Gergera watershed, is situated in Atsbi-Wonberta District, Tigray regional state, Northern Ethiopia (Figure 1). It lies in the eastern part of Tigray, about 65 km North East of Mekelle, the regional capital of city of Tigray Regional State. Geographically, it is located between 39°30' to 39°45' E and 13°30' to 13°45' N. The total size of the watershed (study area) is an area of 2302 ha. Mean elevation of the watershed ranged from 2141 to 2859 meter above sea level, with minimum (2076) in crop land and maximum (2859) in exclosure. Farming system of the study area was dominantly subsistent involved on mixed crop-livestock production (Figure 2). Farmers of the study area do not integrate crop residues into the soil because of fuel wood and animal feed constraints, respectively. The study area experiences highly soil erosion and degradation through flooding and runoff from nearby exclosure, which is one of the main land degradation factors in the watershed. Livestock raring embraces cattle, sheep, goat and donkey. The main crops growing in the farming system were wheat (Triticum aestivum), maize (Zea mays) teff {Eragrostis tef), millet (Eleusine coracana), Faba bean (Viciafaba) and sorghum (Sorghum bicolor) with rotation year by year. 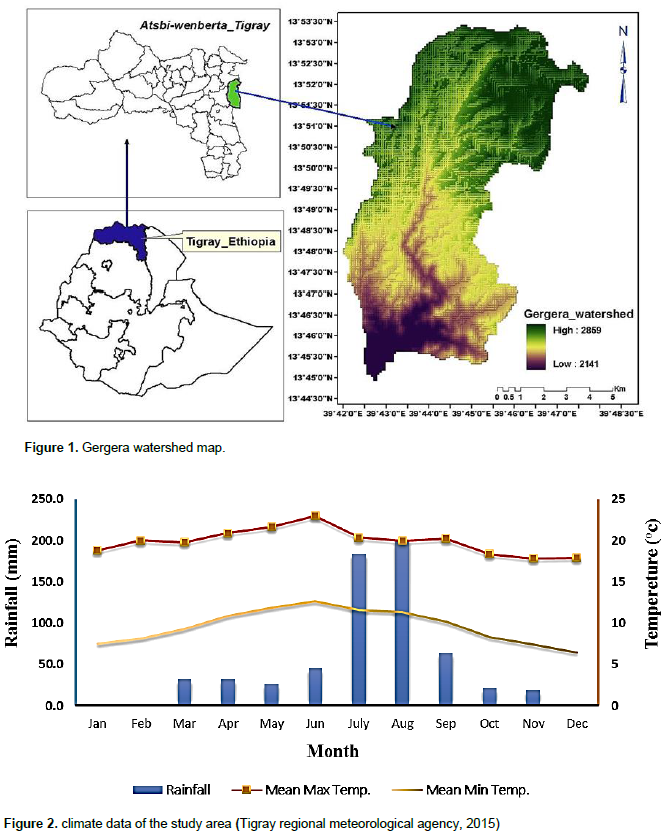 The soil type classification by its coverage in the study area is clay loam, loam, sand, sandy loam, silt and silt loam with total area of 25.8, 41.23, 741.1, 108, 1322.7 and 63.2 ha, respectively. The percentage was 1.08, 2.2, 32.19, 4.69, 57.45 and 2.74%, respectively. Some challenges in the study were climate change impacts like unseasonal heavy rainfall, rainfall interruption and others. The study area is faced with soil nutrient depletion due to continuous plowing of the cultivated lands. Continuous year by year application of chemical fertilizer may affect the soil structure and texture, not only on cultivated land but also on the other land use types; while repeated drought and weather fluctuation may damage the watershed. In the study area, governmental and non-governmental organizations have been working in the watershed to improve the livelihood standard of the community through climate smart agriculture.
Soil sampling methods
The time of soil sampling started from 12 October to 20 November, 2015. Soil samples were collected from exclosure, pasture land, homestead agroforestry, crop land and woodlot. Soil samples were taken from every sampling plot measured 20 × 20 m at each corner and center (Bajigo et al., 2015). A total of 75 representative soil samples were collected from soil depth (0 to 30 cm) (IPCC, 2006) on each land use types; 15 plots from the 75 experimental plots were taken out and mixed together in order to have approximately 1 kg composite sample. Soil samples for chemical analysis were air dried under shade, ground using pestle and mortar and sieved to pass through 2 mm to obtain fine fractions (Yitaferu et al., 2013). Undisturbed soil samples were also collected from the same plots of the land use types using core method and disturbed excavated method for determination of bulk density from each 75 soil samples.
Core method
Five land use types were selected in Gergera watershed, Tigray, Ethiopia for soil bulk density measurement. Using core method, soil samples were collected using a core sampler made from 5 cm height and 5 cm diameter metal cylinder pressed into the soil. The cutting edge was sharpened without disturbing the height of core. The cylinder is removed, extracting a sample of known volume which is 98.12 cm3. The moist sample weight is recorded. The sample is then dried in an oven and weighed. A total of 75 plots of undisturbed soil sample were collected from five land use types, 15 plots each (exclosure, homestead agroforestry, pasture land, crop land and woodlot) were taken from the land use types using core sampler for determination of bulk density. While taking cores for measurements of bulk density, great care was taken to avoid any loss of soil from the cores. The weights of dry mass of soil sample were determined after oven dried at 105°C for 24 h (Hunde, 2015; Kuyah and Rosenstock, 2015), till no further changes in weight occurred.
Procedures
(1) Carefully dig up to 0 to 30 cm then drive cylindrical core ring (5cm*5cm) horizontally in the middle of 0 to 30 cm that is, 12.5 to 17.5cm.
(2) Weigh the empty cylindrical core sampler.
(3) Remove excess soil from the bottom of cylinder core sampler with knife as shown in Figure 3 and if not full, an independent measurement must be made to the volume of core sampler so as to measure accurate volume of soil.
(4) Close and pack the soil fill core sampler, label further sampled soil by known weight of the core sampler and record its total fresh weight.
(5) The packed soil fill core sampler was transported to the soil laboratory, oven dried at 105°C for 24 h (Hunde, 2015; Kuyah and Rosenstock, 2015), till no further changes in weight occur.
(6) Place a metal on each soil fill core sampler and carefully place in a plastic bag.
(7) Weigh the dry and undisturbed soil sampled by core sampler.
(8) Then bulk density is calculated by dividing the dry mass to the volume core sampler. 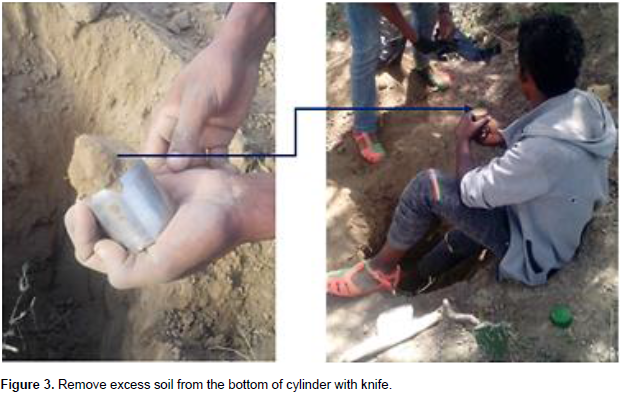 Excavation method
The excavation method entails digging a pit that is wide enough to collect the soil to the depth desired (Pearson et al., 2007) which is at least 0-30 cm in five land use types. A hand shovel can be used to collect material. It is important to collect material from the entire depth to avoid biasing the sample. Uniform rings were used to sample the sides of the pit for bulk density. Bulk density is determined on both the total soil and fine fraction (<2 mm). The fine fraction bulk density is critical when converting to carbon balance studies in soils with high coarse fragment content, since usually only the fine soil fraction is analyzed for carbon. The main disadvantage of the excavation method is more labor-intensive than simple coring. This method requires one to sieve out the course fragments greater than 2 mm in size, retain and weigh the weights recorded and deducted from the volume of the core.
Procedures
(1) Record empty core weights (CW).
(2) Prepare flat surface and dig a deep hole at required depth in sampling pit
(3) Press or drive core sampler into soil horizontally
(4) Take soil sample using known height and diameter core sampler; in this case take six times (Figure 4) in each five cm of 0-30 cm and place all sampled soil in a plastic bag.
(5) At the laboratory, remove the soil from the plastic bags and air dried the soil then sieve the soil (breaking up the soil clumps only) to <2 mm fraction.
(6) If sample contains rock fragments > 2 mm, dry and weigh the rock fragments that are retained on the sieve (Figure 5). Record weight of rock fragments (RF). Determine density of rock fragments (PD).
(7) Oven-dry the <2 mm soil at 105°C for 24 h.
(8) Weigh the <2 mm fraction of soil
(9) Measure and record cylinder volume (CV)
(10) Determine the oven-dry weight of the sample and calculate bulk density. 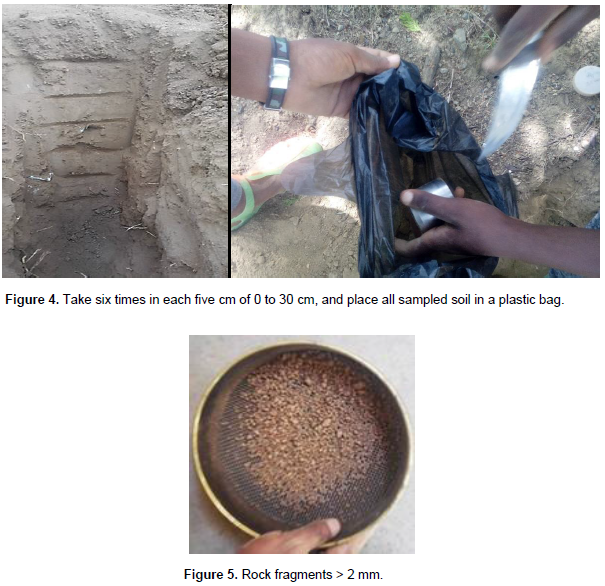 The author declare that there is no conflicts of interest.