A cross sectional active and retrospective abattoir survey was undertaken from November 2013 to April 2014, on cattle slaughtered at Dessie municipal abattoir with the aim of identifying the major causes of organ condemnation, risk factors for organ condemnation and estimating the financial loss attributed to the condemned organs in cattle slaughtered at Dessie municipal abattoir, North-East part of Ethiopia. Of the total 768 examined animals, abnormalities were detected in 82 (10.68%) during ante mortem inspection and 430 (55.99%) were animals from which organ condemned during postmortem inspection. From the total cattle slaughtered, 311 (40.49%) livers, 142 (18.49%) lungs, 39 (5.08%) kidneys, 34 (4.43%) hearts and 6 (0.78%) tongues were condemned due to various causes. Hydatidosis (22.13%), fasciolosis (20.18%) and cirrhosis (8.85%), hepatitis (4.43%), pneumonia (3.25%), abscess (2.6%), pericarditis (2.08%), edema (1.82%), hydronephrosis (1.43%), nephritis (1.04%) were the major identified causes from the lesions responsible for the rejection of organs. Statistically significant difference in organ condemnation rate was found between age (p = 0.000), body condition score (p = 0.000) and origin (p = 0.013) of animals. However, there was no statistically significant difference between the two breeds although there was higher condemnation rate of organ in cross breed cattle. In the study, fasciolosis and hydatidosis were the major causes of organs condemnation. The direct financial loss from organ condemnation due to various reasons was estimated to be 122,617.70 Ethiopian Birr (6,288.08 USD) per annum. Hence, commencement and implementation of prevention and control measures are must so as to secure from the financial loss they cause.

Ethiopia has large livestock population in Africa with an estimate of 44,318,877 cattle, 23,619,720 sheep, 23,325,113 goats, 6,000,000 equines, 2,300,000 camels and 43,000,000 poultry (CSA, 2008). Hence, an increase in cattle production could contribute to  the  attainment  of food self-sufficiency in the country particularly in response to protein requirement for the growing human population as well as to enhance the export earnings (FAO, 2007). Abattoirs played an important role in examined for unusual signs, lesions or  specific  diseases surveillance of various diseases of human and animal health importance. Surveillance at the abattoir allows for all animals passing in to human food chain to be (Chhabra and Singla, 2009 and Alton et al., 2010). Monitoring and other conditions at slaughter has been recognized as one way of assessing the disease status of herd, however this source of information is not fully exploited worldwide (Mellau et al., 2010). Abattoir data is an excellent option for detecting diseases of both economic and public health importance (Abunna et al., 2010). Abattoir data can be a source of valuable information on the incidence and epidemiology of animal diseases conditions, to estimate the financial losses incurred through condemnation of affected organs (Raji et al., 2010). An important function of meat inspection is to assist in monitoring diseases in the national herd and flock by providing feedback information to the veterinary service to control or eradicate diseases (Gracey et al., 1999). The main causes of organ condemnation during postmortem inspection are diseases originated by parasites, bacteria and viruses. Flukes in liver and hydatid cyst in lung, liver and kidney, are mainly involved (Mezegebu, 2003). In Ethiopia, many studies have been undertaken to identify the major disease conditions encountered during ante mortem and postmortem inspection and to determine the economic importance of organ and carcass condemnation. Fasciolosis, hydatid cyst, Cysticercus bovis, pneumonia, emphysema, hydronephrosis, cirrhosis, hepatitis, calcification and abscessation were the major causes of organs condemnation in cattle slaughtered at Adigirat municipal abattoir (Alembrhan and Haylegebriel 2013; Singla and Juyal 2014). Genet et al., (2012) from Gonder ELFORA abattoir reported the financial loss due to edible organ and carcass condemnation to be 21,565,849 Ethiopian birr per annum. Fasciolosis and hydatidosis were the major causes for condemnation that led to huge economic losses. By another author, an annual direct financial loss of 154,850.22 Ethiopian birr was estimated in Gondar ELFORA abattoir due to condemnation of edible organs (Yifat et al., 2011). Amene et al., (2012) reported that an estimated average amount of 172,664.09 ETB was lost annually due to organ condemnation of cattle at Jimma Municipal abattoir. Of all the losses, liver condemnation has accounted for the higher proportion (92.7%). Similar economic loss analysis by Fasil, (2009) showed annual economic loss of 150,048.98 ETB at Gondar Municipal abattoir. Another report in cattle slaughtered at Mekele municipal abattoir revealed an estimated annual economic loss of 222,884.58 ETB. Most of the studies conducted in Dessie municipal abattoir have focused only on specific diseases such as fasciolosis and hydatidosis. As a result of this, there is no complete information about causes of organ condemnation at Dessie municipal abattoir. In line with this, it would be essential to have comprehensive information  on   occurrence   of   various   diseases   and causes of organ condemnation and their financial loss to establish appropriate strategy for prevention and controls. Therefore, the objectives of this study were to identify the major causes of organ condemnation, to identify risk factors for organ condemnation and to estimate the direct financial loss attributed to the condemned organs in cattle slaughtered at Dessie municipal abattoir.

Study area
The study was conducted from November 2013 to April 2014 at Dessie Municipal abattoir. The animals were brought from different areas (Tewuledere, Dessie Zuria, Kutaber and Tenta). Tehuledere is located at the eastern edge of the Ethiopian highlands in the Debub Wollo Zone and the altitude of Tehuledere ranges from 500 meters above sea level along the boundary with the Debub Wollo Zone to 2700 meters along its southwest border. Dessie is the capital of South Wollo Zone situated at the North-east part of Ethiopia at a distance of about 400 km away from Addis Ababa the capital of Ethiopia. Dessie is located at 11 08' North latitude and 39 38' East longitudes and has an elevation of about 2600 meters above sea level. The area gets 936 to 1070 mm Hg rainfall annually. The mean monthly minimum and maximum temperatures are 12.37°C and 26.27°C, respectively (DFEDB, 2007).
Study population and sample size determination
Study population
The study population constitutes of local and cross breed cattle originating from different localities and districts around the town; Tewuledere (midland), Tenta (midland), Dessie Zuria (Highland) and Kutaber (Highland). The majority of animals slaughtered were local breeds and age wise adult animals took the greater proportion.
Sampling and sample size determination
Systematic random sampling technique was used to select the animals to be included in the sample. The required sample size was calculated based on the expected prevalence of 50%, absolute desired precision of 5% and at confidence level of 95% according to the formula provided by Thrusfield, (2005). However, to increase the precision, the sample size was doubled consequently. The total sample size taken for the study was 768 cattle.

In active abattoir survey, each week  four  days  visit  was  done  for ante mortem and postmortem examination of slaughter animals.
Study design
The study conducted was basically cross sectional type based on active abattoir survey. Three year retrospective data from the abattoir was also used to estimate the financial loss due to organ condemnation.
Active abattoir survey
Ante mortem examination
During ante mortem examinations, identity tag numbers were given to the selected animals and relevant information including origin (Tehuledera and Tenta as midland while Dessie Zuria and Kutaber Highland), physical condition and health status were recorded. Body condition score of the sample animals were measured and standard grades given as described by Nicholson and Butterworth, (1986). The judgment have also been passed based on the procedure given by FAO, (2007).
Postmortem examination
Postmortem examination was conducted by visualization, inspection, palpation and systematic incision of each visceral organ particularly the liver, lung, heart and kidney for the presence of cysts, various adult parasites and other abnormalities (Gracy, 1999). The pathological lesions were differentiated and judged based on meat inspection guidelines (FAO, 2007).
Assessment of direct financial loss
The total direct financial loss due to organ condemnation was computed or determined by using the condemnation rate of each edible organ that has been determined by this study, the average annual slaughter capacity of the abattoir from three year retrospective data and average current local market price of major organs. Average current local market price of each organ and carcass was collected by questionnaire from the butcheries in Dessie town for ease of computing the loss. Consequently the total financial loss was calculated by the following formula set by Ogunrinade and Ogunrinade (1980).
EL = ἑsrk X Coy X Roz
Where  EL - Estimated annual economic loss due to organ/carcass condemnation from international/domestic market, Srx - Annual cattle slaughter rate of the abattoir, Coy - Average cost of each liver/lung/heart/kidney/tongue. Roz - Condemnation rates of liver/lung/heart/kidney/tongue
Data management and analysis
Collected data was entered into Microsoft excel and summarized by descriptive statistical methods like percentage and proportion. Then data was also analyzed by using version 20 of SPSS software. The results of this study were considered statistically significant when P value is less than 0.05. 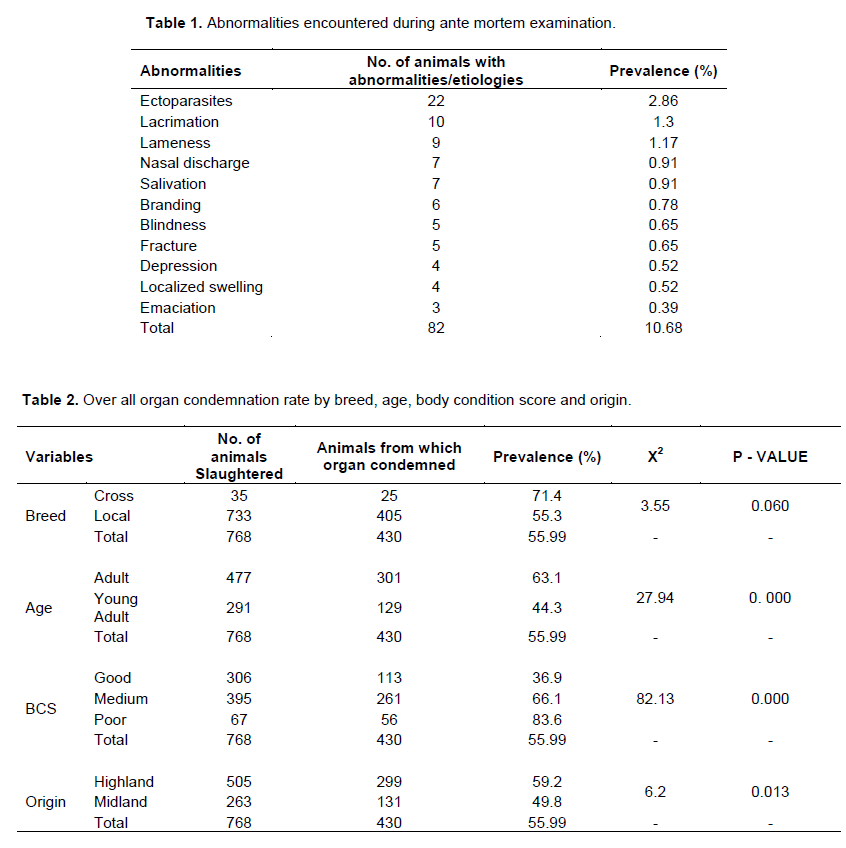 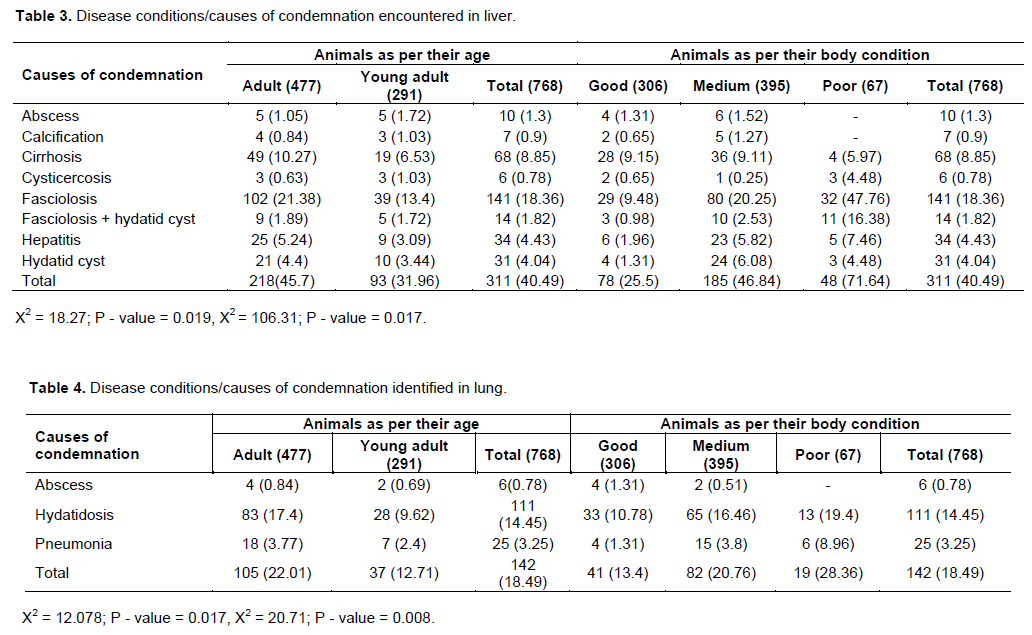 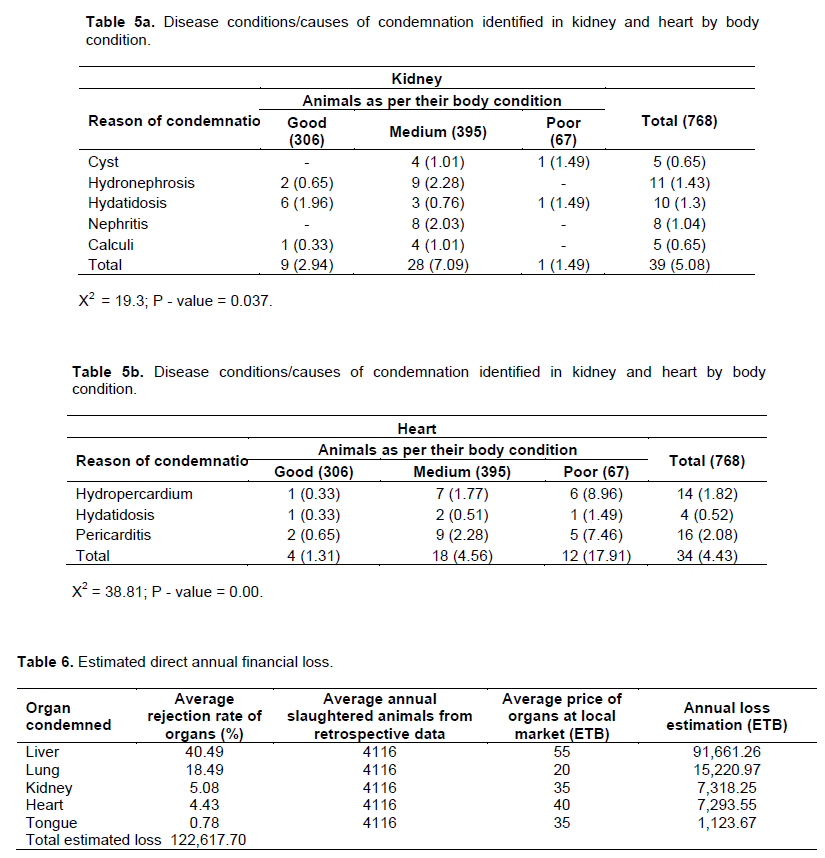 In accordance with the results of this study, fasciolosis, hydatidosis, pneumonia, Abscess, pericarditis and hydronephrosis were the major causes for organ condemnation. There was higher overall organ condemnation rate in adult than in young adult, poor body condition animals than the other body condition score categories and in animals from highland than midland origin and this difference was statistically significant. The organ condemnation rate determined by this study incurred in substantial financial loss which is about 122,617.70 ETB per annum. Hence, this study is valuable for the country by providing information on disease conditions most frequently occurring in the study area and organs condemned by those lesions/disease conditions which have public health hazard and aesthetic value. Therefore, further studies should be conducted especially in assessing the indirect losses.