Fasciolosis is a parasitic disease caused by either Fasciola hepatica or Faciola gigantica. These parasitic infections are of global significance causing diseases in different mammalian species including humans. In this study, the prevalence and economic significance of Fasciolosis in cattle slaughtered at Gondar Elfora abattoirs was assessed. A total of 400 cattle were examined and 85 cattle (21.2%) were affected by fasciolosis. This findings indicated that, the prevalence of cattle fasiolosis is significantly affected by the age of the animals (P < 0.05), where young animals (27.7%) were more affected than the adult ones (17.1%). Body conditions disclosed a significant relation with Fasciola infection. Poor body conditioned animals showed the highest prevalence (30.8%) followed by medium (19.5%) and good body conditioned animals (17%). There were statistical significant differences between the different geographical locations. Highest prevalence of fasciolosis was exhibited in animals originated from Dembiya (50%) followed by Debarq (31.6%), Wogera (15%), Gondar zuria (13.5%), Belesa (12.9%), Dansha (11.9%) and Metema (4.7%). As recorded, due to cattle fasciolosis livers were condemned for human consumption. Thus, based on retail value of cattle liver, the direct economic loss from fasciolosis in Gondar Elfora abattoir was estimated to be 63,600 Ethiopian Birr (2316.948 USD) annually. In conclusion, cattle fasciolosis is one of the major parasitic diseases in the study area. Therefore appropriate control measures should be designed and implemented so as to reduce financial losses that may occur from organ condemnation and loss of animals from the disease.

Ethiopia is rich in livestock and believed to have the largest livestock population in Africa. The central statistical agency report indicated the total cattle population of the country which is estimated to be about 59.5 million, female (55.5%) and male (44.5%). The sector has been subsidizing a significant portion to the country economy and still promising to rally round the economic development of the country (CSA, 2017). Despite the presence of this huge livestock population, Ethiopia is not exploiting its livestock resources as expected due to a number of factors such as animal diseases, recurrent drought, infrastructures problem, rampant animal diseases, poor nutrition, poor husbandry practices, shortage of trained man power and lack of government policies for disease prevention and control (ILRI, 2009). Among the animal diseases that affect animal health, parasitic infections have a great economic impact particularly in developing countries. Fasciolosis is of the parasitic diseases of domestic livestock caused by Fasciola hepatica and Faciola gigantica, commonly called liver flukes that are the most important trematodes afflicting the global agricultural community (Cwiklinski et al, 2016; Deepak and Singla, 2016; Andrews, 1999). Fasciolosis is a neglected tropical disease having both economy and zoonotic importance usually affects poor people from developing countries (Mas-Coma et al., 2014). It has been estimated that, at least 2.6 million people are infected with fasciolosis worldwide (Fürst et al., 2012). In Ethiopia, this disease is endemic in most part of the country long time ago as reported by several workers such as Graber, (1978), Goll and Scott (1978), Fufa et al. (2010), Yilma and Mesfin (2000), and Tolosa and Tigre (2007). Although many surveys were conducted, the case is still economic and public health issue. This study assesses the current status of fasciolosis, economical loss due to liver condemnation and identifies associated risk factors for the occurrence of faciolosis in cattle slaughtered at Elfora abattoir enterprise, Gondar, Ethiopia.

Description of the study area
This study was carried out on 400 slaughtered cattle at Elfora abattoir; Amhara regional state, Northwest Ethiopia, from November 2016 to May 2017. Gondar town is located 739 Km away from Addis Ababa at an elevation of 2,220 m above sea level. The town is aligned on latitude of 12°36'N 37°28’E and longitude of 12.6°N37.467°E. Rain fall varies from 880 to1172 mm with the average annual temperature of 20.3°C (Shewangzaw and Addis, 2016).
Study animals
This study was conducted on 400 slaughtered male cattle brought from different areas nearby Gondar town. The cattle come mainly from Dembiya, Metema, Debarq, Belesa, Dansha, Gondar zuria and wogera.
Study design and sample size determination
A cross-sectional research was done to conduct this study and systematic random sampling technique was used to select appropriate samples. The sample size was determined according to the formula given by Thrusfield (2005). Previous study conducted by Mulat et al. (2012) shown the prevalence rate of 29.75% cattle fasiolosis in the same abattoir. Hence, using 29.75% as expected prevalence and 5% absolute precision at 95% confidence level, the number of sampled animals needed in the study was 320. However, to increase the level of precision and accuracy of the data, the study was carried out on 400 cattle.
Ante-mortem examination
Ante-mortem examination was conducted in lairage, before slaughtering of animals according to Gracy et al., (1999) recommendation. Risk factors such as age, origin and body condition of individual animal were identified and recorded. Body condition for each cattle was estimated based on Nicholson and Butterworth (1986) ranging from score 1 (emaciated) to 5 (obese). Therefore, in this study three classes of scoring which include poor (Score 2), medium (Score 3 and 4) and good (score 5) were used. No animals were slaughtered at score 1. The age of the animal was estimated on the basis of dentitions (Cringoli et al., 2002).
Post mortem examination
The liver of each study animal was carefully examined externally for the presence of lesions suggestive of Fasciola infection and incised for further confirmation. Liver flukes were detected by cutting the infected liver into fine, approximately 1 cm slices with a sharp knife. Investigation and identification of Fasciola species was done according to their distinct morphological characteristics following the standard guidelines given by Urquhart et al. (1996).
Direct economic loss assessment
All fasciola infected livers were considered to be unfit for human consumption and if any liver was infected by Fasciola at the Gondar Elfora abattoir, it was totally condemned. Therefore it was analyzed by considering the average number of annually slaughtered cattle in the abattoir from retrospective recorded data, the mean selling price of one liver at Gondar town and the prevalence of fasciolosis in the present study (21.2%). The average market price of one liver at Gondar town was taken as 50 Ethiopian birr. The mean number of cattle slaughtered in this municipal abattoir was 6000 per year which depends on two years recorded data economic losses, calculated based on condemned livers due to fasciolosis. The estimated annual loss from condemned liver was calculated according to mathematical computation using the formula set by Ogunrinade and Adegoke (1982)

Where:
ALC = Annual loss from liver condemnation,
CSR = mean annual cattle slaughtered at Gondar Elfora abattoir,
LC = mean cost of one liver in Gondar town and,
P = Prevalence of bovine fasciolosis at Gondar Elfora abattoir.
Data management and analysis
All data collected was stored in Microsoft excel spreadsheet for statistical analysis and was analyzed using statically package of social science (SPSS) software version (20.0), to determine the prevalence of cattle fasiolosis and significance of associated risk factors. Association between the variable and the distribution of observed lesion in slaughtered cattle was determined using Chi-square test at critical probability value of p<0.05. 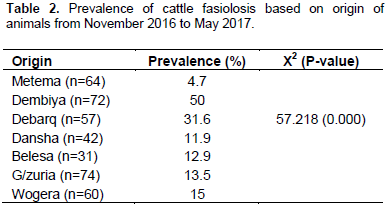 Prevalence based on age
Young cattle were highly affected (27.7%) by cattle fasciolosis. As presented in Table 4, there was a statistical differences between young and adult cattle (P=0.012).

Fasciolosis is an important zoonotic disease that is responsible for a significant loss in food resource and animal productivity (Jaja et al., 2017). Cattle are less susceptible to showing clinical signs of fasciolosis as compared to small ruminants (Stella et al., 2017). Therefore, cattle fasciolosis mainly exhibits as a subclinical chronic disease, associated with hepatic damage and blood loss caused by parasites in the bile ducts (Kaplan, 2001). Hence, cattle fasciolosis is of significant economic importance as the resultant liver condemnations need serious consideration in abattoir industries (Abunna, 2010). The results of the present study publicized that; origin, body condition and age of the animals have significant effect on the prevalence of cattle fasciolosis. The overall prevalence of bovine fasciolosis (21.25%) in the current study was supported by other abattoir-based studies conducted in different parts of Ethiopia such as Alemu and Mekonnen (2013) (22.14%) from Dangila municipal abattoir, Asressa (2011) (24%) from Andassa livestock research center and Berhe et al. (2009) (24.3%) from Mekelle. In contrast to studies such as Mulat Nega et al. (2012), 29.75% was reported from Gondar Elfora abattoir and Yilma and Mesfin (2000) (90.7%) was conducted in Gondar Municipal abattoir; the overall prevalence record in this study was lower. In the current study, the variations in prevalence rate which based on the origin of animals were probably due to epidemiological factors such as snail population, as a result of favorable conditions. For instance, the occurrence of bovine fasciolosis in Dembiya was the highest and this might be due to the availability of more appropriate environmental conditions such as watershed areas, slowly flowing waterways and lakes like Lake Tana. These factors will create ideal conditions for the occurrence of fasciola infection.
The statistical significance difference between the age groups in this study might be the fact that, young animals are more susceptible to different disease because of poor immunity development and lack of adaptation (Gebremeskel et al., 2017). In this study, the prevalence rate was higher in poor body conditioned cattle than other body condition scores. Different studies revealed the relationship between body conditions and fasciolosis has shown that there is a positive association between fasciolosis and cattle weight loss (Jaja et al., 2017). It is known that animals in good intensive management systems and with adequate veterinary care should be in better body condition than cattle extensively managed with little veterinary services (Jaja et al., 2017). Therefore, types of management system and veterinary services correlate with cattle fasciolosis. The direct economic loss due to liver condemnation in Gondar Elfora abattoir was closely related with the earlier records of Bekele et al. (2010) (57,960.00 Ethiopian birr) (ETB)) from Adwa and Bekele et al. (2014) (88,806.85 ETB) from Hosanna. These variations in financial loss due to liver condemnation might be as a result of difference in the prevalence of fasciolosis among different study site, period and price of a liver.

Fasciolosis is one of major problem for livestock development in the study area by inflicting direct economic losses and its occurrence closely linked to the presence of environment suitable to the development of snail intermediate host. As reported by the current study, there was a high cattle fasciolosis in the study area. Statistical significant differences were recorded between the risk factors investigated. Therefore, based on the findings we recommend integrated approach with a combination of chemotherapy. Vector control should be considered more practically and economically, control strategies targeted on the parasite and the intermediate hosts as well as implementation of appropriate grazing management in the study area are warranted due to, the reduction in the risk of infection by planned grazing management especially during high outbreak months by the application of zero grazing (Cut and carry). Farmers who rear cattle should be aware of how to improve feeds to their animals so that the animal can have good body condition that confers some level of resistance against fasciolosis.