Congenital anomalies of gastro intestinal tract occurs among different species of animals with an incidence of about 4.3% (Leipold et al., 1971).

Atresia ani is a developmental anomaly of the new born which occurs as a result of an autosomal recessive gene (Bademkiran et al., 2009). This condition is characterized by absence of anal opening and may be associated with recto-vaginal fistula, recto-cystic fistula, vagino urethral agenesis, taillessness, hypospadias (Singh et al., 1993) and diphallus (Loynachan et al., 2006). Recto-vaginal fistula or anus vaginalis is an inherited lethal  abnormality in which there is an abnormal passage between rectum and vagina; also, feaces are passed through the vagina as a result of the imperforate anus (Oehme and Prier, 1974). Atresia ani associated with recto-vaginal fistula has been  reported in many species. These include calves (Shakoor et al., 2012; Mahesh et al., 2014 ), lambs (Kamalakar et al., 2014, 2015), dogs (Rahal et al., 2007) and pigs (Monsang et al., 2014).

These anomalies are usually noticed at birth whereas in some cases, usually diagnosed at a later age. Early diagnosis   of   non-lethal   anomalies   aids   in    efficient management of the condition.

There are four major types of atresia ani which consists of type I-IV. In type I, a mucosal barrier obstructs the lumen of the intestine. Animals with type II have an intestine with two segments without any communication usually with a fibrous cord joining them together. In type III, two segments of intestine separated completely which may be coiled at the distant end in some animals. Type IV atresia involves multiple site of atresia (Bademkiran et al., 2009 ; Rahal et al., 2007). Congenital rectovaginal fistula usually associated with type II atresia ani in which the rectum ends as a blind pouch immediately cranial to the imperforated anus (Rahal et al., 2007).

Complete blood count was conducted so as  to  ascertain whether the animal is anemic or not; ascultation of the heart and lungs was done to know the status of the cardiopulmonary system, whether or not the animal can withstand both aesthesia and surgery. Unfortunately, ultrasound scan was not done to know the type of atresia ani we were dealing with and lastly, reconstructive surgery was performed to correct the condition. 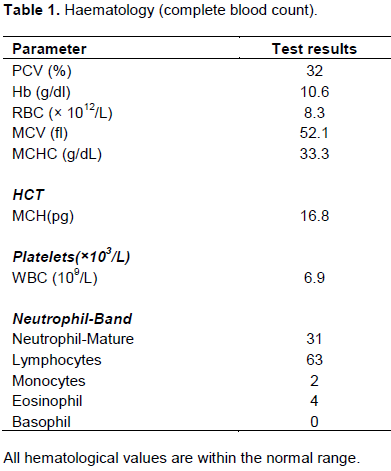 The rectum and vagina were evacuated of feaces, the perineum was shaved and prepared for aseptic surgery (Figure 1). Fluid therapy using 5% normal saline was instituted. Anesthesia was effected with xylazine at 0.084 mg i.m. and local infiltration of the perineum using 20% lignocaine hydrochloride. The animal was placed on lateral recumbency and a cruciate skin incision was made on the skin at the bulging area. The rectum was opened and the contents were evacuated. The fistulous orifice, which was about 3 cm in diameter and 2” away from anus, was reached through anal route and was closed using simple interrupted suture pattern with chromic catgut size 0/2 (Figure 2). The area was irrigated with normal saline and rectal mucosa was sutured to  the  skin in simple interrupted pattern using black braided silk. A sterile 20-mL syringe barrel (Figure 3) was cut at non winged end and two holes were made at the centre of each wing. The non-winged end was lubricated with liquid paraffin and inserted into rectum in other to hold the rectum tightly to the skin, to avoid closure through healing. The wings of barrel were secured to the perineal skin by passing nylon suture material from skin through hole in that side wing and tied to outside using simple interrupted sutures. 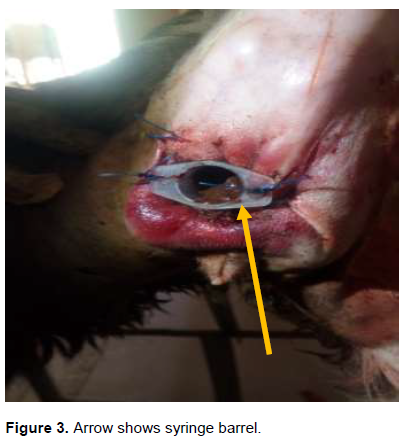 The animal fully recovered 90 min after the surgery and stood on its entire limbs (Figure 4). After another 90 min, a rising appetite was noticed, hence small quantity of feed (wheat bran) was provided. After 24 h, normal defecation even though softer than normal was noticed, which may be due to the wheat bran. 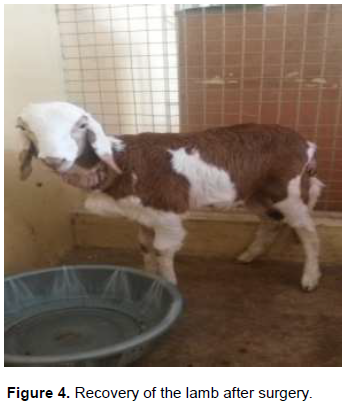 Post operatively, 5% dextrose for rehydration, procine penicillin with streptomycin was given at 9 mg/kg × 3/7. Diclofenac sodium was given at 3 mg/kg × 3/7 as an analgesic. The animal was fed wheat bran continuously for 7 days at the Veterinary Hospital so that it could pass out soft feaces and for monitoring, should there be any complication.

Atresia usually arises during the embryonic period which results from autosomal recessive gene (Loynachan et al., 2006). Though environmental teratogens, plant toxins and some viruses (Loynachan et al., 2006) are recognised complicating factors in calves. In  the present case, the reason could not be ascertained and unspecific as reported by Johnson et al. (1980). The increased faecal pressure may have caused an abnormal opening between rectal wall and vagina forming recto-vaginal fistula and thus causing defecation via vulva (Norrish and Rennie, 1968). Atresia ani is frequently associated with recto-vaginal fistula between dorsal wall of vagina and ventral wall of terminal rectum. A clinical sign is mainly the absence of anal opening; however, while Amith et al. (2017) reported tenesmus, abdominal discomfort in a 5- day old lamb, Prasad et al. (2016) did not report such clinical signs in a 3-day old lamb. Tenesmus, abdominal distension, abdominal discomfort was equally not observed in this present study, which means there are variations in clinical signs regardless of age. Furthermore, radiographs are considered important to determine the position of the fistula and to differentiate the four types of congenital atresia ani (Rahal et al., 2007). However, in our present case, the defects were rectified individually as reported by Rahal et al. (2007).